Travelling in Scotland - Outlander the series

The grass is always greener... in Scotland! It really is amazing how beautiful the nature in Scotland is.

Normally Mark and I always travel together, but this time it was sister-time and together we made a roadtrip through Scotland. 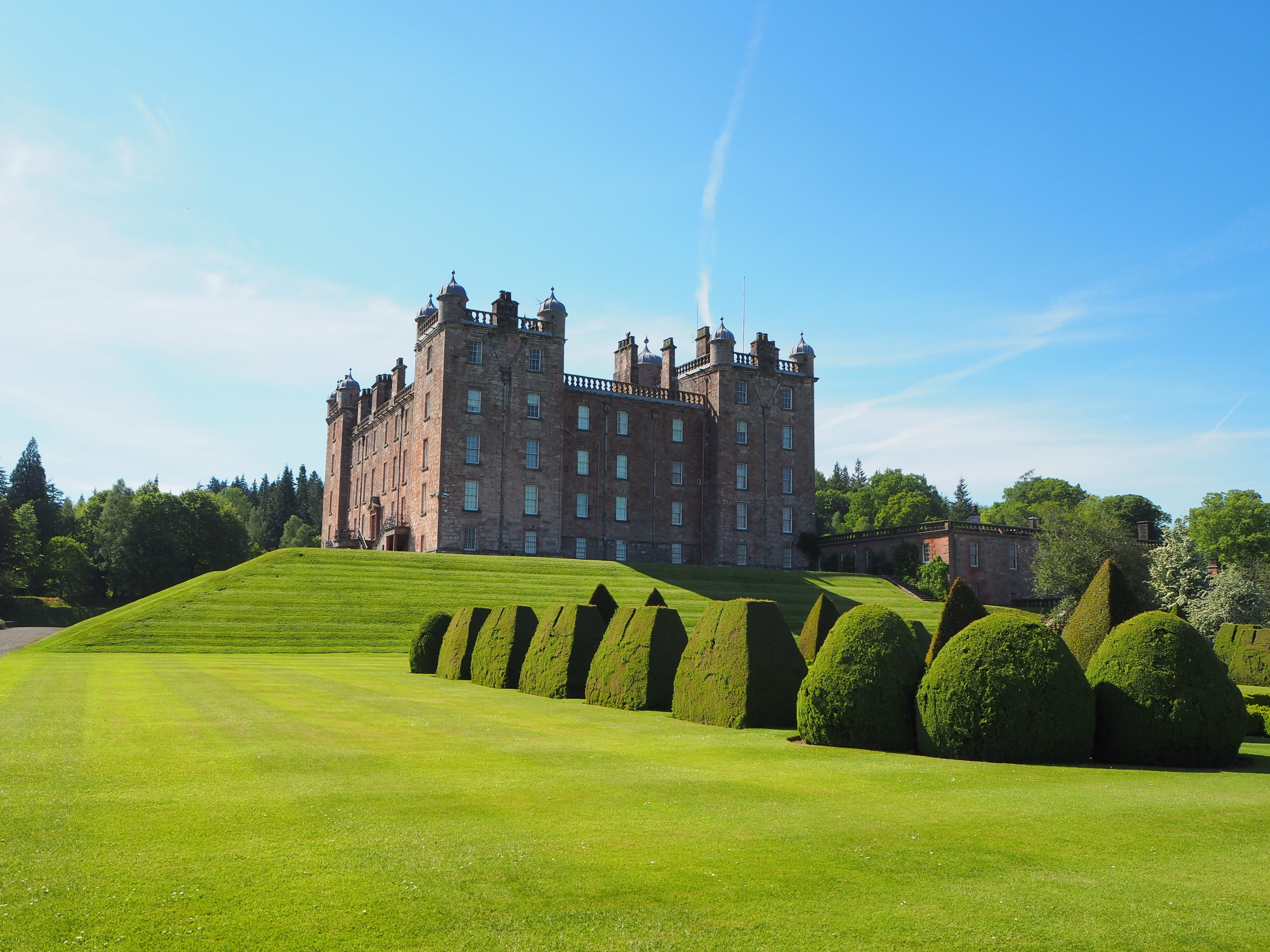 We are both huge fans of the Outlander serie and have seen both seasons on Netflix. We loved it! And Jamie as well ;)

For all of you who don't know Outlander, it is a series based on the historical Outlander series of novels by Diana Gabaldon. The serie follows the story of Claire Randall, a married combat nurse who is mysteriously swept back in time from 1945 to 1743, where she is immediately thrown into an unknown world where her life is threatened. When she is forced to marry Jamie Fraser, a chivalrous and romantic young Scottish warrior, a passionate relationship is ignited that tears Claire's heart between two vastly different men in two irreconcilable lives. (source: IMDB) Outlander made us go to Scotland and it is even more beautiful than we thought it would be. In the serie they show a lot of the history of Scotland and how beautiful this part of Britain is. In real life it exceeded our expectations! We have seen so much beautiful castles and historic villages.

For all the Outlander fans at Steemit, I will give some great locations in Scotland where they filmed for this series. For all the non fans I hope I'll give you some reasons to start watching this series and to visit Scotland.

On this great site you can find a lot of information about Scotland and also Outlander:
https://www.visitscotland.com/see-do/attractions/tv-film/outlander/

I found a map where all the outlander filming locations where pointed out. So a plan for our roadtrip was made! Along the route we visited a lot of places and it was so cool to recognize it from the series. Here is a list with some of the places that we've been to. 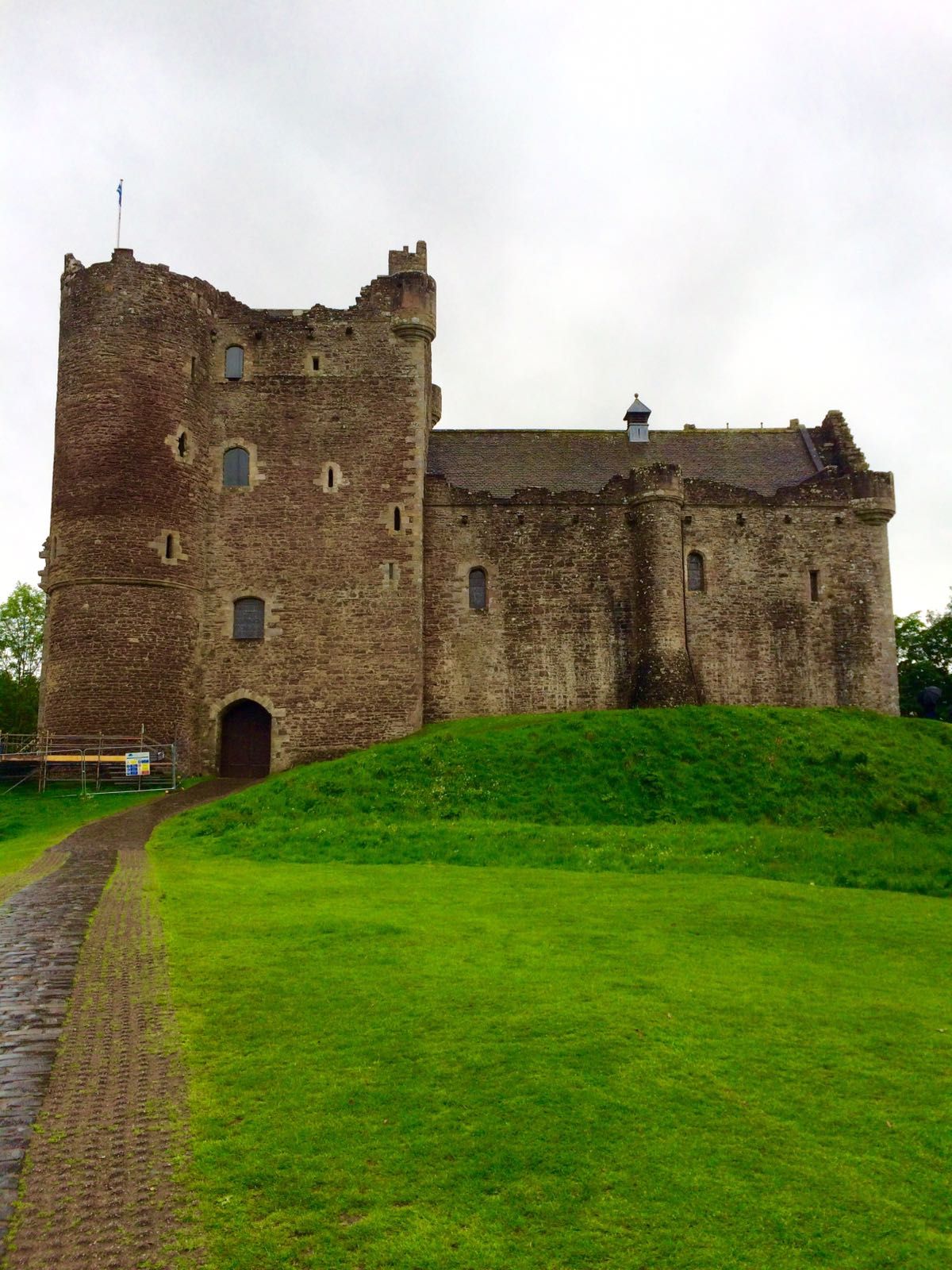 Doune Castle near Stirling plays a role in de series as the fictional Castle Leoch, which is home to Colomn MacKenzie and his clan in the 18th century. It also features in the 20th century episode when Claire and Frank visit the castle ruins on a day trip.
The movie Monty Python and the holy grail is also filmed here. The castle has a nice audio tour and explains which rooms and spaces where used for what purpose. In this audio tour there is also some extra behind the scenes information for both Outlander and Monty Python series. A great castle to visit! Midhope Castle house is Jamie Frasers family home called; Lallybroch. Too bad we couldn't go inside, because it is a ruin and it is not safe. In the series they filmed these scenes in the studio. 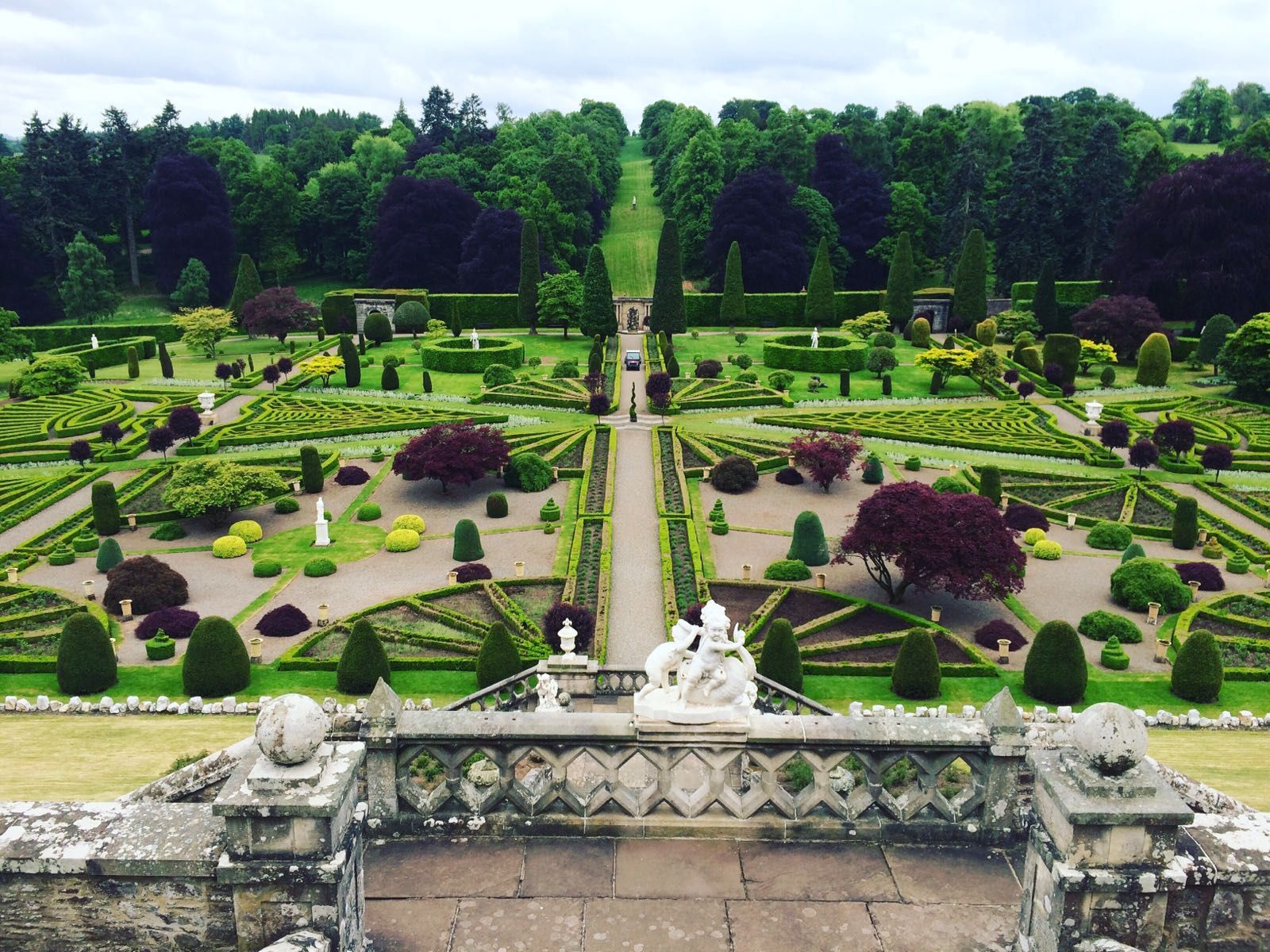 These gardens are so beautiful and well kept. I don't want to know how many hours the gardeners need to keep it like this! The castle is not open to public, but the gardens are. In the series they use these gardens as a stand in for the gardens of Palace of Versailles in France.

Next to these nice places to visit, Scotland is a country with gorgeous landscapes. We saw many wonderful mountains, rivers, lakes, green fields and forests. The nature is stunning! I never saw so many different shades of green.

Also important: the food is great! I had some great steak and Ale pies, Fish& chips and a lot of nice sweet stuff, like sticky toffee, pudding, scones and cakes. 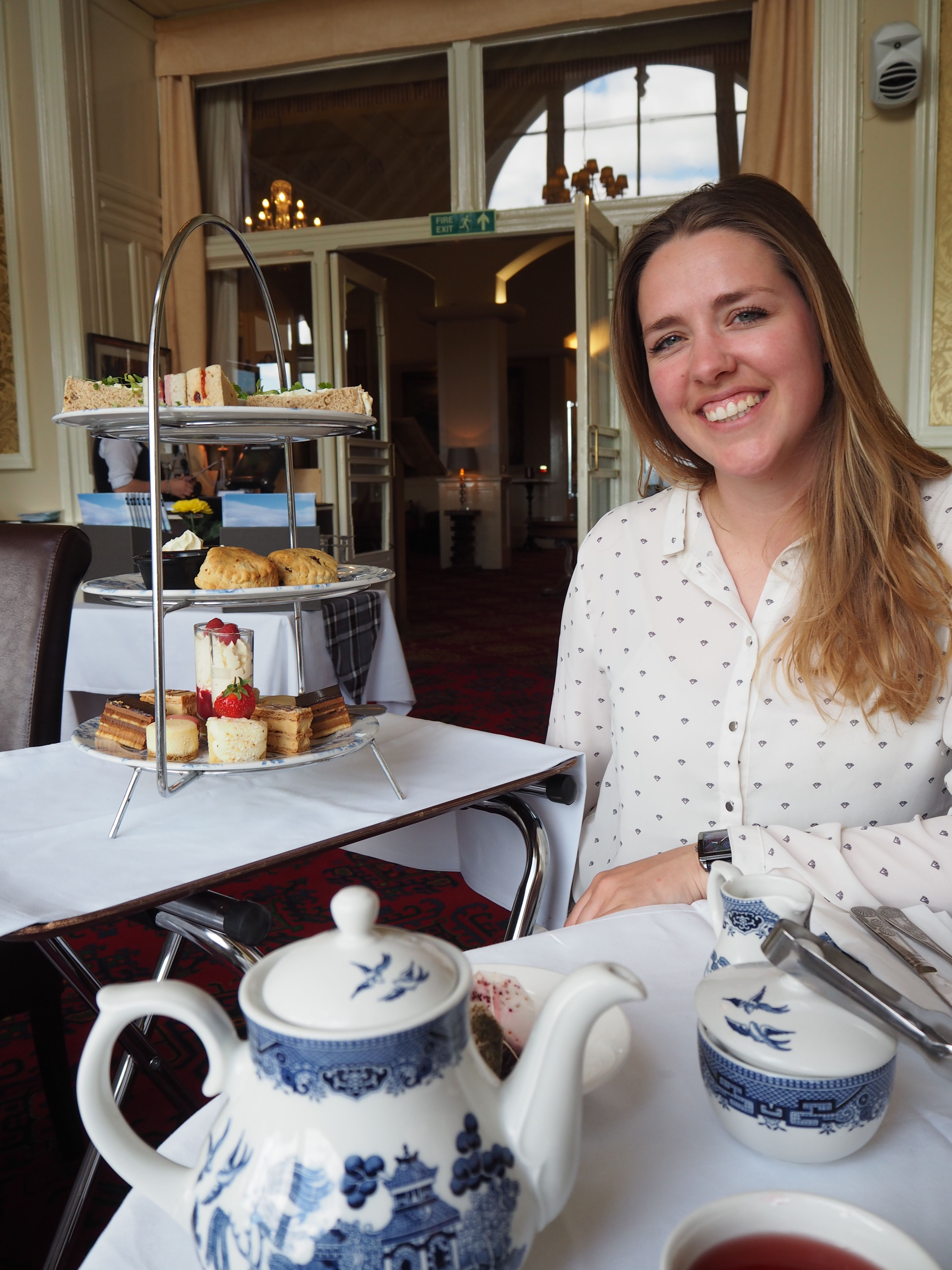 I hope I inspired you to put Scotland on your Bucketlist for your next holidays. It should be!

Have a nice day and remember... GoCoconuts ;)

Wish I was there!!!
Beautiful, beautiful photos, btw.

Thank you very much @realmeandi :)

These are great pictures. I've never visited Scotland before,

:) time to go then @rangertx

Wow man the scenery is truly beautiful, thank you for sharing!

I know, right?! It is gorgeous :) thanks @tre.youth

It really is. You should go for it if you have the chance :) @customnature

Thank you @redtravels Will check your profile out :)

Beautiful pictures. I look forward to more of your posts.

We will try to keep you entertained :) thank you @team101

I've been in Scotland some years ago. I have to say that is one of the most beautiful country I ever visited. Beautiful landscape, amazing nature, castles, and a magic atmosphere. I wish I could live there. Great post mate!

Excactly! That is the perfect way to describe it @thenightflier

Yes, they do. With amazing green holes :)

Great pictures! I agree, Scotland had probably the most beautiful scenery I've ever seen, as well as probably the best climate. When I was 16, my theatre group performed one of our plays in the Edinburgh Fringe Festival. It was one of the most amazing experiences of my life. There's a a hill near Edinburgh called Arthur's Peak, which at the top has an absolutely breath taking view of the city: That's great! Have you ever been back since? We saw Arthurs peak :)

Nice article. Scotland is still on my bucket list, especially Loch Ness. Still looking for a fancy hotel in Loch Ness with a fabulous view. Anyone any recommendations?

Gorgeous!!! I love the Outlander series! I was watching it on Netflix as well, but I got impatient waiting for new episodes so I started reading the books haha. These pictures are amazing! Like you said, I don't think I've ever seen so much green in my life. I'm going to have to move Scotland up on my list of places to visit!

Thank you @wlsghwjd Wise decision to move Scotland up your list :)
How are the books? Are they good?

At the risk of sounding like a cliche..... they are much better than the show. But everyone says that about every book adaptation. It just depends on whether you enjoy reading or not. Some stories are best enjoyed visually. The books do have more details...but in this case I think the series has stayed pretty true to the books.

OK, will check the books out then. Thanks

Ah, i´ve been ther some time ago, but very closer, thats why i did not emagine its such a big bridge