Let’s fly away to Bologna!

Happy day! I woke up missing Italy, so I thought my next posts should be about some of the wonderful cities I visited in Italy. Today I am writing about Bologna, a city in the Emilia Romagna region, totally undervalued one, it's in the shadow of Florence. I visited Bologna last summer, even if our goal destination was Florence, but we landed here because it was cheaper than flying directly to Florence, but little did we know we will fall in love with this place.

It's also a good choice if you are planning to visit Venice, there are cheap trains. We arrived around 21:00 and took a taxi to our accommodation. It was a perfect B&B, located in the city center. We were short on time so we decided also to discover Bologna by night because the next day on the evening we had our train to Florence. Even if we were pretty tired, after a working day, we did not regret our choice. We discovered a vibrant and young city.

After rumbling down unknown streets of Bologna for two hours we decided is the time to call the night off! We slept pretty well even if the temperature was hot, at night there were 30 Celsius degree…
Next morning, we woke up pretty early, but with a lot of energy, we took our Italian breakfast at a cafe near our place, we drank our latte macchiato and we were ready to go. 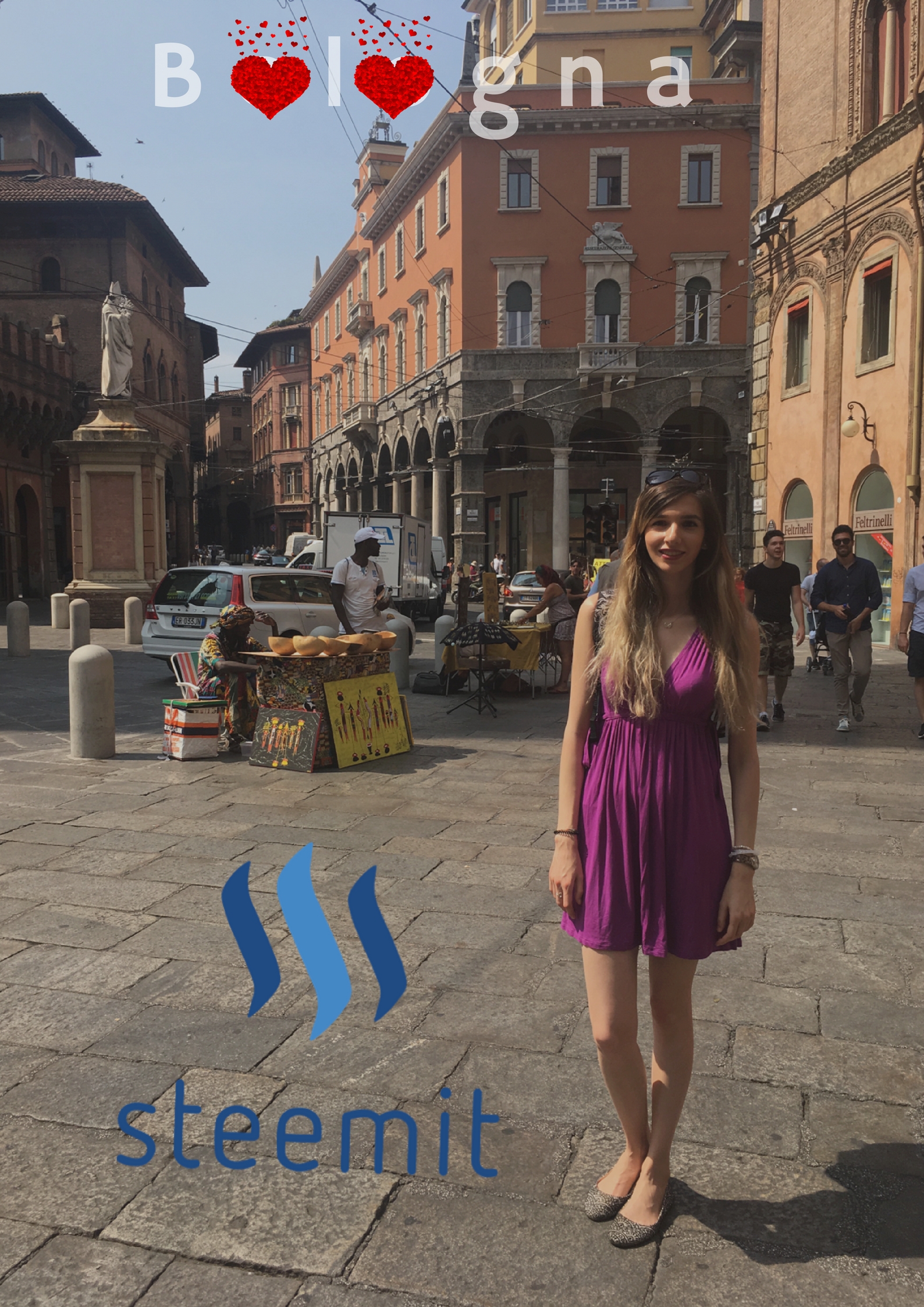 While in Bologna you can’t miss this square, Piazza Maggiore, where you have the possibility to visit a stunning and huge cathedral, The Basilica of San Petronio. Here are the relics of San Petronio. The construction of the basilica started in the 14th century but it was finalized in 1663. It so impressive both in exterior and interior, it’s a must see during your trip here. The cathedral still keeps organs from 15th century. Unfortunately, there was no musical show at that moment. 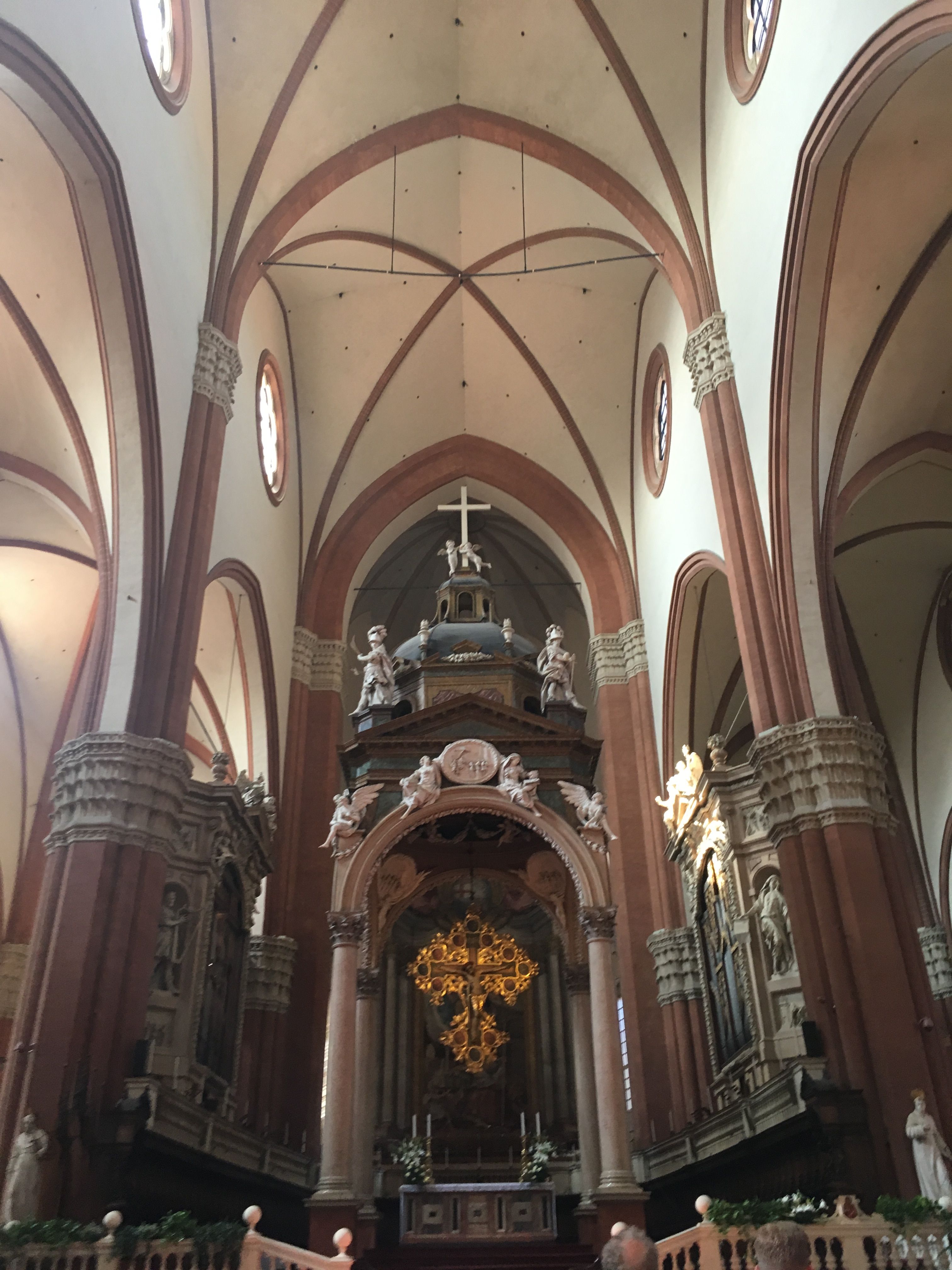 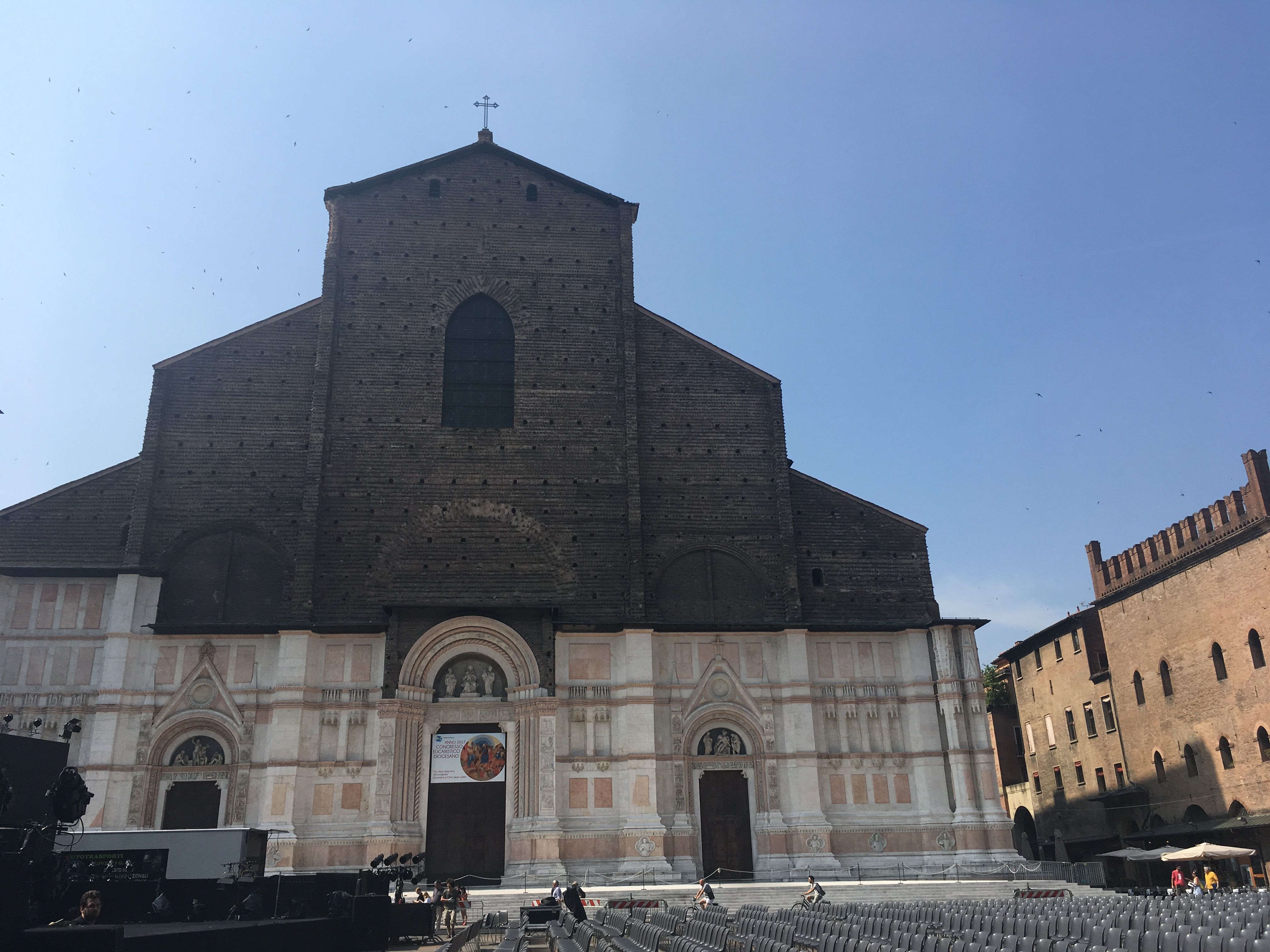 Statues in the city Piazza Maggiore was created more than 700 years ago and it’s still the core of the city, it’s not so changed from the original version. Unfortunately one of the main attraction located in this square, Neptune’s Fountain was under renovation, but now I think you are able to see it, so please share some pictures. It is created by one of the best sculptors, Giovanni da Bologna in the 16th century. Here is the Palazzo del Podesta it was designed in 1200 and it’s the oldest of the buildings in the square. 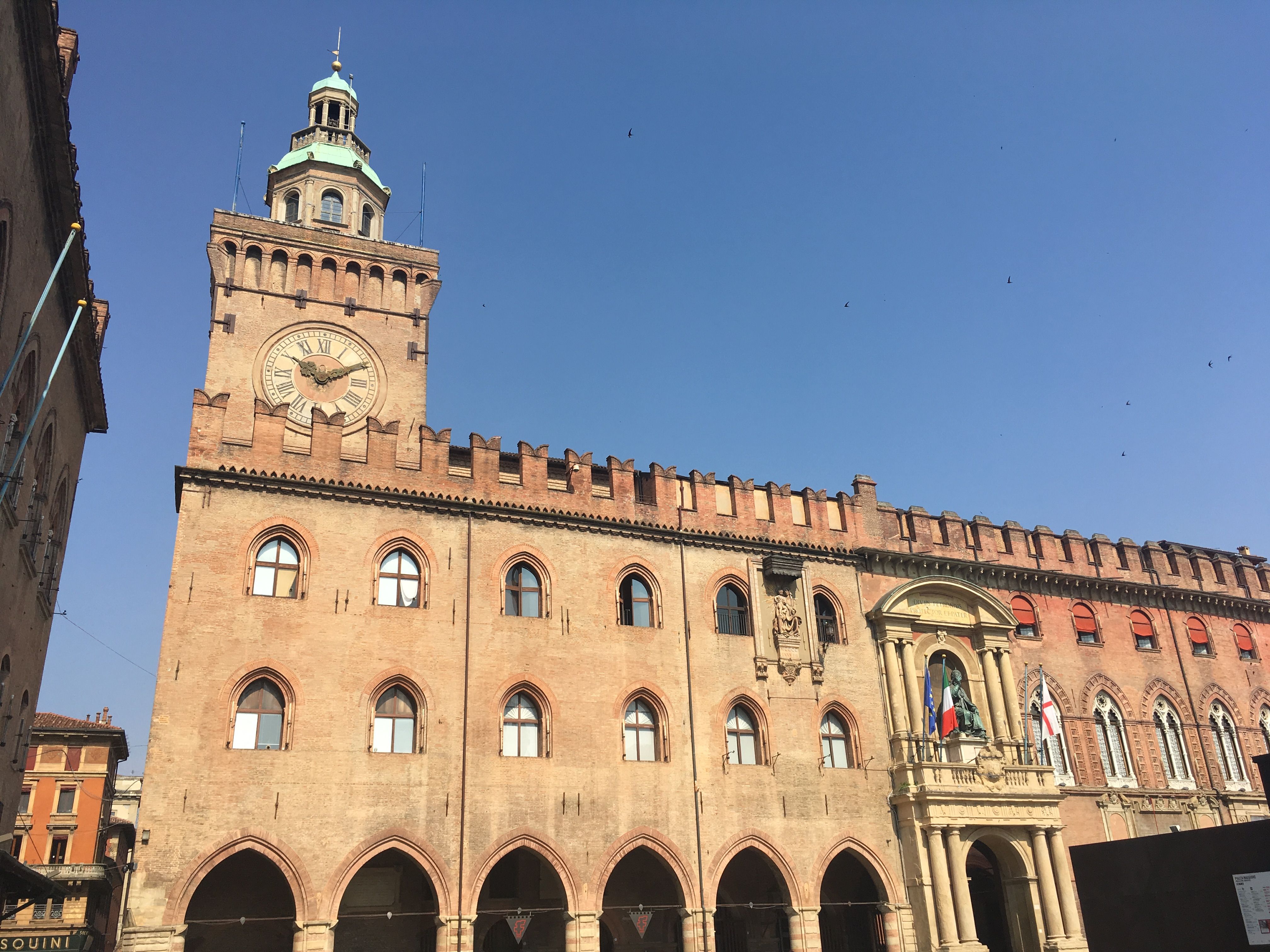 You can easily walk in Bologna old center or if you have time you can definitely rent a bike.
Italians have the most beautiful cathedrals I ever seen, the cathedral are like art museums. While visiting Bologna you should not miss Santa Maria della Vita, built in 12th century, unfortunately I didn't took a picture there.

If you thought only Pisa has its leaning tower, you were wrong. In Bologna you have the chance to visit Le due Torri, these two towers are located in the Porta Ravegnana Square. You can also visit it and see the city from the above, unfortunately we didn’t have time to visit it, but the views must be incredible. These towers are built in the 11th century by the Asinelli family.
The towers by night 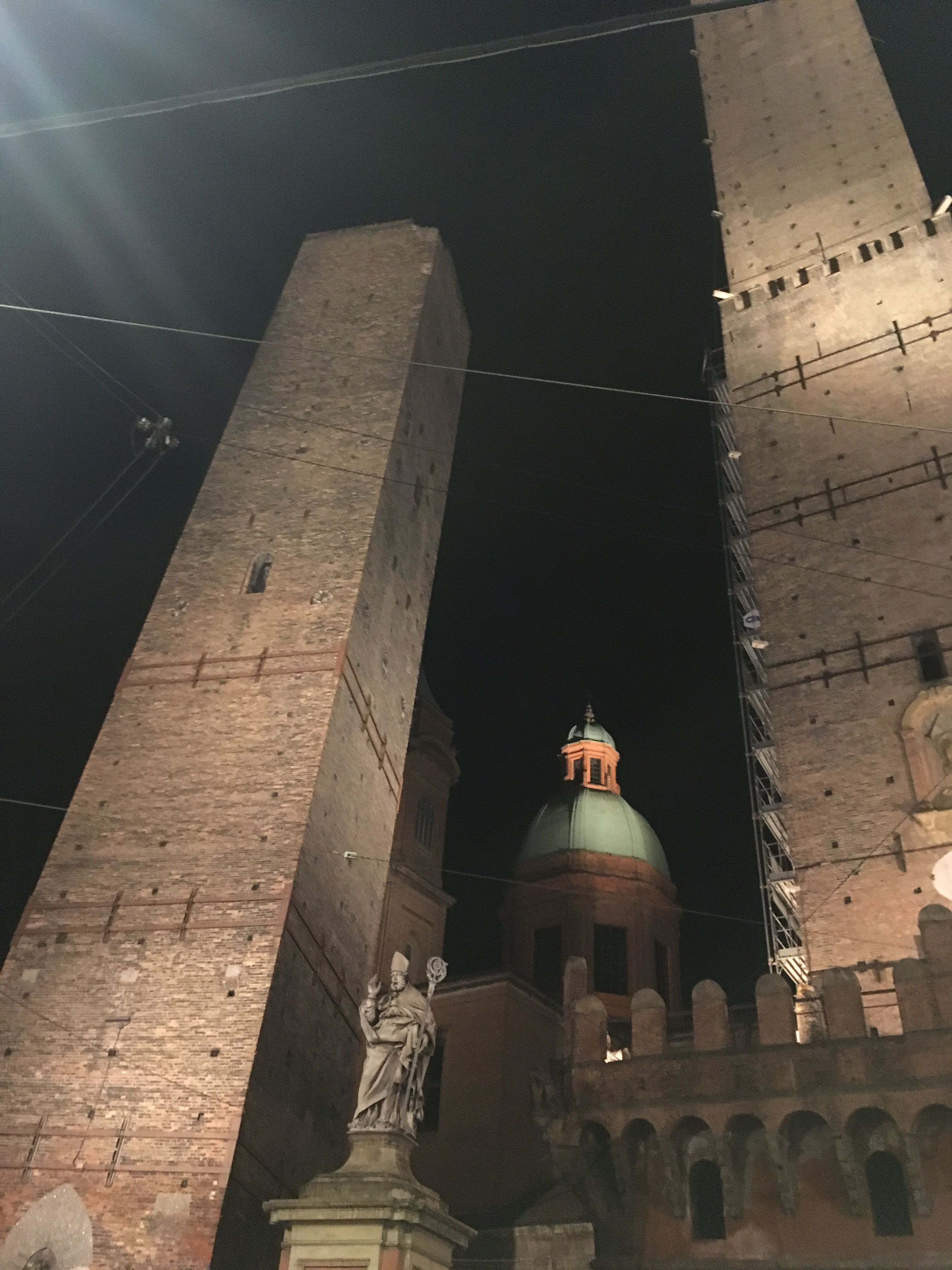 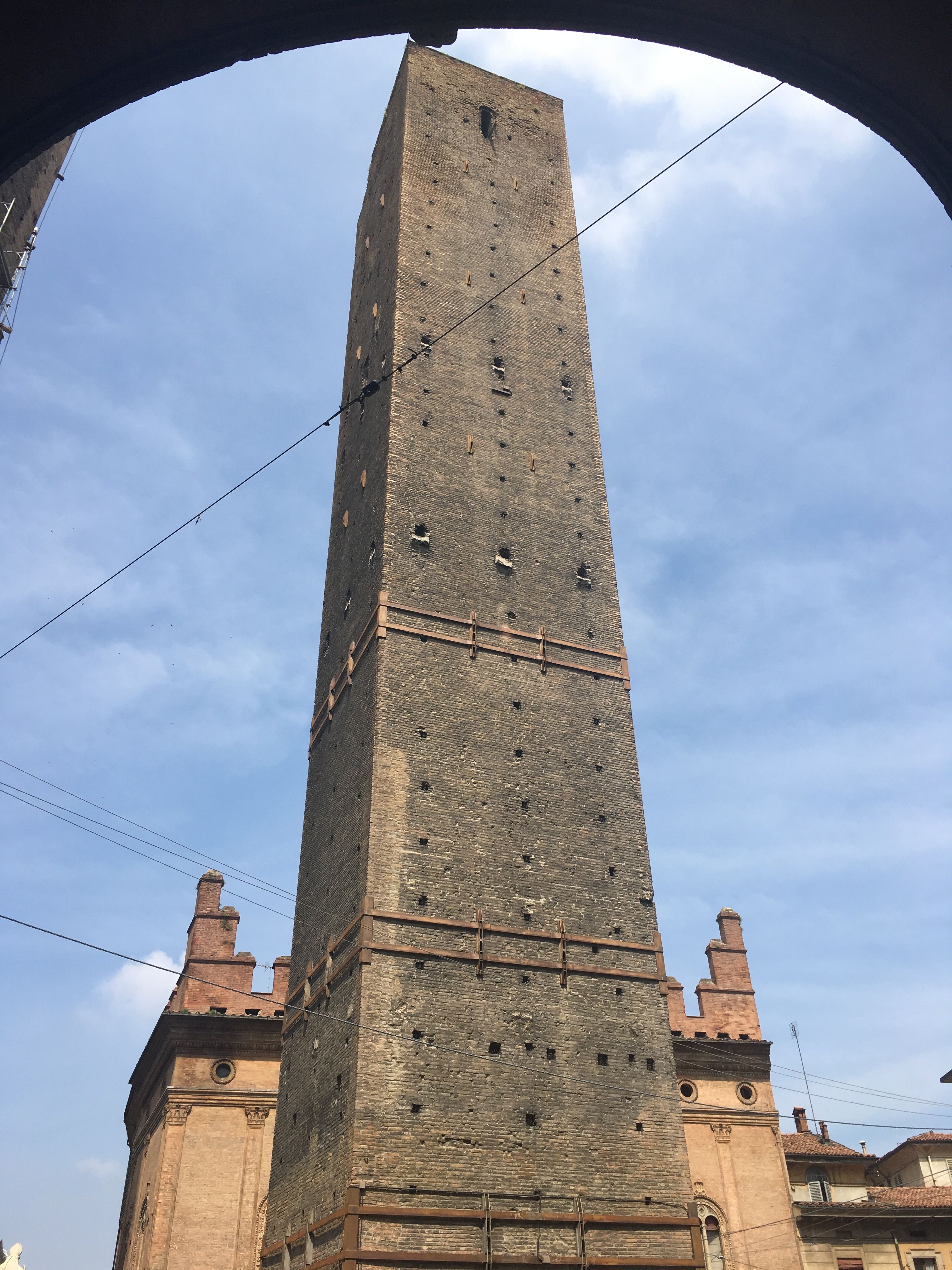 Because there was a strike on trains we spent a part of our time to Parco della Montagnola, the oldest park in the city. It’s a cute park, but it’s also full of refugees, who are begging for money, so if you are short on time you can miss it, you can spend more time and money doing some shopping.

Entry of the park of Montagnola The beautiful fountain of Pincio 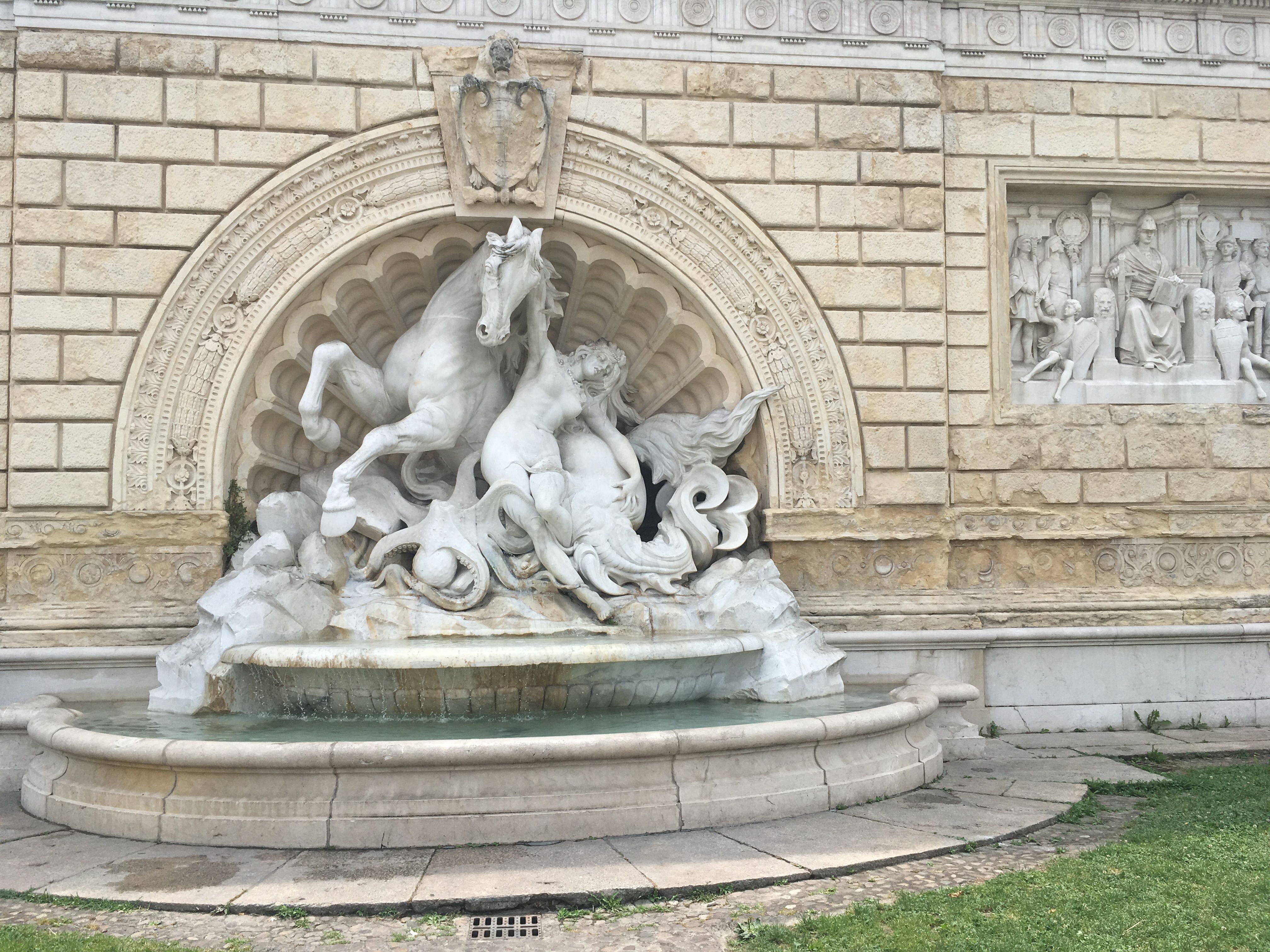 You should throw a penny if you want to return in this place. 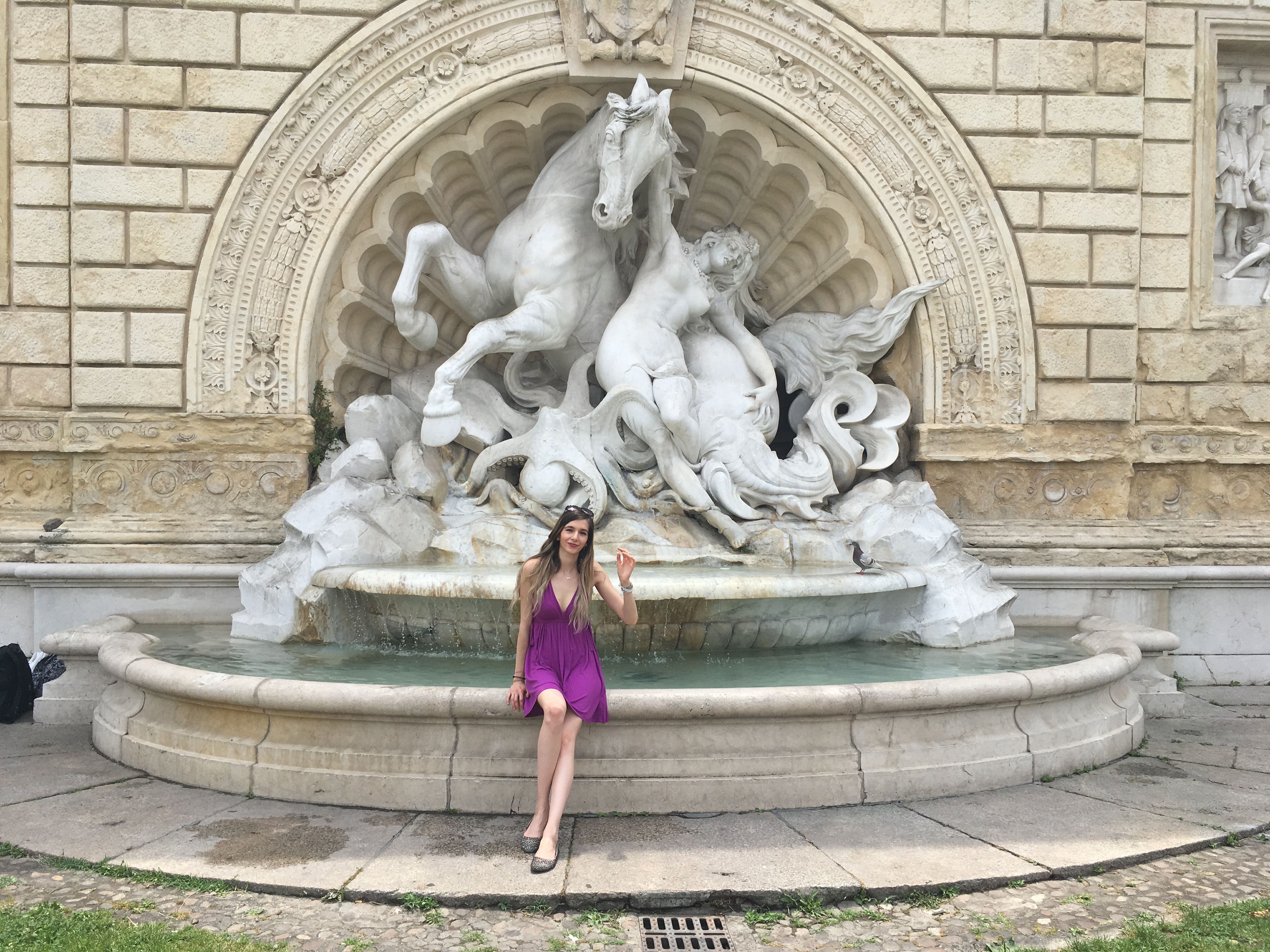 On weekends there is a market from where you can buy some cheap items, I bought a yellow dress with 5 euro. :D
It’s a student city, the University of Bologna which was established in 1088,it is one of the most prestigious and known in the whole Europe.

Beside the Bolognese pasta, the city its known for its porticoes, which makes Bologna a one of a kind city, also was nominated as a UNESCO World Heritage. I found this porticos super useful because you can avoid the rain or the sun without having an umbrella. 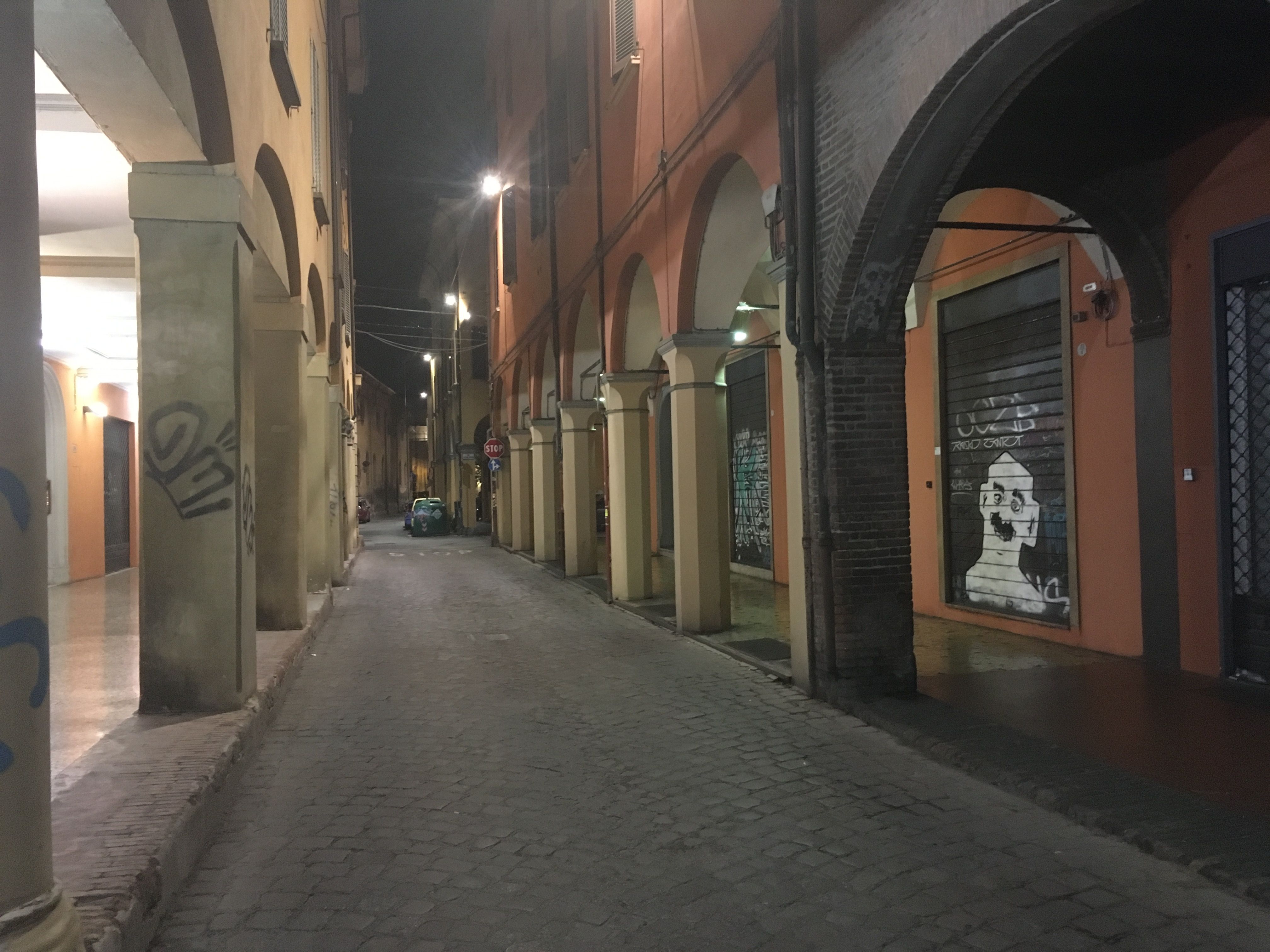 Italy it’s a safe place, there were 0 terrorist incidents until now and in Bologna were a lot of soldiers on the streets, so we felt safe.
We googled the train schedule, but unfortunately, we weren’t able to leave so I ate an excellent gelato at a Gelateria next to train station. Every time when I visit Italy I eat their tasty gelato even if outside it’s winter, it simply doesn’t matter. As I already mentioned there was 4 hoursg strike, so we walked a lot and after that, we rested a bit in the park, until the whole situation was back to normal.

There is a lot to see here and I look forward to my next visit, actually I have an opportunity to visit it again on April, but I have other trips in pending, so I will have to decide.

Why to visit this city:

How to get from the airport to the city:
Has only one airport, Bologna Guglielmo Marconi Airport, located super close to the city.
You can choose one of the options below:

Accommodation:
You can find a lot of B&B, hotels and the prices are really acceptable. 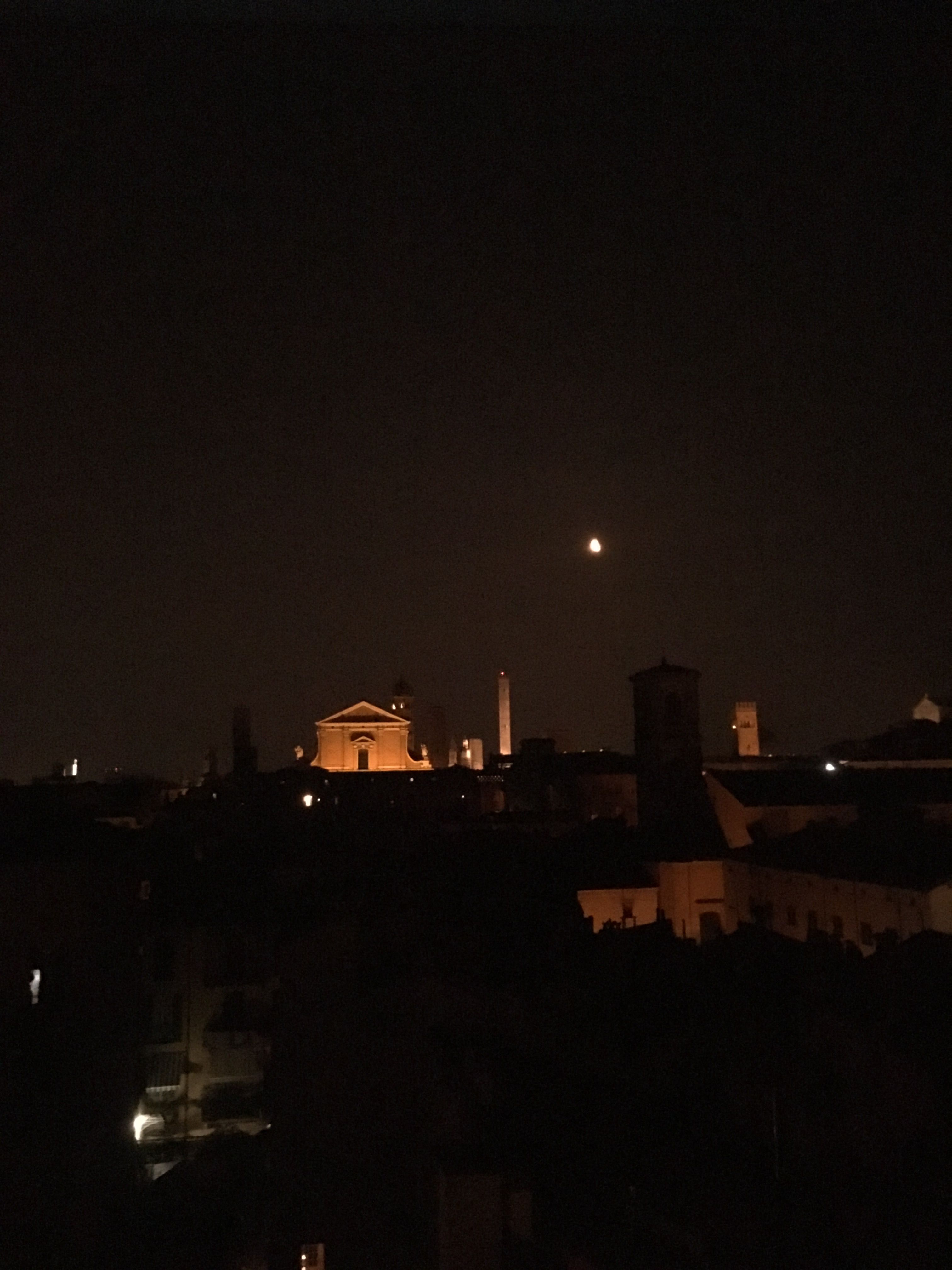 When it’s the best time to visit:

Did you know that?
Bologna was the first city in the entire world to proclaim the abolition of slavery.

Prices for the main attractions:

Bologna is the best city in Italy for food and has the least number of tourists. With its medieval beauty, it has it all…
Mario Batali

Can you buy a ticket that lasts a week? And do you purchase them on the buses?

Thanks for sharing nice travel post. It will be my guide!

Ciaoo from Milano! Che Bella, Buonasera! =)
I like ur post. But don't forgot even if you think here is safe you have to care your bag in Italy always (Attezzione)! Thanks for your good sharing! Come again <3

Just returned on Saturday from Bergamo! I Ciao! :*

No Bologna is not in Tuscany, it's in Emilia-Romagna just FYI :)

I know! someone already told me, I changed! thanks

Oo nice post and photos, really loving the authentic cathedrals and architectures in europe! wish I can travel there one day :)

I am sure you will!

WOW! I have to book a trip to Europe soon! I see posts like this and it makes me want to get on a plane right now and go experience beauty like this!

Thank you so much! I am waiting for you! I am sure you will love it!

I've been in Italy few years ago. Really nice and sunny country. Girls are very beautifull there. Greetings from Poland :)

Hello dear @alexandraioana26!
I'm from Italy and I really appreciate your post, I visited too Bologna a few times (i'm from Padova) and I like it!
I only want to say that Bologna is in Emilia Romagna region not Tuscany...(Florence is in Tuscany, that is a different region)
I hope you eated the famous piadina romagnola that is really good!
Keep up the good work I enjoyed reading your post!

Thank you for the useful info @steferretto! I will edit, unfortunately, I didn't eat any piadina, I need to visit it again! ciao! cheers

I'm based in another northern region :)

great post my friend :) beautiful pictures! It sounds like a great trip. Hopefully you get there again in April :)

what an amazing photography dear alexandria, really wonderful places. hope you have a great time.

When I visted Bologna it was raining and porticos saved us! Bologna is beautiful and with almost 40 km of porticos it is really unique. Love it!

These are incredible! Amazing view, really beautiful, just like you. You are a charmer! My first time on your post, i guess i would love to always see more. You just earned another follower. Well done. I guess i would now love to visit Bologna. Amazing views.

Fuarte frumos loc! You travel quite a bit, do you live in Romania?

Yes, I live in Bucharest! I try my best, but I want mooooree!!! When was the last time when you visited Romania?

Never... unfortunately... Was born in America and never went back to Romania...hopefully one day!

Both the city and you look gorgeous !

Great to see you again @alexandraioana26.
I love the beautiful cathedrals. I would love to visit Italy. It is absolutely beautiful, so thanks for sharing it.

Great to see you again too! I hope you will have the chance to visit Italy with your boys! :D

Nice post.
I look forward to visiting Italy in the nearest future.

Bologna looks so pretty with so much history steeped into it with traditions.
This has to go on the bucket list of places to go to now :D

Thanks a lot! You should definitely go! Have you visited Italy @biglipsmama?

No not yet been on the bucket list since a child so hopefully one day :D

One of my favorite Italian cities :)

Beautiful, @alexandraioana26 :) What a great post. I love the amazing pics. I live not too far from there, about an hour northeast of Venice, another awesome city to visit. Have an awesome day Thanks! Where do you live? Venice is one of my favorite places, been there twice!

Me too... probably even my favorite, although it is far more expensive now-a-days than most everywhere else in Europe... I'm not too far from Maniago, which was the main weapons maker/suppliers (swords/knives etc) the Templer Knights setup when they built up this region under the Holy Roman Empire, during/after the Crusades, as it emerged from the (so-called) fall of the Roman Empire.

these are so beautiful, I wish I was there, Thumbs up