Keep calm & travel ON - When in Bergamo, Italy

I hope you had a great day. One week or so I returned back from an awesome holiday. I knew about how beautiful is this city from my best friend who visited several years ago when she got her flight cancelled and had to spent 2 days here so I was lucky to have her now with me. So it’s a must to visit it, it is so accessible because Orio Airport is a very well connected airport. For example, we chose this airport because from here the flight for Fes, Morocco was super affordable.
The city of Bergamo is divided into Upper city (Citta Alta) and lower city. I liked both parts, but I fell in love with the upper city. 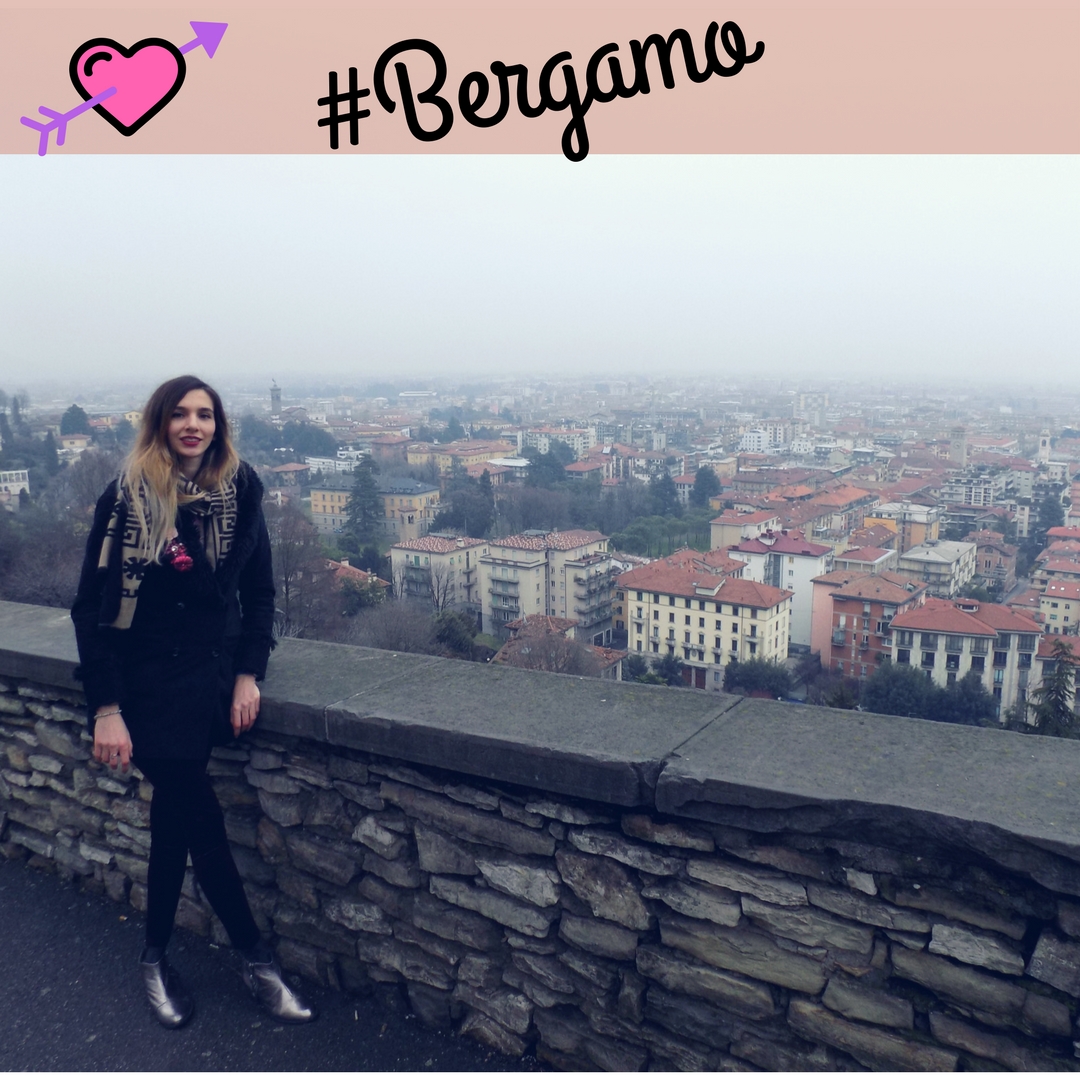 Here is a map of the Upper city Accommodation
You can find plenty of B&B and hotels in this city.
We were a group of ten people and we chose Bella Italia accommodation, perfect for a group, located near the train station and city centre too. I will be visiting more of this city because the tickets are so cheap.

How to get to the city from the airport
Orio Airport is located only a few km from the centre, so the cheapest and easy way is to take their bus, no. 1 for Airport, it costs 2.3 euro/way. You can also buy it directly from the bus, but it’s more expensive 3 euro.
The ride takes 10-15 minutes and there are three buses per hour.

Unfortunately, I had to pause my sugar-free diet, because I can’t resist gelato… but probably in the near future, I will start again this challenge!

What to eat while you are here: Bergamo Citta Alta it’s such a beautiful place, it’s a medieval city and looks a bit like Sighișoara, a Romanian medieval city in Transylvania, one of my favourite cities in Romania.

Because in Bergamo we had our layover, we were short on time. That’s why we chose the easy way to get on top, with the funicular. If you prefer to travel slow and have time, you should walk, it takes only 30 minutes, one of our group walked and this is why I know the time. There are two funiculars. We chose the one from Bergamo Lower town to Bergamo Upper town. This one was built more than 100 years ago and a ticket costs 1.3 EUR /way. I filmed the ride, so probably in the near future, I will upload it. 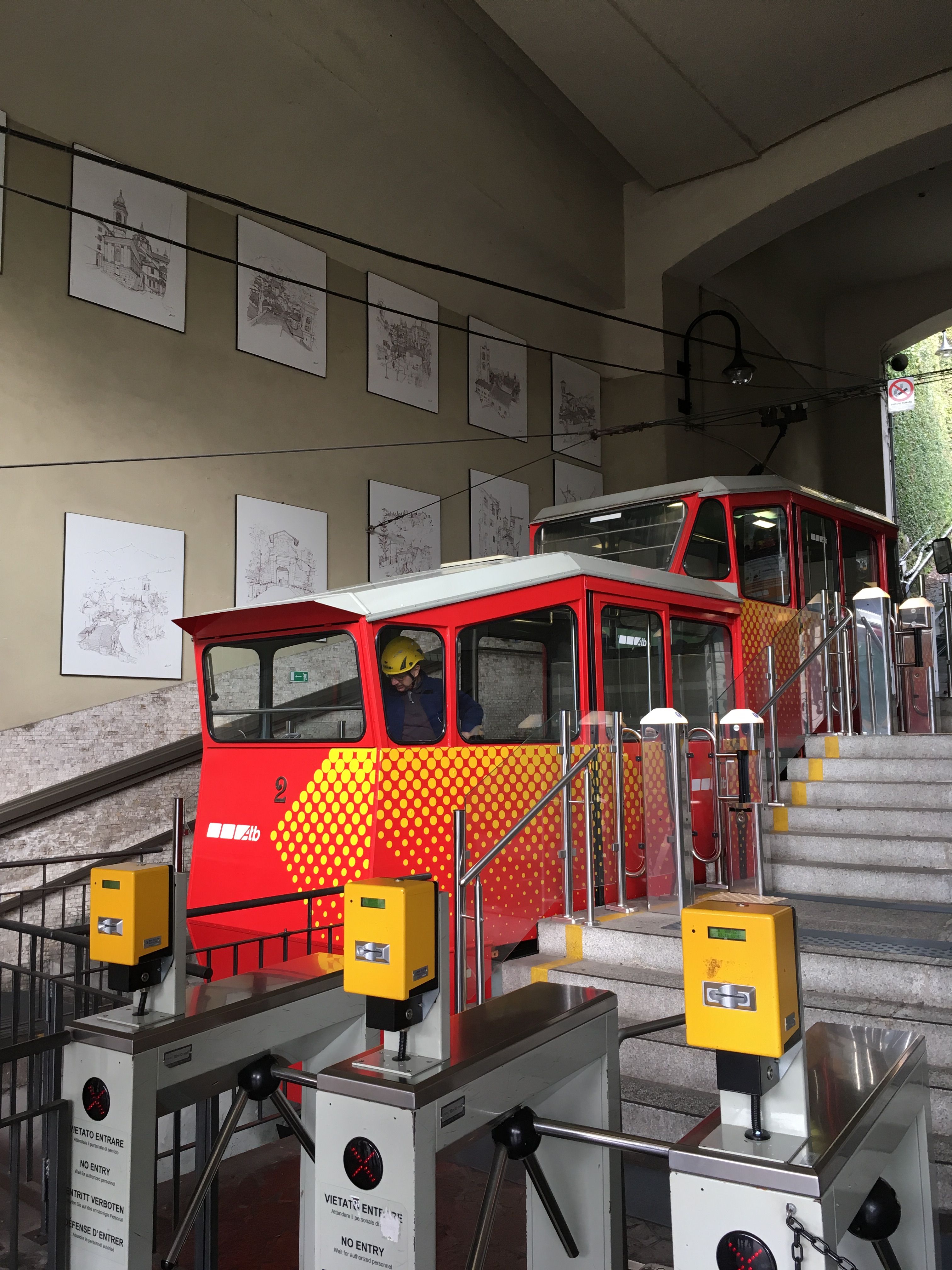 The other funicular (St Vigilio) connects the Bergamo Upper town with the hill of St Vigilio, the costs of the ticket is the same. Probably there are killer views too, so next time for sure I will go with this one. 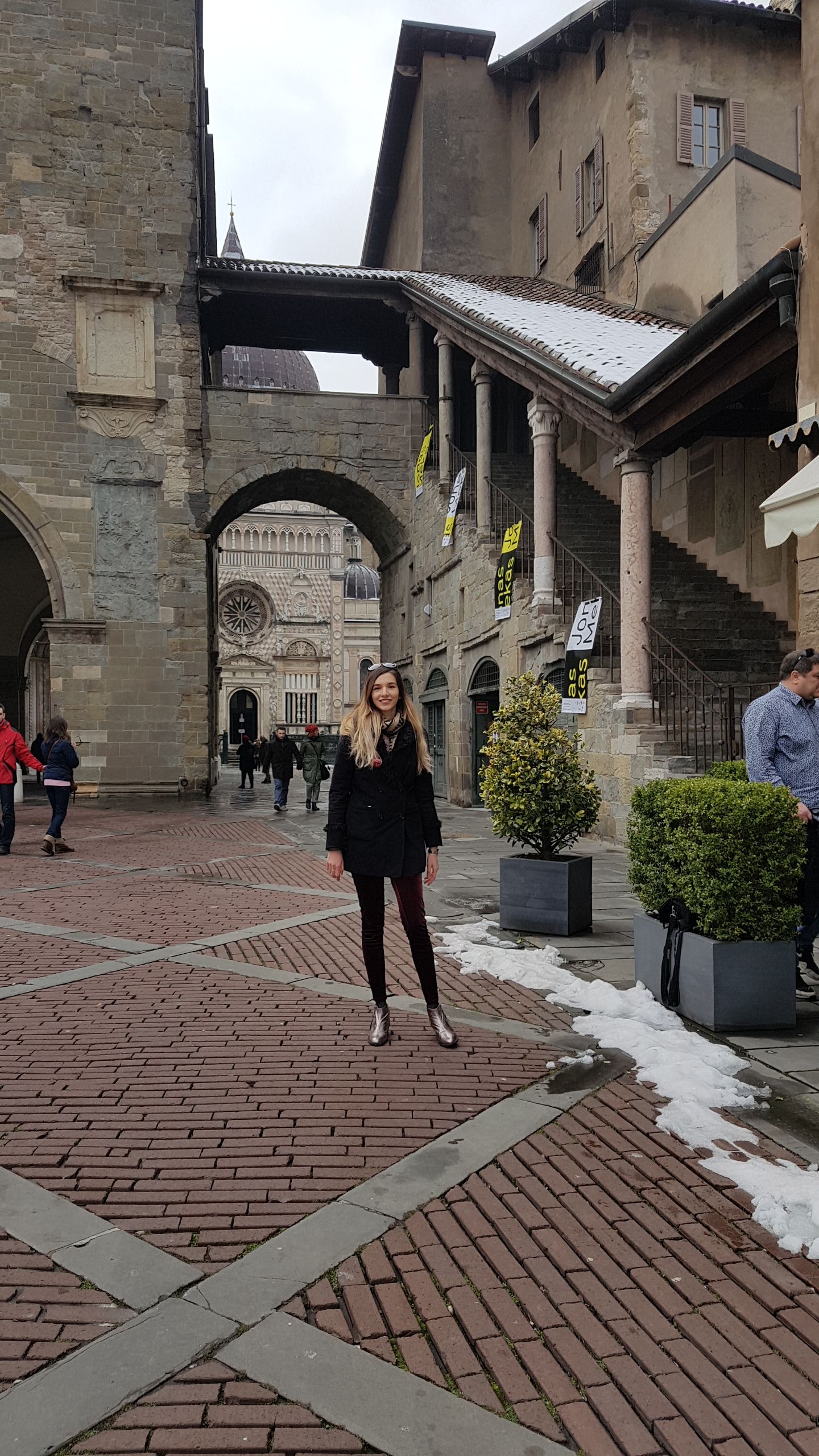 Even if we had only several hours, we checked/visited most of the attractions.

One of the most beautiful churches I have ever seen was here in Bergamo, Santa Maria Maggiore Church was built in 1137 and it was used for eight centuries as a place of music. I filmed the magnificent ceiling and the interior, maybe sometime I will upload it here. I found interesting that inside was colder than outside, probably to conserve this beauty. It’s located near Piazza Vecchia next to the Bergamo Cathedral and Cappella Colleoni. 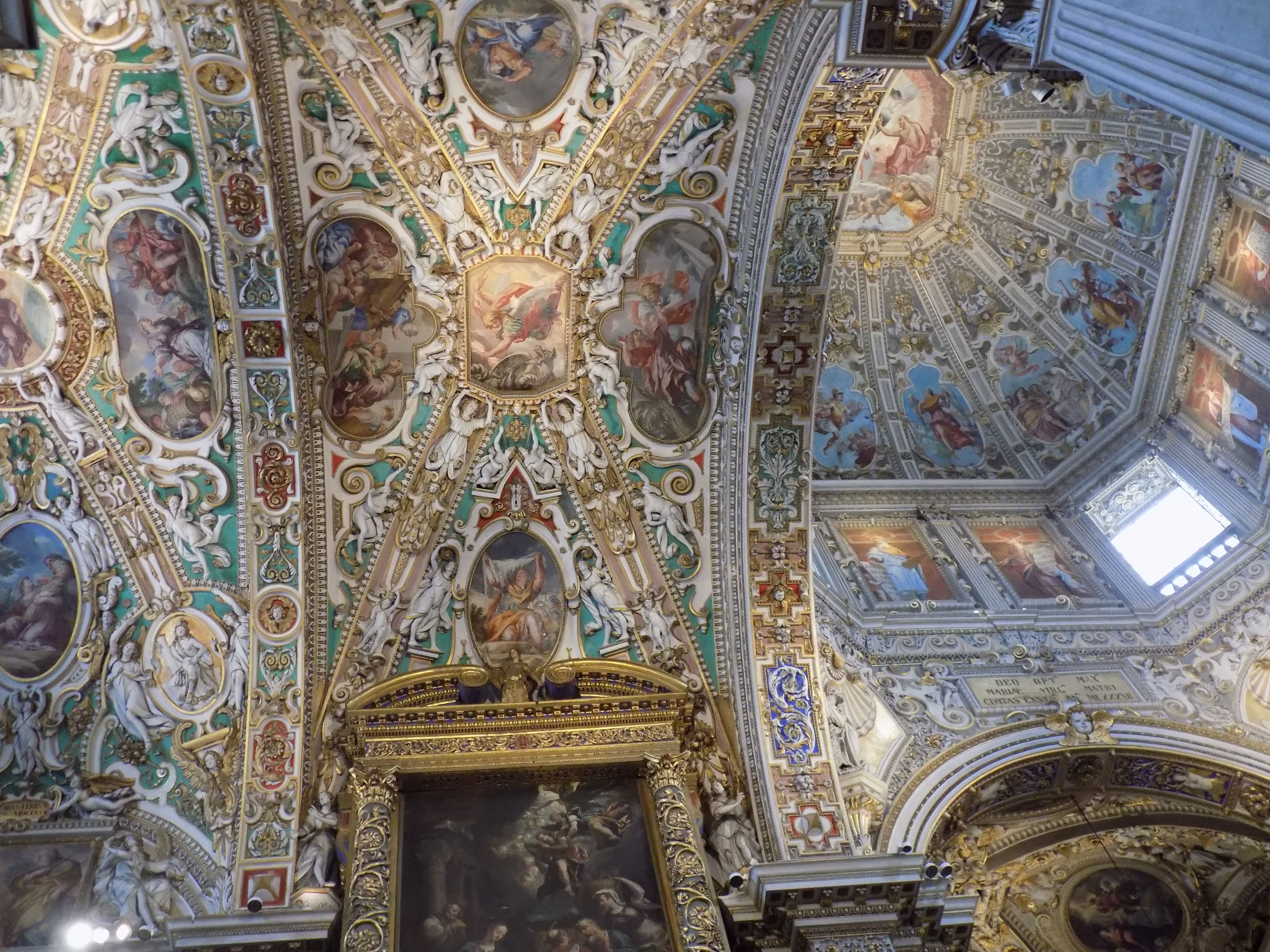 The patron saint of the city is saint Alexander of Bergamo, hihi what a sweet coincidence.
Bergamo Cathedral aka Duomo di Bergamo is a Roman Catholic cathedral. It was constructed centuries ago, it has its own museum and treasure if you are interested to find more. It costs 5 euro to visit it, but be aware of the schedule 13:00-14:00 it’s closed. 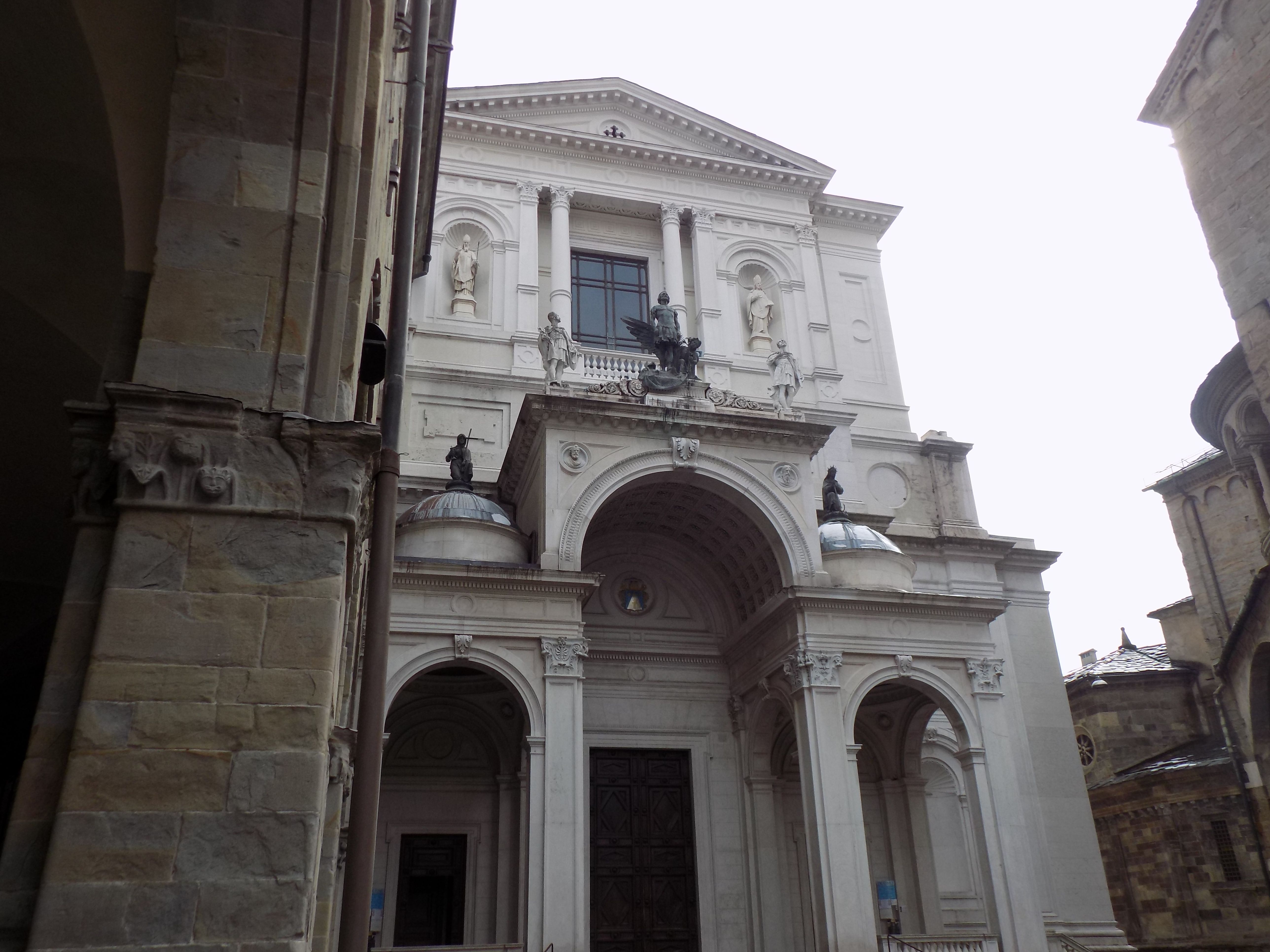 Cappella Colleoni is a church and mausoleum, a small one, but so charming, it’s worth it, I liked more the exterior, beautiful indeed. Unfortunately, I could not take pictures of the chapel. 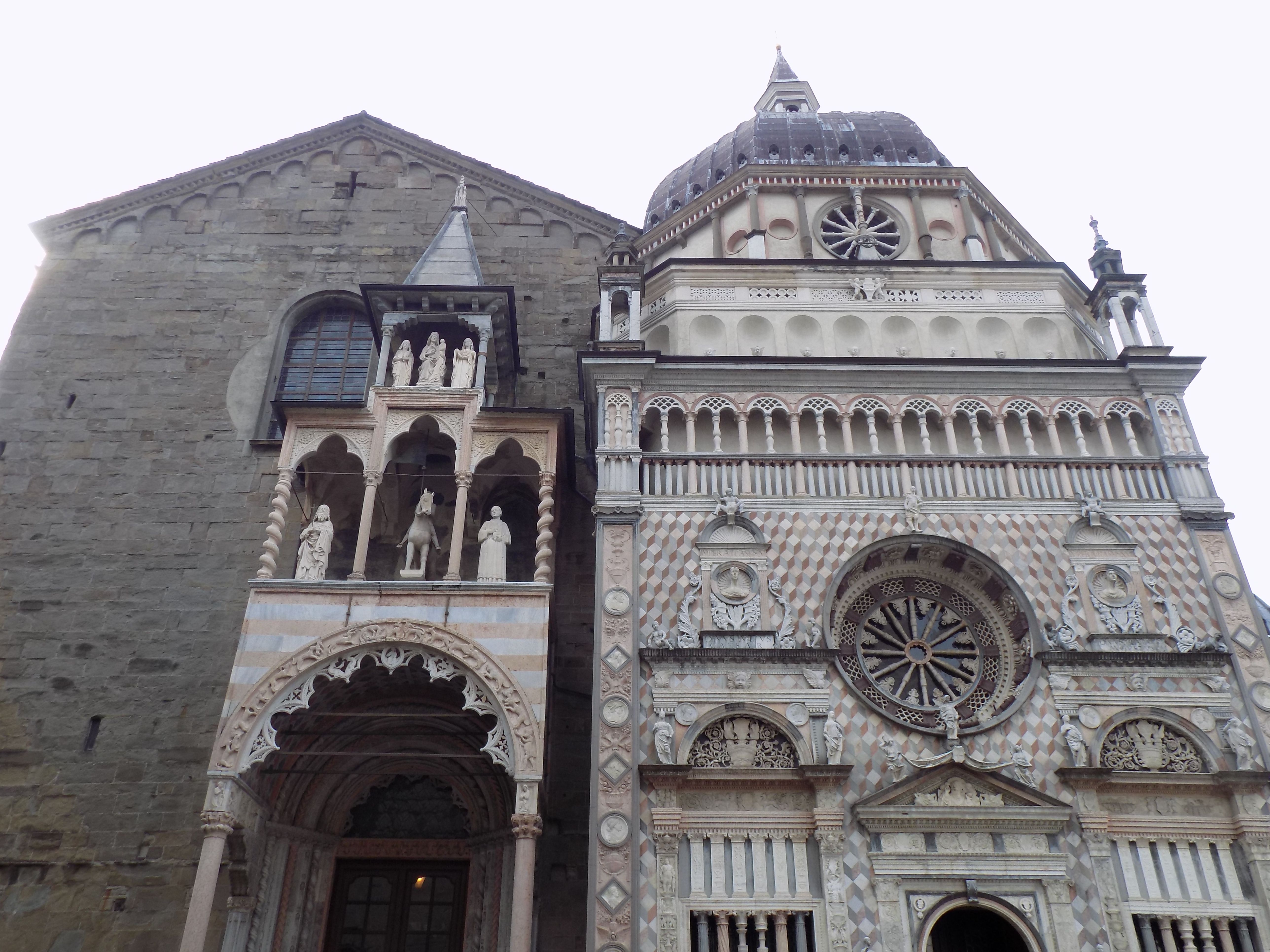 Piazza Vecchia is the core of the old centre, where we enjoyed a strong espresso, it was not too crowded, probably because the weather wasn’t that friendly. The Museum of Natural Sciences Enrico Caffi Bergamo is located in the Citta Alta, but in the city, you can see some big dinosaurs. It was inaugurated 100 years ago. 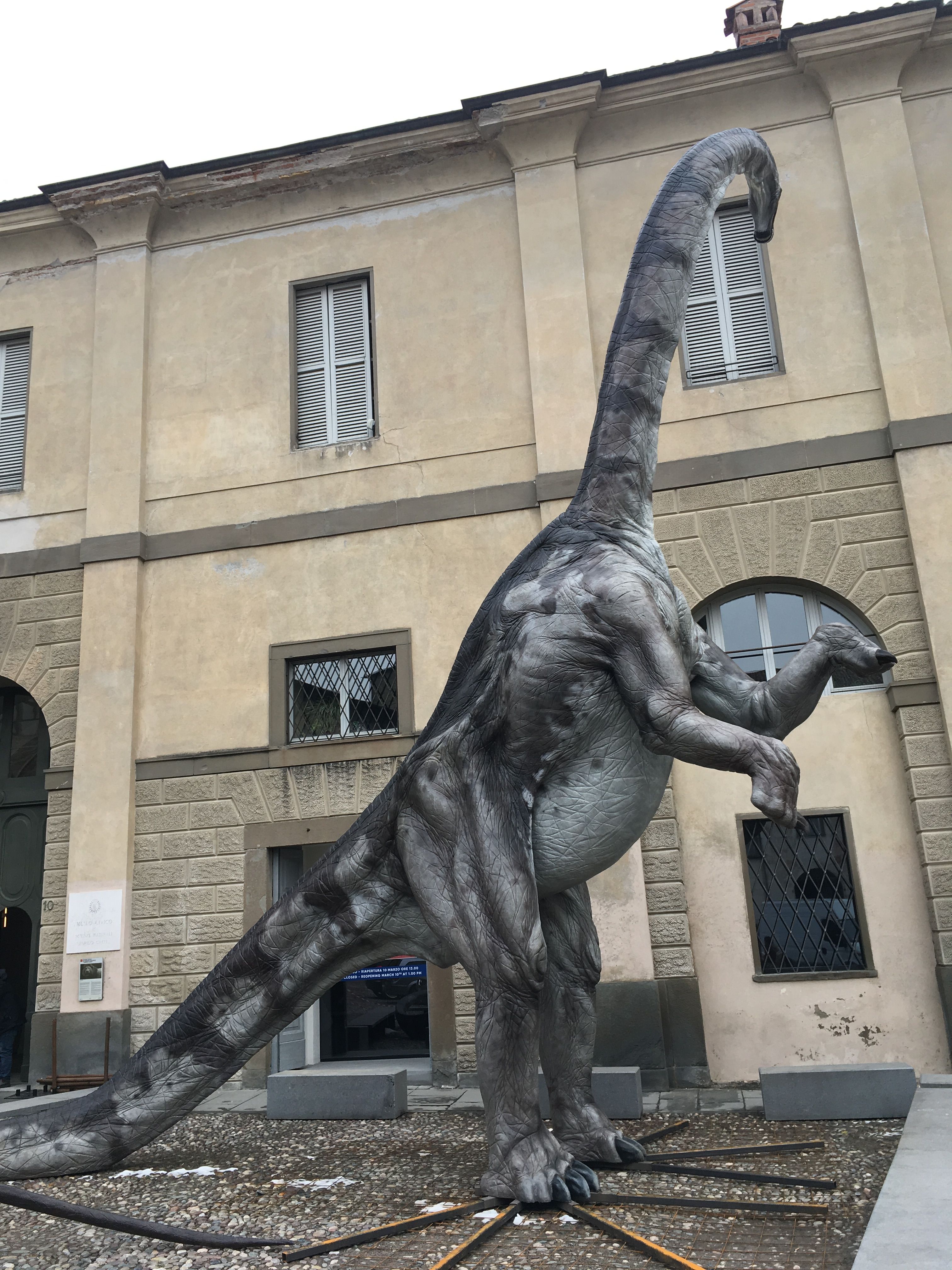 Città Alta has four gates, but unfortunately, we managed to see only one, Porta San Giacomo made from marble, was created in the 16th century. Here the views above of the city are amazing! 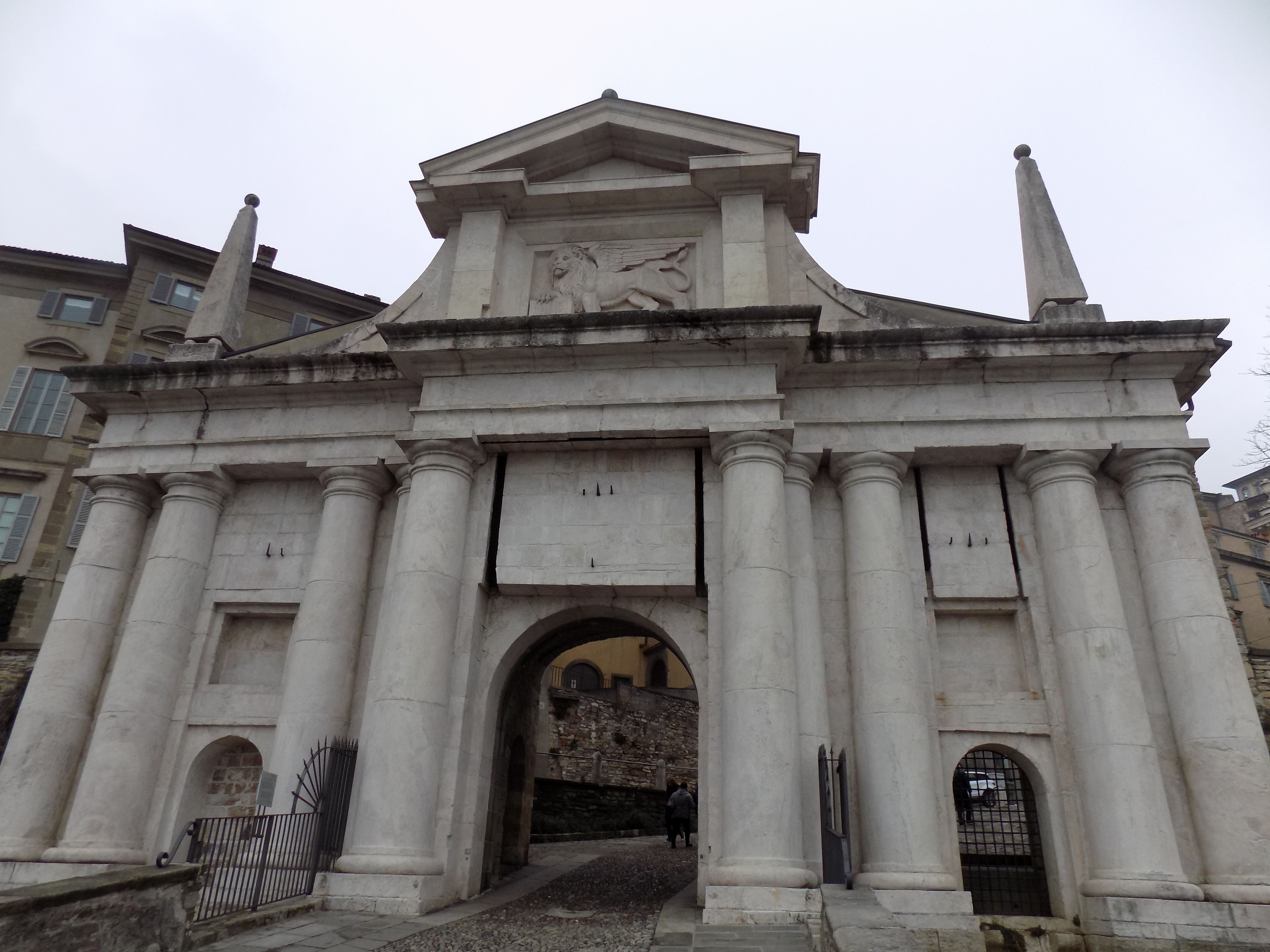 The lower city seen from above 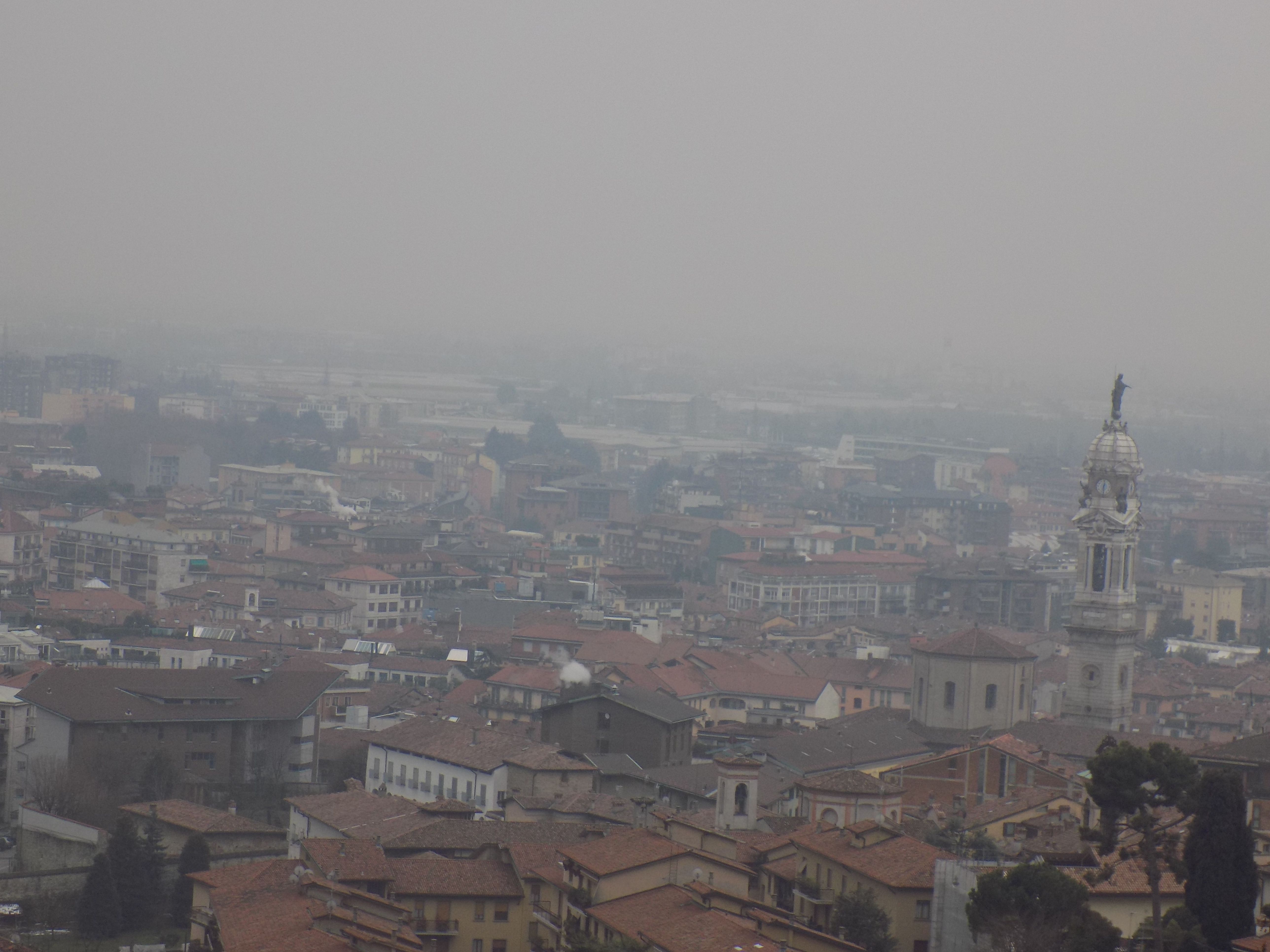 The Venetian Walls of the upper city 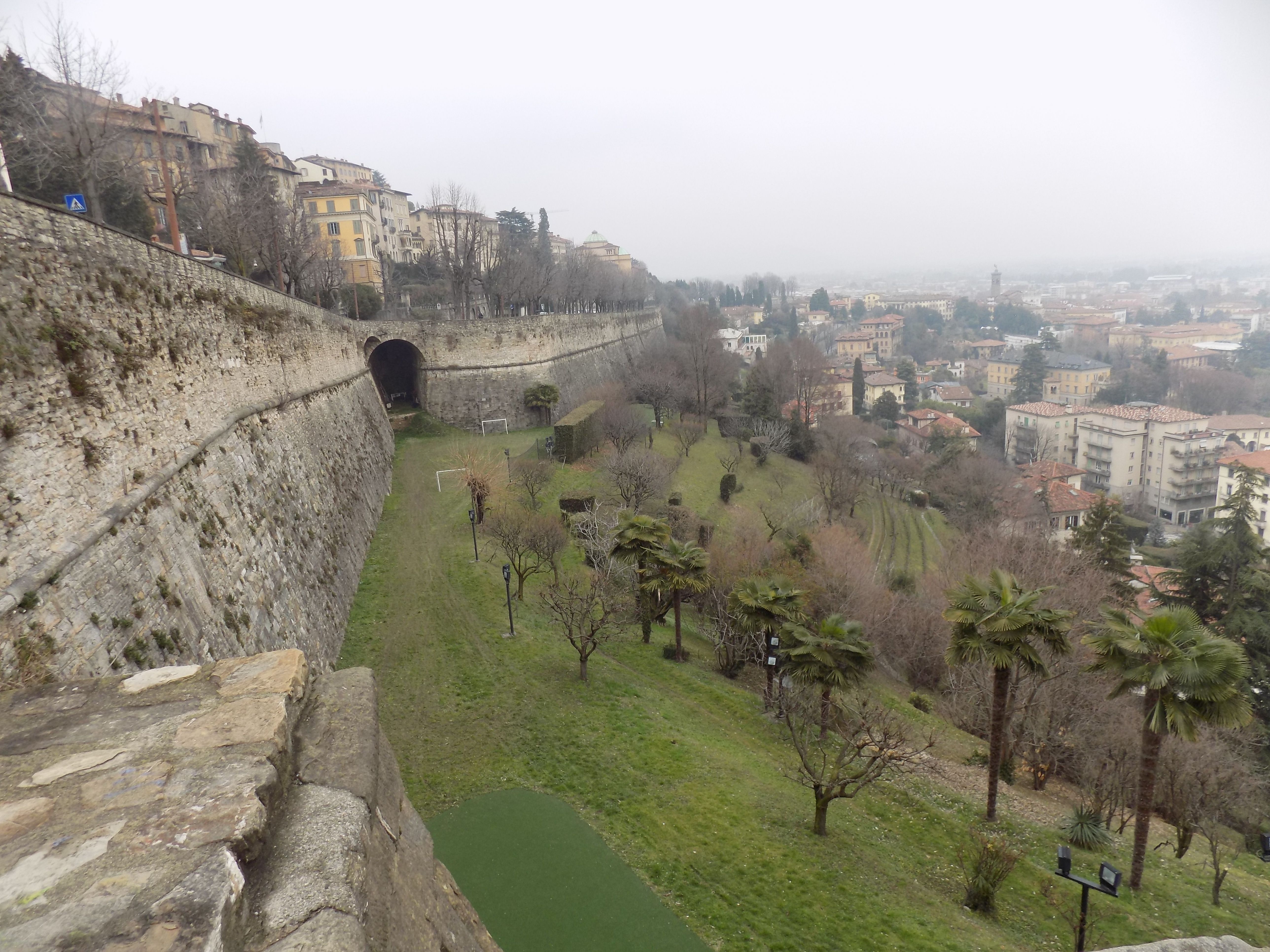 At lunch we ate some tasty pizza, of course, the best it’s here in Italy and it was delicious. After that, we walked on the narrow streets. I saw and entered lots of hand-made shops. I visited some headbands shops too, it was a lovely experience because I am a collector, I have more than 20 pieces, here is a picture made in this amazing shop,
but I will keep more about my experience in this cute boutique for Market Friday post. Of course, we had to try some taste delicious jellybeans, recommend by my friend who visited before! So the time flew away so fast, we had to say goodbye to this wonderful medieval city, but I am sure I will visit it again in the near future.

The beautiful Villa Finazzi located in the lower city 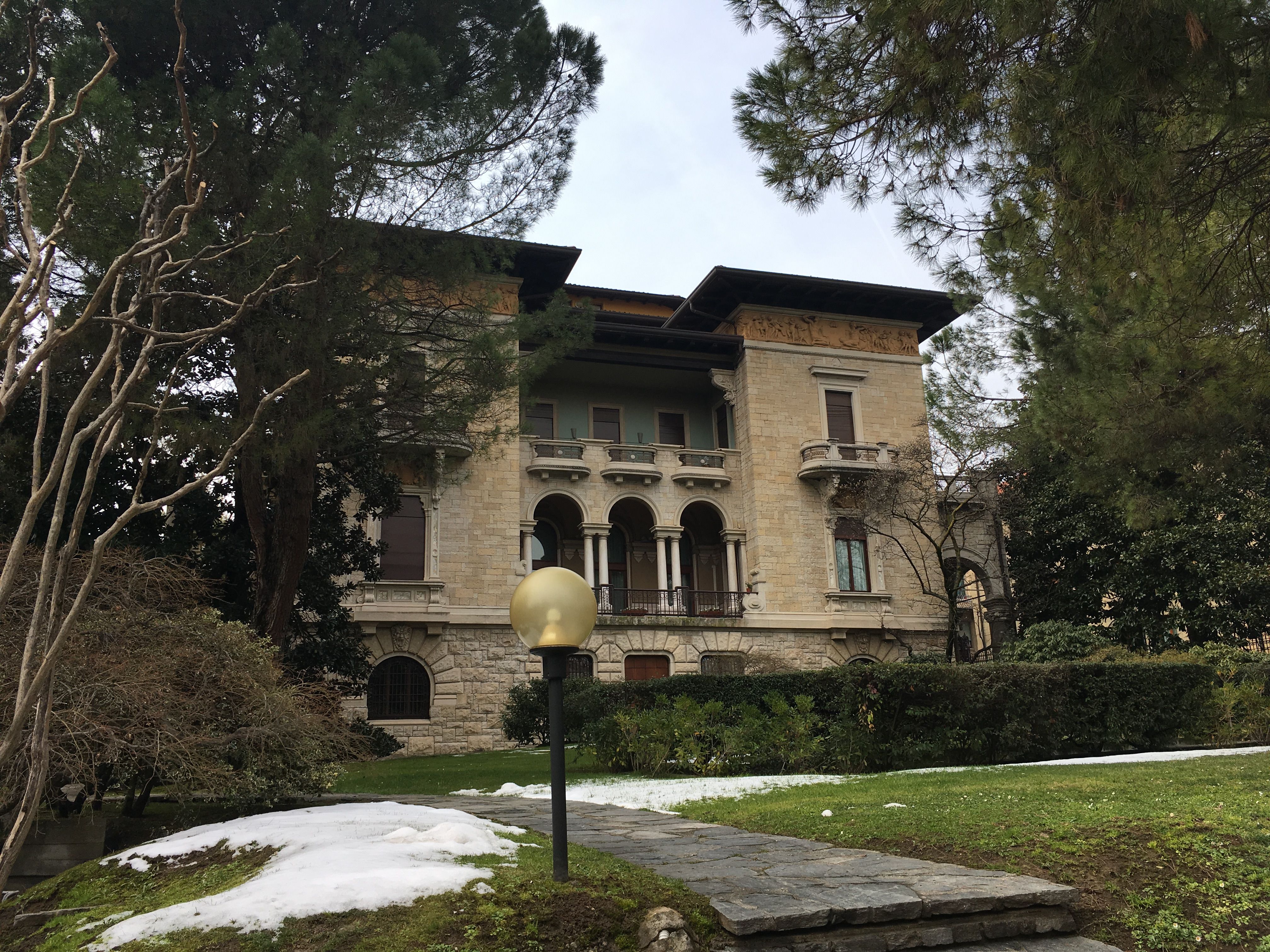 Porticoes, in this picture, looks a bit like Bologna 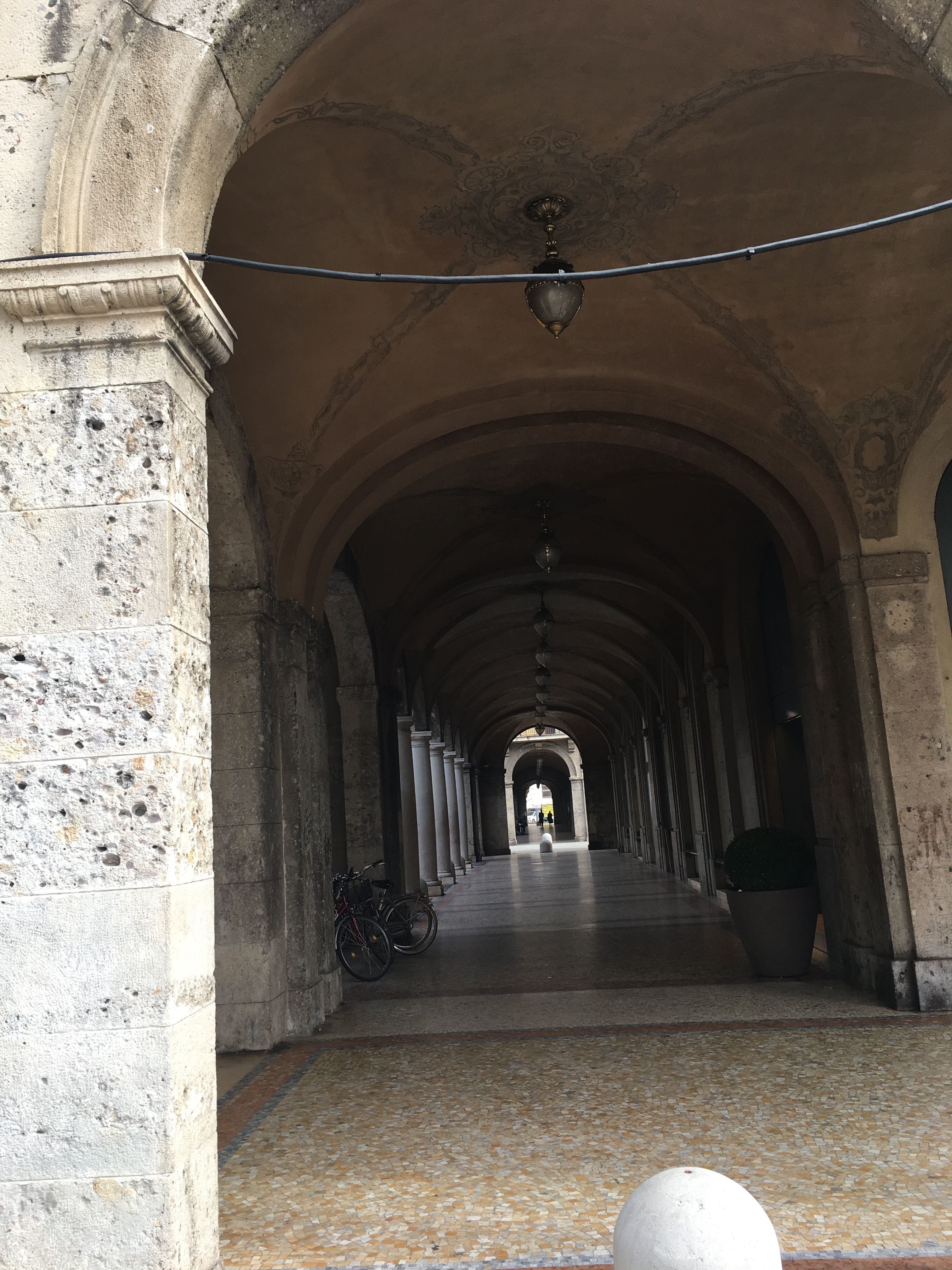 Have you visited Bergamo? If not, I strongly recommend it, it has its own charm, I am sure you will enjoy it! Italy, and the spring and first love all together should suffice to make the gloomiest person happy.
– Bertrand Russell

Have you considered doing DTube videos? Since you travel quite a bit and travel videos are popular, it might be worthwhile.

Thank you so much for your advice. I will try to post some videos on Dtube/Dlive.
Have a wonderful day!!!

Go with DLive over DTube. Dlive is free whereas DTube takes a 25% cut of your post earnings.

You have done great again, sweetheart 😍 you are very hardworking, congratulate you!
Reesteemed & Upvoted

Thank you so much! besitos 😍

Wonderful post @alexandraioana26! Thanks you for the little tour. Well written and I enjoyed the photos very much. One day I hope to visit Europe.

😍😍 Fingers crossed! Thank you so much for reading my post @kingoftime!

Good documentation, thanks for sharing!

Thanks for reading it @somalcescu!

what a wonderful trip and your photos make me miss Italy.. the food , the archtecutre, the vibe and everything. yes I know it make me jealous of the cheap flights in Europe though!

Thank you so much sweetie! 😍

One more interesting destination proposal by you !

Nice article and beautiful photos. I never been to Italy, but after reading your post i think I have to visit this country some day, maybe this summer...🌴🌞

Amazing post, it seems its a very nice place to visit :)

Thank you so much my friend! :*

I have been to Bergamo I agree with you upper city is more beautiful than the lower one. Unfortunately you were not lucky with the weather otherwise from the top of the hill you have a attractive view also of the upper city . I will keep posting about my country soon.

What a beautiful and detailed tour! Great photos!
Thank you!

Thanks for reading it!

Very nice and complete presentation, like all of yours. You have the talent of traveller! Italy, spring ... but what if you do not qualify for your first love? The statue of Arlechin is very special...

I am glad you liked it! not necessary first love, it should be just love

Such amazing photos of a beautiful place. Traveling is something that you'll never regret or forget. Many people remember every day of their vacation yet they are unable to tell you what they had for lunch last week.

It goes to show how much of an impact travel has on our lives.

Thanks for this,
Spencer Coffman

Thank you so much!!

You're welcome! I'm glad I was able to find your post!

Congratulations, your post was discovered and featured by @OCD in its daily compilation 220!

Thank you so much @jznsamuel & @ocd!! I voted already!

The detailing in your pictures are amazing. I enjoyed this article a lot. Thank you!

Wonderful photos, I am glad you enjoyed your time spend there. I want to eat tiramisu now :D