The market is filled with "buy the rumor, sell the news" type events on a daily basis. However, somehow even more of these events seem to show up as we approach the new year. This can be attributed to any number of considerations, but often relates to large traders, hedge funds and the like, using various tricks and "news plants" to prop up positions and end-of-year P&Ls.

One example of this is the recent after-hours "pump" of Juniper Networks (JNPR) by various news sources, which pushed prices up by 23%, from around $29.50 to over $36/share, on a potential buyout by Nokia (NOK) for as much as USD$16 BILLION, or over $45 per share. HOWEVER, about 2 1/2 hours later, Nokia issued its own press release effectively denying any truth to this "rumor"...

As would be expected, this news update immediately caused JNPR to give up nearly all of its earlier gains... 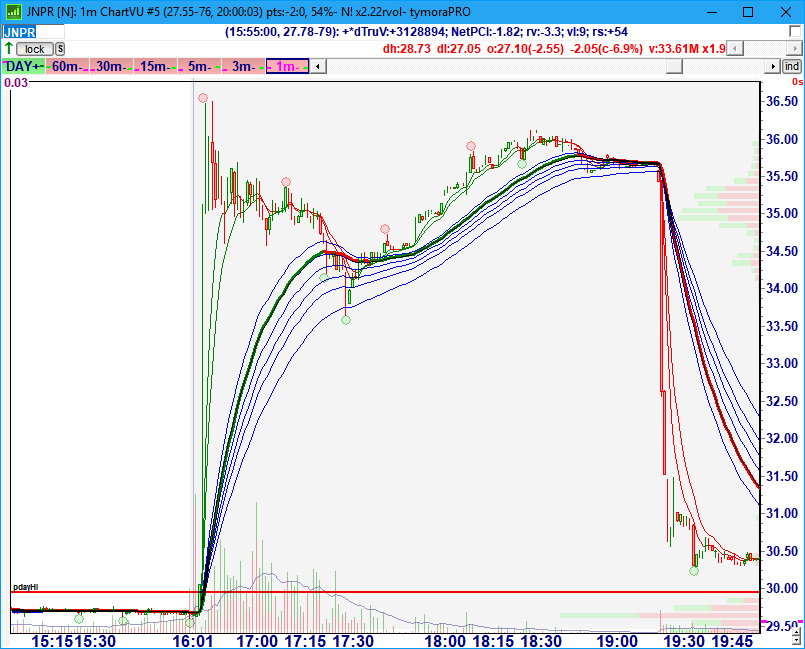 However, what you may not immediately expect or anticipate is that very often in cases such as these, the "hype" event manages to "suck" many weak hands into the stock, and as such, you can often expect not just a return to prior trading levels, but a panic sell well beneath those levels, as all those who purchased above the previous price level (prior to the original move) and held on are now carrying a loss. In this case, that move below prior levels took place pre-market open the next day (starting at 4am ET). For a slightly larger timeframe view of where this move reversed to, here is a 60 minute chart view versus the 1 minute view above, where you can see that the pre-market price sell-off tested the highs of the consolidation level that developed several months earlier before attracting enough buying interest to bounce back up and recover by nearly 10% shortly after the official market open. 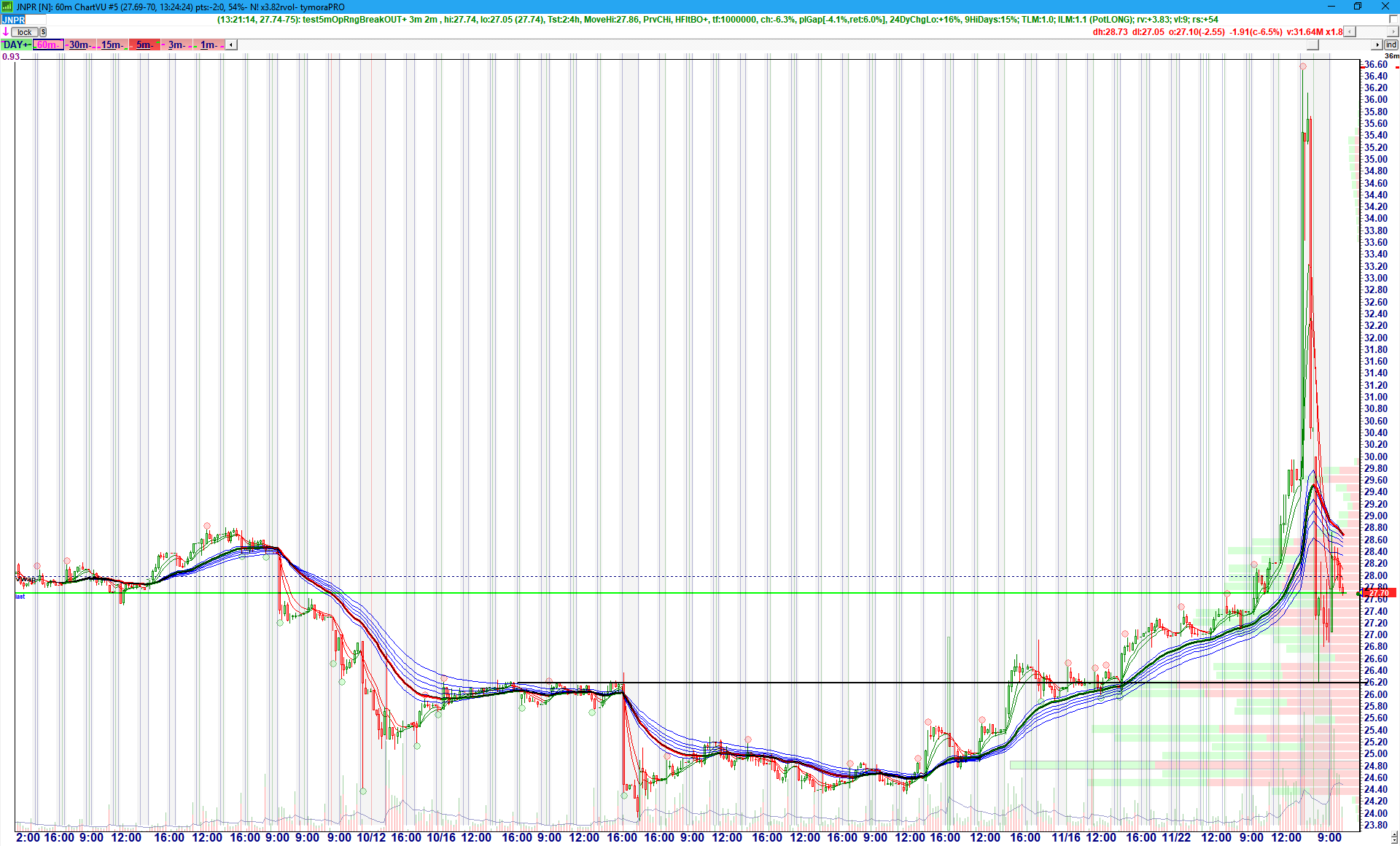 Okay great, but how does this relate to crypto?!

We can also find another example of this a bit closer to home, right here on STEEMIT. As I am sure many of you recall, shortly after STEEMIT announced it's initiative to release STEEM Smart Media Tokens (SMTs) sometime next year, the price of STEEM jumped up nearly 60%, from under $1 USD to nearly $1.60 USD. However, that new pricing level turned out to be relatively short-lived, as STEEM slowly and steadily gave back all of those gains and then some over the next 2 months.

Conceptually, all of those fellow steemians who might have "loaded the boat on STEEM" based more or less solely on the "amazing possibilities" that SMTs may, eventually provide, when they are released, some time in the future, but not quite yet...

All of these "investors" were now in a position to either "defend" all that "awesomeness" by watching more of their hard-earned money possibly evaporate, or they could more or less collectively all dump their STEEM before any more "bleeding" could take place, as STEEM broke down through multiple critical multi-month support levels. Interestingly, I have sometimes even noticed this phenomenon on solid news releases, such as substantive improvements in corporate earnings, as traders and investors still get overly excited, as prices stall out and the new weak-hands that jumped aboard end up dumping all their newly acquired shares right before the actual larger, more robust and sustainable move unfolds.

Martin Armstrong explains this quite well, discussing the concept of the "false move":

When gold hit $875 in 1980, the national debt of the US reached $1 trillion. We are now approaching $20 trillion. .. I thought gold could never go under the “official” pegged price. I was clearly wrong. With time, I came to see that markets always made a FALSE MOVE in the opposite direction before a big move. You need this type of false flag move for it cleans out everyone. .. So beware of market false moves. This is just the pendulum swinging to both extremes. It must do so to create the energy for the opposite direction.

And for those astute enough to realize it, that one quote also explains why both moves tend to reach extremes, fail, and sharply reverse, leaving everyone flattened out (like all those wounded on a battlefield) before the true market direction is able to express and exert itself.

As always, I appreciate your upvote, your follow and all your comments!
#steemit #steem #investing #beyondbitcoin
3 years ago in #trading by alexpmorris (65)
$61.14
83 votes
Reply 12
Sort:
[-]
freedomengineer (58) 3 years ago

@Alexpmorris - good article. I wonder if the same will happen to big Saturday launch of EOS STAT? Either way, I am going to HODL my EOS.

certainly a possibility, here's a fun triple short-squeeze in a week play and "pump du jour" that took place this week in PXS (the shipping / containership stocks have been hot for pump 'n dumps lately as well)... 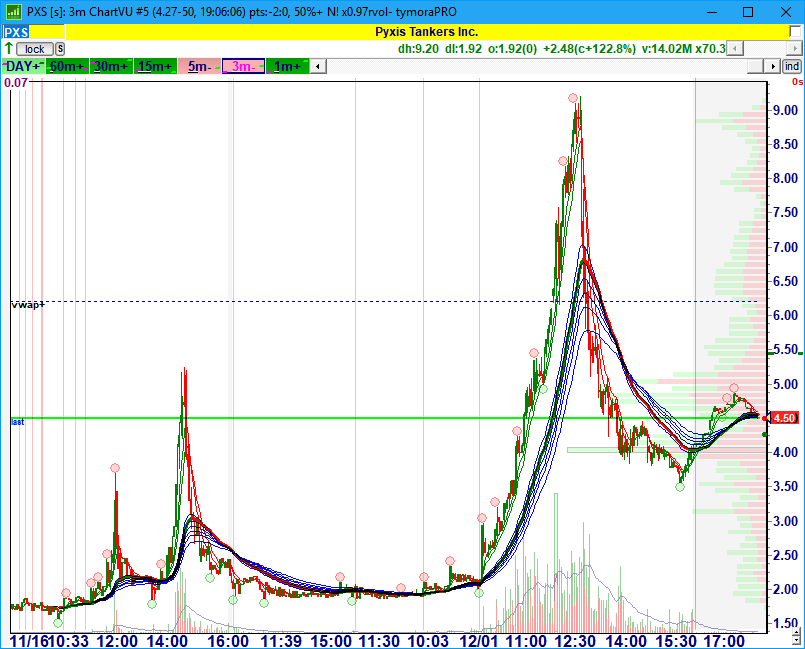 Not directly related, but for some reason I just felt compelled to share this, if only for the sake of posterity! lol

What i'd like to see is STEEM continuing a steady climb up. No hype, no rollercoasters. A steady slow upward trend that just doesn't quit. @ironshield

ah yes, I love those slow and steady upward trends, but unfortunately, somehow they too inevitably quit, at some point, and usually quite violently nonetheless...! 😱 These are great points. Thanks for the analysis and words of caution.

thanks for the kind words @wandrnrose7! :)

Thanks for the heads up on STEEM pricing @alexpmorris!

can you tell me without investment plan please??

I think this is part is great

That's a great point I appreciate your post @alexpmorris 👍👍