I always knew I lived in a one horse town. 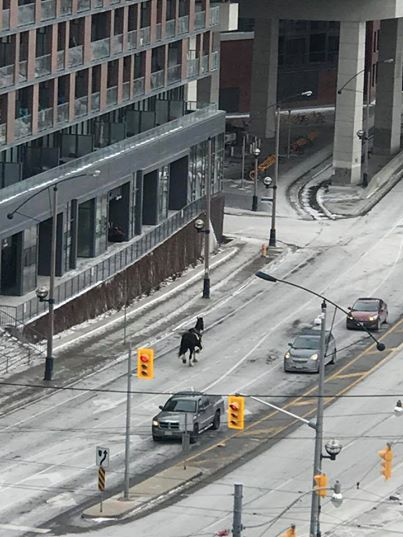 A local horse took itself out for a bit of a joy ride downtown on Monday afternoon wearing nothing but a vest to indicate its position within the Toronto Police Service.

The animal in question, a black police horse, was spotted by several people in the Fort York area yesterday without a rider on its back.

"I was on my balcony on the phone with a client and I heard this sort of 'clip clip clip clop'," said Toronto photographer David Pike. "So I turned my head and I saw a horse coming down Bathurst, just south of Front Street, across the bridge."

"There is an unmanned police horse running down Fort York," he wrote. "Happy Monday."

What gave Pike pause about the horse (aside from its vest and the fact that it was horse) is that it appeared to be "obeying the rules of the road."

"It wasn't going wild or crazy," he said. "It was just walking along the side of the road."
The horse did go up against oncoming traffic when it turned onto Fort York boulevard, but "thankfully people saw it and stopped," said Pike.

The horse just "continued on its way under the Gardiner" heading westbound toward Exhibition Place, which houses the illustrious Toronto Police Horse Palace (where our city's hardworking cop horses live.)

Police confirmed to the Star last night that it did lose a horse at some point on Monday afternoon, but that it was later recovered and nobody was injured.
https://www.blogto.com/city/2018/01/police-horse-takes-alone-downtown-toronto/ Sorry for your loss and congratulation!

@pushup and @allaz are acting irresponsibly by selling votes to people on their post in the last hours before payout. = 99.99% abuse.

GrumpyCat selects the best and most deserving posts to flag for greater impact. Congrats! Your post also earned a resteem by @GrumpyCat.

Hehehe. Was probably just trying to hand out some packing tickets.

The Cartoon Network has been replaying all the episodes of Black Jesus and early on in the series they cause a horse to escape while trying to steal some manure so there is this running sight gag they have of horses meandering around in Compton that is hilarious. This made me think of that. 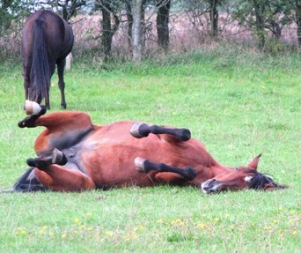 The horse is actually having fun
Nice one there @jpapa

Hey check out my theory about Bitcoin crash! Upvote and follow! I will do the same for everyone!! #vincentb

who will the cops punish for that? haha

You have made the Grumpy Report