Tech Bits #3 - How does a Lie-Detector Machine (Polygraph) work? Is it Reliable? 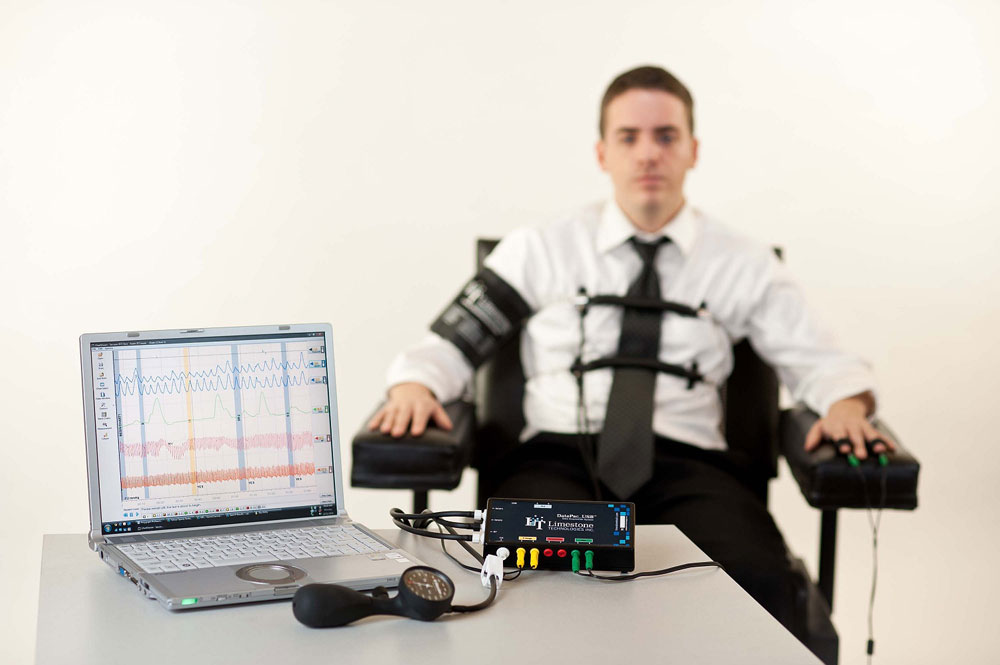 Many of us tell a few lies in our day to day life. Some lies are very small and don't even matter much. But some lies become very much important and game-changing when it comes to the statement of some victim or culprit in the court of justice.

In ancient times, there were many elaborate methods of lie detection which mainly involved torture. In the Middle Ages, boiling water was used to detect liars as it was believed that honest men could withstand it better than liars. [1] It's really weird! How can someone b that much illogical!

However, in the year 1921, a medical student at the University of California, John Augustus Larson and a police officer of the Berkeley Police Department, invented the machine which could detect a lie, Polygraph. [2] This lie detecting machine was torture free and unlike older methods, had some logic behind its operation. It was a breakthrough for investigation department and CBI. However, there were some doubts regarding its accuracy as it was a very new thing and thus, hard to accept. So, this was really a debatable topic and the efficacy of this machine (polygraph) is even debated today. The device was, however, improved to increase its accuracy and was later on purchased by the FBI. This updating and improvement is done even today, but we haven't achieved perfect accuracy yet.

How Does a Polygraph Actually Work? Lie-Detector Test | Wikimedia
Even though the accuracy of lie-detectors (polygraphs) is a debatable topic, still we hear about lie-detectors all the time, in police investigations and job applications (especially for some government jobs like CIA, FBI etc.). So how does this polygraph Test work? How can it detect a lie?

A polygraph contains 4 to 6 sensors which can measure and record physiological indices such as pulse rate, blood pressure, respiration, skin conductivity etc. When a polygraph test is done on a person, these sensors are attached to him. Then the polygraph machine detects multiple ("poly") signals from the sensors and records them on a single strip of moving paper ("graph"), however, nowadays it is directly recorded on a computer. It is generally believed that deceptive answers will generate different physiological responses than those of non-deceptive answers.

It generally records the following changes in the person's body :

During a polygraph (lie detector) test the examiner asks three-four simple questions in the beginning to establish the norms of the person's signals. This gives a graph for the normal physiological status of the person. Then the real questions, which are required to be tested, are asked. Throughout the questionnaire, all the data from the sensors are recorded by the polygraph. 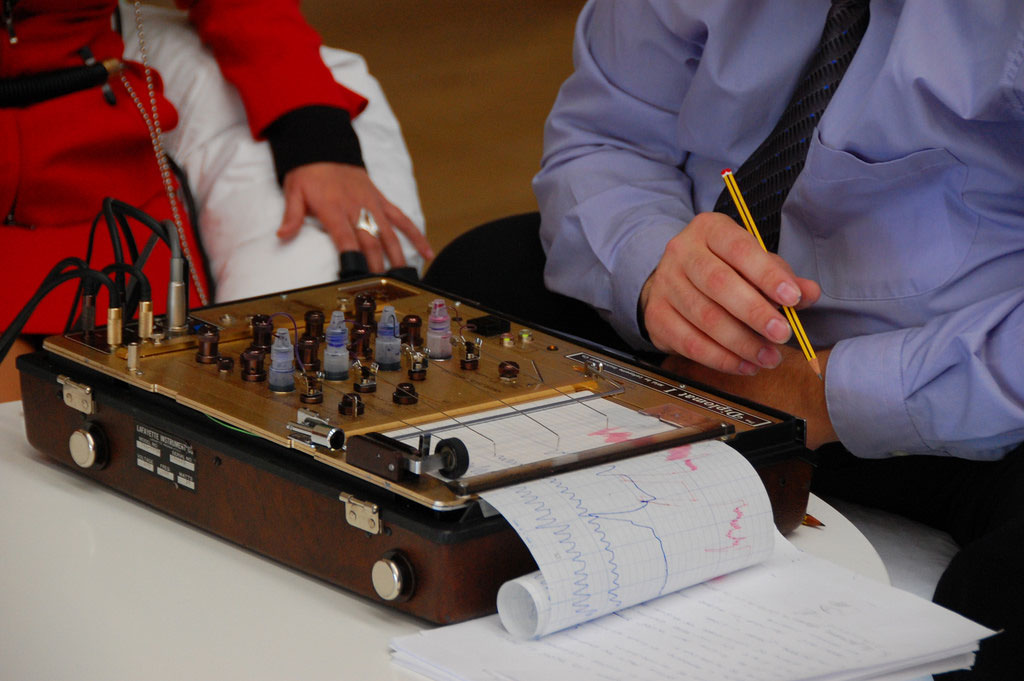 Output of a Polygraph Detection | Flickr
Both during and after the test, the examiner can look at the graph to observe any vital changes in it during any question. Generally, it is believed that a significant change such as faster pulse rate and breathing, higher blood pressure, increase in sweat, indicates that person is lying.

When a well-trained examiner carries out a polygraph test, then he/she can be very much accurate. However, because examiner's interpretation is totally subjective and different people react differently when they tell a lie, a lie detector test is not perfect and can be fooled.

Is a Polygraph Test Really Dependable? The polygraph (lie-detector) was on the Encyclopaedia Britannica 2003 list of greatest inventions, and it described it as one of the inventions that

"have had profound effects on human life for better or worse". [3]

There has been a lot of controversy about whether lie detectors work. Some experts have claimed that a proportion of persons whose statements proved to be true by the polygraph test, subsequently confessed to crimes. Some people even argue that the method of polygraph test is no more sophisticated than the ancient Arab ordeal for detecting liars.

In the Arab test, a hot knife blade was pressed on the subject's tongue. If the person was telling the truth, then his tongue would not get burned. The logic behind this is that when people are nervous, their mouth goes dry because nervousness suppresses salivation. The principle of lie detecting is more or less same as for a polygraph test.

So, the accuracy of a lie detector test is in doubt. Many-a-time a polygraph test generates a lot of false positives, i.e. even if a person is telling the truth, the polygraph test results show that he is lying. Although American Polygraph Association claims that the accuracy of the test is over 90%, top critics, like David Lykken suggest the accuracy at around 65%, which is slightly better than 50% which we can get just by tossing a coin [4]. This is probably the reason that in many countries lie-detector test is illegal and is generally not much valued in legal proceedings.

It is also argued that one can easily deceive a lie detection test by following some methods. Many people who passed the lie-detector test suggest that we can pass it by being calm and relaxed during the test and being confident in our answers. Another method to deceive the test is by enhancing arousal and nervousness even during honest answers so that it becomes difficult to detect the increased arousal theoretically accompanying lies. The internet is full of such methods and tricks to befool and bypass a polygraph test.

So it turns out that we cannot depend much on a lie-detector test. Hope we develop even a more powerful and accurate method to detect lies in future.

And if you find this post helpful then please give some time UPVOTE and RESTEEM it so that it could reach more people here. Thanks for reading. :)

All the image in this post are from Google Images which are "Labeled for reuse".

Previous Episodes of the Series

Want more stuff like this directly in your feed:

Also catch me on

A thorough illustration of Polygraphs. Very informative...Polygraphs as you mentioned acquire details of different things like Pulse, HR, Blood Pressure, etc. which normally are at optimum or have certian range for most of the People, but there are certian other persons in the world whose basic vital signs are bit higher or sometimes lower; Although they have a normal life. So polygraph in these conditions can have a deceiving result. Certainly there are some individuals who can tell a pure lie without any physiological changes happening to them, they have adapted themselves to such kindda change. Moreover there are some gruesome criminals who can fool Polygraphs as well.
So maybe Polygraphs can be True in almost 70 or 80 pc of cases but there are some Cases where it fails.
P.S. Great Post broda.

Yeah, some expert liars can easily cheat this test. :p

Had heard bout it but din't know. Thanks for it

If you are not guilty of anything - you have nothing to fear.

Yes, but if you are being tested by a polygraph then you cannot be sure about that as it gives many false positives. :p

I agree, and went to jail because of an engineer who badly tuned the device because he was not given sex by his girlfriend at home.

Waooooow the lie director works with the nervous system.never knew this. Thanks for sharing @nitesh9

You can fool polygraph test by training yourself (body functions) to be relaxed no matter what you say. When you reach that level of skill any lie can't be detected. Most of the people are not on that level, so I'm asuming polygraph test is correct for most of population.

Wow! @nitesh9, this is amazing. Hmmm I just learnt of the device now. It's a great one. @greatness96

Great stuff. Are you preparing this for some thesis or research work ? :) just kidding. Enjoyed reading your post. Keep it up.

I would say that still it's not 100% accurate, i heard that there are some people that can fool the lie detector!

That's what written in the post, if you read it completely.

Congratulations @nitesh9, this post is the forth most rewarded post (based on pending payouts) in the last 12 hours written by a User account holder (accounts that hold between 0.1 and 1.0 Mega Vests). The total number of posts by User account holders during this period was 2452 and the total pending payments to posts in this category was $2419.28. To see the full list of highest paid posts across all accounts categories, click here.

This post has received a 4.27 % upvote from @buildawhale thanks to: @nitesh9. Send at least 1 SBD to @buildawhale with a post link in the memo field for a portion of the next vote.