The Distributed Mesh Network and Conventioneering

lextenebris (62)in #technology • 5 years ago 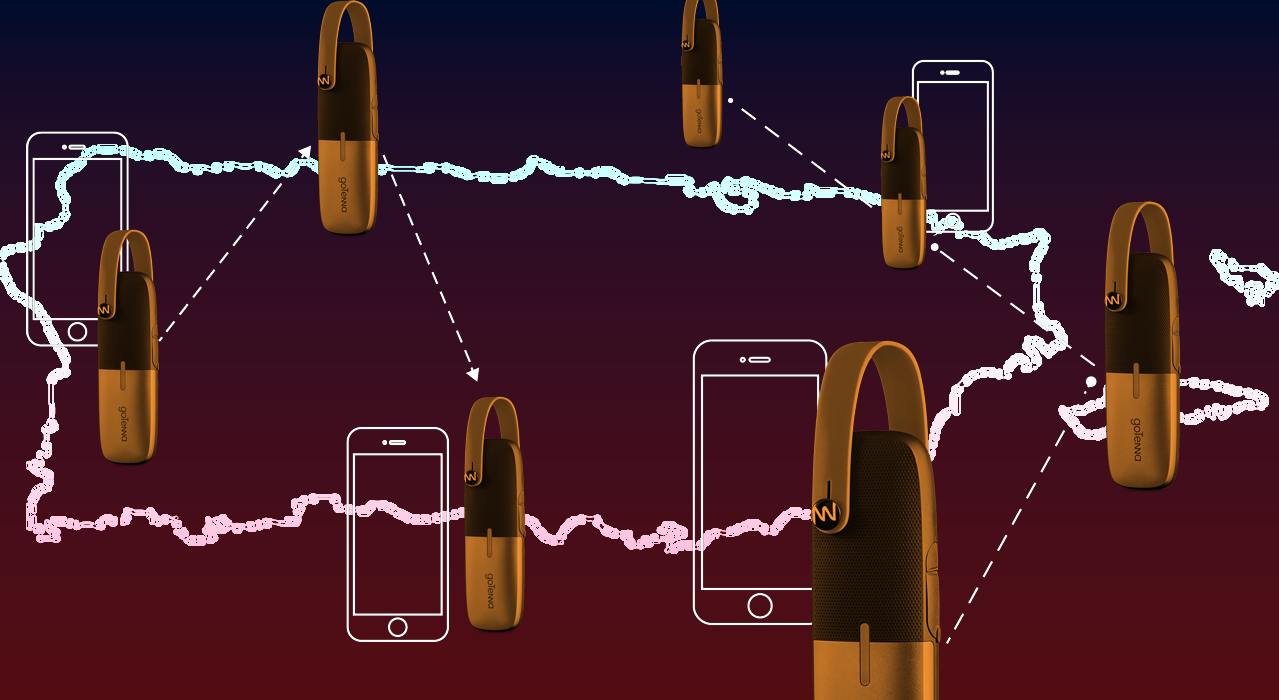 What the Mesh added was the ability to relay those messages: a chain or group of the devices will hear the message (it’s encrypted, of course) and pass it on until it reaches its destination. You can even set up your Mesh as a stationary relay, which in concert with other devices might let entire neighborhoods or even cities communicate, even in cases of a power or telecommunications outage.

I've been thinking about mesh networking for several years on and off now, and it appears that the time is right for the technology to break into the mainstream and really come into its own. There are multiple competing technologies and networks available for perfectly reasonable costs (and I will refer to a couple of more of them later as we go) which can lead to some really impressive, seriously world changing improvements.

I spend a lot of time thinking about conventions. Not "the conventions of modern life," but actual conventions where lots of people come together in one place at the same time for extended periods of time. In particular, my personal experiences with fantasy and science fiction conventions – DragonCon, Anime North, Anime Weekend Atlanta, large, well-populated gatherings of people. The kind where you show up, turn on your cell phone and discover that SMS/MMS takes 20 minutes to move a text to your buddies so you can all hook up at one of the several hotels and go out to dinner at the same time.

I might have a personal stake in this annoyance.

Come now mesh networking, the possibility of having devices which can maintain a separate network from that of the local cell towers. The local cell towers that get overwhelmed with even small gatherings, I point out. What potential do we have here?

According to TechCrunch, goTenna is doing a lot of work in Puerto Rico as a result of a guy in the local area who is involved in the reconstruction efforts who had the wild and crazy idea of giving someone a call who had exactly the technology that would be great to deploy in a situation where over 95% of your communications infrastructure has just fallen over. That sounds like damning with faint praise, but I mean it. Actually going out of your way to make the call to someone who can solve your problem is sometimes shockingly unlikely.

In the context of convention-going, if I were a department Director I would seriously consider picking up at least four of these devices in order to make sure that my people could stay in contact at all times. So many problems can be solved by a timely single text message that lets someone know what's going on.

Who wouldn't want one of the solutions in their pocket?

GoTenna is on the market now. You can get two of them for $180 or eight of them for just under $600. That's not a bad deal – can we do better for a long-range radio connected to a cell phone? Sonnet brings the long-range wireless communication of the walkie-talkie to the smartphone. It connects to your smartphone via Wi-Fi, and it will relay any data sent from your phone to other Sonnet devices via the long-range radio wave. This completely removes your smartphones’ dependency on the cellular grid and other network infrastructure, an allows it to be used even when you have no cellular connectivity or internet access.

Unsurprisingly there's a Kickstarter that has completed for a device which might actually be better than a goTenna. Of course, in the real world a device that you can actually get your hands on trumps a device that is still in preorder every time, but since we're dealing with a sort of speculative consideration, let's look at what we have to deal with.

The Sonnet is roughly the same size as the goTenna, maybe a little bit larger because it's shaped as a large hexagon rather than a pendant-like dangler, but it's a little flatter and designed to attach at the back rather than to hang. Mechanically, it should be roughly equivalent to carry. The Sonnet software, however – there's your differences.

Want more than just text? Image data and voice recordings (not to mention GPS location sharing, but goTenna can do that). Want a 9-mile line of sight range? Got that. Want a 4000 mA hour battery? Got that, apparently. Want 10 of these little bad boys for $400? You can have that.

The big difference here is that the device actually creates a standalone Wi-Fi access point which you connect to with whatever device you want to be on the mesh and then open your browser, connect to a standard web address – and away you go. In theory, this is a lot better than requiring a specific application which speaks to your device. After all, people can be kind of leery in emergency situations when you say, "all you need to do is download or sideload this unknown program that I'm handing you and…"

TechCrunch points this out as a specific problem in the Puerto Rico situation, and I can believe it. I can just imagine trying to convince people at random to install software that I'm handing them from the inside of my trenchcoat. Not bloody likely.

With the Wi-Fi AP, however – in theory, you could have multiple people connected to the mesh through a single device if they're in the same location, and with the actual communications provided by a web app on the device itself, you'll have a much easier time convincing people to actually use it. (Whether multiple people can use the same device at the same time is currently unclear to me, but I can imagine such a thing is possible.)

But those are pricey. They all require devices which are extrinsic to your cell phone, need to be logged around, and also need to be charged along with your access device. The range is incredible, especially if you have plenty of people who have the same device with the same network and a desire to communicate… But that's hard to arrange. It's a big investment. What if you just want to use the gear you already own tucked into your pocket? 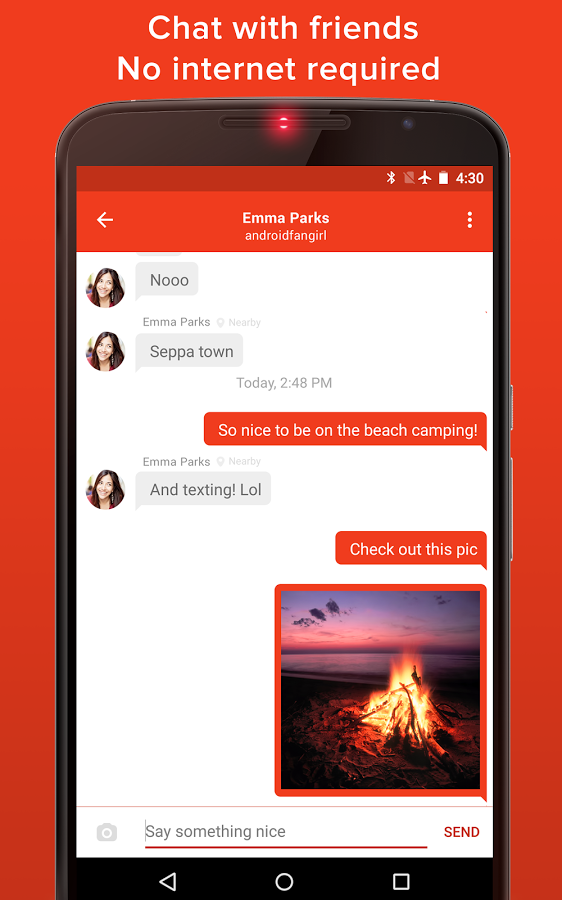 The one thing in your pocket that you have aside from a truly disturbing amount of computational power is at least two types of wireless networking. Wi-Fi everyone thinks of as a data transfer mechanism, but Bluetooth is often overlooked. The range is kind of crap, the power is usually kind of crap, and it just doesn't carry.

But does it carry enough?

We're talking redundant networks here. While Bluetooth isn't going to carry to the next building, it's more than good enough to reach to the other side of the room and often a couple of rooms away. If your Wi-Fi will do the long haul but you don't need that much power, the much lower power consumption BT networking can keep you talking to the other members of the mesh for many, many hours longer.

What if you had an app on your phone I could use the hardware you already have to set up a mesh network, making use of both forms of network conductivity?

It uses both Bluetooth and Wi-Fi to connect to other users within an advertised 200 feet (who must also be using Firechat, of course). It's a free app. You don't have to buy any technology, any hardware, or apparently any software to participate. It has a broadcast mode so you can conference with other users who happen to be in the same space. And, for the purposes of this article, the most important thing is that it also creates a mesh network.

I started this by pointing out that I'm thinking about these issues from the perspective of someone who spends a lot of time at conventions with overwhelmed cellular networks. For the purposes that we're talking about, there are both positives and negatives.

One of the advantages is that you are spending far, far less than $100, or $50, or $5 to get on board with mesh communication. I can never overestimate or overstate the importance of saving that money to buy falafel at two in the morning after you've been on shift for 18 hours. You don't have to buy anything, you don't have to commit to anything, and by extension, it is extremely easy to get other people on board with you with this sort of tool. They don't have to make any investment either.

The big disadvantage is obvious: your mesh range is almost nothing. This doesn't make any difference if you know that everyone involved in your network is going to be in the same ballroom or in the same group of connected conference rooms or scattered amongst the tables at one of the larger subterranean gaming habitats that large conventions always seem to push tabletop into. This may be a non-issue in those situations. The rest of the time, especially when staff members may be coming on and going off shift so that you can't reliably have people on a regular basis within 200 feet of each other – that's a problem.

When I came in, I knew that I wanted to share with you some exposure to new technology that's been in the news and help you think about it in a way that you might not otherwise have. Is the new wave of mesh networking an absolute boon for areas with limited connectivity in emergency situations? I don't think that was ever in question. In fact, if anything it's surprising that more mobile solutions haven't been deployed before now outside of the packet radio/ham radio community.

Most of us won't be in an emergency situation much of the time, but quite a lot of us will be in a situation where cellular conductivity is severely impacted. If you can plan ahead and you have the money, you can make sure that no matter the situation you can be in touch with your team. If you plan ahead and you don't spend any money, you can at least put yourself in a situation where you and your people can communicate even in terrible conditions. If you don't plan ahead, if you don't know what you can do, then you will be stuck trying to find that one critical teammate who is trapped in an elevator trying to get down from the 18th floor on Saturday night.

Be smart. Be safe. Know your mesh technology.