A Peek At Jet Engine and Afterburner

Well, they say that boys love their toys. Maybe. A wise old man, always wondered why all the wise sayings are usually from an old guy, once said we have to live dangerously at least once in our lives. That I agree, instead, I live dangerously every day. I destroy a lot of cars that would take me a 100 lifetime to repair/replace. I drove through the red lights while the town's police are on my neck. Most important of all I escape by pressing my lead foot down on that accelerator. What I enjoy the most was the afterburn as I make my quick getaway from the cop after I ditch my battered Ferrari for an F-16 jet as fly to freedom in a supersonic jet. 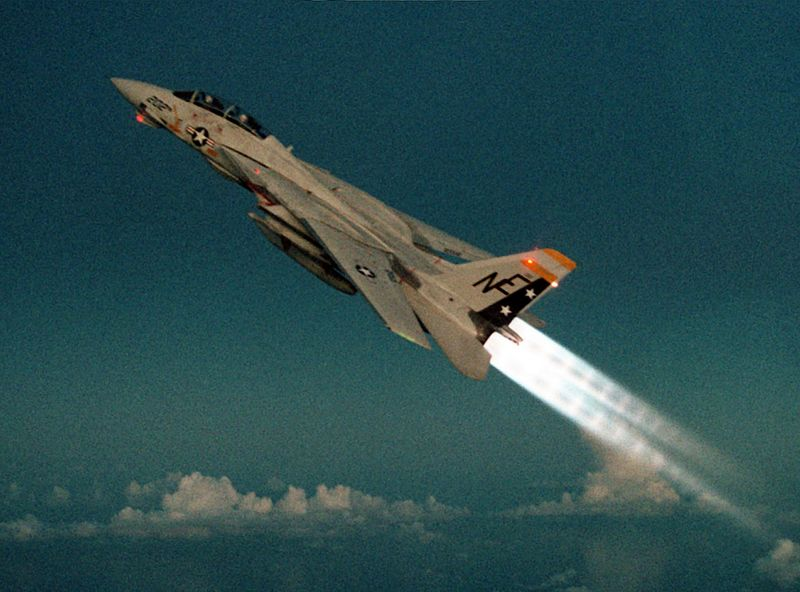 Playing a PS game is an excellent exercise.

Did anyone already call the cops on me? Haha, I love my games, and of course the afterburner.

The afterburner is a way aircraft, particularly for military application, and combat jets augment thrust to move at a faster rate.

The image on the right shows a 2-spool high-bypass turbofan.

The two spools, low and high pressure or turquoise and yellow all rotate at different rates. The low pressure (turquoise) spool rotates at a slower rate than the high pressure(yellow) spool.

If you look at the animation again, you will notice that only a small ratio of the air flows through the turbines (6 and 7) compared to the air that passes through the fan(2). That is why the engine is referred to as high-bypass turbofan. The aircraft that employs high bypass turbo-fan engines are for applications where speed is below Mach 1.6 or sub-sonic levels. For speeds, more than that, the turboprop or turbojet engines are the gear of choice.

The bypass ratio (BPR) of turbofan engines provides a relationship between fuel consumption to thrust produced by the engine. Low bypass engines create a higher thrust engine capable of flying supersonic with the ability to use afterburners. But this increase in thrust comes at the cost of fuel: it consumes more fuel than the high bypass turbofans usually favourite in commercial passenger jet transports. 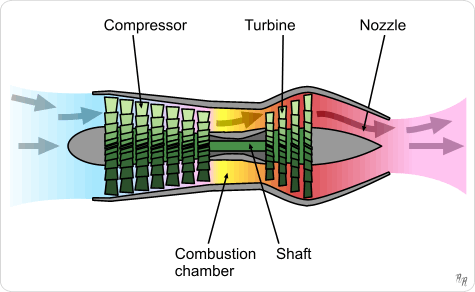 The low-pass turbo operation on the right allows form more air into the engine which is more than the high-bypass permits. In the turbojet operation, all air goes through the engine (zero bypasses) which gives the most thrust for all the other types of engine.

The third law of motion is very much at play in a how a jet engine operates. Every action will have a corresponding reaction in the opposite direction. So for the forward thrust in a jet to happen, the engine takes on a massive supply of air which it disperses in "jet speed". This technology ensures that the jet can move faster than the conventional only propeller-driven aircraft.

The turbofan can be likened to a propeller inside a duct. Modern jets have the capability of sucking in 1.25 kilotons of air. It can suck the air out of a standard stadium in one minute! So steer clear of the jet engine during takeoffs to avoid being sucked in as happened on Jan 16, 2006, at El Paso, Texas USA. It was fatal. 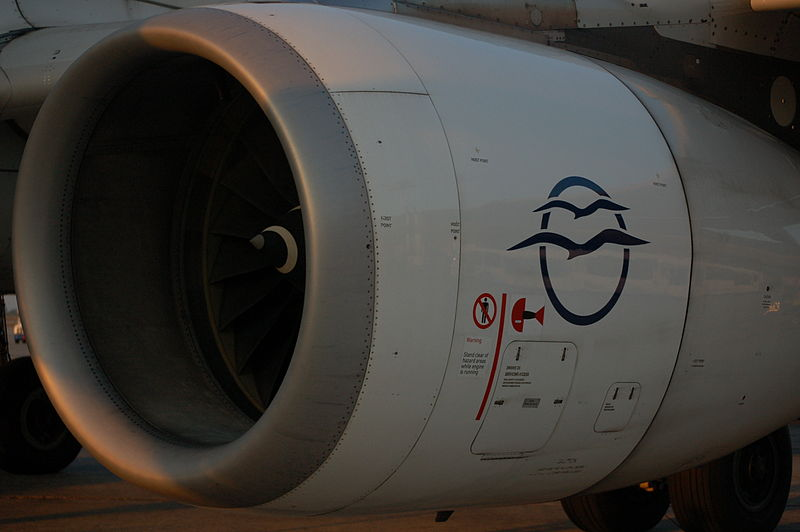 Warning: Stand clear of hazard areas while the engine is running.

Inside the core of the jet engine is where the gas is created with the air coming in compressed, and mixed with fuel for combustion.

Incoming air is compressed by the compressor which in turn is forced through a narrow passage. The compression enables more efficient combustion.

The compressor as can be seen above in the animated image is the part numbered 3 and 4. It is the rotor which has blades that spin. After the compressor, we get to the combustion chamber labelled 5. This chamber is where the air and fuel combine and ignite.

And now to the favourite part of the article-the afterburner.

The afterburner device is fixed after the core (behind it) which is at the front side of the jet pipe. Here, more fuel is sprayed into the jet pipe and ignited. The jet engine contains both the exhaust gases and the afterburner combustion process.

The adjustable exhaust b=nozzle is usually open to its maximum to avoid the situation where the pressure initiated at the rear of the engine will be forced on the forward engine part.

Afterburners involve the tradeoff of fuel over some 40 to 70 percentage more thrust. In the real essence, afterburners are inefficient.

The F-16 uses up 64,000 pounds of fuel in full afterburner when flying at low altitudes. This reduces flight time to about 20 minutes until emergency fuel warning lights up. It achieves speeds of up to 700-800 knots.

In regular flight, full throttle speeds of between 450 to 550 knots are achievable with up to 2 hours of flight time. Therefore you can see that it burns fuel up to 8 times more while achieving less than 60% speed boost.

Therefore afterburners are only employed in emergency combat situations, taking off from short runways (especially from ships) where the burst of speed is necessary to achieve a safe takeoff.

Though exceptions to the rule apply, the SR-71 Blackbird is capable of being efficient with afterburners since it does not gulp such massive amount of fuel.

Interesting read.
Geared turbofan introduced in A320Neo can be your next post :P

I am reading up on that. Thank you very much for the suggestion. I have some internet issue, but I am back like a sore penny. Lol

Another cost of AfterBurner is that it increases the heat signature of jets, thus, exposing them to the enemy radar and fire.

It does increase the heat signature of the aircraft, but I guess it'd be gainful since the jet will be long gone before the enemies could get their guns ready.

That's a nice summary @bitfairy. The jet engine is such a remarkably simple concept (although the engineering and metallurgy behind it probably isn't). I have seen some video's of some people who have actually built jet engines from readily available bits like turbochargers and even tin cans. How cool is that :)

The metallurgy behind it is one of the marvels of engineering. I see some websites selling working kits at less than $200 with detailed step by step on how to assemble your jet engine. I think it's a pretty cool hobby.

Interesting and creative article. The introduction got me :).

Are you a gamer too? It's a great way to live dangerously, albeit from the comfort of your sitting room's sofa. Lol.

If I do 0.01% of what I do on GTA, I'm sure I'd be serving lifetime sentences back to back already.

Don't try this at home comes to mind. But I do all the "bad" work at home. Hahahaha

Afterburner! Is it the nitro mode car race game lovers use?

This is quite nice @bitfairy. I really enjoyed it and I learnt a lot.

Nitro gives a boost to cars same as afterburners do to jets.

Oh, cool... What about those in rockets?

Same thing, more boost to either launch or escape in combat situations, or just to get to the destination faster at the cost of fuel.