The book “Holes“, written by Louis Sachar in 1998, describes a very dangerous reptile named the “Yellow Spotted Lizard“. This very dangerous fictitious lizard can be compared to the naturally occurring predator „Black Mamba“, the scientific name is dendroaspis polylepis. The snake is one of the top ten venomous snakes of the world. The following context details the anatomy, habitat, diet, reproduction and bite of the Black Mamba. 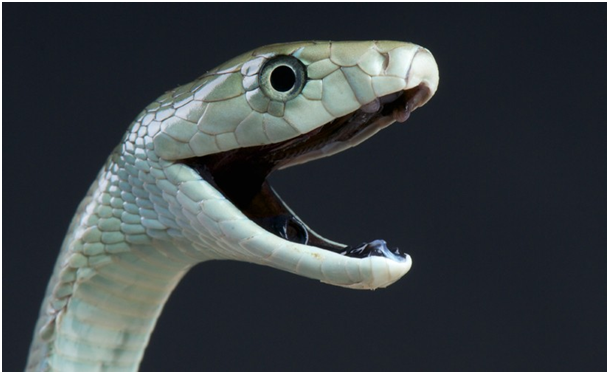 Anatomy and Description – Not so Black
Black Mambas are not black in colour. They have been named “black“ due to the inky-black interiors of their mouth. They occur in various shades or colours, of which the most commonly observed is dark gray and white. A significant number of animals also occur with a brownish or khaki coloured surface. Juvenile Black Mambas are light coloured and display an olive brown or pale gray skin tone. For this reason, they are often confused with the Green Mamba. Habitat – Warm and Cosy
The habitat of the Black Mamba can be divided into geographical region, terrain type, temperature and preferred living conditions. Generally, the Black Mamba lives in south and east Africa in savannas. It prefers to be in rocky hills and open woodlands. The very fast moving, lonely, black snake prefers to sun itself at 30°C. The reptile enjoys sleeping in hollow and dry trees. Regularly, the snake also looks for rock crevices and burrows to find a place to rest. Rarely, empty termite mounds also make for a good but beneficial meal and location of rest. 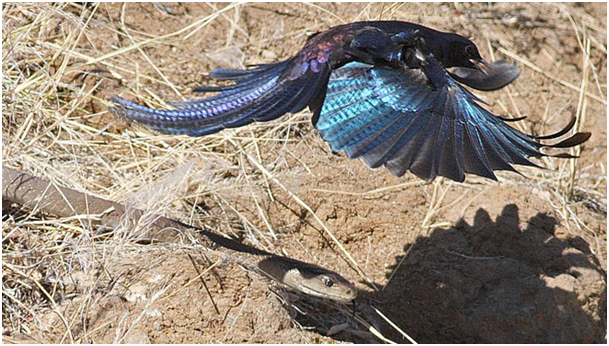 Diet – Small Animals
Black Mambas are highly aggressive predators. They often feed on small mammals, amphibians and reptiles such as full-grown cobras. Birds in trees are a favourite delicacy for the Black Mamba, even whole parrots. Black Mambas also swallow eggs laid by birds and other reptiles. Bush babies, rock hyrax and bats are also a valuable part of its daily diet. Black Mambas eat their food whole and have flexible jaws which they can dislocate in order to fit food, four times the size of their head, into their mouth. Competitive Reproduction
The Black Mamba breeds once a year with its mating period in spring. Like all reptiles, Black Mambas reproduce sexually. The breeding season is a period during which male Black Mambas are aggressive. Both male and female adults have the same appearance. Black Mamba males fight for the right to mate with a particular female. Male Mambas locate their mates by following the scent of the female. Female Black Mambas have a gestation period of 60 days, after which the female produces a batch of 6 – 17 eggs. The female incubates the eggs for a time span of 60 days. The female Black Mamba builds a nest of dirt, twigs and leaves. Juvenile Black Mambas break through the egg shell with an egg tooth. They are born with venom glands making them lethal within minutes of their birth. 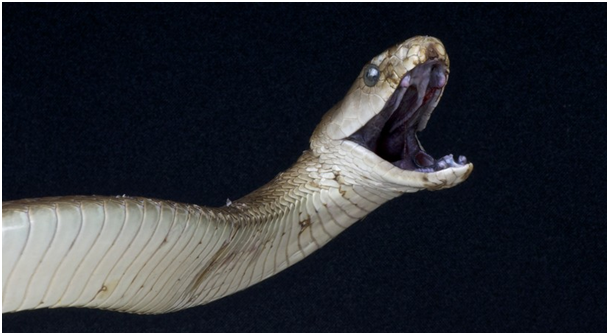 The Deadly Bite
The Black Mamba is an ambush predator. Hunting takes place from a specific position and location, whereafter the snake returns to its regular residence after feeding. When killing, the Black Mamba raises a part of its body off the ground. It doesn’t latch onto its prey, but injects a dose of venom through a bite, after which it waits untill the prey is paralyzed and dead before feeding. Just two drops of the potent Black Mamba venom can kill a human, the venom of Black Mamba contains neurotoxins and is fast acting. It shuts down the nervous system and paralyzes victims. Without an antivenom, the fatality rate of a Black Mamba bite is 100 percent within 30 minutes to 3 hours.

Conclusion – Be Careful in the Bush
The Black Mamba is a snake and predator by the scientific name of dendroaspis polylepis. They have inky-black interiors in their mouth and occur in various shades or colours. They live in the warm regions of Africa and hunt by first killing small animals with their venom before eating. The Black Mamba breeds once a year and lays up to 17 eggs. The juveniles are immediately leathal. The snake is one of the fastest and most leathal reptiles on earth.

@speed-harry you did a great job on this essay.

Thank you very much. Which paragraph did you like the most?

Yes I did read the essay @luck-digger

WOW. I just skimmed it the first time.

My favorite paragraph's were competitive reproduction and deadly bite. I sometimes catch snakecity and they retrieve a lot of black mamba's. I learnts something new. Thank you

I like your essay. Where did you collect all the data from?

The data I collected is mostly out of National Geographic and Wikipedia.

Oh? National Geographic? Which website do you exactly mean? Interesting.