WELCOME TO MY JUNGLE

What a stupid title. If you're still reading, you're a very generous person who gives even losers the benefit of the doubt. I commend you for it. Titles are not my specialty. I've published three books. Not one of them has the title I gave it. My editors are always like, "Um, yeah, we like your work, but your title is a pile of rat dung. Let's rethink it." You can see why. 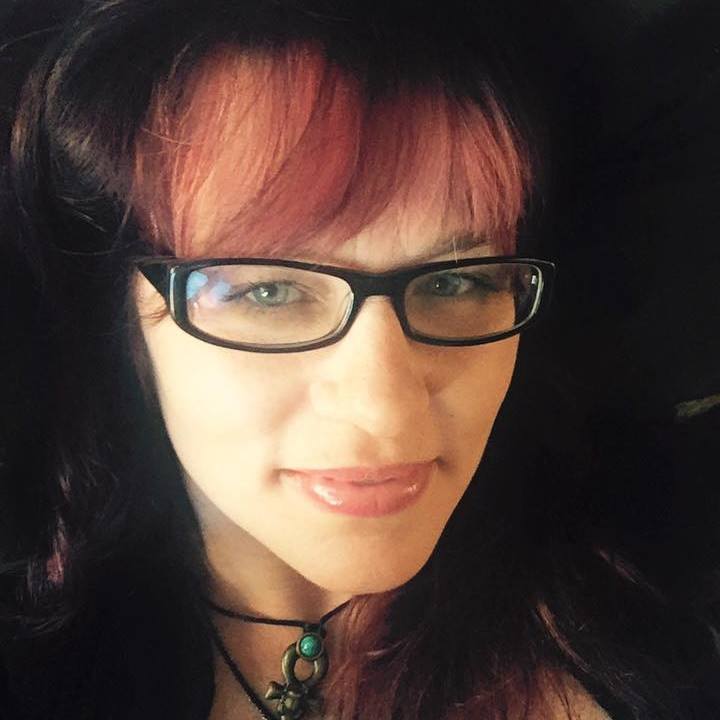 So anyway, hola, new realm of cyberspace. I came upon this platform a few months ago, when I was lucky enough to be on a writer’s retreat in a cabin in the Pennsylvania woods with some kickass women who are part of the Steemit community. The retreat was epic, in case you were wondering. Exploding toilets. Dead landlines and zero cell reception. Creepy basements. Gorgeous women running around mostly naked in the woods, drunk on bourbon. I’m not sure why the serial killers gods weren’t alterted to our presence. We were a horror movie in the making.

But against all odds, we survived, and now, two months later, here I am on Steemit, introducing myself because one of the kick ass writers from the woods told me to. She was lovely. A vision. I’m almost sure she actually existed in real time, and not just in my whiskey addled brain. If she’s a lovely hallucination, she’s a persistent one. She writes me on Facebook now. She says I should begin my Steemit career by saying hello and telling you a bit about myself.

So, I’m gonna go all support group on you and say, “Hi, my name is Tawni, and I am a travel-o-holic.” (This is me in Sicily this year. I went to teach for Rosemont College's study abroad MFA program.) I’m actually a professional writer who has lived on the road full time for three years, since the release of my first novel, Beauty of the Broken, by Simon and Schuster. I’ve released another novel, The Long Ride Home, and a poetry collection, Siren Song, since then. I’ve won some awards. The first novel is now being adapted for the screen by Jeff Arch, the screenwriter best known for Sleepless in Seattle.

In addition to publishing three books, I’ve published in many, many magazines and journals. My work has been anthologized in many places, including Best Travel Writing 2010, The Soul of A Great Traveler, and Monday Nights. Yada yada yada. Right now, I am living in Philadelphia in a castle-esque manor on the Rosemont College Campus, as I am writer in residence here this semester. (This is the house. Amazing, right? You should see it all decked out for the holidays, as it is now.) 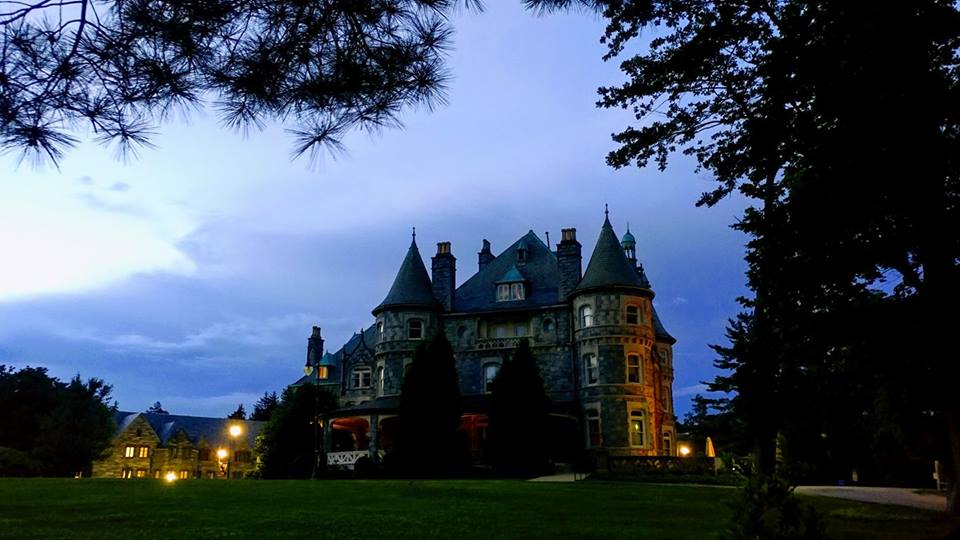 After this I go to New Mexico, then old Mexico (to teach at a writer’s conference), then to live in France for a while, where I will live in another castle-esque manor provided by the people who have offered me a residency. Here are children in France learning about me and my work just yesterday. 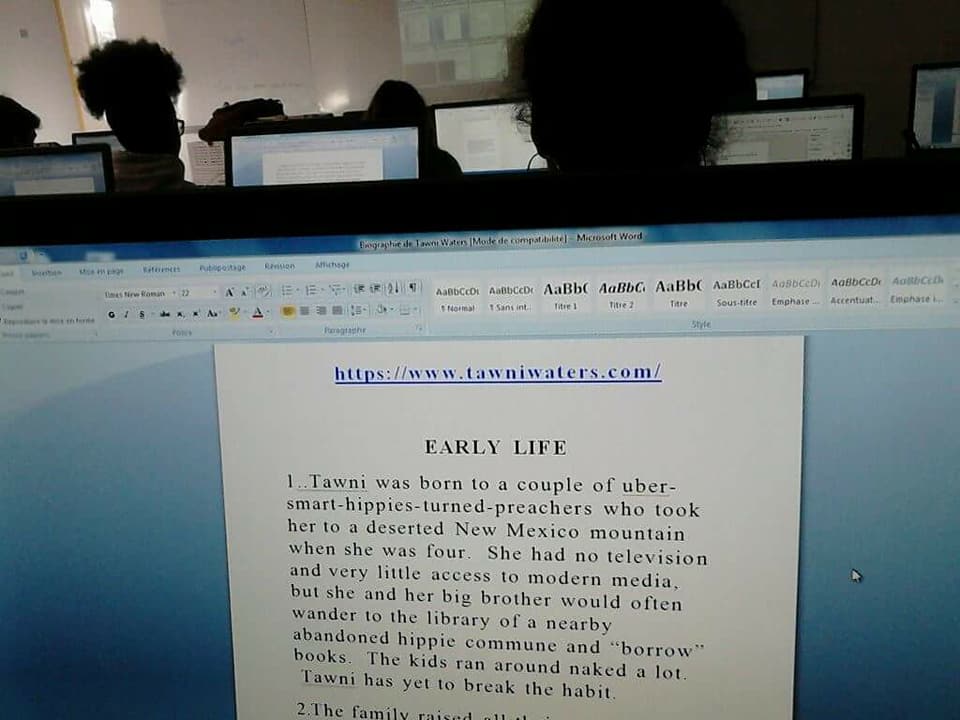 I almost cried when I saw these photos. My work lived in my dresser drawer for years, so to know that students across the globe are suddenly being forced to read it and memorize random facts about my life warms my sadistic little heart. Also, I love that their teachers have to ask questions like, “What was the name of the rock star Tawni was a groupie for, before she sold her work?” and “Did Tawni ever grow out of running around naked, the way she did when she grew up on that uninhabited mountain in New Mexico?” I think all tests should include questions like that.

I love living on the road. I resist stasis of all kinds. My last official relationship was five years ago. (Shortly after I escaped him by hiding in friends’ basements, the guy ended up in prison for killing someone. No lie. You can see why I don’t get all gooey and fuzzy at the thought of romance these days.) I have two grown children who, predictably, are the light of my life. I adore them beyond all reason. Also two chihuahuas, Isis and Ra, who live with my daughter in New Mexico. They are named after the Egyptian gods, with whom I am obsessed. Fuck those guys who made Isis into an ugly word. She was a kick ass goddess. I write about her often.

What else? I’m a feminist, a terrible dancer (but that doesn’t stop me from trying), a wine lover who knows nothing about wine (but that doesn’t stop me from drinking it), a former actor (you should see how dramatic I get during my readings these days), a lover of all living things (except for Donald Trump), and a kick ass writing teacher. At least my students tell me I’m kick ass. Maybe they just want good grades. (This is me being Medea a few years back, before I started selling books and didn't have time to act anymore.) 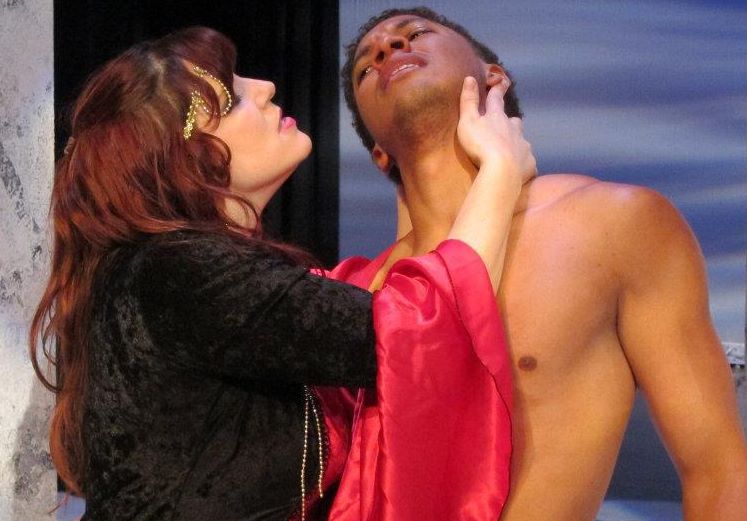 Ok, I’ll shut up. If you haven’t nodded off in a pool of your own drool by now, and for some inexplicable reason, you want to know more about me, my website is tawniwaters.com (This is me dancing at a rock show. Told you I was a groupie before I was a professional writer.)

Congratulations @tawniwaters! You have completed some achievement on Steemit and have been rewarded with new badge(s) :

Welcome to steemit @tawniwaters. Join #minnowsupportproject for more help. Type in the comments of a post @OriginalWorks and it will help you verify that content is original.
Transfer SBD to @treeplanter to plant trees and get an get an upvote in exchange of your donation (Min 0.01 SDB)
Upvote this comment to keep helping more new steemians
Transfer SBD to @tuanis in exchange of an upvote and support this project

The @OriginalWorks bot has determined this post by @tawniwaters to be original material and upvoted(1.5%) it!

your jungle is nice, rocking show,

Thanks so much! I'm glad you like my jungle. I'm thinking of putting up elephant wallpaper.

Not going to lie - I have such major wanderlust and I am incredibly jealous of your travels! Anyhoo - welcome to Steemit! :)

Thank you so much! The traveling is awesome! I feel lucky! Have you traveled much?

Yeah, mainly Europe and South East Asia. As soon as I can afford it, I'm hitting the road again!

Thank you so much! It seems like a super cool community! (I thought I already replied to this, but apparently, I suck at replying.)

Thank you, Kyle! I'm so happy to hear that. It seems like an awesome space!

@tawniwaters welcome to steemit, nice introduction there is also chat and discord where you can chat with other steamers, greetings from belgium

Oh, how cool! Thanks for telling me about the chat! I will check it out! And thanks so much for the warm welcome!

welcome to the crypto-currency universe

welcome to steemit and cant wait to see more post!

Thanks so much! I appreciate it!

Welcome to the great adventure Steemit, you will meet many more interesting people than others. Looking forward to reading you ^^

Thank you so much! I feel like I've already met interesting people! I look forward to reading you as well!

Such love for your wild spirit, and so glad you're here! When we're old (never!), we can say "we'll always have Steemit and the central PA woods." <3

Aww, thank you, Stacia! I have such love for YOUR wild spirit! And yes, we will always have those woods (as much of them as our bourbon addled brains took in, anyway)! We must do it again sometime! <3

Hey Tawni, welcome to steemit ;)
Great to have an author here - maybe you want to check out @asperger-kids, she is writing a novel here on steemit! greets!

Thanks so much! I'm happy to be here! And I will definitely check her out!

I want to follow you!! YEAHHH you sound awesome! <3

Thanks so much! I'm following you as well!

Welcome to Steemit! You have a great intro post I look forward to reading your work here :)

Thank you, Julia! I look forward to reading yours!

I’m so happy you are here!!

Thank you, beautiful Shawna! (Does anyone else see Shawna? She is the lovely hallucination from the woods. I want to make sure she's real.) Thank you for bringing me here!

Cool intro. Welcome to steemit! I like your writing style. Following.

Awesome! Thanks so much! I'm following you as well!

Awesome intro!
You seem hilarious, serious, down to earth and so many other things.
Welcome to Steemit!

Thank you so much! I'm excited to be here!

That was the best intro post I've read so far. I'm definitely going to check out your books. They look like my kind of story.

I just saw this! I'm sorry. I have no idea how this site works, to be honest. I'm learning! But thank you so much! I'm following you! (I do know how to do that much, at least.)

Wow. What an intro. It took no persistence at all to read on. I'm an aspiring author myself, but I haven't been working on it as long as you have. Can't wait to see what you come up with! Welcome to steemit.

Thank you so much! It's great to meet another author! I can't wait to see what you're writing!

Some short stories so far. I've been writing to sharpen me skills with the help of the Writer's block, a community of writers dedicated to helping each other improve.

You are adorable, and just earned yourself a follower. Running around drunk and naked in the woods? Can you invite me to the next retreat please? :)

Ha! Thank you! And you earned yourself one as well! You are so on the guest list for the next retreat! <3