Sunny Leone as a fitness guru a new show

Sunny Leone is all set to become a fitness guru with her upcoming show 'FitStop'. The show will go on air in November on the channel MTV beats. Sunny Leone is currently gearing up for her film 'Tera Intezar' opposite Arbaaz Khan which will hit the screens on November 24. 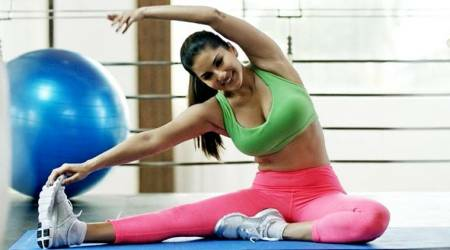 Actor Sunny Leone will don the avatar of a fitness guru for an upcoming TV show ‘FitStop’. The hour-long show, which will air on MTV Beats, will see Sunny motivating viewers to stay fit and healthy with easy-to-do exercises, read a statement. The aim is to bring great music and exercise together.
The actor says she is a “big believer in working out to keep fit — both physically and mentally”. “Everyone should make some time in their daily schedule for some quick exercises. I know exercising can be a chore and to make it exciting for people, I’ve teamed up with MTV Beats to launch ‘FitStop’ — where I’ll be showing people how to exercise and also treating them to some fabulous music which will help them work up a sweat,” she added.
The ‘Jism 2’ actor, who also hosts ‘MTV Splitsvilla, added, “Kick-starting each morning with a smashing playlist and some easy-to-do exercises is going to help you up your energy levels and motivate you to push through the day. I’m super-excited about donning this new role of a fitness guru on television.”
Earlier Sunny Leone has also presented a YouTube show titled ‘Super Hot Sunny Mornings’ on the channel Times Living. In a six-episode series, Sunny Leone was seen sweating it out with some amazing exercises. The workouts were designed by fitness guru Micky Mehta.
Sunny Leone is currently seen hosting the tenth season of ‘MTV Spiltsvilla’. She is also gearing up for her upcoming film ‘Tera Intezar’ where she will be seen sharing a smoking hot chemistry with Arbaaz Khan. The show will go on air in November.