Is there scientific proof that thoughts create reality? 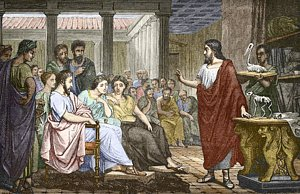 I know what you're thinking. You're thinking that's stupid. Our thoughts don't create reality. If it did, we'd all be rich, we'd be with the perfect partner, and the entire earth would be singing koombaya around campfires. Well, aside from all the negative thought patterns we picked up from our past (to be talked about in another post), I'd like to discuss a few scientific studies on how thoughts create our reality, or our results.

There was one study by Dr. Biasiotto from the University of Chicago. He had basketball players divided into 3 different groups. Group 1 practiced free throws for an hour. Group 2 pictured in their minds (visualized) making free throws. Group 3 did nothing.

After 1 month, the 3 groups were tested. Of course, group 3 did the worst. But what may surprise you is that group 2 did just as well as group 1 without touching a basketball. Similarly, a study was done on monks who meditated on peace in Washington DC. Up till then, crime had steadily been rising. for the previous 5 months. The monks meditated for 2 months on peace, and during that time, crime began to decrease till the end of the study, when crime decreased by almost 25% (23.3% to be exact).

And finally, the opposite can be said to be true. Thinking about negative things can adversely affect you. Take lottery winners as an example. According to the National Endowment for Financial Education, as many as 70 percent of people who win a lottery or get a big windfall actually end up broke in a few years. This is because, although they may really want to win the lottery, they may not be prepared to keep that money. Having that money is a break outside their paradigm.

Think of it this way. All their lives, they were accustomed to living a certain way. Now that they have that money, is it so easy to break free of the thoughts, habits, and emotions that entailed their lives for so long? Not really. The mind seeks what is called homeostasis. When things suddenly change, guess what the mind does? It seeks to go back to the previous days when all that money didn't exist, when they were poorer. The lottery winners get depressed because things are different, they lose interest in their new found money, and squander all their money.

The quest for homeostasis can also be seen in dieting, when a person may lose weight for a brief period of time, but then regains it all afterwards. And then some.

This doesn't mean that people can't change. People can and do change when their thoughts are in alignment. Alignment.

Well, that's all for now. Thanks for reading, and keep a look out for my other articles.

Yeh it's a very fascinating subject! There is pretty compelling research over the years that correlates so much of this. Because we are brought up in a materialistic society then it never get's explored or talked about by the general public. Such a shame as we have so much to learn and be curious about.

Hopefully, now that we have new technologies (internet, social media) we can work together and unite in confirming that our thoughts do shape reality. Normally, big corp shuns this, calling it names like "placebo effect" or worse things like "crazy", but hopefully we can enter a new era of humanity (or revisit an old era of re-enlightenment).

Yep there is fascinating information and studies out there and quite shocking how these studies are just brushed aside.

I think the famous "Double-Slit Experiment" proves that our minds in fact do change the reality we live in (without requiring us to physically intervene). Fantastic post!

And just to add, the observer effect. So by observing with the mind (mental imaging without physically seeing through the eyes), we can affect matter and reality, proving that thoughts are real. Thanks for reading and commenting!

The proof is simple. If you think it.. and you do it (because you thought of it) your reality will change. In fact just thinking something is quantum physics and requires even more complex models that include multiple realities. Abra Kedabra (houdini) which is ancient hebrew means If I think it (or say it) I create it.