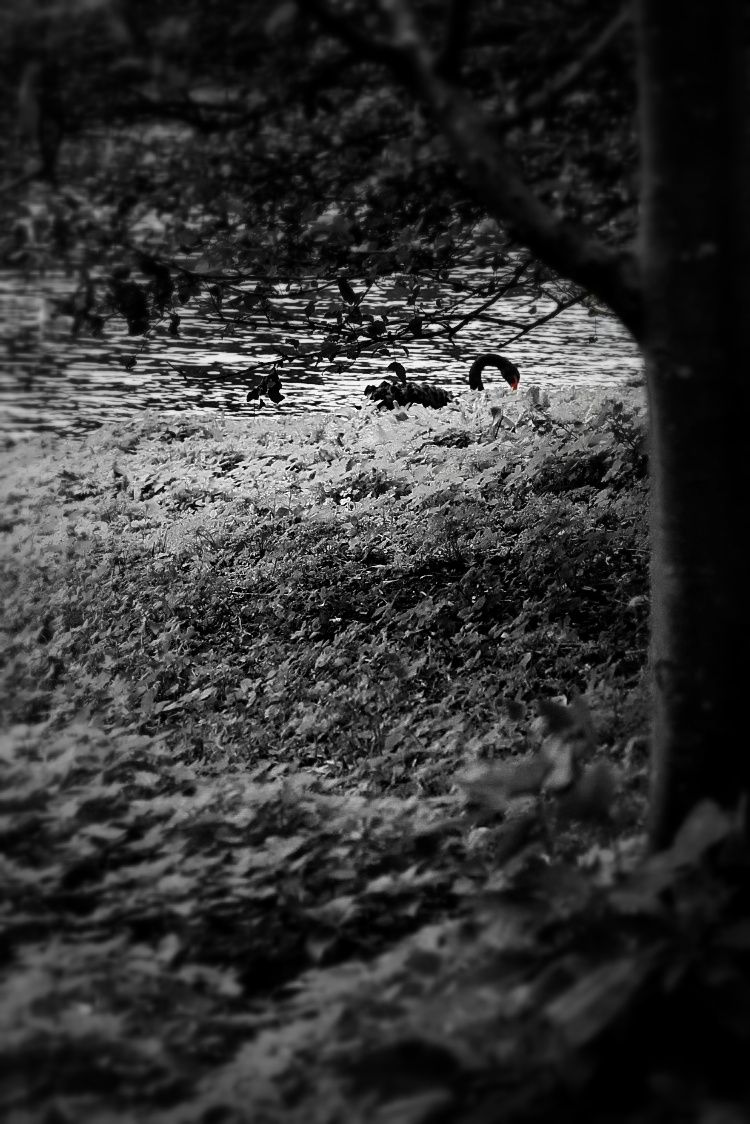 So, as I’ve alluded to, there’s a reason for the huge delay in posting the new rewrite of Disabled. That reason is Asperger’s. The poem has been finished for months now. What has been difficult is finding a way to say something meaningful about autism spectrum disorders. I only “found out” this year, in my late 20s, that I am very likely on the spectrum. Below is my self-evaluated RAADS-R score. While this post is not meant to serve the purpose of a debrief on all the evidence I have for this belief, some of it is offered here nonetheless. So as I was saying, about the delay... I’m also a bit of a perfectionist. Unfortunately, though, this being so new to me means I haven’t had nearly as much time as I’d like to meditate on all the issues. Problem is: I’ll never stop thinking about it.

I have a handful of what could be called obsessions. I, myself, am one of them. No, really. Check out my evernote tags.

The only tags used more often than ‘self’ are ‘ram’ and ‘politcs’. Things tagged ‘self’ are mostly productivity tips, personality test results, self-help regurgitations, secrets to stressful social situations, and a bunch of b.s. affirming my brilliant uniqueness. While I’m definitely embarrassed by some of this stuff, it was this obsession that led me to find the RAADS-R and learning more about autism.

After which, came the deluge of all the thoughts and ‘member-whens that were finally made clearer by the universal solvency of self-diagnosis. A few gems:

[Replace that cute little white girl with a badass little black boy and that eraser with a chair, and you’ve got a pretty accurate representation of how I got down.]

Alright, this list could go on forever. Point is, I’m pretty sure I finally got the answer to that old “what the heck’s wrong with me?” question. Mainly because of natural and seemingly effortless past interactions with me, some may shit in my cereal without seeking to by objecting that either I am or my experiences are in fact “normal”. If they care about having an informed opinion, I suggest such people further educate themselves about asd. Unfortunately, education is not a prerequisite of opinions.

Though that doesn’t mean there isn’t something at least a little fishy about the whole “what’s wrong with me” story. After all, what is normal? And not in like a getting baked in a liberal arts dorm room with a buddy high enough to admit some weird shit to you kinda way.

More like in a philosophy of science kinda way. Like this excerpt from The Stanford Encyclopedia (SEP) entry on mental illness by Christian Perring [emphasis added]:

Those who argue that psychiatry and the rest of medicine are inevitably normative do not infer from this that medicine is always biased; instead, their view is that the nature of psychiatric classification requires that some normative rather than purely scientific assumptions be made about what counts as health and what counts as illness. They generally then suggest that, since medicine and psychiatry have to make such assumptions, they should be as open and honest about it as possible so that debates about certain categories of psychopathology are not based on a misunderstanding of the kind of enterprise involved.

Unfortunately, open and honest discourse about mental illness is not America’s strong suit. And that’s without even getting into what counts as illness, dysfunction, disorder, etc. and the differences between them. After reading NeuroTribes by Steve Silberman, one might, as I did, even get to wondering whether you’re in some way actually functionally superior to the so-called neurotypical. After all, there are some pluses. Shout out to u/Vealophile for starting my most recently lurked across r/Aspergers thread about what’s actually great about being an Aspie.

Okay, so some of this can frankly get into obsessive territory, but what would my poetry be without my obsession with words? This poem, in particular, would likely never be if it weren’t for my growing obsessions with genomics and (squelching) nazism (separately, though we’re still desperately searching for the Nazi gene in a vain attempt to one day eliminate it--through science!). Right, about the poem now, finally.

The rewrite is my take on a choliamb, or limping iamb, a structure I’m not ashamed to admit I totally settled on in part because of the word ‘limping.’ (Get it?... Huh?... Do you?) In addition to structural inspiration, choliambs inspired the narrative voice in the poem. Some relevant info from Wikipedia's page on iambus:

The common element in all iambus is blame, drawing attention to dangerous or unsuitable behaviours. It is addressed to an audience with shared values and customs, which are represented as under threat, as for example a body of citizens or companions.

I spend a lot of time thinking about a future I probably won’t live to see. One with Star Trek style replicators, colonies on other planets, and the merging of man and machine. This led me to imagine a world where scientific advancements in areas such as cybernetics, neurobiology, genetic editing, and computing demolish the notion of ‘typical’ at least with respect to neurology. Advancements in science which, in some cases, will have roots in the straight- up genocide of differently-abled peoples. Mostly children.

And fifteen, ten, even five years ago if you had asked me whether I thought nazism would see a proud resurgence in America I would have brashly scoffed with a "hellllll no!" Nevertheless, it’s back, masquerading as nationalism. And unfortunately, science and politics are not without some mutual dependencies. Perring adds that theorists like Sadler and Fulford think we as a society ought to clarify our position on medical and psychiatric issues democratically, through public debate.

I think this is a wonderful idea but worry that many Americans do not have the scientific literacy necessary for it to prove productive. Take, for instance, this note on the Diagnostic and Statistical Manual of Mental Disorders (DSM) from Dominic Murphy’s SEP entry on psychiatry [emphasis added]:

The DSM classification has been designed (DSM-IV-TR,xxiii) to improve communication between psychiatrists and across disciplines and provide a basis for education. But it is not advertised as the jumping-off point for a mature system of causally organised classification and practice. This reflects a minimal interpretation of the medical model; it can guide empirical research but not uncover causal structure.

DSM leaves itself open to the charge that a classification which groups together observable phenomena can sort entities into heterogeneous classes, with underlying diversity masked by surface similarities. We already know from other areas of medicine that what looks like the same phenomenon—a cough, say, or a sore throat, or chest pain—can reflect different biological processes and hence may really signify different conditions. A taxonomy that relies content with surface features risks lumping different conditions together and keeping related ones apart.

To me, this suggests that the way mental health is focused on today in the media is misguided--with efforts to pin the cause of autism on whatever, deference to mental illness on all matters mass shooting, surprisingly little about climbing suicide rates, etc. It’s no wonder public debates about mental health rarely result in effective policy changes when we’re focusing on the semantics of jargon and speculations of origins.

Boy, it’d sure be a lot easier if we had a system in place that looked after everyone’s mental health. You know, some kinda mandate that could ensure our fellow citizens access to a basic level of care. I mean, I know we had a sort of lite version for a while there that was better than nothing. (Leave it to a black man to do a half-assed job amirite? Which is why we have to work so hard to undo his shabby work. /s) As a Stateside Canuck, it saddens me that a healthier future is currently nothing more than an American daydream.

Oh, and by the way, you damn right race has something to do with it.

So let me just cut to the chase. The whole reason I’m rewriting these poems is for me but the only reason I’m promoting the original The Colour Grey is to do a little good for my community. As I’ve mentioned before, 80% of the profits from sold copies will be donated the Marcus Autism Center to help fund research into and services for African-American families affected by autism spectrum disorders.

If you can, please consider purchasing a copy from one of the links below. Then you can burn the book or your tablet (if you got the ebook) for all I care (in fact, that might be preferable to you reading it or risking someone accidentally reading it by you leaving it lying around). Why not just send it to someone who crossed you to utterly baffle them about where you stand? Or send it straight to its eventual thrift store or free tiny library grave. Either way, I’d be greatly thankful. Now, without further delay, here’s the short poem you definitely didn’t just read close to two thousand words to get to:

unmeshed from flesh, effluence spent, once bent broken
exerting tensions--no exemptions; none, zero
we each except ourselves from Mother’s wet matter

when states of being human people get sanctioned
by slow ontologies of quick estates. Plunk-ing
in pools of foam and floating bones of lore’s nomos

we shatter. Marrow mausolea left smiling
But bitter brittle bits are cached there like Gross Brains
For us, no + or - matters: just data

We vulgar hydra rupture, chew on gum, spit off-
al out and find our slick saliva sweet like fruits
of virtue. Place in maze’s queue reserved--new net

genetic fabric lagniappe upgrade with purchase
We free can fabricate the race anew. Sure it’s true a few
cannot upscend, but ought we not because we are so able?

Photo: lessthan3aire
The Colour Grey available here as ePub, in paperback, or from Amazon here as an ebook.

@run-the-bits payed 0.05 SBD to @minnowbooster to buy a stealth upvote.