A modern tale of the ancient boiler and the new magician

Spoiler: The patient lived. I am now a magician.

It started about a month ago. The house I live in was built in the 1920's. It's an amazingly solid, simple, unmodified place with a heating system to match.
We had a cold January (Think -26C). I'd determined to replace the old mercury switch thermostat with a shiny new Ecobee (hint: don't get one).

It was no easy task to hook up the robust 90+ year old water-heat boilers with a modern thermostat. So I hired a magician, I mean electrician. When he'd finished installing it I thought "Great! Now I can start saving money". But in the first week the house seemed always too warm, or to warm too soon in the morning.

I decided to check the boiler itself. The water level seemed a little low, so I added some, until the pressure was were I'd been taught to maintain it.

Over the next few days the house seemed about the same, slightly warmer than I wanted all the time. When I went into the basement again - disaster!

The floor was covered in water. It seemed like far more than I could have added earlier in the week. Immediately running to the boiler I looked for signs of leaking. Fortunately there were none, but the water pressure was twice as high as I'd been taught was safe, and the emergency blow-off pipe was dripping.

This was a big problem.

The high that day was above freezing but the Upper Midwest can get cold, fast. I called a heater person out, he triggered the emergency valve a couple times to bleed off pressure; and looked the system over with green eyes. He said my pressure overflow tank, hung between the rafters of the basement, was water-logged. I looked up and saw an old tank in reasonable condition with a spigot on it. "What does it do?" I asked. "It serves as a buffer to take on water so the pressure doesn't get too high. When it gets water logged like that; it's useless.".

"Well, we have a modern overflow tank. They're much smaller. We'll order one and install it right here. We can just abandon the other one where it is. It's not in the way." -
This seemed like an expensive option; and the rather deliberately installed spigot suggested the color of his eyes may have been less about his heritage and more about his disposition.

"Can we try emptying the tank? Would that help?"

"We could do that, but the pressure would just creep up again as soon as the boiler fired. Once those tanks get water logged they're ruined."

Huh. A tank is a tank I thought. "Why's that? Is there a mechanism in it?"

"Yup. Magic and stuff. If you had a super advanced magician and a lot of money to spend on him maybe you could get it working again. Better to just get the modern one."

"About two weeks. We can call you to setup a time."

"It's 10C outside. Spring has sprung. You shouldn't have any issues.".

"Ok. Call me." I wasn't sure if I was wearing my misgivings on my sleeve or not.

His cavalier attitude toward Upper Midwest weather was confirmed shortly after he left. Checking the forecast, in just a few days the highs would drop down to 3C again, with even colder weather to come. That night the blow off valve popped again. With brackish water once again gracing the basement floor, I decided to find a magician. And I turned the heat off.

It didn't take long. Within 48 hours I had a scruffy well meaning man with a pipe wrench and an asbestos sniffing habit in my basement remarking how impressive my boiler was, and asuring me things were broken and needed to be fixed... until he tested them and found them to be just fine. He drained the water tank, listened for the gurgle of it sucking air through the spigot, repressurized the system (To 20psi. A much higher value than I'd been told was ok years ago, but with such confidence) and finally pronounced that I was "good to go" and that "the other person was a shyster". I was happy. The first very cold night and I could turn the heat on (low, but on).

All was well for two days.

On the third day I went down to do laundry, but saw instead the blowoff valve had once again saved the heating system, but made the basement a damp, less pleasant place.

My shyster had shystered me.

My magician had failed me.

Time to fix it myself.

Many google searches later I found some interesting information. The tanks WERE hollow. The magician HAD done the "right" thing. Why had it failed so? It must have been the 20psi. I decided to try 15psi. I carefully replicated the magician's proceedure. Three five gallon buckets of water out of the tank. Repressurize just so. Nothing exploded. Nothing imploded. I tested the overflow tank. It seemed rather heavy; but a 15 gallon tank is going to be heavy even if only 1/2 filled.

I decided to try 13lbs. The pressure I'd previously been told was the ideal. The tank sill seemed heavy.

This was getting harder. I googled a bit more and found that about 8psi was the minimum needed at cold temp to keep water in my radiators. But I had a clever idea. What if the tank needed to be able to push back a little harder? With the exhaust valve open and the tank empty, I blew into it as much and as hard as I could before shutting the valve and locking in that little extra bit of pressure. Did I mention I used to play trumpet?

The next day... a dry basement!

The day after... water in the basement.

It had clearly helped, but not well enough. I decided to try 10psi.

And that brings me to today. My most complex solution thus-far, and one that I've tested a few times already. It requires working four valves in multiple sequences, a bicycle pump (because blowing into that tank was gross) three different extra fittings (because bike pump). And patience.

The process is very similar to the one you can find online for draining a boiler overflow tank; but in this case you drain the tank, pressurise it to just belowyour desired cold pressure for the water system (no more!) and then very gently, like an ancient submariner raising his thousand year old nautilus from the deep, manage the release of pressure from the main system into the overflow tank, and bringing in new fresh water from the city system without ever letting the overall pressure of the system get down to the base pressure of your overflow tank (Think bubblbes in blood friends. Not a thing you want.)

With all that out of the way, and having done a few cold pressure tests to make sure things are stable this submariner magician is sitting comfortably on his couch, blogging to you. 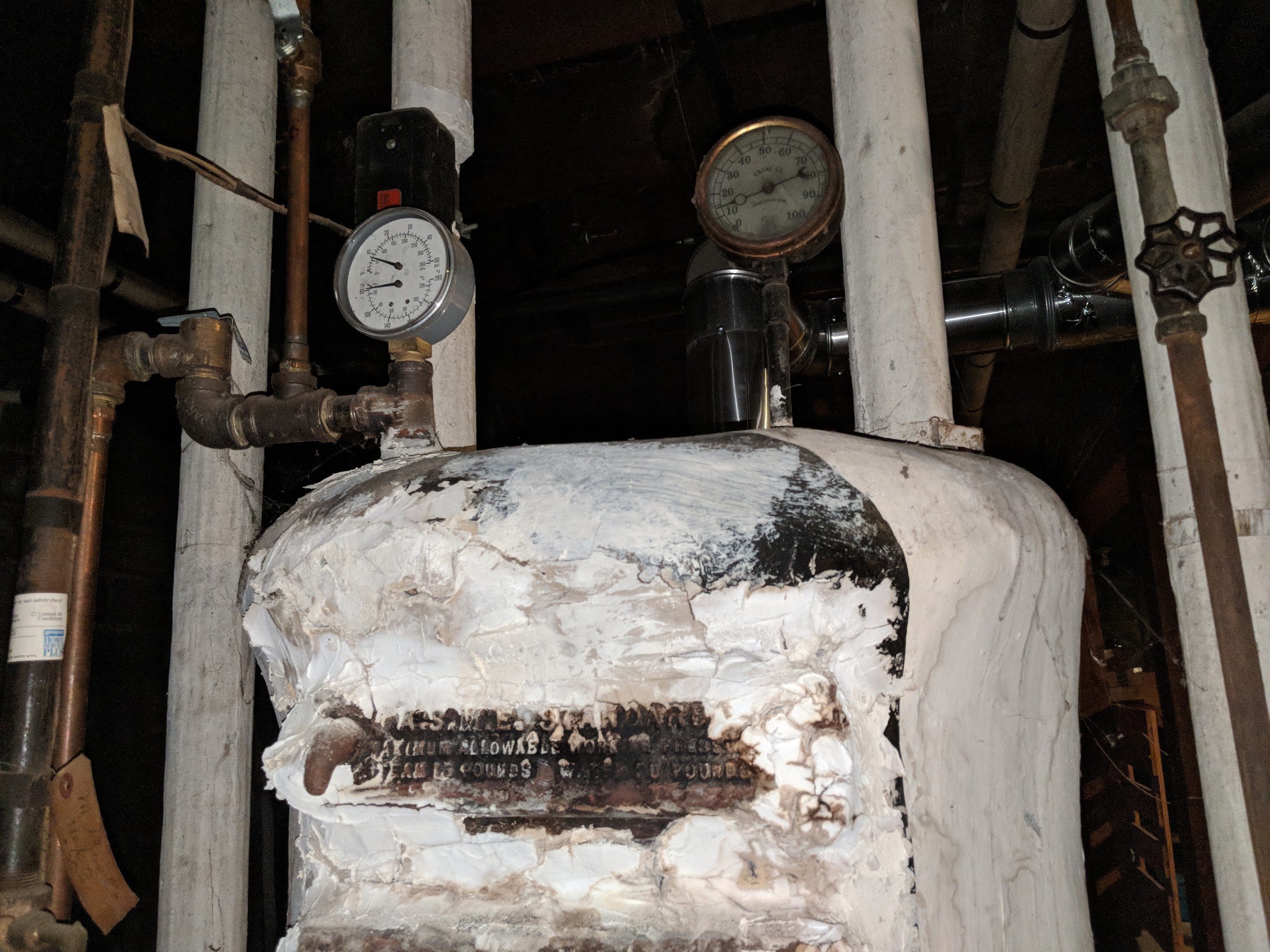 Abra-ca-dabra zippity zap, he fixed the boiler, just like that!