I wrote this several years ago for a compilation called Fem Fangs. Not a romance, like my normal vampire fare, it was fun to write something a little different. Hope you enjoy. 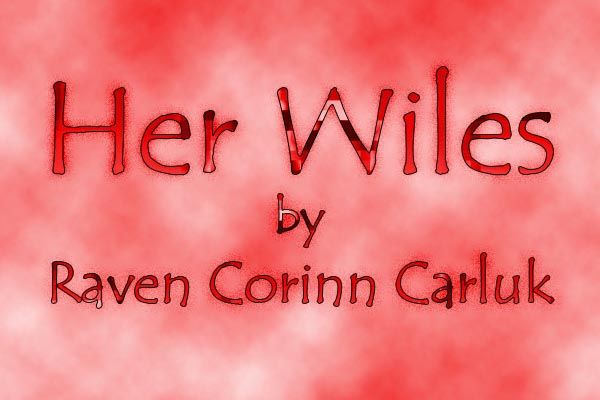 Miranda writhed and touched, moving amongst her fellow dancers to the driving base line. The club was at its peak, full to capacity, and people were in a frenzy. Couples were starting to form, even some trios, and Miranda's hunger was a lashing need.

The vampire needed to find someone, and soon.

There was a go-go dancer Miranda'd had before, but the skinny brunette didn't appeal tonight. Nor did the gaggle of college students who'd taken over several tables. There were a couple middle aged men on the prowl, but they looked too desperate. She wanted something she couldn't define, and no one had caught her eye yet.

Until she spotted the stunning blond woman in the middle of the dance floor, surrounded by men and women alike. Strong, tall, dressed all in leather, the blond knew she was the center of attention. Every move was meant to entice. Every curve was highlighted, every strand of hair a web to catch suitors in.

Miranda was enthralled. The vixen needed to be seduced, to be a font of life for the vampire, to have a moment of passion so deep neither would forget. Hunger condensing into a tight ball, the she-vampire began her stalk.

Strong hands slid across Miranda's waist, down her hips. Rough, possessive, they pulled her back against a tall man. He smelled musky and masculine, and drew her hunger back to the surface. She groaned, pressing back, offering herself to this stranger. The blond would have to wait.

They moved as one, letting the music guide them. Sensuality was all that mattered. Miranda reached up to touch his neck, rocking her hips against his, arching her back. His hands roved, working from her hips to her belly, and finally to her breasts. When he cupped them, she groaned again, fangs aching with need.

"Let's get out of here," he shouted as the music changed tempo. She nodded, allowing herself to be lead off the dance floor. He held her wrist tightly, keeping her close. Miranda slipped an arm around his waist, pressing her breasts against his back. This one would do just fine.

They went only as far as the hall to the bathrooms. As soon as he found an empty nook, he pulled her into his arms, kissing her fiercely. Miranda kissed him back, running her hands through his hair, across his shoulders, pulling him closer.

She needed him, needed him now. Days since her last feed, and the itch was maddening. His blood pulsed just below the surface, filled with his scent and flavors, his life and strength. All of it was there for her taking. Miranda opened her mouth over his neck.

And stiffened as something hard pressed against her side.

"Make it easy on yourself," he said, lips against her ear. "Don't cause a scene. Just slip out to the alley.” He nudged, directing her toward the exit.

Hunger was replaced by panic. Blood ran cold, and her skin prickled. Miranda hadn't faced a hunter in decades. "What are you doing?” Her voice cracked, and she stumbled out the door into the rank alley.

He kept her wrist, kept her close with a grip of steel. "Are you really that stupid?” The dingy light revealed the slender stake in his other hand. "Weren't you taught anything?"

Every nerve cringed as he slammed her against a wall. She'd been so careful, not killing anyone, feeding on only people who wanted it. No mess, no fuss, nothing to attract a hunter.

His eyes gleamed with fervor. He knew what she was, no mistake. Miranda continued to stare at him, lower lip trembling as she worked out a plan. "I don't deserve to die."

He sneered, looming over her, pressing the stake to the hollow of her throat. "They all say that.” He pressed harder, eyes narrowing. Pheromones filled the air; he was taking pleasure in this.

She cried, tears falling hard and fast. Miranda squirmed and fidgeted, biting her lip. How could she escape from a sadist? She had no powers, no super speed or mind control. All she had was feminine wiles. "Please?"

His only response was to laugh. Miranda crumpled, kneeling before the hunter, tugging against his hand even as he kept the stake pressed against her. "I don't want to die. I want to live. I never wanted to be like this, never asked for this. I don't kill, and I don't hunt them. They're so happy when I finish."

She continued begging, sobbing. Reaching up with her free hands, she grabbed his shirt, wringing it, tugging on it. Miranda could barely see him through her tears, but his grip relaxed, the stake shifting away from her neck.

"You've never killed?” His voice was gruff, but the sadistic glee was gone.

Miranda drew a shuddering breath, blinking rapidly to clear her eyes. The hunter was merely watching her, stake at his side. He was studying her, entranced by her behavior. "Never," she whimpered.

He tugged on her wrist, pulling her to her feet. "How old are you?"

She wiped her cheeks, unable to meet his gaze. "Seventy something."

Strong fingers traced her chin, tipping her head back. "No. When you were changed."

"Why so young?” He was frowning, fingers still stroking her face. "You poor thing."

Rubbing her cheek against his hand, Miranda kept him locked in her eyes. "It's been so bad. All the blood, all the people. But I like living, and I just want to exist.” She touched the stake, and he didn't stop her. "I'm damned to this torment. I don't want to go to Hell."

He stroked her hair, unable to look away. The stake came free with little resistance. "I can free you. You can be released.” His voice was distant, almost a whisper.

Miranda smiled. Men couldn't resist a crying woman. "But I don't want to be freed," she said, driving the stake into his chest. He gurgled, eyes wide, blood staining his lips. She laughed, and pulled his neck to her mouth. As the hunter died, she fed, filling up on his life.

There was no need for powers, for speed, or to meld with shadows, or to fly, or to become a bat. A mere smile, or a wink, or any hint of femininity will control a man. The allure of vampire only enhanced those feminine wiles.

Someone cried out, breaking Miranda from her feed. She turned, meeting the startled gaze of the blond from the dance floor. The exit door closed, leaving the human woman trapped with her.

Miranda let the hunter fall, wiping at her mouth. The newcomer trembled, face draining, mouth slack. "Please don't kill me.” Reaching for Miranda, she began crying, collapsing to her knees.

Pity stirred the vampire's heart. This woman had done nothing wrong, just stumbled upon a bad scene. Killing a hunter in self defense was one thing; exposing herself to mortals in her favorite club was something else. The blond didn't need these memories, needn't fear Miranda, needn’t spread ugly rumors, or summon more hunters.

Hands spread wide, she approached the blond. "I'm not going to kill you.” When the other woman didn't run, Miranda took another step. "He was a bad man, trying to hurt me. I have no reason to hurt you."

The blond tried to stop crying. Her make up was a mess, her nose running, and she wrung her hands repeatedly. Miranda wanted to ease her mind, to help still the fear.

Kneeling beside the blond, Miranda embraced her. "I'm sorry I scared you.” The blond's perfume was intoxicating, and reawoke Miranda's hunger. A quick moment of ecstasy might do them both some good.

The mortal woman relaxed, letting Miranda comfort her. The vampire stroked her hair, kissing the crown of her head, rocking them gently. "It's going to be all right," Miranda whispered, moving to the woman's neck.

"Of course it will be.” The blond chuckled, and pain lanced through Miranda's side. Gasping, disbelieving, the vampire collapsed. "And my brother wasn't a bad man.” Her mocking laughter followed Miranda into darkness.