Welcome to my The Sprawl Campaign-Diary. I will re-tell each mission my group finishes. I'm the GM of the group.
Last time I talked about my first impressions of The Sprawl. Today you get to see the first mission.

The not so distant future. Neo-Shanghai. 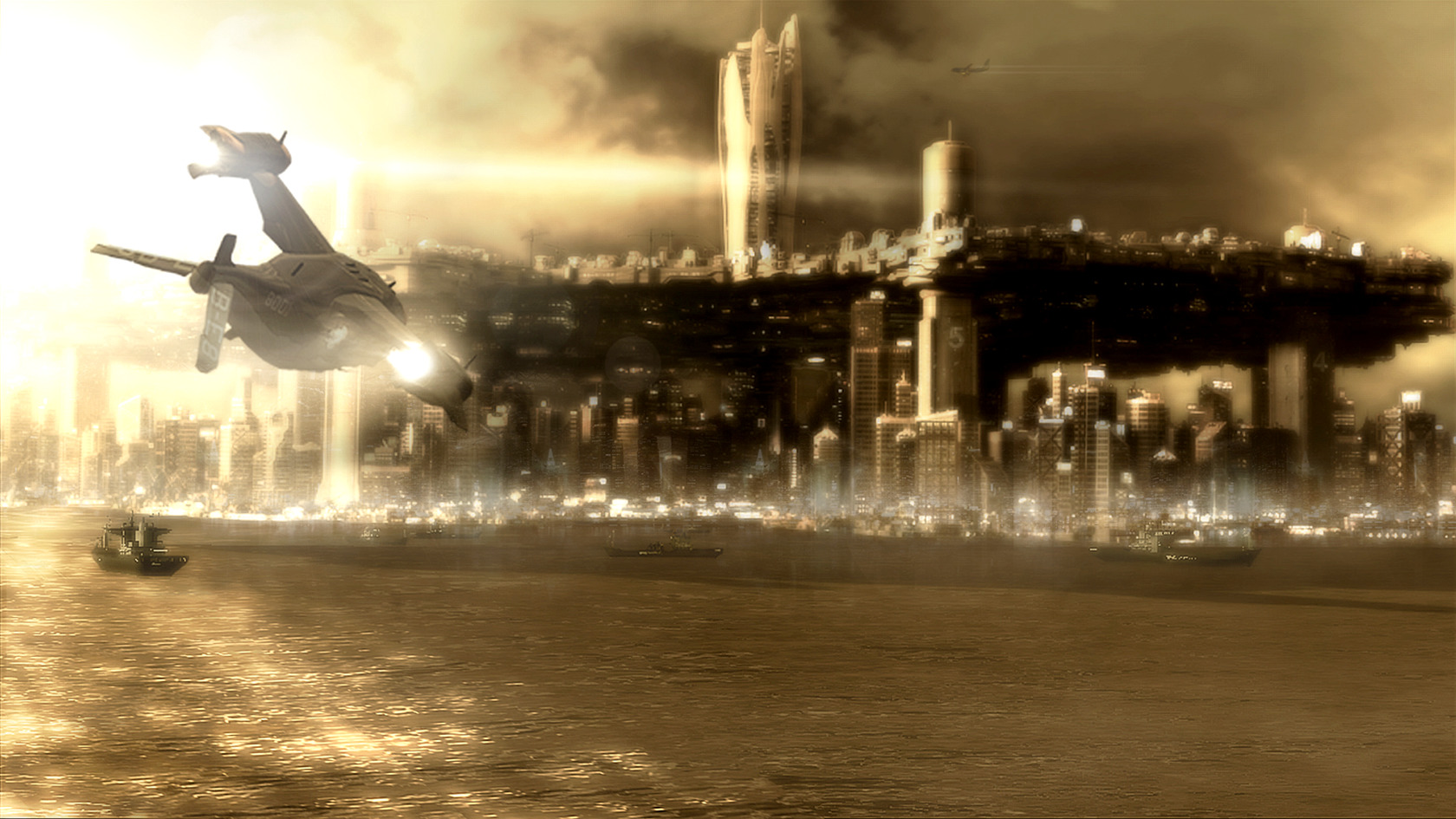 Hengsha from the Deus Ex-Series – obviously an inpiration.

The lower part of Neo-Shanghai was still under Chinese rule. An arbitrary government punishing you, as it saw fit. If there was no law to punish you, they would create one to punish you.
200 meters up however it was a completely different city. International laws applied here. Titan Pacifications was the police (though they just worked for whomever paid them), Mega-Corporations decided the laws. If you had the money, you could life a good life here. The protagonists are four operators, each in a different place, doing their own thing:

We see an Asian looking, young woman, sitting in front of a computer in a dimly lit room.
Her right arm was an obvious cybernetic-arm, though not as smooth looking like normal cybernetic-arms.
We look on the screen: She was chatting, with a group called "Pulse". It was chaotic.
Someone entered her room. From the door they said in a serious tone: "Hey Laughing Lady, you should take at look this."
Laughing Lady sighed, stood up, and left the room.

In a different place we see a young man, extracting parts from under a car in a hurried fashion. His face was mostly covered, and he was wearing a leather jacket, improving his unfit appearance.
In the distance we hear steps, and two people talking. Roadkill quietly exclaimed "Shit, already?!" and scuttled under the car, hiding from the people.
The two talking people did not notice him, for now.

Somewhere else we see a muscular man, sitting at a bar in lower Neo-Shanghai. Its name was in English: "Drink here table".
While drinking Paladin was watching a news report on his phone about a fallout between Mieux Vivre and a small group of activists called The Protectors of Gaia. The activists were portrayed as anti-social, and dangerous.
Paladin quietly muttered "Bullshit!", and ordered a beer in broken Chinese.

In front of a junk-yard, we see a small south Asian woman, discussing with an older Chinese man wearing dirty clothes. She wanted to buy some old hard-drives for cheap storage, but the price was not to her liking. While talking she got a call from an unknown number on one of her burner phones. They'll call later, she thought, and continued discussing.

Half an hour later, the woman now sits in a cafe. The burner phone got another call. She picked up, a high-pitched female voice told her in a calm manor:

This is Jinx? I have a mission for you and your team. Meet me at the transferred place tomorrow, at 2 PM.

And immediately hung up again. Later Jinx wrote Laughing Lady a text message, including the time and place of the meet.

Techno music played in the background through a broken sound system. We only feel the base-line, all melody is drowned in the chatter of the place.
The place looked very nice through AR-Projectors, every sense other than vision screamed disgusting, however. It smelled like old-beer mixed with barf, and every time you raised your foot to take another step, you feel it sticking to the ground.

A beautiful blonde woman with long, flowing hair, wearing an executive-suit, and an eerily beautiful face walked towards Jinx, and Laughing Lady. Her pretty face tried to hide her disgust of this place.

They went to a table surrounded by two small benches. Alice sat down, immediately regretting her decision, as her flashed with disgust.
Jinx was smarter, she took out a small towel, put it over her side of the bench, and sat down on the towel.
Laughing Lady preferred to stand.

I want you to get something from RoboTech's Research & Development Building number 4 for me. There is a prototype called KC16.
Sometime this month it will be transported by Haussmann Transports, to RoboTech R&D 1. You might be able to use that info. If you have the KC16, call this number, and bring it to this crossroad in lower Neo-Shanghai. 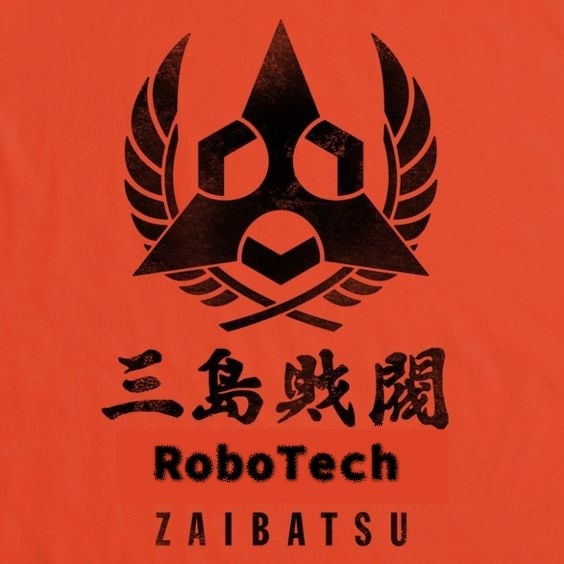 Payment and other minor things were negotiated, then Alice quickly left, another disgusted look on her face.
Jinx also stood up, intending to leave. Laughing Lady added a snarky comment, grinning:
"Hey, you forgot your towel", which was now properly stuck to the bench.
Jinx rolled her eyes, and left, Laughing Lady quickly followed.

Laughing Lady started investigation, by asking her group, The Pulse, for anyone having heard of RoboTech KC16.
Not shortly after, she got an answer from a name on the screen. Shadow.
Shadow told her the KC in KC16 stood for KitChen – it was a kitchen helping robot. They also included a very low resolution image of it: An androgynous looking android, limply sitting on a chair. Instead of a right hand it had some kind of machinery, the left hand was completely missing.

Shadow also told Laughing Lady some extra information: In RoboTech's R&D 4 there was a captured person called Charlotte Nakamura – when Paladin heard this, he shouted out: "I know this person! They vanished a week ago! They're in the Protectors of Gaia! We have to rescue her!". The group considered it – but the mission had to be done first.

The group no knew what the KC16 was, and what it looked like. Now they needed a plan, on how to actually get it.

Since the client already told the party about the prototype being transported by Haussmann Transports – a very small, independent transport company – later this month, this was an obvious first choice to investigate.

Jinx decided to dress-up, and play

I met one of your drivers in a club, they didn't tell me their name, though.
They said they were going to do a transport for RoboTech this month, can you tell me who they are?

to her advantage, the secretary working at Haussmann Transports was an elder lady, fondly remembering her time, as a young lady. She happily spilled corporate secrets:
The driver was called Marcus Hamilton. The secretary even gave Jinx his phone number.

Laughing Lady also knew what to do next. She was an expert in talking to people: Tail him, put up a facade to get close to him, and then convince him of her vision to destroy RoboTech.
He believed her, and told Laughing Lady when exactly the transport would take place.
He also believed in sabotaging the transport by parking the vehicle mid-transport, and giving it to the group. Security did not deal with itself though …

To combat security (one car with 2 armed guards) following the transport, Jinx decided to call her contact Ciarán, a traffic technician, to reroute the transport into a car park, with less surveillance, than the streets. Ciarán was being watched however, Jinx had to pay a big favor to even the playing field between them.

The transport was rerouted into the car park, and paladin was quick retiring both guards, in charge of, while Marcus nervously ran away.

Roadkill's "King Oscar" transport VW Bus arrived quickly, to pick up the KC16. In the back of the transport, there was another android though. A silhouette of a humanoid shape, devoid of any gender, or other features.
Paladin, Roadkill and Laughing Lady moved both the KC16 and the silhouette into Roadkill's bus, and quickly scooted of. Quick enough to avoid more security.

While driving, they called the client, to tell her, that they had the KC16, and were delivering it now.

Roadkill drove them through the spiraling towers connecting upper and lower Neo-Shanghai.

Before they arrived at the crossroad, Roadkill already noticed trouble: He knew the driver they had to pass the KC16 to: George Chrome, a member of the Men of the Machine.
The Men of the Machine hunted Roadkill, because he stole some valuable Cyberware from them.

Roadkill quickly gestured to Paladin, to take the driver seat, so Roadkill could hide in the footspace, driving the car with his neural interface.
Jinx talked to George, telling him, they got the KC16, but George knew Roadkill's VW bus.
While walking to the back of it, to pick up the KC16 he stopped at the driver side, knocking on the window, gesturing for Paladin to lower the window.
Jinx was not happy with George wasting time doing smalltalk with Paladin, she angrily told him to skip the chat, because time was short. But George wanted his time, and pulled his pistol on Jinx, threatening her, "just a minute" – when he looked back to talk to Paladin he was surprised to see Paladin, now pointing a gun at him.

George grinned and asked Paladin, still pointing his gun at Jinx, "Where'd you get that car?". Roadkill gestured something, but Paladin did not understand entirely: "Well, I needed a car, so I stole it from someone".
"Heh …", George said, as he lowered his gun pointing on Jinx, "Well, that wasn't so difficult, was it!", and continued to the back of the bus, to pick up the KC16.

When George picked up the KC16 Jinx saw the silhouette android for the first time, and she identified a problem:
It was a raw android, used for prototyping other androids. These usually don't leave Japanese RoboTech research facilites. And all of them had a tracking device built in.

To disable this tracking device Laughing Lady called her hacker contact, AK vampire, whether he could disable the tracking remotely. Not possible, was the answer, meet me at this place. Drive unpredictably.
They went to the agreed place, and a boney figure clad in a big black cloak waited for them. A pale face, hardly visible under the cloak, smiled at Laughing Lady: "Nice to meet you".
But there was no time to waste. AK vampire jumped into the bus, and quickly plugged his cyberdeck into the android, and typed away, text flying at an insane speed on the screen. After a minute he was done, the tracking chip fried.

The group got payed, not as much as orginally discussed, but they went out with more than they went in. And they now had a valuable android by RoboTech.

Back at home, Roadkill decided to write George Chrome a message: "Nice ride, ain't it?".

This is my point of view, as the GM, written into a literary text.
My players reading this will probably think different about some things that happened. My point of view isn't the one and only point of view.
Additionally, for a The Sprawl game, to be written into a continuous text, some details have to be changed. Things like [Intel] are not defined, when the characters get them. But later, when made into concrete knowledge, they may be game-changing, reverting previous choices.

In this section I will talk a bit about my GMing experiences with The Sprawl.

I had some difficulties running the first session, as mentioned in my first impressions. The problem to me was, that The Sprawl seems like it wants the GM to prepare a fair bit. But that doesn't work out very well, when not trying to railroad your players.

Having a continuing narrative, with player input, rather than the GM creating all the missions, whether the players like them or not, also seemed to be a problem. I adressed it, by giving the players a choice between three one-sentence missions to pick from, as the next mission. They decided to "Steal a vehicle from the Men of the Machine" as their next mission.
Preparation for that were three things (rather than way too much, as I did for my first mission):

Feel free to review the grammar, and writing style for this story. I'm german; English classes in school are several years in the past now.