Hi friends, I hope you're fine? Did you hear that yesterday was the Martin Luther King Day?

It's a well-known name but again, as for Hemingway, I finally realize that I do not really know this man's story. 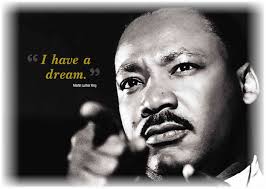 Martin Luther King Jr. was born in Atlanta on January 15, 1929 and died on April 4, 1968 in Memphis. He was an African-American Baptist minister, a non-violent activist for black civil rights in the United States, for peace and against poverty.

He organized and directed actions such as the Montgomery bus boycott to defend the right to vote, desegregation and employment of ethnic minorities. He made a famous speech on August 28, 1963 in front of the Lincoln Memorial in Washington during the March for Jobs and Freedom: "I have a dream".

He was supported by John F. Kennedy in the fight against racial segregation in the United States; most of these rights will be promoted by the Civil Rights Act and the Voting Rights Act under the presidency of Lyndon B. Johnson.

Martin Luther King becomes the youngest Nobel Peace Prize laureate in 1964 for his non-violent struggle against racial segregation and peace. He then began a campaign against the Vietnam War and Poverty, which ended in 1968 with his assassination officially attributed to James Earl Ray, whose guilt and involvement in a plot are still debated. James Earl Ray is an American criminal, sentenced to life for murdering the Nobel Peace Prize laureate Martin Luther King on April 4, 1968 in Memphis, Tennessee.

He is posthumously awarded the Presidential Medal of Freedom by Jimmy Carter in 1977, the United Nations Human Rights Prize in 1978, the Congressional Gold Medal in 2004, and is considered one of the most of the greatest American speakers. Since 1986, the Martin Luther King Day is a holiday in the United States.

In the Birmingham Prison Letter written on April 16, 1963, while arrested for a non-violent protest, Martin Luther King responds to eight white Alabama priests who wrote a letter called A Call four days earlier. to the unit. If they admitted the existence of social injustices, they expressed the belief that the battle against racial segregation should take place in the courts and not in the street.

Martin Luther responded that without direct and powerful actions like those he was undertaking, civil rights would never be achieved.

He writes, "wait has almost always meant never," and he asserts that civil disobedience is not only justified against an unjust law, but also that "everyone has the moral responsibility to disobey unjust laws."

The letter includes the famous quote "An injustice wherever it is is a threat to justice everywhere" but also the words of Thurgood Marshall he repeats: "A justice too long delayed is a denied justice."

Until the end of his life, Martin Luther King remains opposed to the radicalization and violence advocated by Black Power and emphasizes that "riots do not settle anything" and considers this means as ineffective even beyond the opposite nature riots to his doctrine of non-violence, morality and faith.

For Martin Luther, non-violence is not only right but indispensable, because just as the cause of origin is, violence means failure and the cycle of revenge.

He says that the ultimate weakness of violence is that it is a downward spiral, engendering the very thing it seeks to destroy. Instead of weakening the evil, she multiplies it. By using violence, you can kill the liar, but you can not kill the lie, nor restore the truth. By using violence, you can murder the hater, but you can not kill hatred. In fact, violence simply makes hate grow.

In 1976, the unions helped in the election of Jimmy Carter, who supports the bill. But after this support, the influence of the unions in the campaign for King holiday decreases, and the King Center seeks support from the business community and the general public.

The success of this strategy grew when Stevie Wonder released his single Happy Birthday in 1980 to popularize the campaign and participated in the Rally for Peace press conference in 1981. Six million signatures were collected in a petition to Congress for he votes the law.

President Ronald Reagan opposes this holiday, bowing only after Congress voted King Day Bill by an overwhelming majority, preventing any presidential veto (338 votes against 90 in the House of Representatives and 78 against 22 in the Senate).

In the White House Rose Garden on November 2, 1983, Ronald Reagan signed the law creating a federal holiday to honor Martin Luther King. It is observed for the first time on January 20, 1986.

That day, a concert is given at the Opera House in Washington DC to celebrate this premiere, bringing together the two artists-symbols that are Bob Dylan, who had contributed to the March on Washington for Jobs and Freedom organized by Martin Luther King on August 28, 1963, and Stevie Wonder, the first singing among others the Happy Birthday of the second.

In 2010, President Barack Obama delivers a speech to Americans the day before Martin Luther King Day.

really a true legend was Martin Luther King,he always fighted for his people and believe in non-violence and peace and I also want to tell about Mahatma gandhi one of the great legend from India.He also believe in non-violence and peace.I am Indian and respect all those people all over the world who fighted for their rights.Thanks to share with us very nicely you have presented the story.thank you @lndesta120282 upvoted and resteemed.I hope you will reply.

Martin Luther King Jr is the greatest civil rights acticist America has ever produced. His action as a freedom fighter led to the liberation of Black Americans from the shacles of White America Imperilists. So, congrats for the celebration of Martin Luther King Jr's Day. I upvote you.

This is most cool post I have reading
Thank you

I heard his speech. It was very touchy. Violence is not a solution.

We need more people in the world like Dr. Martin Luther King who can stand for the right of other and fight for it no matter what it cost.

Beautifull story !!!thanks for shareing @indesta120282

Great story, thanks for sharing @indesta120282
Please Check my post, may useful.
https://steemit.com/indonesia/@biruplastik/10-fact-about-guava

Great story, read to love it

That is the best post in Steemit... Now I vote for you...nice? Voteback😋

Thanks for an informative post on this legend of a man. Martin Luther King, Jr. was one of the top speakers of all time apart from being a top notch civil rights activist too.

"I have a dream" - What a speech!
But we refuse to believe that the bank of justice is bankrupt. We refuse to believe that there are insufficient funds in the great vaults of opportunity of this nation....
I have a dream that my four little children will one day live in a nation where they will not be judged by the color of their skin but by the content of their character....

And his last speech just before he got shot:
Like anybody, I would like to live a long life. Longevity has its place. But I'm not concerned about that now. I just want to do God's will.....
And so I'm happy, tonight.
I'm not worried about anything.
I'm not fearing any man.
Mine eyes have seen the glory of the coming of the Lord.

"Faith is taking the first step even when you don't see the whole staircase." - Trully one of the brightest minds in his generation, right?

Martin Luther King was a fighter for racial equality, without his struggle in the past at this time we would not know if he would even see the same way people of color or different cultures are seen, he is a pioneer in that field because of the equal rights of each person.

He was such a visionary and had a dream. I am looking for my dream.

Those men r great souls. Birth as a human is an opportunity to us by The Almighty to prove ourselves but many fail to do so. But those r great.

Martin Luther . Oh man, Many of his words are indeed the reason some people act the way they act .
Now , when we look back in the days , we must appreciate the one who once was a hero and did good for the coming generation.

Congratulations @lndesta120282, this post is the forth most rewarded post (based on pending payouts) in the last 12 hours written by a Superuser account holder (accounts that hold between 1 and 10 Mega Vests). The total number of posts by Superuser account holders during this period was 1631 and the total pending payments to posts in this category was $19011.20. To see the full list of highest paid posts across all accounts categories, click here.

Congratulations, your post received one of the top 10 most powerful upvotes in the last 12 hours. You received an upvote from @glitterfart valued at 228.53 SBD, based on the pending payout at the time the data was extracted.

He was a great man for us, he used to think about everyone, he worked for peace of all, he also believed in nonchalance and peace. He has always fought for peace, thank you very much for the beautiful post,