The Sarcophagus of Rapolla is a marble monument dating back to the second half of the 2nd century AD, preserved today in the Museo Nazionale del Melfese in Melfi.

It was discovered in 1856, in the locality of Albero in Piano in Rapolla, along the route of the ancient Via Appia and is considered among the best examples of funeral art of the masters of Asia Minor.

The marble chest reproduces a temple that has the door at the center of one of the smaller sides; a series of arched niches, flattened platforms and tympanums, alternating, contain statues of divinities and classical heroes; the upper part presents, in the crown, a frieze with tritons and sea monsters. On the lid, sculpted in the shape of a bed, lies the statue of a young deceased depicting, according to some, Emilia Scaura.

Emilia Scaura (about 100 BC - 82 BC) was the daughter of the Roman patrician Marco Emilio Scauro and his second wife Cecilia Metella Dalmatica.

At the time of the birth of Emilia, Scauro was in his sixties and, in the role of princeps senatus, speaker of the Senate, he was one of the most illustrious politicians of Rome. After the death of her father, Emilia was raised by her mother's second husband, Lucio Cornelio Silla.

Silla used her stepdaughter for political alliances. In 1982, Emilia married and was pregnant by a man who clearly criticized the conduct of her father's dictator. Silla forced the girl to divorce. Soon after, Emilia married Gnaeus Pompey the Great, while she was still pregnant from her first marriage.

This marriage increased the popularity of Pompey and his ascent, since Emilia was an aristocratic patrician, while he came from a new family of senators. Emilia died in childbirth shortly after the second marriage. 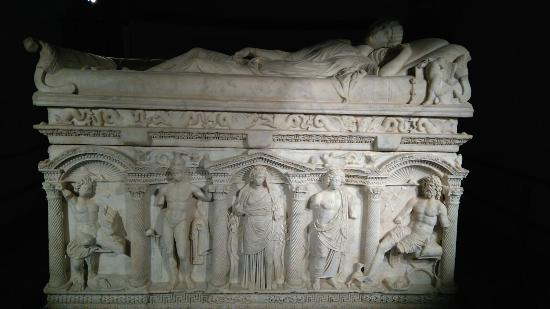 Source: museum of the castle in Melfi

yes, this is a museum of Melfi in South Italy