The Day I Almost Died 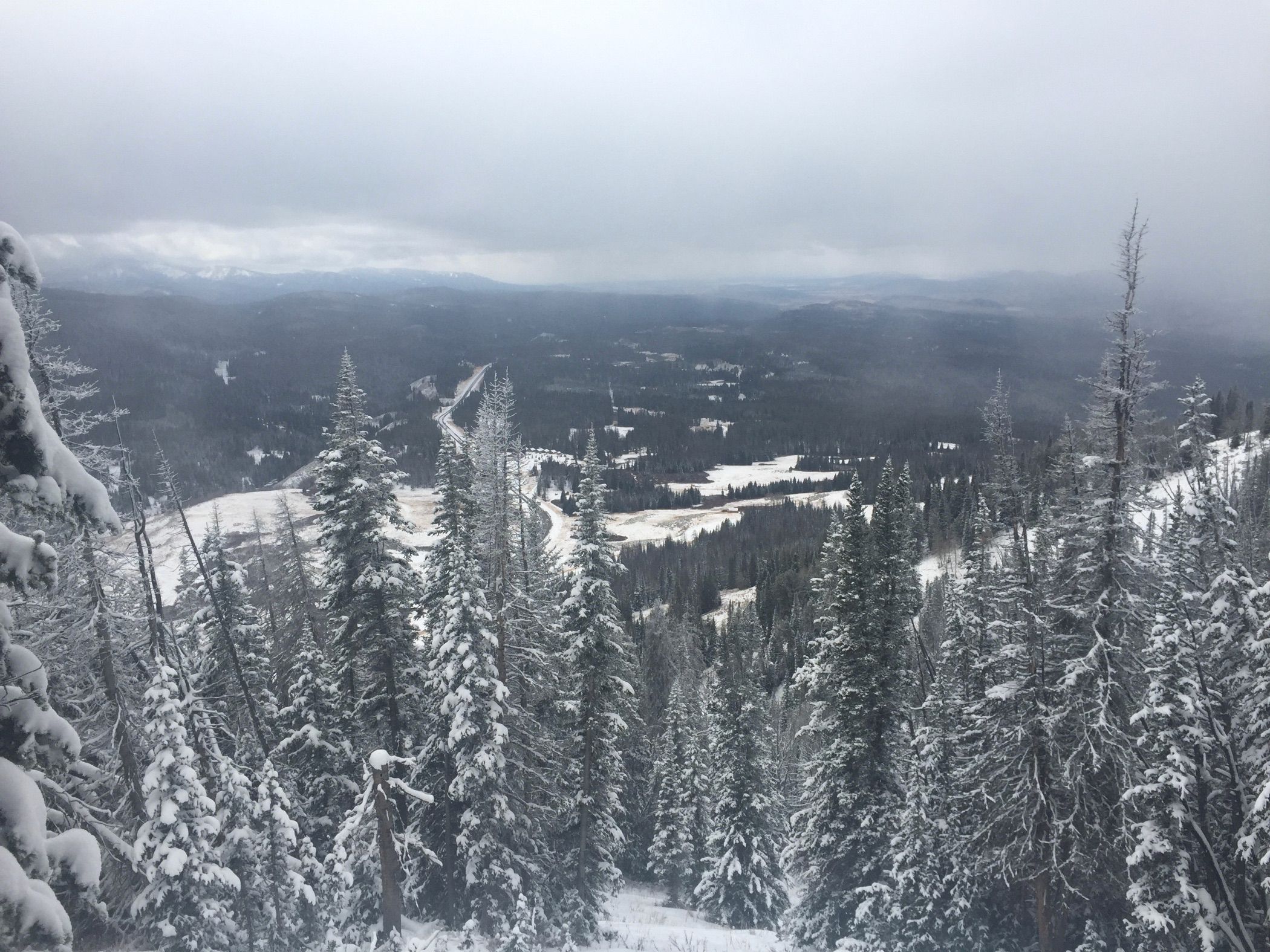 I climbed a mountain once. Not a figurative mountain. That’d be a cliche. It was a real mountain, somewhere in the Grand Tetons. I lost my glasses on that mountain. I almost lost my life.

From the bottom it didn’t look so bad. My eyes play tricks on me that way. They said, “Don’t worry, Gray. You’ll be up in no time. Just do it.” Apparently my eyes are also a spokesman for Nike. In any case, I listened. I parked my car on the side of the road, threw on my jacket, and set off toward the closest peak.

The snow swallowed my boots with each step. It was the light, cotton-y stuff, no good for a snow ball fight. But it did give the legs of my jeans a nice powdered donut look. More snow fell from the sky, floating around whimsically in the wind, seemingly ignorant to the downward pull of gravity.

That’s one of the things I love about the snow. It dampens ambient noise. Apparently this has something to do with enclosed air bubbles, like foam (or so Yahoo Answers tells me). Whatever the reason, snow can give any environment a sense of stillness, a feeling of calm. I felt rude, the coarseness of my breath and muddled crunch beneath my boots disturbing the silence nature commanded. For a moment I paused, stilled my lungs, and listened to soft rustle of the pines. It was all that could be heard. A whisper of wind, and that was all.

The first half of the trek was easy. Morale was high—I was on an adventure! Indiana Jones had nothing on me, I thought. The snow wasn’t too deep and the cold not too biting. Progress was being made, quickly.

Past the half way mark was when things took a turn. Mountains don't tell you this, but they get steeper as you go up. The snow seems to get more slippy, like it wants you to slide all the way back down, or hit your head on a rock. With every step up those white flakes—often described as heaven’s dandruff—drag you backward. It is a game of inches.

Have you ever tried to inch your way up a mountain? It gets tiresome. But I guess that’s just life.

My feet were now numb up to the ankle. Still, I was doing better than Steven Hawking on any given day.

By this point, you’ve surely shouted at your screen, “Gray, have you never seen 127 Hours??” Or maybe, “Gray, haven’t you seen Into the Wild?! Christopher McCandless died!” Yes, yes, I know. History is filled with stories of those who failed to take Mother Nature seriously. I had yet to accept this lesson.

Right about now I reached the 75% mark. The incline was so great using my hands became a necessity. Occasionally there was a branch or brush to cling to, but often all I could do was drive my hands into the snow and down to the cold earth below. Soon my fingers joined my feet, abandoned by the blood that once warmed them. Cold turned to tingling turned to nothing. Numbness.

Remember a few paragraphs ago? When I felt like Indiana Jones? That was gone. Now I felt more like one of those Nazis at the end of Raiders.

I stumbled into a cluster of thin birch trees. I actually don’t know if they were birch trees, but they were some kind of tree, completely void of leaves or lower branches. Whatever kind of trees they were, they made for great holds on the climb up.

There was a glimmer of hope when I emerged from that barren wood. I was close. I could feel it. The peak was within reach. But what is it they say? Most accidents happen within 5 miles of home? I don’t know if that’s true, but it makes sense. Knowing how close I was lulled me into a false sense of safety. So, I paused for a moment. I leaned against a lonely boulder atop the mountain. The boulder, eager for a friend, welcomed me with open crevices. A boulder might not seem like cozy place to rest, but I was just so tired. I felt like I had downed a cocktail from Bill Cosby. Apparently extreme lethargy is a sign of hypothermia. Who knew.

That was the moment, the moment I wonder if I could have died. What would have happened if I lost consciousness? Surely if I had passed out my body would have sensed it was in danger. It would have flooded my brain with adrenaline and shouted, “Get the fuck off this mountain!” Or, would it too be fooled by the cold, cushy snow? Would it think, “Let’s just lie here for a bit. I’m sure everything will be fine.” Next thing you know I’d be like one of those human popsicles littered all over Mount Everest. They’re still there, you know. The bodies. I suppose they’ve found the immortality many yearn for, their frost-chewed corpses an ever-present reminder not to underestimate Mother Nature. Jack London gets it.

Anyway, that didn’t happen. In an alternate universe, perhaps, but not this one. I caught myself drifting and pushed upward. The jagged cuts of boulder once my pillow now acted as handholds for the final ascent. Ten minutes later I had done it. I reached the peak.

You may think I was euphoric, filled with the joy of having made it to the top. I was not. I was exhausted, numb, and atop a fucking mountain in the middle of nowhere.

I decided my best bet was to pitch a tent and rest. So I did. Once the tent was set and sleeping bag laid out I stripped down to my mostly dry underwear. Funny thing about jeans: they absorb water. Or in this case, snow, which melted into water, and then re-froze into ice. Ice jeans. I had to punch them just to break the ice and then slide them off. Fun.

Once de-clothed and dry I slipped into the sleeping bag and slept. At 3:00pm. On a mountain. In Wyoming.

I awoke a couple hours later. The tips of my toes were still numb. The initial plan was to spend the night on the mountain, but that was starting to seem like a bad idea. How cold would it get overnight? Below zero? I decided my best bet was to make a quick trek down before the sun set.

For a brief moment I considered sprinting down the mountain in my underwear. I figured that couldn’t be any worse than sliding the ice jeans back on. Ultimately I thought better of it and somehow managed to shove my feet through the frozen denim. Fully clothed, I packed up my tent and started back down the mountain.

The descent was a short experience. I said goodbye to the lonely boulder where I could have died. I thanked the barren wood for enabling my climb. I slid downward atop the slick snow that once conspired with gravity to halt my ascent. In a matter of minutes I was a quarter of the way down. My usual optimism returned and I couldn’t help but laugh at the whole thing, sarcastically chiding myself along the way.

The light began to fade as the sun dipped below the mountain peaks. A gray twilight guided the second half of my descent. By the time I reached my car the light had gone completely, the valley brightened only by the muddled glow of the snow. I hopped in the car and turned on the heat, patiently waiting for the feeling to return to my appendages. It did, thankfully.

What’s the moral of this story? Don’t be a fucking idiot might be one lesson. Proper clothes, better physical fitness, a quick text to a friend or family member—any one of these things could have dramatically reduced the danger of the situation. If someone knew where I was they could have at least found the body.

But there is a greater lesson I learned on that mountain.

Smart people will tell you to take risks in life. They’ll feed you cheesy slogans like “You miss 100% of the shots you don’t take.” Or “You’ll never know if you never try.” These words are true. It is important to take risks. But what people rarely talk about is the line between risk and recklessness. I have taken many risks. But climbing that mountain is the only time I’ve crossed that line, the only time I’ve acted recklessly.

So, if you’re debating whether or not to do something that seems risky, ask yourself, “What is the worst case scenario? How can I recover if that happens? Is there a way back?” If the answer is no, maybe you should avoid that path. Maybe the consequences are too great, too permanent. But often you will find even the worst case scenario isn’t so bad. Most of the potential damage can be mitigated or undone entirely. In those cases, act decisively and take the risk. Fortune favors the bold.

It is good to climb mountains, both literal and figurative. But to do so without thought or without preparation is reckless.

Be risky, not reckless.

Hello, friends! Happy 2018! As part of the new year, I’m challenging myself to blog for 60 days straight. I’m calling it the 60 Days of Steemit, mostly because I’m a fan of alliteration. Anyway, expect to see a new post from me every weekday through February.

See you in the comments below! (Or on Twitter…!)

Gray! That was damn good! A real fun read. Enjoyed every sentence as they rolled smoothly into beautifully crafted paragraphs. Have you read Deep Survival a nice though not nearly as eloquent book on the subject of not taking Mother Nature seriously. Looking forward to future posts, a happy follow!

Thank you, Ilana! Glad you enjoyed it. I haven't read Deep Survival, but it looks like my kind of book! Will be sure to check it out. -GW

Wow, that sounds full-on. Glad it turned out ok. Good story though.