Itchy (left) and Scratchy. The cats who saved my life. (TRIGGER WARNING: DOMESTIC VIOLENCE AND SUICIDE) (WARNING: some strong language) I know the title sounds a bit crazy, but just bear with me. Maybe by the end of this, you'll understand why they hold such a special place in my heart.

In a couple previous posts I've made, I talked about the abusive relationship I was trapped in for 8 years, but I didn't really go too much into detail about what I actually experienced. I'll save most of the details for another post, and focus this one on these two.

Itchy and Scratchy were both rescues in a way.

I found Itchy on Craigslist back in 2009. An older woman had posted about the litter of kittens her cat had just given birth to. She was selling them… and out of the litter, there were 2 all white, a calico, and an all black kitten (Itchy).

She had said in her post that the small black kitten was not for sale since he was black and was sure to bring nothing but bad luck to anyone he came in contact with. She was going to take him to a local shelter that was known for killing animals. She didn't even want to give him a chance.

I contacted her, and told her I'd be glad to pay double just to take him. She tried talking me out of it, saying that he was sure to ruin my life with the bad omen he carried around with him. (I wish I was making this up. This woman LEGITIMATELY thought he was some kind of demon cat.) But I wouldn't budge. Eventually, she said if I wanted him that bad, I could have him for free. 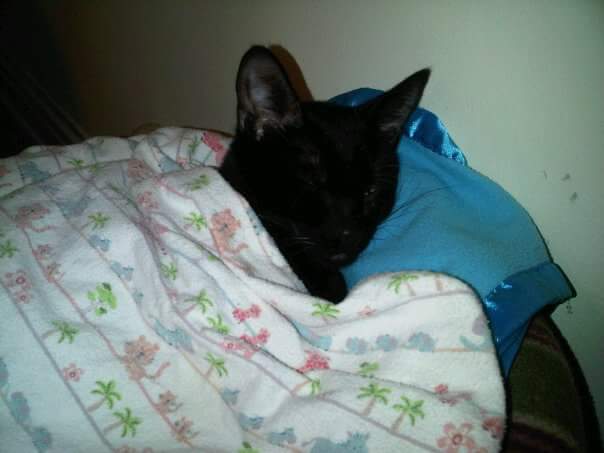 3 years later, I met Scratchy. My ex had a co-worker who owned a cat, and she had a pretty hefty litter of kittens herself. I think there were like, 8 kittens total. Scratchy was the runt of the litter, and no one would take him. The owner had decided that Scratchy wasn't going to make it. He was a runt, after all. He couldn't eat right, and required being fed by a syringe. (You know those plastic ones that you give children amoxicillin to? Those ones.) He was too little to climb into the litterbox. Etc. He had a million and one reasons as to why this tiny, helpless kitten needed to be put down. I took him in, with all his responsibilities and needs, and within 2 days was eating solid food and using his tiny litterbox (that I made out of a small cardboard box) all on his own. I developed a bond with these two over time… a bond that felt closer than I ever thought imaginable. They were so goofy. They made me laugh with their ridiculous antics. When I'd get home from work, or the grocery store, they would meow frantically in excitement and climb all over me. Purring. Itchy would even climb on me and sit on my shoulder, like a parrot. Any time I'd go to the bathroom, they'd both sit outside the door, meowing and scratching at the wood until I'd let them in. 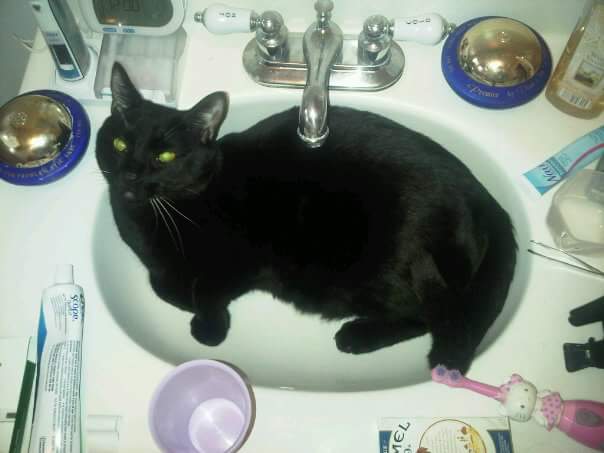 As I mentioned, I was in a violent, abusive relationship for 8 years. He had taken me away from my home in Missouri to Minneapolis, Minnesota. I had no friends. No family. All I had were my cats.

Any time an incident would happen, they were always there. Both of them. Curled up next to me as I cried into their fur. Licking my face… purring… comforting me. They would even sit there and let me dress them up in stupid hats for my own amusement, just to put a smile on my face. They never seemed to mind. During one of the attacks, Itchy actually got hurt because he had tried to attack my ex. I had never seen a cat protect a human being like that before. 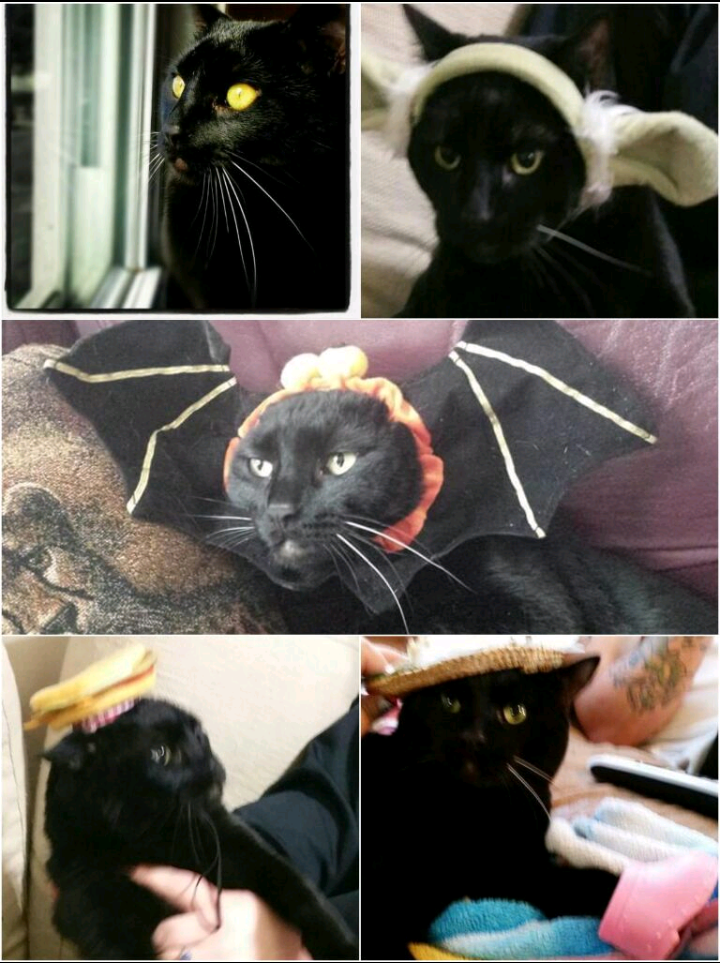 One night, the worst of all the incidents happened. My ex and I had got into a heated argument about something so trivial and stupid that I don't even recall what started it. I just remember him pulling out his gun on me.

I was sitting on the couch when he came back up from the basement. He grabbed me by the neck with one hand and slammed my head into the wall behind me. With the other hand, he had his gun, and he pressed it against my forhead. He looked me dead in the eyes and said "You will NEVER leave me. If you do, I will fucking kill you. DO YOU UNDERSTAND. I WILL CUT YOU INTO SMALL PIECES, SPREAD HALF OF THEM THROUGHOUT THE STATE, AND THE OTHER HALF I'LL SEND TO YOUR FAMILY. YOU WILL NOT FUCKING LEAVE ME. EVER."

He dropped the gun on the cushion next to me and was now squeezing my neck with both hands, and after a moment, I blacked out…

When I came back to, I ran back upstairs to our room and locked myself in there for the remainder of the evening. I made a decision that night.

I was going to take my own life.

I had it all planned out. I was going to take a bottle of sleeping pills and a bottle of Tylenol. I was done, and couldn't find a way out. I had nothing. No one. I was completely alone. And I just… couldn't take life anymore.

After my ex went to bed, I went into the bathroom and locked the door. I sat in there for about 20 minutes (although it seemed like decades) thinking about my family. My brothers and sister. My parents. I was isolated and wasn't allowed to contact them. They hadn't heard from me in years. They probably thought I hated them. I felt like I had somehow let them down by allowing this to happen. I thought about my life, the life I wanted, and the life I actually had. I thought about my relationship, and couldn't help but feel like all of this was happening to me because I had ALLOWED it to.

I tried to ignore them. But every meow, every scratch… it felt as though they got louder each time. I caved and finally let them in. I decided that I'd have one more tearful cuddle with both of them on the bathroom floor before I "go".

While laying on the cold ceramic tiles, Itchy curled up next to my head, Scratchy in my arms… I felt this warmth come over me. I can't explain it. But it's as if something was telling me I couldn't give up. They needed me as much as I needed them. The purrs, the soft little mews they'd let out every few minutes, they distracted me from the emotional and physical pain I was in, and they made me feel like everything was going to somehow be ok. We stayed there like that for a while. I'm not sure how long, but it was long enough for me to fall asleep for a bit.

When I finally escaped, I couldn't bring them with me… and it absolutely broke my heart. Even now I get teary-eyed thinking about how I couldn't bring them with. That's a long story in itself, that I will save for another day. But I will never forget these two. They were my only friends when I had no one. They gave me a reason to get through the day. They saved my life... and they will both hold a special place in my heart until my final breath. I will never meet another cat, or another animal for that matter, that will mean as much to me as they do. Even though they're no longer a part of my life, I will forever be grateful for the time I had with them, and for everything they did for me.

"Until one has loved an animal, a part of one's soul remains unawakened." -- Anatole France 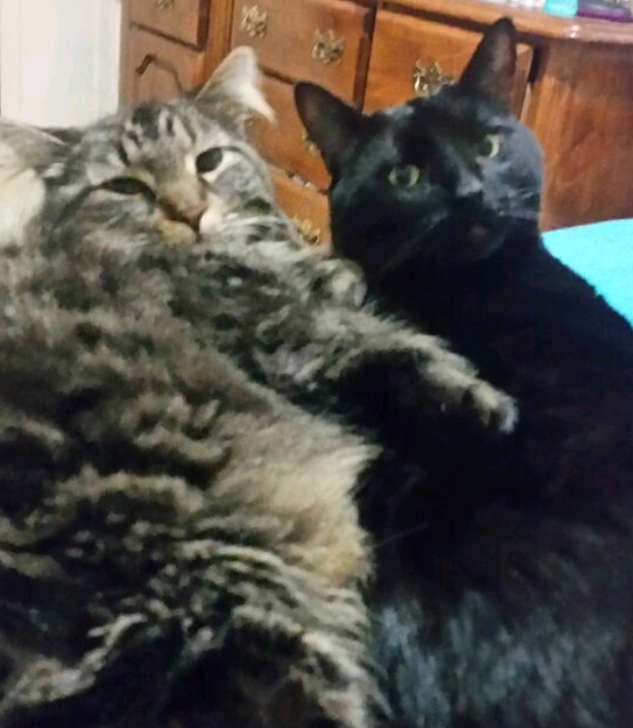 Such a sad story,nice write up though,i followed you,you can also check out my write up too.
Thanks.

I will check some stuff of yours out now. Thanks for the follow!

you are welcome and happy new year !

Holy. Crap!!! Amazing story and cats. I cant imagine hiw hard it was too leave them. ❤️❤️❤️❤️❤️❤️❤️❤️ And im also proud of you for doing it.

I love these pics so hard. What a really nice blog :)

Thank you! These pics were some of my favorites out of the MANY pics I have of them. I tried to keep it to only a few of the best. Thank you for your kind words!

alaynaclair!! Thank you, your Post"(Itchy (left) and Scratchy. The cats who saved my life. (TRIGGER WARNING: DOMESTIC VIOLENCE AND SUICIDE) (WARNING: some strong language))"

Thank you for sharing that sad but beautiful story! I'm sure they are well and it's great that you are now in a safe place!! Stay well...

Such a sad story, but beautiful at the same time.
I hope wherever they are out there, they are safe, warm & well fed.
And that you know how glad we all are that you found the strength to escape.

I hope the same. And thank you! Im so blessed to have bryan and all of you in my life. you guys have taken me in as one of your own with open arms, and i love and appreciate all of you for that!

powerful story. you really didnt need my vote on it, but u have it.

Oh i guess i didn't realize you were looking for stuff to vote on. I thought you were just looking for things to read that others have posted. My mistake. Im still so new to this and am figuring everything as i go, day by day. Thank you for the upvote though. Its greatly appreciated!

It's all good we are all new at some point. I like to help out people who are undervalued who are new; people who might have only gotten a few cents for their posts.

Congratulations @alaynaclair, this post is the second most rewarded post (based on pending payouts) in the last 12 hours written by a Dust account holder (accounts that hold between 0 and 0.01 Mega Vests). The total number of posts by Dust account holders during this period was 9581 and the total pending payments to posts in this category was $4237.20. To see the full list of highest paid posts across all accounts categories, click here.

This post has been voted on from MSP3K courtesy of @discordiant from the Minnow Support Project ( @minnowsupport ).

I i love cats thanks for posting

its like a sad story but i think they are well..

We saves lives / hearts all d/time! 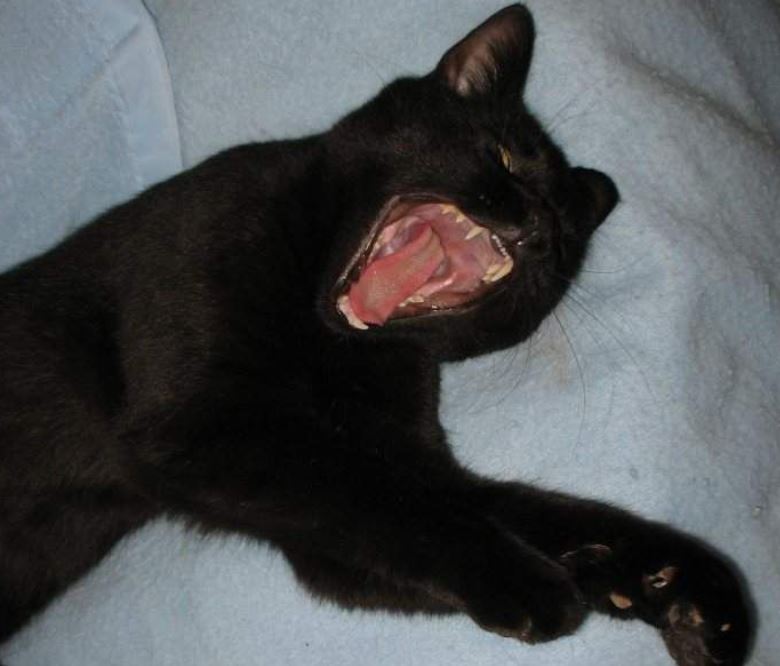 Awww... :( That's terrible. I'm sorry to hear you went through that. He's narcissistic I bet. Some people just like to control others and manipulate you into thinking you are alone etc. I'm so happy your cats saved you. Cats are really amazing. ♥ ♥ ♥