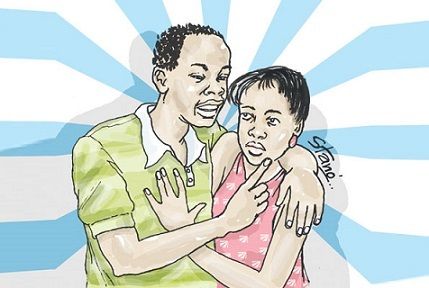 Julian invitingly withdrew behind the wall, chased by Prisca who frowned as she neared the bend…. Their games daily stretched late.

Soon as usual, the little girl drifted off to sleep. To the west, Julian gazed at the red brazen sky. It reminded her of a fragile memory. She dared to revisit it.

It started on an identical afternoon; the sun had just set. Inside the walls of a fine room, she sat half naked on a bed as one might in a doctor’s ante-room.

Her shadow, silhouetted on the wall as the candle dimmed out, gradually misted away into the pitch black of the room. She could feel the only other presence by his breath, warm against her cheek as he whispered:

It won’t hurt,
If you love me…

How did it feel sleeping with a man?
“To strip you naked is always their only aim”, her mother previously warned.

But heart throbbing, fingers trembling, her world dissolving, Julian surrendered. That night, she had her first experience with a man.

She swore to never love again. But the man wooing her now differed: “Move on with me!” But was it possible?

Travelled into memory lane, she was jerked back by her mother’s voice. “Julian, its dark. Bring Prisca into the house,” she said, asking why she looked worried.

“Do you think it’s time to move on?’ Julian responded.

“Move on, dear,” her mother comforted, teasing; “The man who texts calling you Sweet Summer! Are you seeing him?”

“Winter is over my daughter!”

And as Julian gazed at her own daughter; she knew her mother was right. “Thanks a lot mum. Tomorrow I am inviting him for lunch.”

Love stories are always nice to read. Another good submission.

Eros or Agape: I always try to make sure my stories gravitate towards one of the two.
Thanks for sharing in them.

Hello there, @ebitularmbert :)
I really like this one. It is amazing how you imply so much emotion with so few used words...
Have a great day!

Thanks for your thoughts