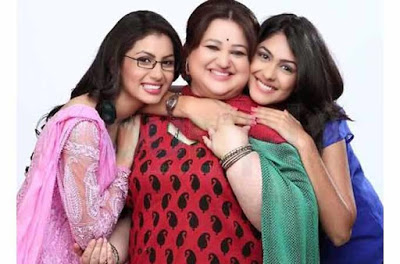 Read The Story below

Suresh now comes to pick Pragya up for works.
He says he wants to file a case against Tarun and his family for making outrageous demands at the wedding.
And Pragya told him to forget about it because they are not important to her.
She gets on his scooter and he took her to the school.

Grandmother told Sarla that she will make back the money that was spent on the wedding because 5 clients are already making bookings for the hall and they can sell the sweets.
Her brother, Kabir, tells her to stop crying

Kabir's wife calls him outside and complains that his sister is making so much money from the hall and the hall is in his name, so why does she make so much money and he doesn't?
She tells him to go and tell Sarla that he wants to run the hall.
Kabir says her daughter's wedding was just called off and she has 2 daughters to support.

Pragya gets to work and her colleagues begin to ask her about the wedding.
Suresh tells her that her eyeliner is smudged, so she needs to go to the bathroom to look at it.
She gets there and notices that it's not smudged then concludes Suresh wanted to get her out of the way because her colleagues were asking about the wedding.
She gets back to the office and bring sup the issue about her wedding but her colleagues say it's not important.
Pragya later asks Suresh about it and he says he told them not to bother her with it.

At home, one of the vendors they used for the wedding, refuses to take some of his things back.
Sarla gets very upset and her brother tells her to calm down.

Later he comes to give her the money from the vendor and tells her not to cry again.

Bulbul says she's going out.
Sarla says she has to go to the jeweller to pay for her jewellery. She begs Suresh to take Bulbul.

Bulbul drives the scooter and Suresh rides behind, complaining and begging her to careful.
Bulbul receives a phone call as she rides and Suresh begs her to park and talk.
They argue till she stops.

Kabir tells Sarla that he will miss her tea when he goes back.
Sarla's begs him to stay longer.
He says he has to go back to his children but Sarla and her daughters should come and visit during the holidays.

Bulbul and Suresh come back and Bulbul hands the box of jewellery to Sarla.
Her sister in law looks at the jewellry with interest.

Suresh says he wants to go but Pragya begs him to stay and eat.
He says he has to go.
Sarla tells him that they will pack some lunch for him since buying takeaways upset his stomach.

Sarla's packs takeaway for Kabir and his wife as they are about to leave.

Kabir says he needs to talk to Sarla about the hall. He says the hall is in his name and he wants it.
Everyone is shocked.
Grandmother says he wants to take it now and doesn't remember what condition it used to be in when his father died. She says now that Sarla has made it what it is, he wants to collect it.

Kabir's wife tells grandmother not to interfere but to leave the siblings to sort it out.
Sarla tells her that her mother in law is like a mother to her.
Her sister in law says the hall belongs to Kabir and they have children to take care of as well and it's not their fault that Sarla's late husband didn't leave her anything for her.

Kabir tells Sarla that he wants the deeds to the hall.
His wife says if she refuses, they will go to court.
Sarla tells Kabir that she will give him the papers and she doesn't mind having a male member of the family around.
His wife says they won't stay but will come back tomorrow.

Sarla packs Kabir's lunch for him and tells him not to go forget it. She carries on as normal and he is too ashamed to look at her.

At night, Suresh goes to the window to say goodnight to Pragya as she closes the windows.

He tells his friend that she looks upset and something must be wrong.

Pragya is in bed when when hears a knock on the door.
She opens the front door and sees Suresh.
He asks her what's troubling her.
Pragya tells him that her uncle told her mother that he wants the wedding Hall back.
Suresh is shocked.

Next day, Kabir, his wife and some lawyers arrive at the house.
As they enter, Sarla is very nice to them, she receives them warmly but her sister in law says they only came for the title deed.
Sarla gets the deeds and says she will only give her on one condition; when properties get distributed, it brings discord among family so she wants them to promise it won't be the case with them.
She hands the deeds over to the dismay of her daughters.
The lawyers ask how long it will take her to vacate the hall.
Sarla says she will need like 4 to 5 days.

Suresh enters and says Kabir has a right to the hall by law. He hands out some papers and explains that they are legal papers.
Kabir and his wife look confused.
Suresh says a roof was built on the hall and the law will come and demolish it because they didn't get the permit for that. He also says a loan of 25 million was borrowed so the owner of the hall needs to pay and also some vendors who are being owed have been patient because of the relationship they had with Sarla but now they want their money today because they hear there is a new owner.
He says in total, they will be paying 45 million.
Kabir's wife panics and tells Sarla to keep the hall and talk to them after paying the loan off.

She runs out after greeting them goodbye and Kabir thanks Suresh for helping him do what he couldn't. He says he doesn't know how he would have faced his sister.
Suresh says he doesn't have to thank him.
Kabir says Suresh is the man of the house and a guardian angel.

He leaves and Sarla says Suresh does so much for their family; he's the man of the house.
Suresh says Sarla is the one who holds the house together, so she is the man of the house.
He asks for some tea.
He sits with Pragya and she offers him some biscuits. He refuses at first then collects it.
Bulbul watches them and starts to tease them with a song.
Pragya looks at Suresh in admiration.

Sarla serves Suresh tea and says there are so many loans with the wedding hall.
Suresh says he knows someone at the corporate office that can help them so they may not have to pay the taxes and penalties.

Bulbul is in the room with pragya. She complains that Suresh has to take her but Pragya reminds her that if it wasn't for him, she wouldn't be going at all.

Bulbul's friends are waiting for her in a car but she is waiting for Suresh to get his scooter started.
On the way, she complains that he's too slow but he insists he has to move within the speed limit.

Pragya calls Suresh and he assures her that he is looking after Bulbul.
Sarla tells Pragya that they should find someone for Suresh to marry. She suggests some girls but Pragya says they are not good enough for him.
Sarla tells Pragya that he's a nice man but a little shy. She gives her a look and Pragya says he doesn't have feelings for her.
Sarla says he's in love with her, she can feel it.

At the concert venue, Abhi arrives and the crowd freaks out.
Suresh doesn't understand what the fuss is about.
Some bouncers push the crowd back.
Suresh gets upset and says they are holding the women back and it's against the law. He threatens to sue and continues to make a fuss.
The manager gets tired of him and instructs the guards to throw him and his friends out.

Suresh, Bulbul and all her friends are thrown out.
When they get out, Bulbul is furious. She asks Suresh if he's satisfied now. She tells him that she doesn't like him, he's an unhappy man and he said bad things about Abhi but Abhi brings a smile to people's faces and tries to make them happy.
Suresh looks at her, too shocked to respond.
She says she will go home and cry but she feels sorry for people who close to Suresh's heart because he's a man who doesn't like to see anyone happy and doesn't deserve to be loved by anybody.
Suresh looks really hurt by her words.

Bulbul follows her friends back home in their car.

When she gets home,Pragya asks what happened but Bulbul ignores her.

Suresh's friend asks why he's home early and reminds him to go and say goodnight to Pragya by the window.
Suresh says he just wants to be alone.

Pragya gets to the window but Suresh is not there to say goodnight. She becomes worried.
Sarla watches her and says shes's sure of 2 things 1. Bulbul and Suresh can never get along and 2. Pragya and Suresh love each other and maybe that was why her marriage to Tarun didn't work out.