Ozone layer
Knowing very well the different layers of the atmosphere will help us to have more knowledge of the ozone layer. There are different layers of atmosphere which are troposphere and stratosphere. In the troposphere (first layer), small aircraft flights, mount climbing and gas balloon are the activities that take place there. This layer is 10km away from the earth surface. 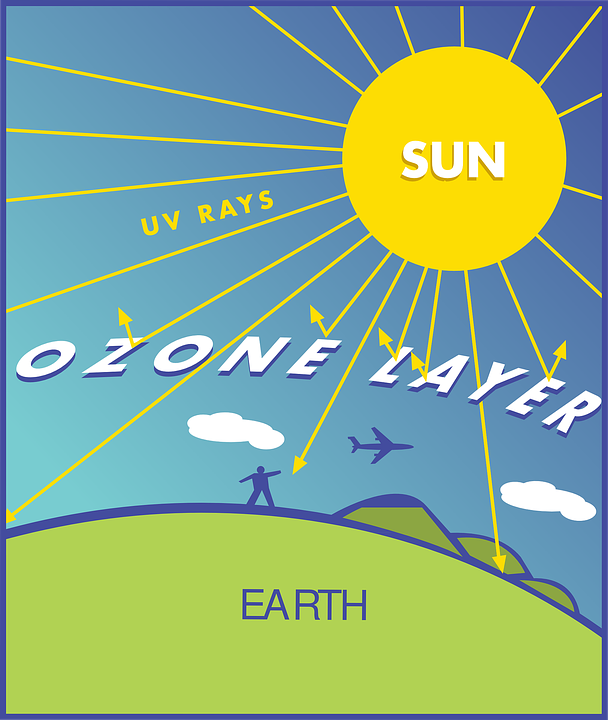 The effect of exposure of human to these ultraviolet rays include; immune system damage, skin cancer and cataracts. Ultraviolet rays possess power to destroy aquatic ecosystem, terrestrial plant life and single cell organisms. These long term effects of ultraviolet rays on human beings, plant and animal is being averted by the ozone layer because this layer possesses the ability to absorb up to 97-99% of the harmful radiations.

Human-produced depletion gases include cholofluorocarbon (CFCs), methyl chloroform, hydrochlorofluorocarbon (HCFCs) and carbon tetrachloride. These gases are eco-friendly and their application could be found in areas like air conditioning, refrigeration, foam blowing, as solvent and cleaning of electronic component. Treat to marine life
Over exposure of UV radiations to the aquatic lives threaten their survival. For example planktons which appear up the aquatic food chain is affected by exposure to high UV rays which results into decrease in the number of planktons, thereby disrupt the marine food chain.

If only we can desist from using these items..

@tpicric1, you are very correct

Ohh that really good to know thanks for sharing