When I was little, I had a Sony Walkman radio cassette player I loved so much and played with a lot. I also had one cassette I love playing most of the time and whenever you see me with earpiece in my ear, it is most likely to be that record that is playing. But the cassette did not last as I wanted it to cause for no reason I discovered the tape stopped producing clear sounds and the rest was stories. Magnetic tapes like the cassette has an average lifespan of 14 years (with lots of variables left as constant). The same can not be said for our computer hard drives as they have even lesser lifespan and are more fragile when compared to many other storage devices as even a sudden spike its surrounding temperature could damage it totally.

Well say hello to the 5 dimensional data storage technology capable of storing information safely for a period approximately equal to twice the age of the earth (13.8 billion years). There’s more, it has a whooping storage capacity of 360 Terabytes and can withstand temperatures of up to 190 degree centigrade. The period of time it can store information for the stated period of time was calculated for the above temperature range but at room temperature, the storage system can store data far beyond 13.8 billion years.

The base element for this technology is a nanostructured glass which allows data recording in 5 dimensions, this recording is done using a process called femtosecond laser writing. Okay I’ve said a lot in just one sentence so let’s back it up a bit. Nanostructures are simply structures within the nanoscale. When describing nanostructures, the dimensions of the volume of the object is of great importance for instance nanostructured surface exists only in 1 dimension and only the thickness of the surface is considered. A typical nanostructured surface has length in the range of 1nm (a billionth of a meter) to 100nm. An example of nanostructures existing in 2 dimensions is the nanotube with diameter between 1nm to 100nm and length equal or greater than a nanoscale. [a femptosecond laser labcredit: wikimedia]
Femtosecond lasers are lasers that produces optical pulses in a period of ten to the power of negative fifteen (10^-15). The process of producing lasers of this quality is called Mode-locking. Lasers have been treated in the stem community by many authors including myself and as such I’ll assume that we all are familiar with lasers. Lights emitted by lasers are seen as the purest form of light, though this is true but this does not also imply that the resulting light is of single and pure wavelength.

The emission frequencies (which defines the bandwidth of the laser) and wavelength of laser are determined by many factors like its gain medium which are basically of two types; wide spectra and linear spectra gain media. When a gain medium is composed of the type wide spectra, it allows for tuning of the laser frequency. Apart from gain medium, another factor that determines the frequency of light is the resonant cavity of the laser which comprises of two mirrors at angle 90 degrees facing each other. As light bounces between these two mirrors in the cavity, both destructive and constructive interference occur resulting in the formation of what is called MODE of such cavity.

The frequencies allowed to oscillate in the cavity are frequencies that experienced constructive interference and have the ability to regenerate itself while the frequencies that experienced destructive interference are suppressed. The period of each light pulse is determined by amount of these modes that are oscillating in phase. Credit for this technology go to the scientists at the University of Southampton and was first demonstrated experimentally in the year 2013 by writing a 300 kilobytes of text document to the glass disk.

The idea here is to store large amount of data using light in a transparent glass material which is not sensitive to light. The material that perfectly fits into this description is the fused quartz and is used as the storage element. To store data in the quartz, data is modulated by leveraging on four properties of light:

By combining the above properties of light, information can be modulated and stored in the fused quartz. The period of storage stated above was arrived at by testing about 18 layers of nanosurfaces using light pulses of energy 2.0x10^-7 joules with a period of 600 femtoseconds and frequency of 500 kilohertz. The decay time of this setup was measured to be around 3*10^20 at temperature of 30 degree centigrade. When the temperature was increased to approximately 190 degrees centigrade, the resulting decay period was measured to be 13.8 billion years as stated above.

A typical example of 2D data storage system is the optical compact discs (CD). The CD consists of millions of tiny lines. These shiny lines are capable of bouncing back laser light that are incident on them and these reflected lights are interpreted as either ones or zeroes. To distinguish between 1 and 0, the lines have crests like square waves and troughs. When light shines on the crests, it is interpreted as ones and when light is reflected from non-crest region of the line, it is interpreted as zero. 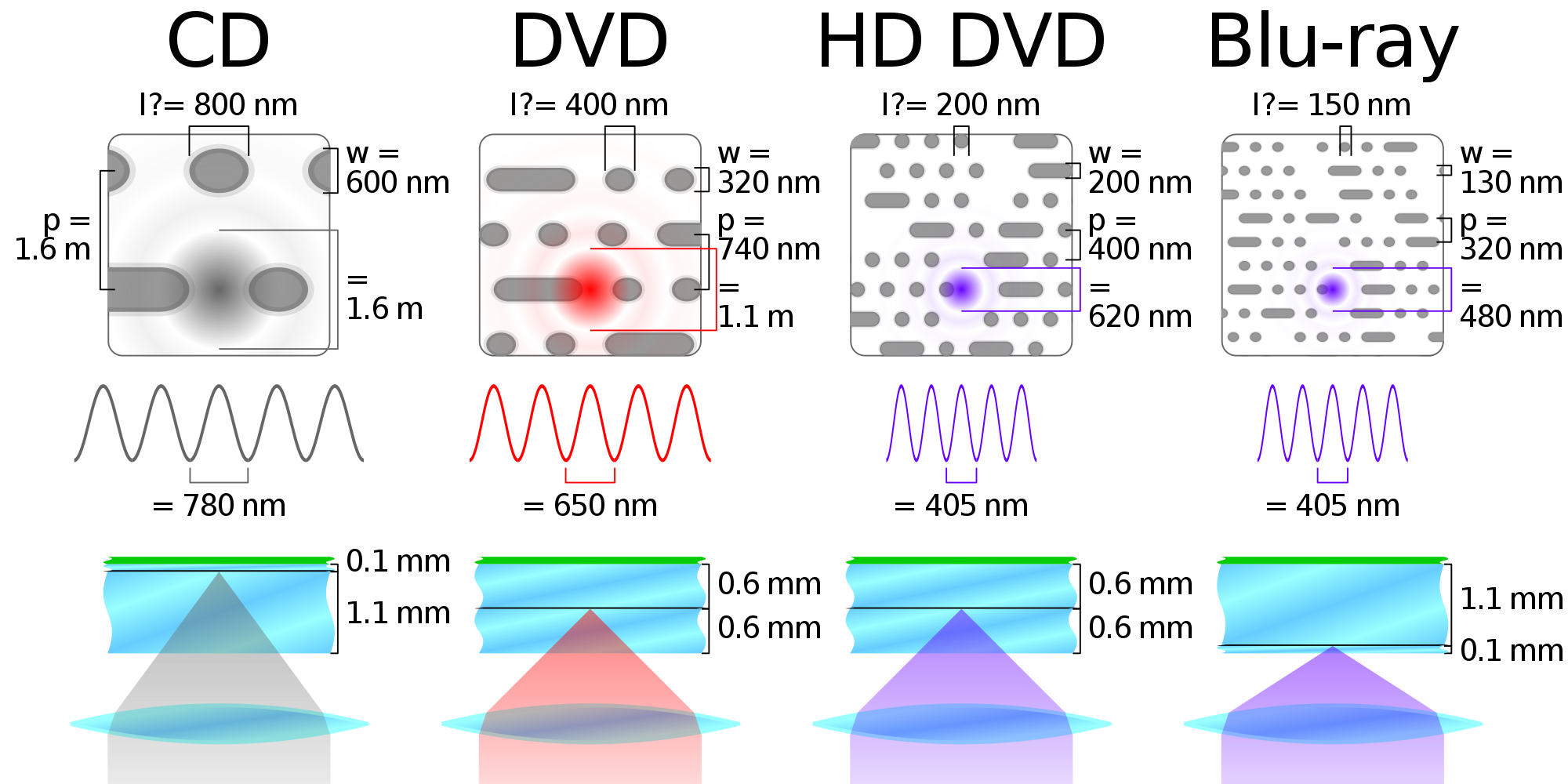 As already stated above, CDs and even DVDs consists of one layer of shiny lines which can store a very limited amount of data for a very limited amount of time. 3D data storage increases both the storage capacity and storage period of 2D storage medium by increasing the layers of these reflective lines but there are problems associated with these layers as light travels in a straight line by default and hence, is bound to suffer noise as a result of interactions with these layers. [credit: wikimedia]
To prevent this layer interaction which cause interference, 3D data storage employs a nonlinear optics in the cause of reading and writing information to the surfaces. Another way of overcoming this noise is by having these layers activated electrically when needed. A typical example of 3D storage system is the transparent compact disks (CD) or the transparent digital versatile disks (DVD) where the optical read/write head has variable depth of focus. Here, a change in the depth of focus will mean reading or recording in totally different data layer.

Not much has been said about the 4D data storage or its existence.

5D data storage technology differs from other forms of data storage in the sense that instead of using reflective lines, dots are imprinted on the data layers in place of these crests on the reflective lines of the 2D and 3D storage systems. These microscopic dots are known as nanogratings. These gratings have different orientations which helps prevent the issue of interference encountered in the 3D storage systems.

It is termed 5D storage system because data is encoded and decoded as a result of the orientation of the nanogratings, size of the dots and spatial dimensions of the glass (in 3 dimension). To read or decode information stored in the disk, a polarizer alongside optical microscope are used. You can view the making of this awesome tech here

Right from time information about technological developments and even ways of lives of different societies have been handed down from generation to generation through one failing storage medium to another. The Ten Commandments in the bible was handed down to us as inscriptions on stones, some peoples cultures were developed as a result of some drawings on caves and so on but with this technology, the United Kingdom scientists assures us that this trend don’t need to continue as information can be saved for billions of years to come in a safe non fragile glass storage medium.

As at the moment, many important documents from human development history like the Holy bible (King James Version), UDHR (Universal Declaration of Human Rights), Newton’s book on optics has been stored in the 5D storage system and was presented to the United Nations Educational, Scientific and Cultural Organization in Mexico during the International year of light ceremony.

The 5D data storage system as at the time of compiling this post can store up to 360TB of data under temperature of 190 degrees centigrade for 13.8 billion years. The application of such technology can easily be figured out and could have many positive implication for future computing. Currently, the the technology has not been commercialized but the geniuses at the University of Southampton, UK promisses that this would be a reality in the nearest future.

Seeing this 5D storage technology for the 1st time from your post.
Thanks for this informative and educational post.
I would like to make use of it.

Yeah, boss it's a really cool technology. You can read up on it from the reference section. Thanks

Very interesting article. I would love to see a technology like this become the new standard. If you think about how we have been impacted from the current HDD generation and the large amounts of data we can store now, something like this would bring unlimited possibilities.

I could see a world where every person has multiple copies of all the worlds information with them at all times.

Thanks bro for stopping by. 5D data storage system hold the key to many possibilities. Even the relevance of Internet is treatened here except the extremely dynamic pages Luke the YouTube and Facebook.

This would be great in the future, in case we decide to manufacture a sort of universal encyclopedia of humanity to last for eternity (or several billions of years as you mentioned).

I have the idea that humanity can one day be able to create such a thing. A device with hundred of thousands of years full of information and knowledge.

Perhaps something similar to those crazy monoliths in Space Odyssey :D

Lol, he'll yeah! I knew something like this would turn up, but the only thing I'm concerned about is the cost. It's just 1 inch in diameter which means it would need a whole new player/reader/writer. Thanks man

Your posts are always breathtaking. Nice seeing a techie mate. I think I'd be needing this tech soon o - my HD is already full!

Hahhahaha, thank you so much @mrbreeziewrites. I can't also wait for it to be commercialized but the question again is, will it be affordable?

Definitely, the cost would be a major limitation. But since I've you here, you can easily buy me one!

The day man stops innovating is the day the world will end. Thanks for this enlightenment.

So the hard disks that we carry about actually have a life span of less than 14 years? Or did I misinterprete you?

No you didn't. Though some could go a little bit more than that but few will cross that line cause of many physical factors. This is really a welcomed development but another thing I really feel might be an issue is its size. Imagine losing 360TB of information 😅

Very interesting. Never heard of this technology. Seems like full of promises.

It's already a reality just that it has not been commercialized. Feel free to read more about it from the reference section above

This post has been upvoted and picked by Daily Picked #15! Thank you for the cool and quality content. Keep going!

Don’t forget I’m not a robot. I explore, read, upvote and share manually :)

This is educative sir...few minutes ago i never knew anything about the 5d data storage and right now i seem to have a whole lot of idea.
Keep steeming.

Thanks man. It's one of the purposes of steemit community