Being in an environment where the atmosphere is calm, feeling cool, fresh air and relaxed is exciting. “Free gift of nature” is what we normally use to qualify the cool sea breeze and the land breeze but scientifically all these activities are natural phenomena that takes place during day and night hours of the day. 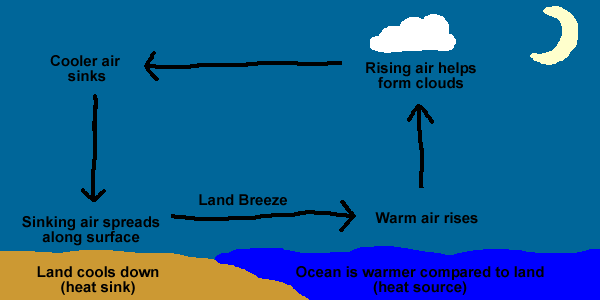 credit:emaze.com
Scientifically, the land breeze is produced through the cooling of the land than the water in such a way that at night with the wind's light, when this process takes place. The air which is over the water increases gradually, as the increments of the air is observed gradually rising, the air above the surface of the deep-sea must be exchanged and this is possible by pulling the air below the water (land) to the surface of the water.

The above procedure creates a sea breeze.
This diagram is a typical illustration and the process that takes place at night. The land which is the heat sink tends to cool down faster than the sea, the sea is warmer at night which rises to the atmosphere to form the clouds and then the air which is above the land is now cooler than the air above the sea.

During all these scenarios, a convention current is set up in the opposite direction which brings about the sea breeze. credit:emaze.com
During the day as the sun shines and heats the land, it tends to heat up more faster than the sea itself then the air above the land is heated, expansion takes place and rises Cool air above the sea is denser, sinks and moves in to replace the warmer air which brings about sea breeze. Then the ocean is cooler compared the land Sea breeze from the above image is simply the wind which blows from the water but according to Wikipedia that explains sea breeze to be

A sea breeze or onshore breeze is any wind that blows from a large body of water toward or onto a landmass; it develops due to differences in air pressure created by the differing heat capacities of water and dry land. 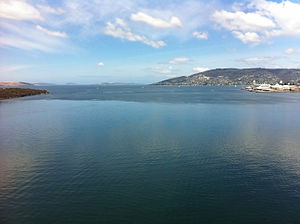 The occurrence of sea breeze is always the sunny and hot eras due to the uneven level of heat on the water and land, this is quite simple and self-explanatory. This occurs at the night hours after the days sun that heats the surface of the ground fast enough than the surface of the water.
Have you ever observed that when air is warm, it tends to be lighter than the cool air which brings about the rise in warm air.

Structure of the atmosphere

Thank you boss, i appreciate.

I saw similar post that readers will like...lol...don't be scared brov...this an awesome post and well detailed...keep it going boss!

Thanks boss, i see you.