Irene Energy ICO Review / Stellar is a threat to Ethereum?

cryptoportfolio (59)in #stellar • 4 years ago Did you know that Stellar Lumens is also a platform, where you can issue tokens? Can Stellar become a threat to the giant in this space, Ethereum? To be honest, I was surprised to see the project, Irene Energy, adopting Stellar as the main blockchain, but later I found out about the existence of other projects on this platform. And they look quite professional.

• Smartlands project, the platform for ICOs from real-world companies. It is valued at $6.4mln

• SureRemit, an ecosystem for global non-cash remittances. Valued at $6.4mln

• Mobius, the protocol for connecting consumer apps and oracles with blockchain. It’s valued at $38.9mln

What are the main advantages of Stellar as a platform for tokens?

• Quick settlement. 3-5 seconds for a token holder to send the token to someone else

• Cheap transactions (you pay base fee of 100 stroops and base reserve of 0.5 XLM)

• Built in exchange with any other token, asset or currency in the network.

• Optionally control of who can hold your token

• Ability to do voting, dividends or awards all in the same network

• Unify how exchanges and others can deal with your token. If an exchange supports Stellar then it can easily list all other tokens issued on Stellar

Is it enough to become another big token issuer? I doubt. But I can see that in the future everything can change. Also, if you got interested in issuing your token, I will leave a link here (https://www.stellar.org/blog/tokens-on-stellar/) 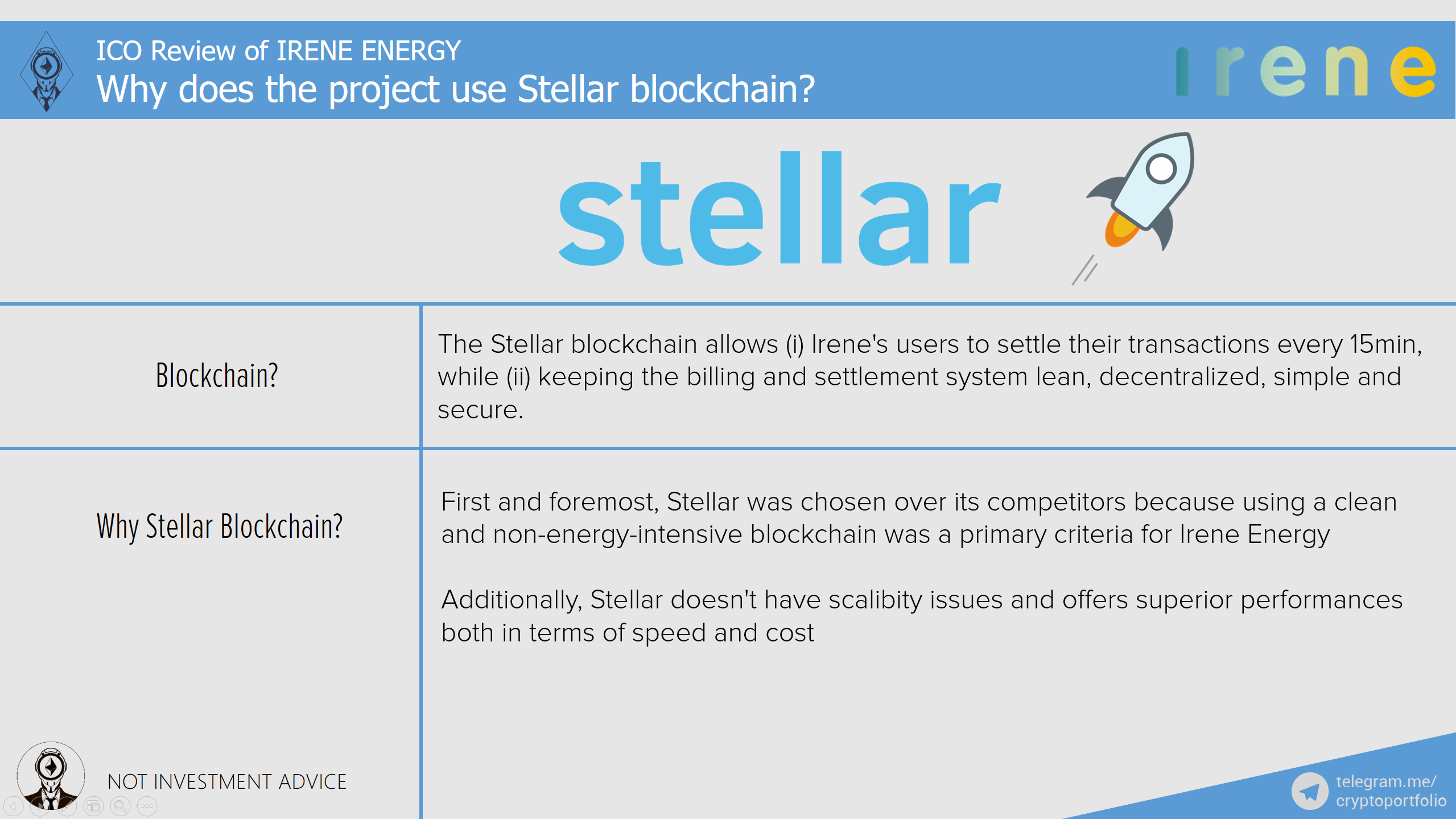 We reviewed the advantages of Stellar as a platform. Now let’s take a look at why Irene made a decision to issue on Stellar and not on Ethereum.

The Stellar blockchain allows (i) Irene's users to settle their transactions every 15min, while (ii) keeping the billing and settlement system lean, decentralized, simple and secure.

Stellar was chosen over its competitors because using a clean and non-energy-intensive blockchain was a primary criteria for Irene Energy.

Additionally, Stellar doesn't have scalability issues and offers superior performances both in terms of speed and cost. The main problems of the industry are:

• No ability to choose producers of electricity

• Lack of green energy in the world

The solution is Irene Energy.

• Irene is a personal energy supplier built on Stellar, which lets you individually choose your renewable energy producers 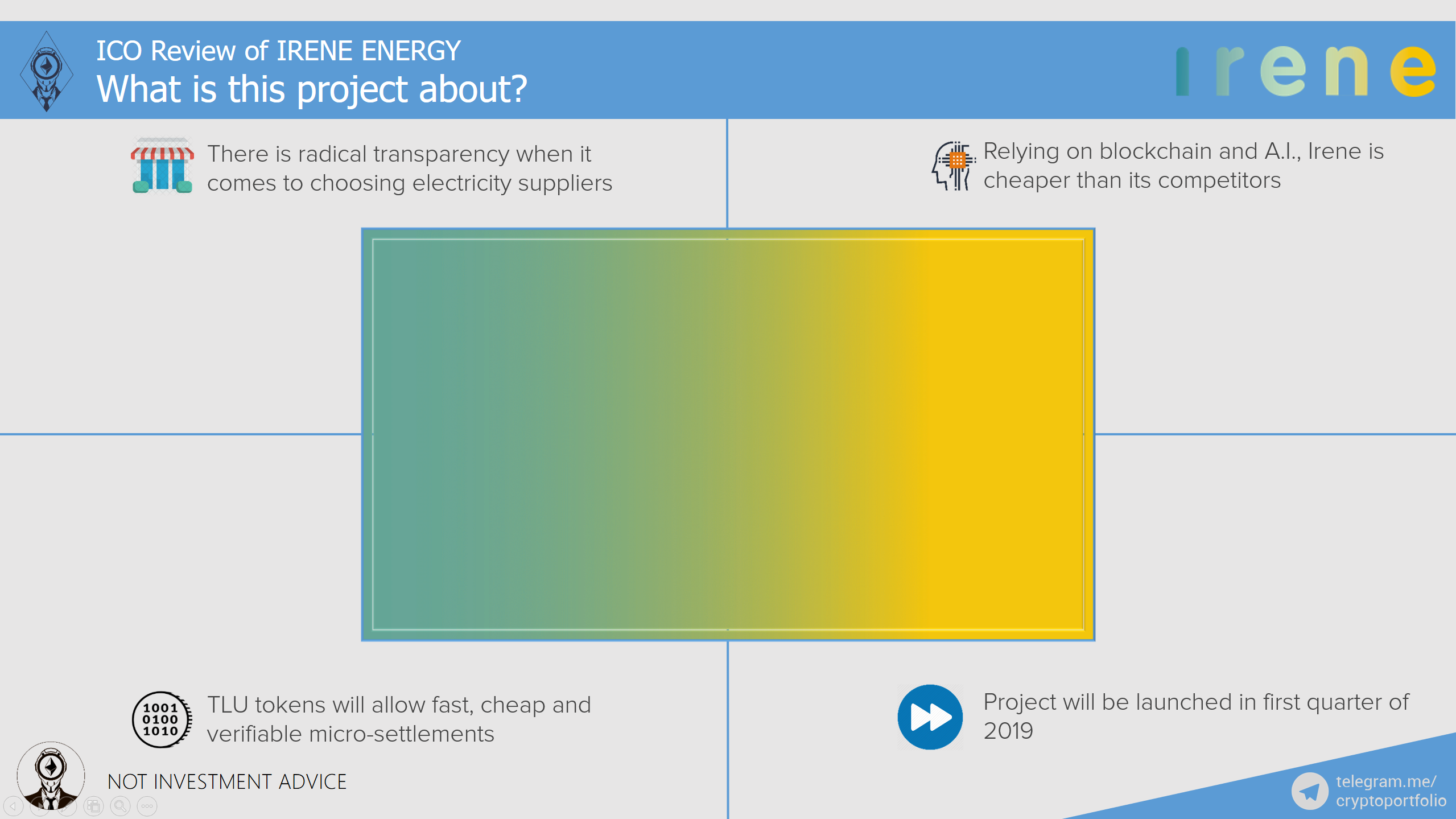 • There is radical transparency when it comes to choosing electricity suppliers

• Relying on blockchain and A.I., Irene is cheaper than its competitors

• Project will be launched in first quarter of 2019 • If consumers don’t want to know about “tokens”, everything will look like there are no tokens

• To join the green revolution, people simply need a smart meter. Everything else will be done by Irene

• PRESALE 12th of March and SALE 7th of May and December

For future viewers: price of bitcoin at the moment of posting is 9772.30USD

How about coins that matters, like Stellar in that case?