The Curious Case of McArthur Wheeler

On the day of April 19,1995 the city of Pittsburgh was the setting for one of the most bizarre and ridiculous crimes of all time. A man robbed two consecutive banks in broad daylight. He did not wear a mask or hide his face. Brandishing a gun he pointed it at tellers in both banks demanding money. Security video surveillance caught him in the act for both robberies. Police in Pittsburgh put up the criminal's picture on the local tv news later that night and they received tips immediately. This lead them to the door of McArthur Wheeler, the incredulous criminal who committed the robberies. When police arrested him the story goes that instead of claiming he was innocent, Wheeler said, "But I wore the juice."

Later on during the interrogation authorities found out what McArthur meant. Evidently, Wheeler told the police that he had rubbed his face with lemon juice to make it invisible to security cameras. In response to this statement he was checked for drug or alcohol intoxication. He was negative. Upon further inquiry the investigators reached the conclusion that Wheeler was not crazy, but just incredibly wrong. 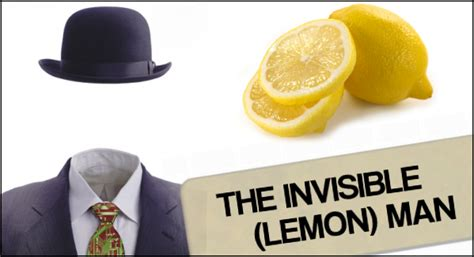 Wheeler based his idea that lemon juice could be used as an "invisible ink" and he incorrectly assumed that the juice could make his face invisible to the security camera. He claimed that he tested this out by putting the juice on his face and taking a self picture. He said there was no face on the picture and so he decided to visit the banks. Later on Wheeler told people that the lemon juice had actually made the robberies more difficult as the juice stun his eyes and he was unable to see during the crimes.

Wheeler went on to jail and eventually his story made it into legend. The basis of his story went on to form the basis for what has been called the Dunning-Kruger effect (DK effect). The DK effect is a form of cognitive bias where people with low ability or skill level suffer from the delusion of their superior cognitive ability or skill level. In 1999, Justin Kruger and David Dunning identified this effect in the case of Wheeler's incompetent understanding of invisible ink. This work earned them an Ig Nobel Prize in 2000 in psychology, this award is a satirical prize that is given to work that at first makes us laugh but then makes us think. The case that Kruger and Dunning present was also followed up with further work by others and has become a fixture in the popular zeitgeist of society. No one is spared from the DK effect. There is no cure and there is no vaccine. Only humility and recognition of how vast and complex the real world is can offer a hope in not falling prey to this self delusion. So the next time you meet someone who acknowledges little expertise in a subject, but claims authority at the same time, please remember the DK effect. And save yourself the trouble, as people who suffer this delusion will not be convinced by evidence or reason. They need psychiatric counseling and cognitive behavioral therapy to overcome their illusion state. Your efforts with these people go in vain, especially here on a platform like steemit. Sadly, you cannot offer them the intervention that their psyche, ego, superego, and id require. So ask yourself, "is this person worth my time?"

Interesting one @rsc227
never heard of this disorder, though if his idea of becoming invisible to cameras worked that would be a different story than....
Cheers