How the Cavity Magnetron works: The vacuum tube that powers microwave ovens and radar

One of the last vacuum tubes used in consumer products nowadays is the cavity magnetron. Virtually every kitchen in the US will have a big magnetron capable of outputting several hundred watts of 2.4 GHz microwave radiation inside their microwave oven.

I previously discussed the basic Hull magnetron, a simple way to produce high frequency microwaves. The cavity magnetron is the next step, and was invented about twenty years after the original Hull design. This post will be a high-level explanation of the cavity magnetron. 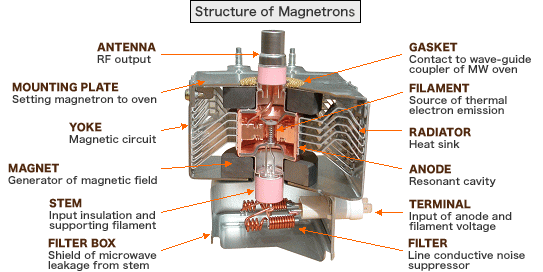 Before we begin, make sure you are familiar with vacuum tube rectifiers and Hull magnetrons. If you don't want to read the linked posts, here are some brief summaries:

Vacuum Tube Rectifier Summary:
A metal filament is heated up until it ejects electron via thermionic emission. These electrons cross a vacuum tube to a conductive anode, completing the current and allowing current to flow. Because electrons are negatively charged, current can only cross the tube when the filament is connected to the negative terminal of a power supply, causing the rectifier to act like a diode.

Hull Magnetron Summary:
A vacuum tube rectifier is constructed with the anode being a hollow cylinder and the cathode/filament being a thin cylinder going through the anode. A magnetic field is applied such that the field lines are parallel to the anode/cathode. At a certain cut-off field value, electrons emitted from the filament will sometimes curve in a complete circle due to the magnetic Lorentz force, resulting in emissions of microwaves in the form of cyclotron radiation. This is somewhat inefficient.

For more detailed (and hopefully easier to understand) explanations, see my previous posts (linked above).

Okay, with that out of the way, onto the cavity magnetron!

Actually, I lied just a bit. Before we discuss the cavity magnetron we need to cover something called an LC oscillator, a basic circuit which all electronics enthuisiasts will have already seen. The ideal LC oscillator is a capacitor connected to an inductor as shown above with no resistance. A capacitor (can be made with parallel plates) stores energy in an electric field, while an inductor (can be made with a coil of wire) stores energy in a magnetic field. To greatly simplify, the result is that connecting a charged capacitor to an uncharged inductor results in an endless oscillation of energy between the two devices (resistance and other factors ignored - in reality this oscillation dies quickly if the energy is not resupplied). In an ideal LC oscillator, this frequency can be easily calculated and depends on only the capacitance and inductance values of the capacitor and inductor, respectively.

Radio waves and microwaves are simply electromagnetic radiation. Create an oscillating electromagnetic field and you'll produce some of them. As such, perhaps the LC oscillator will see use in the cavity magnetron...

Now onto the magnetron ... for real this time:

The simplified cavity magnetron (which is not really simple at all) is a Hull magnetron with a special anode full of specially sized cutout chambers, called resonating cavities. The design is shown below: 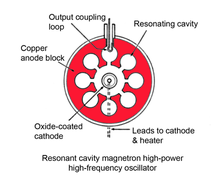 Electrons curve outward from the filament in the sub-cutoff magnetic field (usually produced by two permanent ring magnets) and strike the anode, depositing an electrons worth of negative charge.

Each of the resonant cavities forms a sort of LC oscillator circuit: The curved surface acts as a single-loop "inductor" and the cutout connecting the cavities to the main chamber serve as a parallel-plate capacitor. The result is that, when electrons deposit charge on the ends of the cavities, electrical oscillations are initiated in the resonant cavities. The result of these oscillations is, of course, radio frequency electromagnetic waves! What frequency is produced depends of the inductance/capacitance of the LC oscillators, which in turn depends on the physical dimensions of the cavities.

The electrons impacting the cavity-ridden anode serve to "drive" the LC oscillations and electromagnetic waves. The cavity magnetron was used in early radar devices as one of the only sources of high frequency microwaves that could output high power. This also makes it extremely useful in cooking your food.

Each and every microwave oven in existence contains a large cavity magnetron. They look like this: 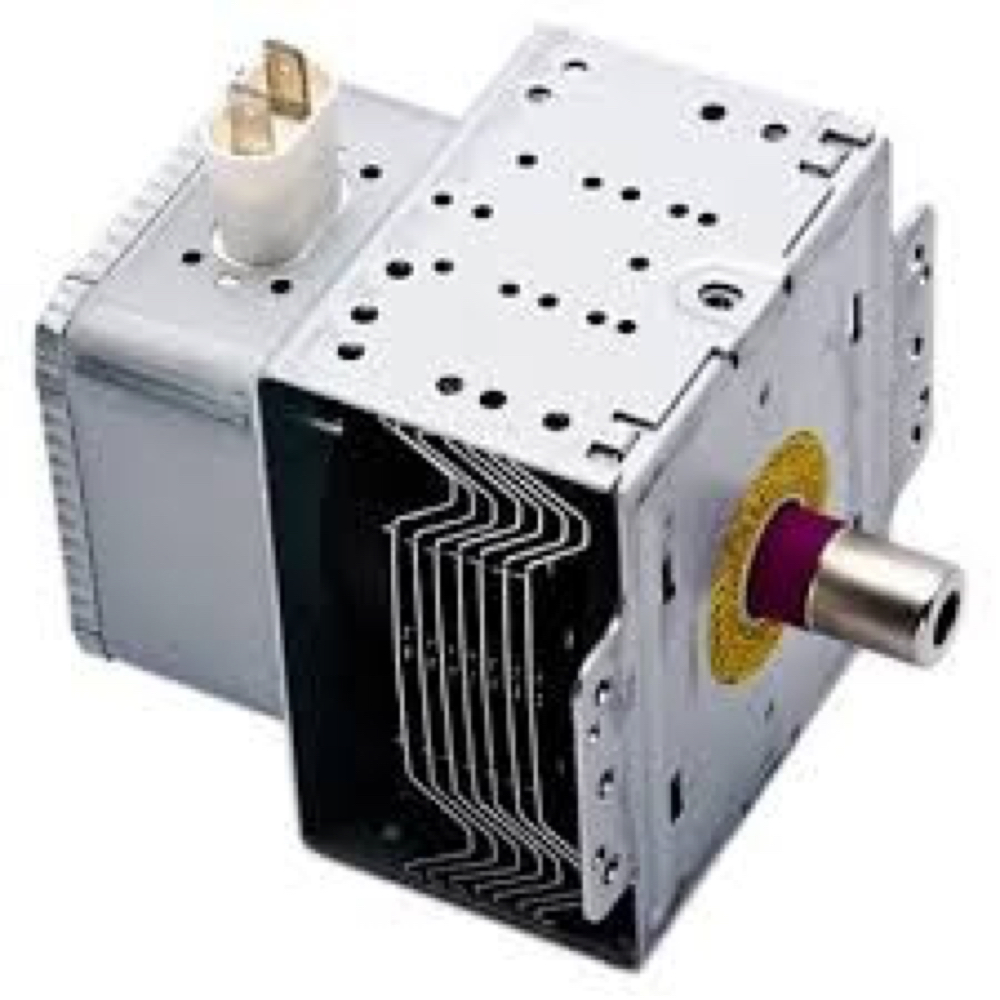 In the case of the microwave oven, the magnetron is built to deliver several hundred watts of 2.4 GHz microwaves directly to your food. The waves are emitted from the front of the magnetron and into a waveguide before entering the microwave chamber. For perspective, 2.4 GHz is the same frequency as some WiFi, Bluetooth, and many cordless phones, which is why using some crappy microwave ovens can jam your internet if the oven is leaking RF.

A tiny note: 2.4 GHz is pretty high frequency for radio waves, but it pales compared to some more common electromagnetic waves. Light, for example, is made up of electromagnetic waves with frequencies many magnitudes higher than microwaves. XRays, magnitudes more. Since individual photon energy is proportional to frequency, and the vastly more energetic visible light isn't ionizing, microwaves aren't ionizing, and therefore can't damage your DNA and cause cancer. So don't worry about your router giving you skin cancer.

This was a somewhat more hand-wavy explanation than my previous vacuum tube examples due to the complexity of the cavity magnetron, so I apologize in advance if I missed anything. Hopefully you learned something from this! If you have any questions or spotted something incorrect in the post, don't hesitate to let me know below.

I hope you now appreciate what is effectively the last remaining consumer vacuum tube (along with the dying CRT TV)! I think this will be my last vacuum tube explanation post for a bit, but that could be totally wrong if I get inspired. I hope you enjoyed this post!

Well done! This post has received a 5.00 % upvote from @litasio thanks to: @steemstem-bot. Whoop!