When it comes to deep sea creatures, a jelly fish really isn't top up my list. Infact, I am totally terrified of them. The fact that some species can give stings that are almost deadly; just makes them seem like monsters to me.

Well, i recently came across a very amazing specie of jelly fish. What makes this specie so fascinating is the fact that they are biologically immortal.It’s one thing to survive in harsh environments, but quite another to hit the reset button when faced with an imminent threat.It's kind of like a butterfly that instead of dying changes back to a caterpillar, or an aged chicken turning back into an egg.

Immortality still sounds like science fiction to a lot of people(including me) but there's a specie of jellyfish that has been exhibiting this traits since the 1880's.

Introducing to you the immortal jellyfish. 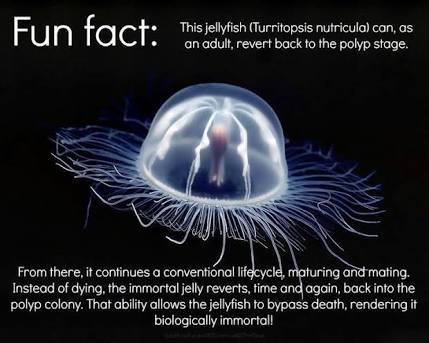 This specie is biologically immortal and was discovered by scientists in the year 1883, in the Mediterranean sea.

The creature whose scientific name is turritopsis dohrnii has a diameter of 4.5mm and it's also about as tall as that. It has a bright red stomach which is visible in the middle of its transparent bell. The young ones are about 1mm and has only 8-9 tentacles. The adults one has about 80-90 tentacles. They begin life as tiny larvae called planula(A planula is a flattened, ciliated and bilaterally symmetric larvae that forms from fertilized eggs). When it settles down at the bottom of the sea, it facilities a colony of polyps that are attached to the sea floor. The jellyfish(medusae) then bud off these polyps and continue life. The turritopsis dohrnii is currently spread all over the world through trans-Arctic migrations. They are believed to be originally from the Pacific. They are found in temperature to tropical regions.Thier invasion currently cause no concern because they are tiny and harmless. They have silently invaded most parts of the world.

The eggs develop in the gonads of the female which are located in the stomach.Mature eggs are spawned and then fertilized by sperm which the male squirts out into the sea. The eggs then develops into planula larvae and settles on the sea floor where they develop into polyp colonies. These bud new jellyfish that are released into the sea. They are usually around 1mm in size and they feed on plankton. They become sexually mature in a few weeks depending on the ocean temperature; but are generally able to survive between 14°c and 25°c. 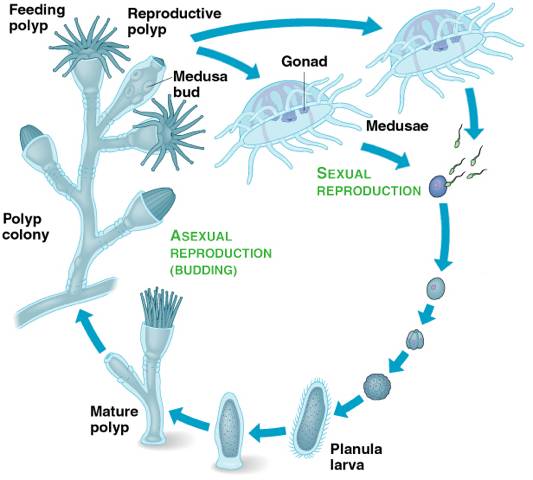 Now to the fascinating part, the turritopsis dohrnii has the ability to reverse its biotic cycle.

Careful laboratory experiments have revealed that all stages of the medusae, from newly released to fully mature individuals, can transform back into polyps under the conditions of starvation, sudden temperature change, reduction of salinity and artifical damage of the bell with forceps or scissors.
Source

The turritopsis dohrnii begins the process by deteriorating its mesoglea, tentacles and bell. Basically, it simultaneously shrinks all parts of its body and transforms to its polyp stage. The younger ones first turn into a cyst like stage before transforming to a polyp. The mature ones go directly from the maturity stage to the polyp stage. When they get to this stage, they begin their life once again without suffering from environmental changes or injury. This ability is unique to the turritopsis dohrnii as they are the only creatures in existence that can do this.

The cellular mechanism behind it—a rare process known as transdifferentiation—is of particular interest to scientists for it's potential applications in medicine. By undergoing transdifferentiation, an adult cell, one that is specialized for a particular tissue, can become an entirely different type of specialized cell. It’s an efficient way of cell recycling and an important area of study in stem cell research that could help scientists replace cells that have been damaged by disease.
Source

The turritopsis dohrnii however do not live forever because they either get eaten by a predator in the wild, or are lavished by sudden disease.

Their transformation hasn't been monitored in the wild because it is quite difficult to identify specific species in the wild. Only a few turritopsis dohrnii has been successfully groomed in the lab because it is quite difficult to sustain the most suitable environment for it to flourish in. However, the scientist who was able to successfully sustain some
turritopsis dohrnii say they perform their biological immortality traits over and over again. It's a continuous process that they can keep doing till eternity under normal circumstances.

Some marine biologist actually argue that immortality isn't the right word to be used. It should be more like natural cloning since the jellyfish is rebirthed with its own identical genes and doesn't actually live forever in the same body.

The Turritopsis dohrnii's cell development method of transdifferentiation has inspired researchers to find a way to make stem cells using this process for renewing damaged or dead tissue in humans.

All image Sources are stated in the text!