All the colors of biotechnology 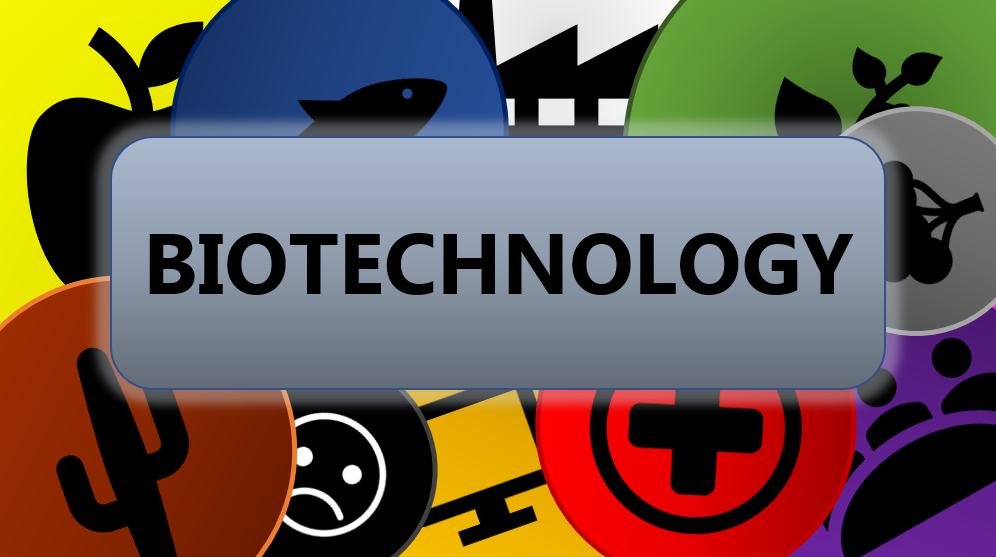 Sit back, relax and read on!

Well, biotechnology is the use of living organisms to make some kind of product. In the broader sense it is any technological application that involves usage of living systems. Let me give you some examples for better understanding. One such example is the usage of yeast to make beer, wine or bread. Or the usage of microorganism with the aim to create antibiotics.

Even though biotechnology as branch of applied life sciences is relatively new, it is also one of the oldest branches of science. Ancient Egyptians or Babylonians did brew beer circa 6000 B.C. So, now that you know what biotechnology is, let me explain why the colours. Well, different branches or divisions of biotechnology are most commonly referred to using colours. That’s it! :D

There are basically ten divisions, but sometimes it is hard to define their borders. The most prominent ones include white, red and green biotechnology, but the others are very interesting as well. Now I will try to explain them one by one, so you can get better perspective on the matter. If you are not interested in all of them I also created this table, so you can jump to the colours you are interested in. 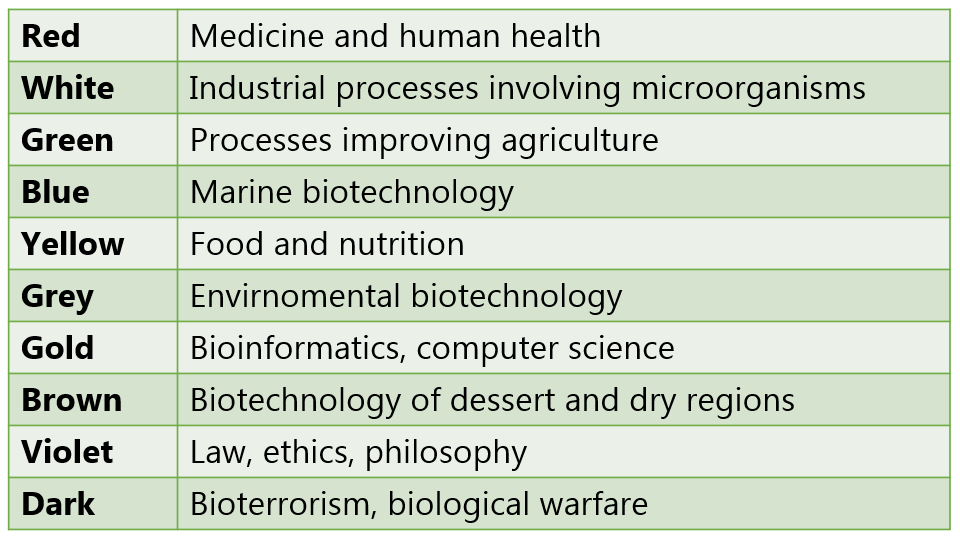 Red biotechnology specializes in medicine and human health. This includes production of new antibiotics, vaccines, antibodies, medicaments, as well as genetic engineering for disease treatment. You can just imagine why this particular part of biotechnology is extremely important for our well being and also quite profitable.

Green biotechnology focuses on technologies that have positive impact on agriculture. This includes creation of new crops using genetic or traditional approaches as well as creation of new biofertilizers or biopesticides. This branch of biotechnology gives hope that one day food will be a commodity everyone can have. So called “golden rice“, containing genes of daffodil for the production of β-carotene – precursor of vitamin A, is a good example here. Over 230 millions people in Asian population suffer night blindness due to deficiency of vitamin A. Golden rice could help fight this problem and increase the quality of their lives.

Blue biotechnology focuses on marine organisms. Basically, it involves use of marine organisms or their products for creation of new medicaments, cosmetic products, food or food supplements. Considering that the sea presents the greatest biodiversity, there is potentially a huge range of sectors to benefit from the use of this kind of biotechnology.

Yellow biotechnology encompasses creation of new ways to improve certain food products or to obtain more nutrition-rich products. It also tries to eliminate allergens and other components from food that are the root of various intolerances. Well, it is also close relative of green biotechnology as they have many things in common.

Grey biotechnology tries to use living organisms to improve the environment we live in. This includes bioremediation that uses microorganism or even plants to clean up the environment from certain pollutants. It also tries to maintain biodiversity.

Gold biotechnology deals in bioinformatics, computers science, chip technology as well as nanobiotechnology. This includes search for primers, sequencing of peptides, search for alternations in DNA.

Brown biotechnology centres around treatment of desert-like soils drawing from species that are highly resistant to dry and saline soils. This involves mainly places such as Africa. In this case the use of GMO technology could make a beneficial impact using improved seeds to grow high-value commercial crops in low-rainfall areas. So yeah, basically, something dry resistant with sufficient crop yield. This branch is quite closely related to grey and green biotechnology.

Violet biotechnology is quite special. It actually centres upon the study of the legal aspects that surround this science. Biotechnology is something quite controversial and also potentially very dangerous. Therefore, it gives rise to heated emotions in almost anyone. Thus, the need for regulation and formation of a platform for discussion was necessary. This also includes biosecurity and moral impact of certain technologies (gene therapy, animal testing, etc.).

Dark biotechnology, yeah, every herd has its black sheep. Dark biotechnology is not really something that anyone from science community takes part in, well, at least not in the bad part. It includes production of biological warfare and bioterrorism. It investigates pathogenic, virulent and resistant microorganisms, to convert them into biological weapons or counteract their harmful effects.

Sooo, I do hope you learned something new today. I really like the fact that biotechnology is divided using colours, because it makes it easier to remember the whole thing. There are different parts of research that could be classified as separate division of biotechnology for sure and in the future they maybe will. Luckily for us, there are still some colours left.. :D

Have a great day guys!

All the pictures were created by me. Haha :D Well, but try to imagine this cowctopus.. :D
And am glad that you like the pictures! :)

...maybe I will need your services (several circles with something). And it will be paid in Steem/SBD. Down with the fiat :)

Sure! Even though I am really an amateur in this, I will gladly try to help anytime. :)

I've heard of a lot of these fields, but never seen then put to colors! Is this a commonly known convention or your creation? Either way it's pretty awesome :)