Generation of Electricity from Human Footsteps: Taking a closer look

Greetings Steemians. It’s good to have you here again.

Electricity is very vital in human survival and in fact it has been described as one of the most important inventions achieved through science. However, there are dangers such as global pollution inherent in the use of the traditional sources for electricity. As a result of this, scientists have turned to alternative energy sources such as solar energy, wind energy, biomass energy, geothermal energy, hydropower etc. as an answer to the problems associated with the use of fossil fuels. Energy generated from foot-steps is another green energy that has been proposed to be used mostly in crowded environment. Let your imagination take a trip with me as I discuss this technology. The truth is stranger than fiction 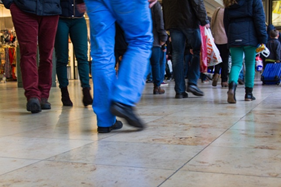 The idea is quite simple and has been demonstrated by many researchers and companies using various techniques. Think of it as the energy derived from human while walking or running. The idea is to harness the kinetic energy produced by human movement and convert it to electricity. You could also think of it as energy generated by converting the force transferred to the ground by footsteps as a result of the weight of human body into electricity since kinetic energy generates force as shown below.


K.E=1/2 mv2
F=m.a
And by manipulation of parameters K.E=1/2 F.at2
Where K.E is kinetic energy, F= Force, m= mass, v=velocity, a = acceleration and t = time
This conversion is achieved through electromagnetic induction, piezoelectric effect and by using the kinetic energy generated to drive a simple electric generator

This article will be incomplete without mentioning the amazing works that has been done in the area of generating electricity from the human movement.

Each pedestrian generates an average of 5 watts per footstep at 12-48 volts DC, enough to run an LED street lamp for 30 seconds.

I was amazed when I saw the videos of these demonstrations on Youtube. You can also see one of the videos below.

A pinion is a small spur (circular) gear while the rack is a linear gear. This mechanism is commonly used in steering system. The rack and pinion mechanism is used to convert rotational motion into translational motion and vice versa.

In this case, the rack and pinion gears are hidden under the speed breaker to transform translational motion into rotary motion which is then used to drive an electric dynamo to generate electricity. The rack is pushed down whenever a vehicle steps on the speed breaker. The rack in turn rotates the pinion in one direction. A sprocket drive and chain is used to amplify the rotational motion and a flywheel is used to regulate the motion by storing the kinetic energy which is then used to drive the electric dynamo to produce electricity.

A major disadvantage of this arrangement is that some components may get destroyed when the vehicle is too heavy.
I’m sure you must be wondering about the magnitude of the voltage generated using this technique. The researchers who demonstrated this recorded that the voltage varied directly with the speed and weight of the moving vehicle. For example, a 400kg load using this technique generated about 273.24 watts.

As stated earlier, you would have noticed that the idea in all these systems is to convert kinetic energy to electrical energy. This has been achieved in turbines but the goal is to eliminate the pollution associated during this conversion and that why human footsteps were considered. You will agree with me that anything/animal that can generate kinetic energy without pollution can also do the job.

This concept can be used in crowded environments such as churches, mosques, clubs, cinema theaters, airports, universities, stadiums etc. For instance, record has it that over a million people gather in Mecca every year for the Islamic pilgrimage and in most cases, the people march from one place to another when executing their worship activities. Imagine the amount of energy that would be generated from their footsteps. Obviously, it will be massive. 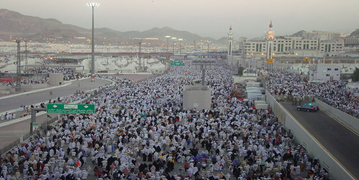 Picture by Aiman titi - wikicommon CC BY- SA 3.0
The way to Jamarat Bridge

In this article, we have seen kinetic energy as the basis upon which the generation of power from human footsteps thrives. We have also seen the various systems that have been demonstrated in this area and how that the Pavegen tiles is the best shot so far.

The generation of electricity from footstep is eco-friendly, requires no fuel and utilizes energy that would have wasted from human locomotion. It is a fantastic development and a seeming uncharted territory in non- conventional energy sources but its present limitations seem to outweigh the benefits. However, one cannot completely overrule the possibility of a better system in the years to come

Hopefully this article has provided you with the necessary information to understand and catch up with the happenings in power generation through human locomotion. Be sure to leave your comments below. Thank you for reading. See you next time.

So if i do 10k footsteps a day it would generate 10 watt-hours of electricity. Half the charge of laptop.

Very cool. I had no idea this kind of technology was already being used in certain places.

Electricity from footsteps.. Quite amazing if you ask me. Piezoelectric effect too. I think we did something like this in school but i guess i didn't understand what it meant then.

Yeah. It is really amazing. Thanks for reading

Finding alternatives sources of electricity and utilizing them will go a long way in making the earth safe from harm. Piezoelectricity is a good discovery. I remember reading that piezoelectricity was used to power so millitary gadgets. They did this by placing piezolectric transducers under the boots of the solders. Although, it provided some discomfort and the power derived was not substantial.

Reverse piezoelectricity is perhaps more common. For instance, in the generation of ultrasonic waves used in medicine (ultrasound scan) and even engineering like for non-destructive testing.

Thanks for the additional information. I am glad you found it informative

Wow is the word i can use in qualifying this educating post.. What a way to learn another way of generating electricity.. Good job done bro!

Wow... If this is the future then I say we are in for the best. Countries with large amount of tourist, malls, country square and many more can easily generate electricity from the amount of people who visits. This is impressive

Yeah. Electricity can be easily generated even without the people knowing. Thanks for reading

He wrote about a shoe that has been developed for the purpose of getting energy out of walking a couple of days ago (maybe was it yesterday) :)

I have learnt a lot today, we can produce electricity from footsteps? Wow! Learning never stops. Thanks for this eye opener.

You are welcome. I am glad you found it informative

I'm still amazed at how much researchers are doing these days to find green sources of energy. I think the present challenges are just normal for every new technology, eventually, they will find a way to overcome these obstacles. The times that follow will surely be interesting.

I've been thoroughly educated, thank you for the enlightenment.

Yeah, we can say with certitude that the future of green energy is bright.
I am glad you found it educative

I have learnt a lot today, we can produce electricity from footsteps? Wow! Learning never stops. Thanks for this eye opener.

I bet you can do it if you it your mind to it!

This is really amazing, the first time i'm learning about piezoelectricity....
Well, just thinking, in an effort to solve the limitations of this method of generating electricity, what if a device that is able to impact a very high pressure when placed on the piezoelectric tiles is invented, the device could be made to generate per second, a pressure equivalent to a billion individuals walking.., that would act to solve the problem of low energy, right?

Yeah. Several works are ongoing to create a better system. Thanks for taking time to read through

Do these require any additional power output by the human or car when compared to walking/driving on a normal surface?

No extra output needed. You just need to walk as you normally would

But the power's got to come from somewhere, right? I can believe that maybe if you replace a cement floor with a solid state tech, that the force exerted may be the same. What I get hung up on is when rubber floors replace tiles or when movement causing induction comes into play.

My suspicion is that if you look at the calories burned by a person walking over 100m of a normal hallway and compare that to the same walking through the a hallway paved with the later methods, there's going to be more calories burned. This raises interesting questions about the efficiency of output and, since humans are terrible generators, if there's eventually a net carbon cost when you trace the extra calories back to food production. Then again, that assumes they're going to not be eating those calories otherwise and it certainly is better than the gym (in terms of eco impact).

Hello @effofex, why do think humans will expend more energy walking over the piezo-electric floor?

Like I said, the energy has to come from somewhere. It's not necessarily the case that we expend more energy, but it's certainly plausible (especially when you start substituting in materials with a different elasticity or parts that need moving).

I'm not a mechanical engineer, but I'm decently familiar with thermodynamics and the idea that there aint no such thing as a free lunch. I'm more experienced with alternative energy systems, to really evaluate them, you always have to do a rigorous energy balance. So, what I'm really getting at here isn't that I am certain that we expend more energy in walking, but that someone needs to do the math for that balance. It's often the case (sadly) that that analysis reveals that the power generation just shifts the environmental burden upstream.