In central dogma theory 1, we explained how the deoxy ribonucleic acid occupies the central role in the transfer of genetic information within the biological system. For a molecule to effectively occupy this position, it must have some special characteristics which include being cosmopolitan in all cells, being able to store biologically useful information without changing much, ability to code and express information for the control of functions of living cells, inherent capacity to show modifications according to differences in organisms and most importantly, ability to make a precise copy of itself and then pass over the copies to successive cells or generations. In addition, such molecule must be able to undergo mutation as well as recombination and both must be stable as well as inheritable.

The most important of all the attributes that make the DNA suitable as the main genetic material in living organisms is the ability to make copies of itself, that is, replication. Growth and reproduction cannot be possible without cell division, and when cells divide, the daughter cells need copies of their own genetic materials. It becomes pertinent for the DNA in the parent cell to double up in order to share into two daughter cells. Replication is therefore an important part of the cell cycle prior to the actual cell division.

How does the DNA replicate?

Basically, there are several steps in the process of DNA replication. Each step is an important process in preserving the integrity of the DNA itself. 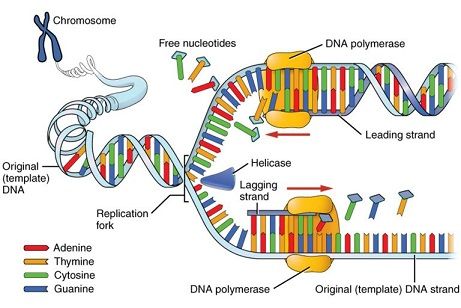 Immediately after unwinding of the DNA strands is binding of a short ribonucleic acid strand known as primer to the leading DNA strand. The primers are synthesize by an enzyme known as the DNA primase enzyme. The leading strand is quite easy to replicate and it is continuous unlike the lagging strand which is replicated in discountinous fragment also known as okazaki fragments. So the primer binds to the leading strand at the 3' end while it binds to the lagging strand at multiple sites. 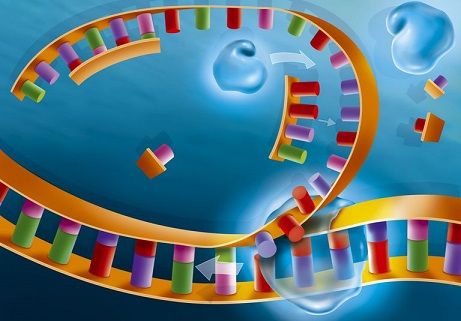 Chains of bases are created by an enzyme known as DNA polymerase which binds to the DNA strand at the site of the primer and adds base pairs complementary to the DNA strand in a process known as elongation. There are about five different types of DNA polymerase with some involving in binding to DNA strand at the site of the primer while others are involved in a process of proofreading the newly synthesized chains fro errors and necessary repairs. Elongation of the leading strand is continuous while the lagging strands are synthesized in fragments which are later joined by another enzyme known as DNA ligase. At the end of the elongation process, all RNA primers are removed from the original DNA strands by an enzyme known as exonuclease while another exonuclease replaces the primers with relevant purine or pyrimidine bases. A third type of exonuclease proofreads the newly formed DNA strands and makes the necessary corrections. The lagging strand synthesized in discontinuous fragments are joined to form a continuous one by DNA ligase. Telomeraze, a special type of DNA polymerase synthesizes telomeres at the end of each newly formed DNA strands which act as protective cap at each end to prevent them from fusing. Thereafter, the newly synthesized strands coils around their respective parent strands to give a two double helix DNA consisting of one old strand and one new one. This method of replication of DNA is called 'semi-conservative replication method'.

Replication is an important process in the central dogma theory through which the DNA produces a carbon copy of itself. It is an important process before cell division, the latter being very necessary for growth and reproduction. The processes involved include formation of replication fork, binding of primers, elongation of chains and termination of chains after which the each newly synthesized strand coils in an helical manner to their respective parent strands in a process known as semi-conservative replication.

Till our next post, your comments, contributions and upvotes are appreciated.

So what came first: The DNA or the parts it codes for, which is needed to create DNA, store it and express it into living things ? :)

Interesting question - look up RNA world hypothesis. In short it postulates that the most likely first biomolecule to exist and auto replicate was in fact RNA/Ribozymes as it is able to independently replicate, catalyse simple chemical reactions and interact with its environment under certain forms.

This is what we call autocatalytic RNA or a Ribozyme. This idea has even been tested in the lab, and they have been able to guide the evolution of autocatalytic RNA to make it more and more prone to auto replication - eventually it just starts evolving itself and producing new features through mutation which may or may not favour survival.

Check out this article from Science for more information: http://science.sciencemag.org/content/323/5920/1436.full

I´ve read into this earlier and i think it falls short in the same way. RNA would never self assembly and the nucleotides is made by living organisms so it had nothing to be build upon. Ribosomal RNA would never self assembly its to complex and it would have no environment to live in, he earth was hot as fuck! No cell membrane or even lipids which could make up membranes.

It would take a lot for life to kick start and nothing in science got a clue of how it started, i find it amazing that life exists against all odds, or does it :) ?

Good point, but I disagree; I actually adhere to one of two theories - panspermia or ribozymic origins. However, even panspermia does not in fact answer our question of origin.
I believe that life is just an emergent property of the universe - possibly much more common than we may think. There have been some experiments done on ribozymes but I failed to link to any serious articles previously here are some to get you started:
https://www.ncbi.nlm.nih.gov/pubmed/7672511
https://www.nature.com/articles/srep11405
The fact that the Earth was incredibly hot is not up for contention one does have to admit though that if life eventually came to live on Earth these conditions must have changed. I believe that after significant cooling the Earth became apt for the 'creation' of life.

I agree that life could be a integral part of the universe and i think that it could come down to thermodynamics or just entropy.
Since the generating of heat by an elephant would be thermodynamic favorable even with the lower entropy(initialy) life might simply condensate in to existence with the right conditions. Life makes the progress of going from big bang to a cold dark universe faster, so it seems logical that no other explanation is needed.
And since humans make this progress even faster with machines etc we could argue that our existence and all of evolution, could be blamed on the laws on thermodynamics.

Read about it a while ago and i like the fundamental simplicity, and have been reading about the beginning of life, all my life, it even made me chose bio engineering as a career.

I haven't seen any models explaining how the bio molecules needed for RNA was available and how RNA could be its own enzymes and have access to material for next generation RNA. Or how the information in the first RNA made scenes in context to molecular life.

There is still much to look for and the statistics still look bad right :)

The pre-biotic soup had the necessary building blocks. Why is it that you think that RNA couldn't self replicate?

Lack of RNA nucleotides obviously still no evidence or theory can explain the abundance needed, pools of it for millions of years to suport random self assembly into RNA of usefull composition followed by self replication for million of years with no membrane or safe environment on a very hot earth, hardly possible of carrying life as we know it.

But its moving forward, some even propose pre RNA molecules evolving into RNA with some catalytic effects as temperatures droped etc.

I gladly follow the progress, but i am naturally skeptic to evolution and big bang, it´s being taken for granted by many but we should not forget it is still theories that carries a lot of flaws :)

interesting debate you got going on guys. My research sense has been further triggered. I will look deeply into both sides of the argument and see if I can come up with something more evidence based.

The DNA came first and occupies the central portion. It is a precursor to all other biomolecules associated with information transfer, that is RNA and protein. The messages in DNA are first transcribed into RNA and then translated into proteins.

Thanks for reading through

Yeah true that it´s central and a precursor in a scene. But DNA would never self assembly, especially into something of useful information, it could not be stored without a cell membrane and it could not be transcribed or replicated without enzymes.

Its like having code with no computer, it simply WILL NOT compute alone.

Biomolecules of life came first before the evolution of the cell. Perhaps I should do something on the origin of cells itself

Congratulations @hadji, this post is the second most rewarded post (based on pending payouts) in the last 12 hours written by a Dust account holder (accounts that hold between 0 and 0.01 Mega Vests). The total number of posts by Dust account holders during this period was 7397 and the total pending payments to posts in this category was $1723.05. To see the full list of highest paid posts across all accounts categories, click here.

Good! You wrote on DNA and it's nice. You can try writing on RNA too, I think you'll do just great. Keep it up!

Thanks pearlumie. The central dogma is a continous series. Just watch out for my next post

Congratulations @hadji! You have completed some achievement on Steemit and have been rewarded with new badge(s) :