Type of Fertilizer And Its Usability (Organic fertilizer & Inorganic Fertilizer)

Fertilizer is a material that is added to the soil or plant canopy to complement the availability of nutrients. Fertilizer material originally only comes from animal waste or residual weathering of plants and wood charcoal, but chemical fertilizers then developed and now also become the main choice for use in agriculture, The use of chemical fertilizers growing with the invention of calcium salt deposits in Germany in 1839. 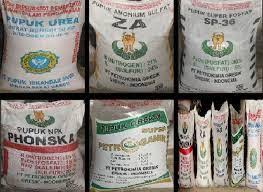 In its use, inorganic fertilizers can be released quickly (fast release) or slow (slow release). Fast release fertilizer will release the nutrients quickly so sown to the ground and can be directly utilized by the plant. Some examples are urea, ZA and KCL. This type of fertilizer will quickly run out because not only will quickly be absorbed by plants, fertilizer is also faster to evaporate and washed by water.

Some of the most preferred nutrients for inorganic fertilizers are nitrogen, phosphorus and potassium. For plants, the Nitrogen element is useful for stimulating overall growth, especially stems, branches and leaves. Nitrogen also plays a role in the formation of green leaves that are useful in the process of photosynthesis as well as in the formation of proteins, fats and various other organic compounds. Phosphorus for plants is useful in stimulating root growth especially in young plants. Phosphorus also acts as a precursor in the formation of various proteins, assimilation and respiration and accelerate the flowering and ripening of seeds and fruit. Just like the elements of nitrogen and phosphorus, for plants, the element of potassium also plays a role in the formation of proteins and carbohydrates. In addition to strengthening the plant so that leaves, flowers and fruit are not easily killed, potassium also plays a role in providing strength for plants during dealing with drought and disease.

Organic fertilizers partly or wholly derived from plants or animals that have been through the engineering process. The ingredients included in organic fertilizer are manure, compost, kascing, peat, grass aut and guano. Organic fertilizers can be either solids or liquids, which are used to supply organic materials in order to improve the physical, chemical and biological properties of the soil.

Several types of materials become an option in the manufacture of organic fertilizers such as plants that become green manure, animal waste into manure, as well as organic materials into compost.

Green manure is a fertilizer derived from weathering plants, both crop residual plants and plants commonly used as fertilizer. Some examples of which are the types of leguminous or beans and azola or aquatic plants. These types of plants become an option because it is rich in nutrients, especially nitrogen content.
source:
http://www.kebunpedia.com/threads/jenis-pupuk-dan-kegunaannya.5383/
source Hello, you received a boost courtesy of @steemdunk! Steem Dunk is an automated curation platform that is easy and free for use by everyone. Need an instant boost? Send 0.200 SBD with your full post url as the memo to @steemdunk for an upvote. Join us at https://steemdunk.xyz

Congratulations @griyatronik! You have completed some achievement on Steemit and have been rewarded with new badge(s) :