My first non-introduction post in the steem world was about bacterial predators and shortly after that, I read @valth's interesting post on venus fly traps. Thinking about predation and organisms which have developed nifty adaptations to low nutrient environments (nitrogen-poor, in this case) reminded me of another bunch of organisms which fasinate me - fungi that hunt nematode prey.

Fungi are a wide kingdom of organisms we commonly associate with decomposition of organic matter. While most people think of them as mushrooms, that's only a specialized part of one type of fungus. What we're interested in here are the hyphae, which are microscopic strands of cells produced by many (but not all) fungi. These hyphae, pictured below, spread out, sometimes enormously, and have a huge surface area, allowing the fungus to take in many nutrients. However, not all nutrients are available everywhere and nitrogen can often be in short supply. It actually takes a lot of investment to 'fix' N2 from the air into something that's bioavailable, and it certain environments that fungi like, such as dead wood, are rather low in it. Nematodes are a varied group of microscopic roundworms which are extremely common and can be found in just about any environment. They can crawl around, eating bacteria and other things, taking up nutrients wherever they can, and, like all organisms, are full of the delicious nitrogen fungi crave. Nematophagus fungi have developed the ability to hunt and eat these nitrogen-rich worms to make up for the lack of it in their environment. 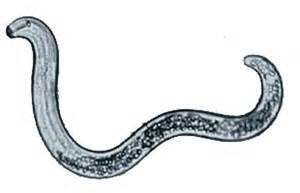 Nematophagus fungi aren't restricted to one hunting strategy or taxonomic group. Some live inside the nematodes like parasites, others lay out webs of hyphae with sticky tips, and yet others secrete compounds toxic to nematodes. But the strategy which caught my interest is when the fungi create snares to physically trap their prey. The most famous of these fungi is Arthrobotrys oligospora, which we've known about for over 150 years and which is the model organism for this behavior. These snares, formally coil-like adhesive networks are specialized hyphae which form a loop structure. When a nematode passes through the loop, the hyphae quickly swell with water, physically trapping the nematode while the fungus digests it. As additional insurance, some snare-using fungi then secrete chemicals to slow down or kill the nematode, improving their success ratio, at the cost of producing more compounds. 1

I bring up cost because it's important to remember that most adaptations take up some resource, be it energy, time, chemicals, or just the opportunity cost of doing something else. If the organism cannot get a good return on investment, that is a failed strategy, and they will not be likely to survive. Thus we see the min-maxing driving force of evolution.

As you might imagine, forming these special snares is actually pretty costly, so the fungi do something rather clever. They only build snares when they have to. First, they have to be in a nitrogen-poor environment - why go to all the trouble trapping works if when they could just soak it up. Second, there have to be nematodes in abundance in the area - no use setting a snare if there's no one to catch.

This is where it gets really cool - the second criterion means that the fungi have to be able to sense that nematodes are in the area. The last I checked, fungi don't have eyes and microscopes, so they depend on chemical signatures. We now believe that these fungi home in on a particular class of compounds, the ascarosides, which are produced specifically by many nematodes and which are strongly conserved (meaning they don't change much over the course of evolutionary time and are common throughout the the nematode's evolutionary branch). It is only when the the fungi sense these ascarosides in a nitrogen-low environment that they produce these snares.

Nematophagous fungi and nematodes are locked in a classic predator-prey dynamic where the fungi keep the nematode population in check. The limits on nematodes, in turn, puts an upper limit on the nitrogen available to the fungi, limiting their growth. Beyond that, it is believed that the fungi are also sources of nitrogen to other organisms, but only as a food source. I have not found anything that suggests nematphagus fungi act in a symbiotic relationship trading excess nitrogen for carbon, as we see with arbuscular mycorhizza.

Nematophagous fungi can and have been used to control populations of commercially destructive nematodes, such as those which form root galls and destroy crops. Beyond that, researchers are also looking at them to do things like control intestinal parasites in domestic animals.

@effofex thanks for writing about these fungi and nematodes. The nematode C. elegans has evolved a head touch response to escape these fungal snares. I thought you might be interested in this paper: https://www.ncbi.nlm.nih.gov/pmc/articles/PMC3266163/
Cheers!
ian

Super cool! Thanks for that.

Great article! To be perfectly honest, I'm not very knowledgable when it comes to this topic, but it was well-written and very informative. I took a look through you're blog and you've certainly earned my follow. I see you're part of the Geopolis community! I'm also part of it so you may have seen my articles published before. If you are interested in geological, geographical and other interesting topics, be sure to give my blog a once over. Any support is much appreciated!

Very interesting and I could care less about nematodes. It’s interesting to see how a life-form lacking familiar sensory organs can develop such a hunting strategy. Could you say the fungus is smelling The nematodes?

Wow, you should care about nematodes as they are the most abundant animal on our planet. They play a . very important part in our ecosystems. Without nematodes (just like insects) we probably would not be here today.

I had no idea. I love bugs, I can find room in my heart for those nematodes too!

yes give those worms some love too. Cheers!
ian

It's some sort of chemical detection, so only in a very loose sense.

Nice article. Made me remember my school biology lessons. Now I realize that I should have paid better attention to them.

Glad you liked it, it's never too late to start re-learning. Steem is great for that.

Congratulations @effofex, this post is the third most rewarded post (based on pending payouts) in the last 12 hours written by a Dust account holder (accounts that hold between 0 and 0.01 Mega Vests). The total number of posts by Dust account holders during this period was 12896 and the total pending payments to posts in this category was $3140.93. To see the full list of highest paid posts across all accounts categories, click here.

Oh wow, I'm already blown away by the response to the article. This little fact is some nice icing on the cake.

it gives me creeps.

wow nice post I wish you much success! here my profile if you are interested in some fun and my owl