QWOP-NOE: SteemitJam #2 "Into The Unknown" - My first GameJam experience! All feedback welcome!

Overall, I'm very satisfied with the outcome and had a lot of fun participating! I was able to finish my game in time and even had some time for polishing. I stuck to simple but expandable mechanics. I used Unity because I'm already pretty familiar with the engine and C#, which I used as scripting language. Participating in the gamejam also gave me the chance to visit parts of game-development I usually tend to neglect, like sound-design.

Of course there are things I could have done better and will improve in the future. One thing would be that quite a bit of worktime has gone to waste due to having to redo art, as I wanted the whole game to have a similar art-style (extremely low-resolution pixel-art). I also think that a slightly more ambitous idea could make for greater outcomes in the future.
Obviously there is going to be a lot of issues I don't see on first sight - but thats why I'm hoping for constructive feedback! 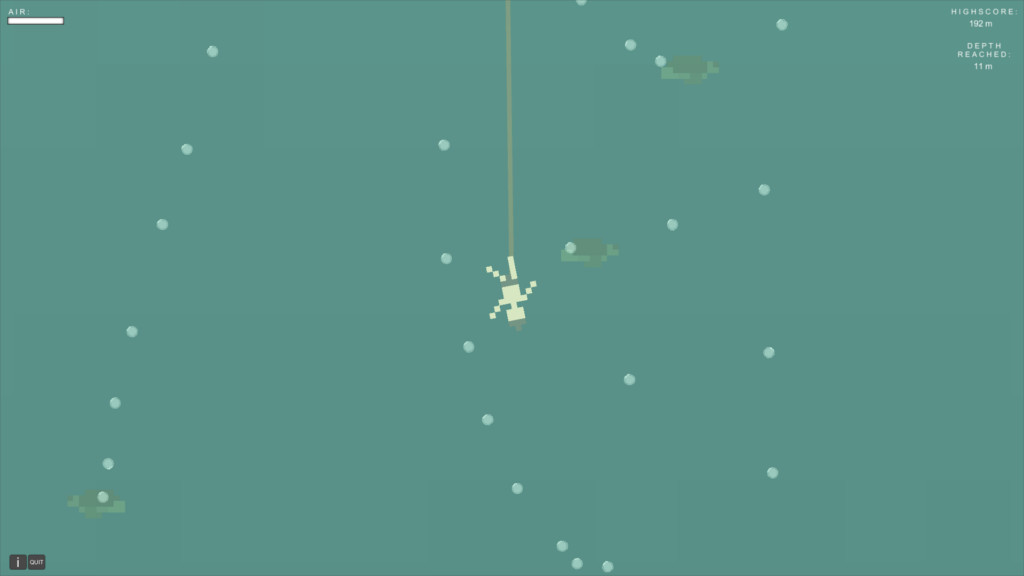 Feel free to download the game and try it out for yourself!

In the following I will list the features of the game and will try to explain my thoughts behind them: Agility based movement, similar to QWOP:

The movement is supposed to give the player full control over the character and is easy to learn - hard to master.

Every movement costs air, which forces the player to make small but meaningful decisions at all times.

The highscore serves as basic player-movitation.

The whales become very important once reaching lower depths and should be able to be located by the player. Thats why I implemented whale noises that become louder when nearer to the player.

The wave sounds should immerse the player in the feeling of diving an ocean. The deeper you go the duller they get.

For me, the most important thing about art-style has always been consistancy - so I tried to at least make everything look equally bad. :P

I decided on very oversimplified pixelart because time in a gamejam is scarce...

I did not want to renounce animations, but did not have the time for animations with more than about 3 frames as there was just too much I wanted to animate.

Congratulations @seschoscho! You have completed some achievement on Steemit and have been rewarded with new badge(s) :