This is the final artwork and works-in-progress sketches which resulted in my final entry for the @iamagco and @cgsociety : Game Of Thrones Art Challenge 'The Fight Beyond The Wall' 🔥❄️

For the challenge, artists participating were asked to 'Imagine during the ultimate confrontation: the last fight between Fire and Ice, The White Walkers and the Dragons.' after the latest season in the Game Of Thrones series.

I initially started with a central, one point perspective concept for this piece;

I wanted this scene to illustrate a final showdown with John Snow who has just been struck down off his fire dragon, and now faces the White Walker leader, the Night King and the Ice Dragon Viserion. But Daenery's fast approaches in the background riding on Drogon, to join the fight and help John Snow.

This was my second colour work-in-progress of my first concept. I decided to expand the canvas a little bit more so I could potentially include some other elements on the left and right side of the Ice Dragon, Viserion. And I also started to think about the light sources in the painting, with John Snow holding his sword set alight with fire.

I did like this idea, but I thought something was missing from this scene, and with it being a final battle scene, I wanted to bring a bit more excitement and interest to the piece. So I then decided to change the perspective of this concept to make it appear more 'dramatic'

This is the first sketch of the second concept, using a more ambitious, 2-point perspective;

This new concept I knew would be much more of a challenge, especially as I only had a couple of days left to enter my final piece for the competition. But I liked the initial sketch, and just went for it full steam ahead!

I wanted to include the White Walker leader on his horse for this piece, standing in front of the Ice Dragon. But In the end, they both would have collided with the line of fire which separated John Snow from the Night king and Ice Dragon, so I decided to leave the White Walker out of the painting.

I went with my first colour pass, all the way until the end;

And here is a close-up of the final painting, showing the Ice Dragon and the Night King; And the final close-up of the final painting showing John Snow, and Daenary's passing on her fire Dragon; 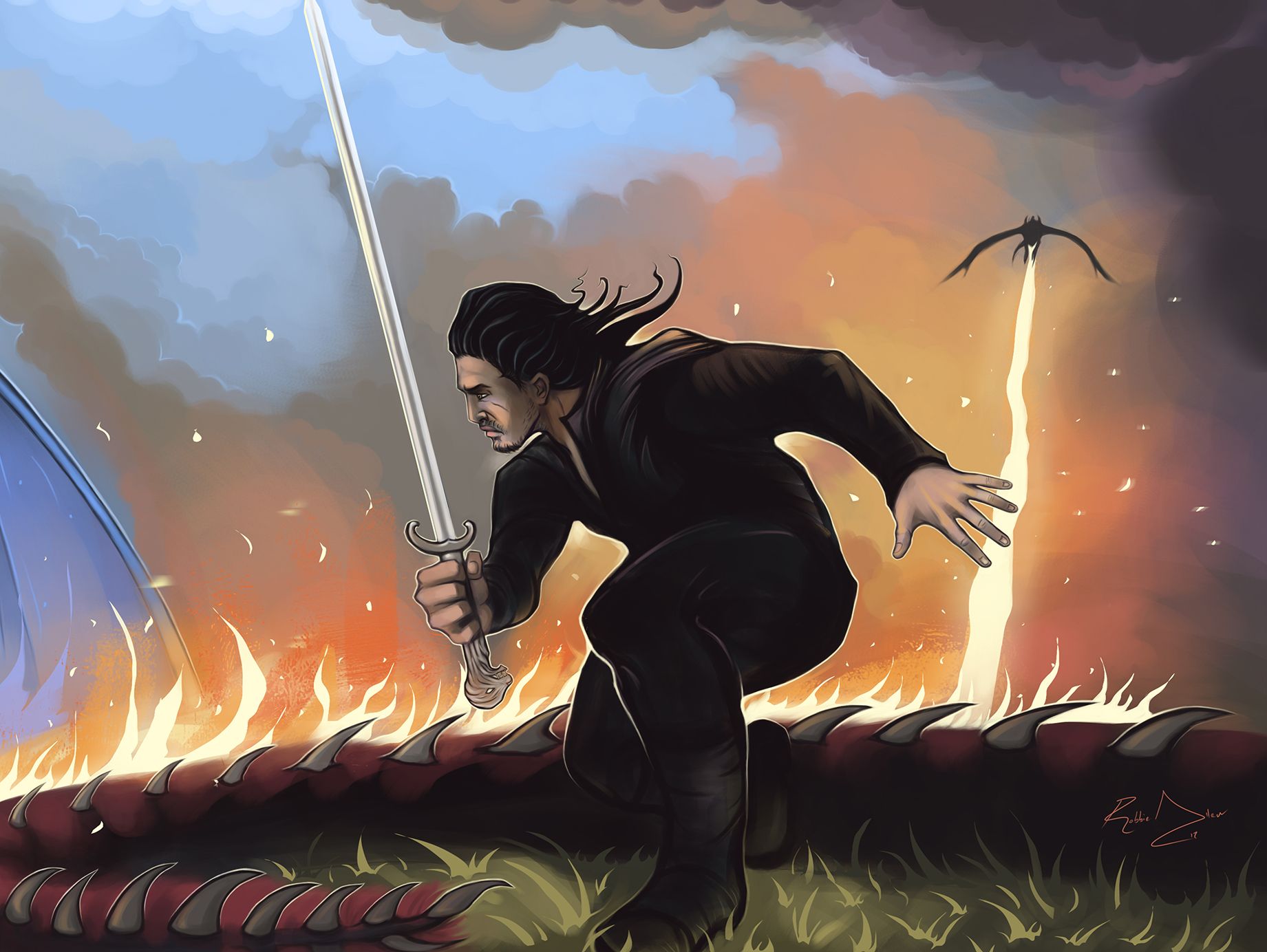 And the final painting once again;

Submit
$81.37
87 votes
18
Authors get paid when people like you upvote their post.If you enjoyed what you read here, create your account today and start earning FREE STEEM!
Sort Order:
[-]
ewuoso (63)  ·  2 years ago

wow. this is pure talent. john snow be looking ready for battle

@ewuoso Thank you for commenting! Indeed he is!

@partycrash, yeah I have to admit, it's the first series I've ever watched!

@bridget.art thank you! I do too!

Woow, so amazing, you have done an excellent work, congrat, i love got to jaja.

@wildartist thank you very much! It wasn't easy, because it was a 'last minute' attempt with my second idea. But I was happy with the end result!

such a great work !! you got definitely talent mate... keep going !!!

And this my friend is what i called real beauty!

@ricardoscimeca thank you! I changed this idea last minute probably a bit over ambitiously hoping I could make it more 'epic' than my original concept. The two-point perspective in this was much more of a challenge! But I'm happy with the result.

awesome work mate, i just create a discord server for creators like you
hopefully you want to join ^^
here : https://discord.gg/YRrTRc

@aranda thank you! I'll have to check that out, I've never heard of a discord server before.