Steemcleaners - a scam to make money? Whales, I may need your help, this post will most likely be blown out of the water.

Because of an earlier post I did about how to improve Steemit, I decided to see what it is exactly that @steemcleaners does.

Let me be very clear, I do not agree with individuals trying to force their opinion unto others.
And this is exactly what it looks like @steemcleaners is now trying to do.

@steemcleaners, your very first link in the daily report of 16th September is Unverified Identity.
This is a rule you guys came up with, nowhere does it say that someone need to identify themselves.
Putting this link in your report can have a negative effect on the reputation of an individual!
Also just the fact that you're commenting on a post gives people the idea the author did something wrong, even if the didn't. 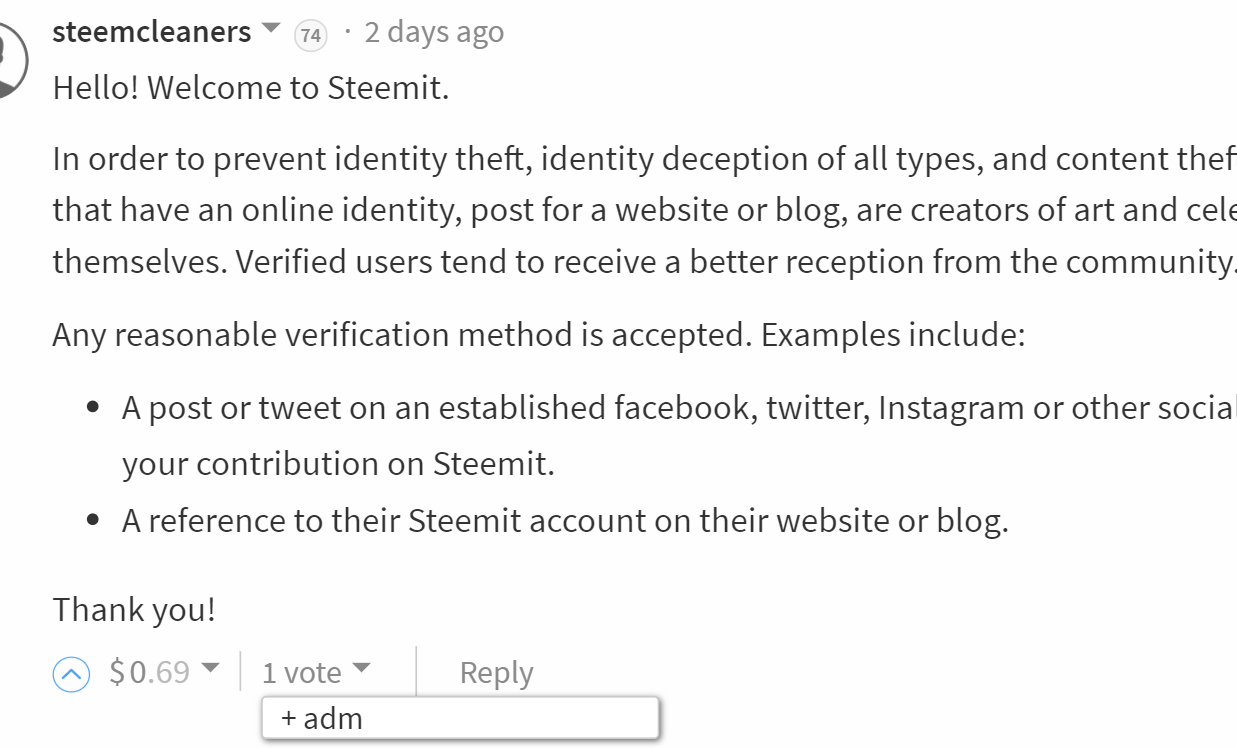 It looks like just commenting gives you a sizeable payout, is that why you put this bogus comment in?

You also downvote posts because you decided they are spam? Nowhere in the whitepaper or anywhere else does it say you cannot put a referral link. You decided you don't want/like that and you are making money because of this.

Then we have comments where you say it may be something may be copy/paste or plagiarism and could result in action from @cheetah bot.

And look at the result: 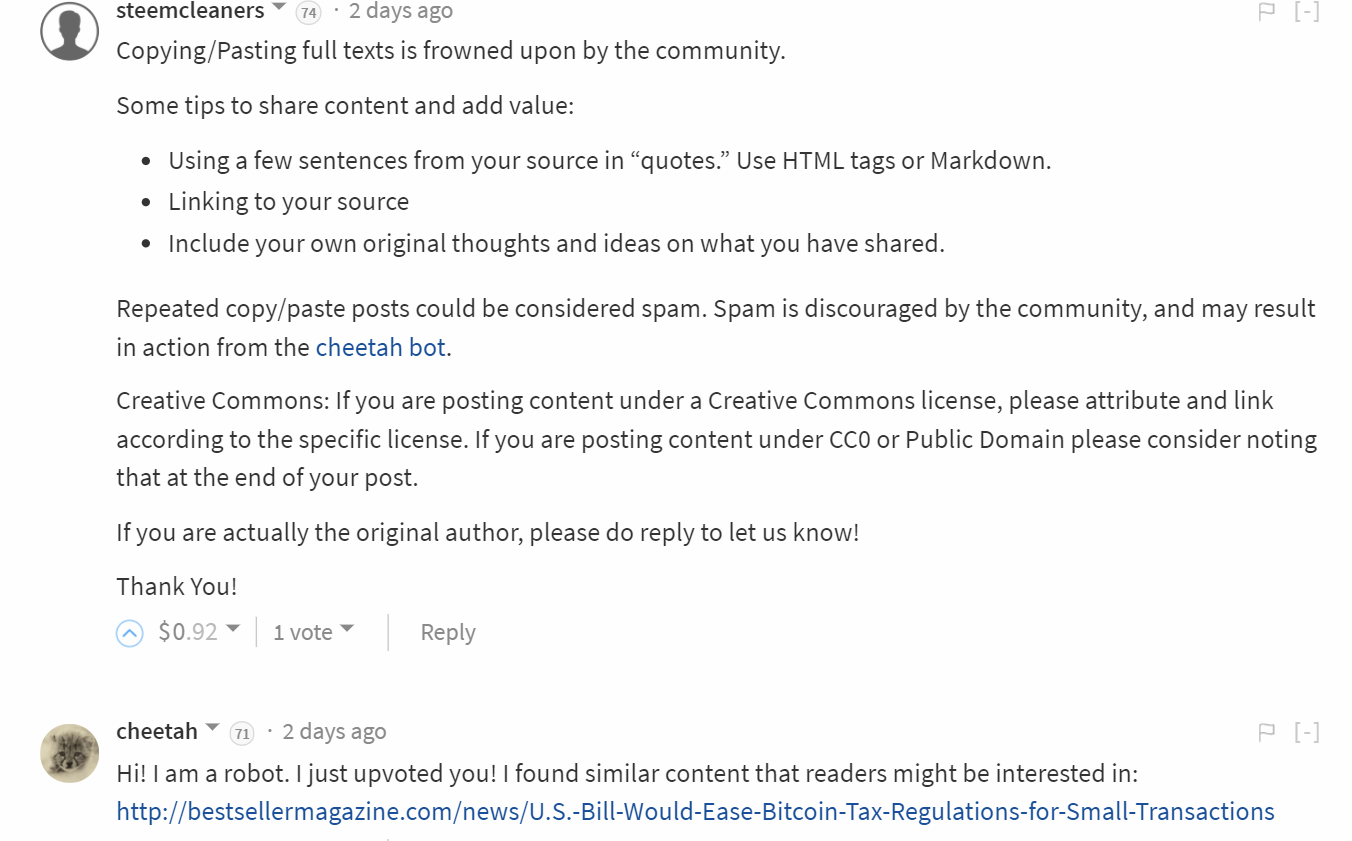 @adm, @steemcleaners, this is exactly the kind of behavior we want to avoid, but while as it looks now, you're abusing the system more than the people you're flagging.

After this we get someone else chiming in:

Really people, get a life. @cheetah, please remove this ban option, I have no idea what it does, but is seems to make people feel empowered to rule over others.

By the way, this @zathras guy only comments with cheetah bans, while he himself only copy/pastes from the internet and makes money doing this. Just check out his profile.

I realise perfectly that I'm opening myself up for attacks here, and I'm sure a few people will try to flag me into oblivion.

But we cannot give in to bullies, we need to make Steemit a place where everyone can give their opinions.

P.S. one thing I forgot to include. Where do people vote so much for 2 daily reports of steemcleaners? They receive from $70 to $100 per report, for just a bunch of links?

Let's make one thing absolutely clear. I think steemcleaners started with the best of intentions, but in my opinion they are moving in the wrong direction.

Meh. They're the first line of defense against plagiarizers. Can't abide plagiarizers, so @cheetah is cool in my book.

You are 100% correct.
Beware, there are A LOT in this crew.
It's good that cheetah can find plagiarism, but it isn't that good, it's pretty weak at that task. Why would it need a cheetah ban feature if it was good? It wouldn't.
This crew is circle jerking themselves to get large payouts. That's common and allowed. We can't criticise them for that while we're saying don't criticise us.
They have a pretty good game going on here. There's a need to keep steemit clean, but at what cost to average users? They are no different than a gang of vigilante bullies.

PS. I had a chat with one of the crew and realized how manipulative and brainwashed these self righteous folks are really... Beware!

@steemcleaners does a much needed task of trying to keep scams, plagiarism and spammers off the platform.

Are they perfect, do they get them all.. no but they are a bunch of volunteers trying.

While there are no rules set out by Steemit Inc, there are standards that have evolved from the community over the time of its existence.

It appears you've not been a round long enough to have seen some of the crap that can take place on this platform. A group of people trying to keep it under some level of control is appreciated by many.

I disagree with you and are this post is meant to call for a wide discussion about what is and is not allowed.

Currently we have a group of people dictating what is and what is not allowed. Without looking at the intentions, I see the effect they have on the community, but also outside. And this is primarily becoming negative.

Nowhere can you find which rules they keep, what is allowed and what not? When will you get a remark and when a downvote? How do you object, and if you object how can it be steemcleaners itself decides if they were right or not?

Steemcleaners managed to grow to a level that every comment they make is immediately a money-maker for them.
A comment about unverified identity looks to me only intended to make money. There is no rule, not explicit nor implied, that you HAVE to identify yourself, and like I said before I will never do that. It does not add any value and is an immediate breach of my freedom. So they should not comment on this, but just the fact that steemcleaners comments on a post, is for a lot of people a sign that this person did something wrong.

Not only is steemcleaners making money with every comment they make, but also any normal user does not stand a chance when they downvote you.

The reason most people on Steemit don't speak out is because they are not the target of steemcleaners, and many are afraid of becoming targets.

I've spoken with a lot of people about joining Steemit, but quite a few came back with the remark that Steemit seems to be even worse than Facebook when it comes to censorship.
There is nothing I can say about that, because they are right.

As far as you last comment, that is nonsense. Unless you've been here on another account, I've been a lot longer on Steemit with my other account @blevley. The intention is to start using that for business purposes, but I'm at this time not sure that's the right thing to do.

No serious business will ever join as long as these practices take place.

Without diminishing the (original) efforts of steemcleaners, we are now at a point where some decisions must be made by Steemit Inc. If nothing happens Steemit will no longer exist in two years, it will never grow into the huge social network everyone wants.