If You Joined Steemit in April 2017 Then.....(oh and Happy Steemit Birthday)

If you joined Steemit in April 2017 then you celebrated your Steemit birthday with 8,347 other Steemains. What an awesome achievement to see you are still posting or still curating. Congratulations and welcome to the One Year Club.

It is commonly known that the retention rate on Steemit is rather low, so if your Steemit birthday was in April and you are reading this, let it be known that you have achieved a lot.  You are an early adaptor of an experimental platform and you deserve to be acknowledged.

To celebarte your 1 year Steemit Birthday I have some data to present to you.  Data that proves you are special

Did you know that the % of new steemains that joined in March 17 that made a post or comment was lower at only 36%?

Taking the same dataset but now adding a filter to exclude any users that have not posted.  The 3,593 accounts that have posted own 72% of the SP owned by everyone that joined in April and they are in control of 75% of the controlling SP

We spoke about retention, but just to let you visualized when the accounts were dropping off.  The chart below plots the number of days since last post against the no of days registered on Steemit.  The deeper the color the more users.

We can see on the right of this chart high population of deep colours.  This represents the users that registered and either never posted or haven’t posted in 350+ days.  As we move to the left of the chart we can see the drop off slows down, with another peak around 260 days and 210 days.  There is then a further slow down in drop offs and on the left there is a high concentration of accounts posting, which represents the 6% of accounts that have posted in the last 45 days. 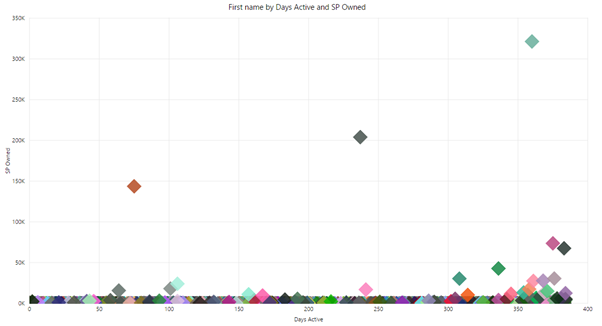 First I filtering the data to show accounts that never posted.  This table was then sorted to show those owning the most SP. 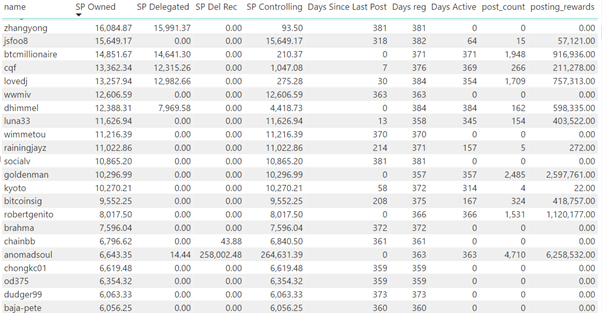 Next I have filtered the data to show the users that have been active in the last 45 days. The table below shows this data sorted by SP owned 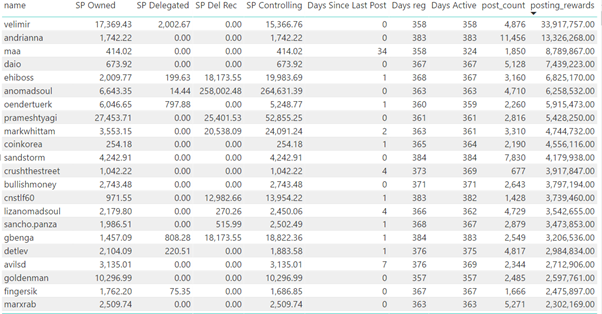 While sorting through this data I found a number of accounts that registered in April 2017 but only made their first or second post in the last 45 days.  Welcome back dudes and dudesses.  Glad you have joined us.

Looking at all April 2017 accounts now and sorting by the number of posts and comments made. 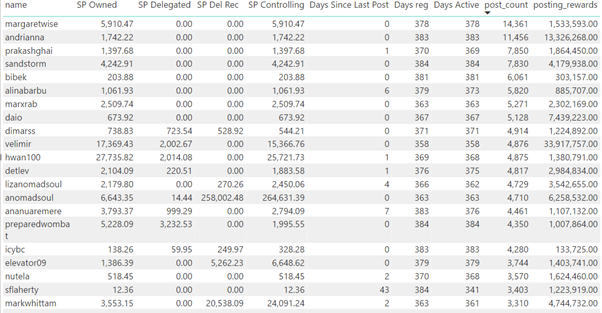 Finally I did some totting on data relating to inactive author accounts.

The % author retention from April 17 is only 6%, however these accounts own 72% of the SP owned by all of the accounts registered that month. In the last 45 days, we seen a return of 15 Steemains to the platform that were previously considered dead fish.  Although only a small value,  it is nice to see this claw back.

How many of the accounts do you recognise?

There are a few familiar names such as @velimirm @markwhittam @skan and @starkerz  Hope you all enjoyed your Steemit Birthday!

The Data and Analysis

This analysis was prepared using Power BI to connect to Steemsql

The SQL query used was

From here I used the M language in Power BI query editor to remove any columns I did not need, before I loaded the data into the model. The data was extracted 20 April 18

From here I then carried out analysis, calculations and modelling using DAX

The aim of this analysis was to establish the retention of authors based on users registered in April 2017 and also visualize the SP growth of active authors after 1 year on Steemit.  Its aim was also to celebrate and identify users that have remained active for the last year.

Please do consider @steemcommunity as your Steemit witness – this is a witness team set up by @abh12345 and @paulag  (ME!)

Happy birthday for those who celebrate it, it turns out that one year of time not so long to be passed, it seems only yesterday this steemit began to be declared, this is the time so quickly passed, whether there will be a suprise for this celebration mom:D

happy birthday for those who celebrate it, it turns out that one year of time not so long to be passed, it seems only yesterday this steemit began to be declared, this is the time so quickly passed, whether there will be a suprise for this celebration mom:d

Congratulations for those who have joined in the beginning of steemit. I love it all :)

The very low retention/user rate is something that needs to be addressed, if we are to grow.

What is the reason, do you think?
The website design itself...?

happy birthday to, steemit users who have long joined, and fore more successful ,,

and there's quite a few interesting ones at the top of this list, too!

ohhhh now I really have to find out who you are :-)

Maybe you are giving me a hint here

Happy B'day to who ever celebrate it! (hopefully will remember and I will wait for @paulag b'day in June on Steemit) LOL

Happy Birthday to all the bots slowly draining the Reward Pool.

May your greed be forever immortalized in the blockchain.

Haha no wonder i recognised so few of the names

Wow, awesome statistics. This will help me understand the platform and steemians' behavious a lot better.