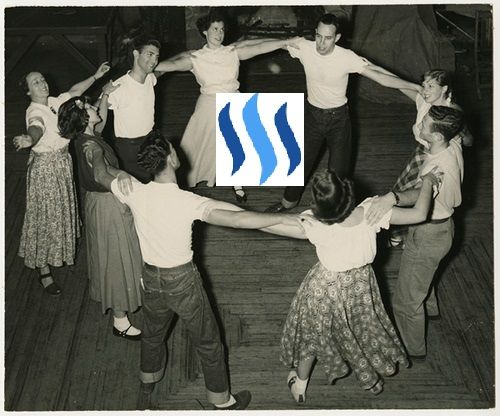 Google "circle of gifts". You'll get this. No comment.

I don't write many posts about blogging tools or advice these days. By this point, that is rather thoroughly trodden ground. I only mention a new tool I come across if I feel it is both useful and not already widely known. SteemEngine appears to meet both those requirements, (ref link) and though it is very similar to SteemFollower there is no reason not to use both. If you have any substantial voting value (this is subjective - but even 50 cents per vote or less is substantial at current prices) then you are leaving significant money on the table by not using one or both of these tools.

SteemEngine is very similar to SteemFollower, so if you haven't read about that, check my signature for a summary. The TLDR is if you vote someone (all numbers arbitrary for illustration) $1.00 through the SteemEngine interface, which is a mirror of Steemit posts of other SteemEngine users, you will receive $1.00 in points. The more points you have earned from voting others, the higher you are ranked in the "Trending" section on SteemEngine, and will therefore receive more votes in return. As you receive votes, your points are reduced a corresponding amount and given to the new user, moving your post down in "Trending" and theirs up. Not the confirmed votes earned and votes incoming on the right. Also lol Microsoft.

Hopefully, it's now clear why I call SteemEngine (and SteemFollower) "vote generosity ranking" mirrors, as that is precisely how posts are ranked - total outgoing unreciprocated upvotes. The unreciprocated part is key, as it ensures a "fairer" distribution of voting value. This would mean that around the time I took this image, my post would have been at the top of this list, as I had $50 in pending votes and the top post had $17.

SteemEngine has implemented one of the features that used to exist on SteemFollower, but was later removed - the follower exchange. Overall I would say this is only a minor part of the value of the tool, as low-engagement followers are of dubious value. Usually newer bloggers are more keen to add to their follower numbers, regardless of the quality of those followers, and the temptation is to track and post follower milestones. In reality, your following numbers are somewhat irrelevant as the quality and engagement of the followers is paramount. However, the tool is there for those who want to use it and based on my first use, has no technical issues. It will be ironic if it is later removed. 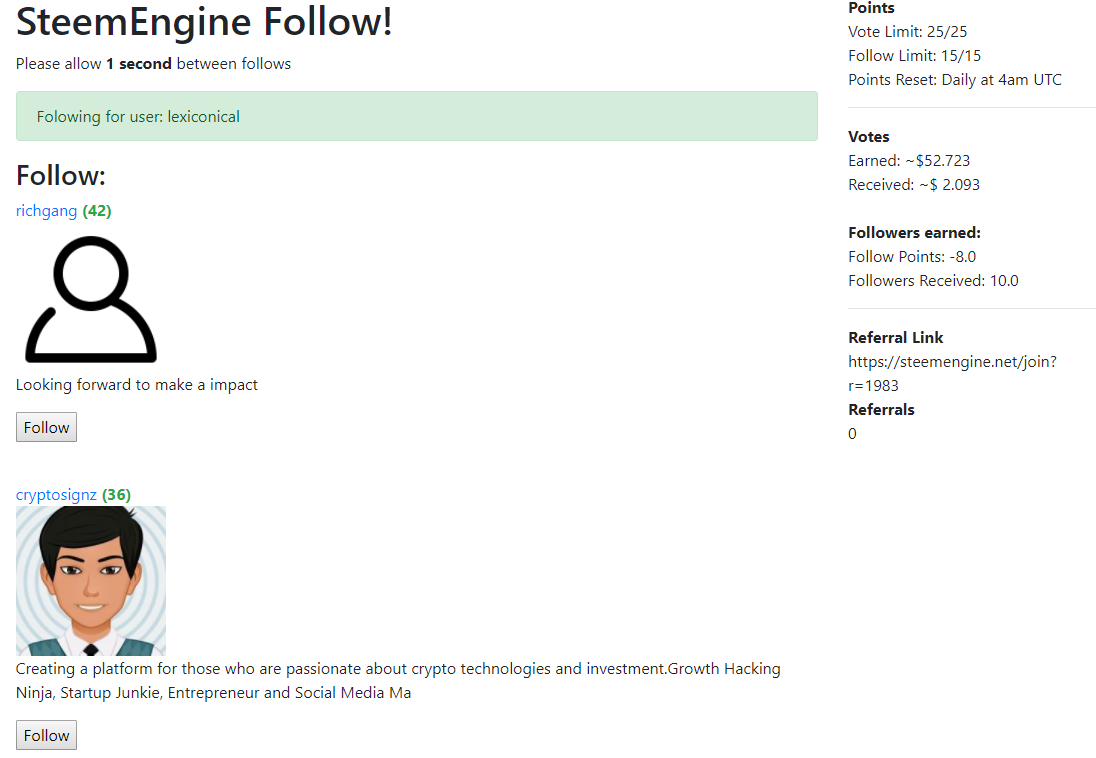 I found there were fewer low quality accounts in the following section than SteemFollower had before closing it down.

SteemEngine has a rather diligent "team", though I am unsure how many members comprise it. The team has only been active since December, but regularly posts stats and promotes SteemEngine directly to various language- and region-based communities around Steemit. You can see the team keeps a regular posting frequency.

The interface, owing to its young age, is still missing a few helpful features such as hiding a post you don't want to see. On the other hand, it also has some nice bonuses, such as the ability to follow AND comment straight from the upvote/curation section of the site. I certainly find the faster commenting a great bonus.

Another item missing from SteemEngine is the market, where you can buy and sell your excess points for SBD. This is a more complex feature to implement, so it may take some time for something like that to be implemented. Daily limits for voting are 25, and following 15.

I would also like to see SteemConnect integration for SteemEngine, as currently you have to give up your posting key lest the service be unable to vote on your behalf. This is of limited risk, as even a malicious actor could not do much more than vote or post on your account if they acquired the key, but it bears pointing out so each user can make their own risk assessment.

Bottom line, after testing, SteemEngine works as advertised. It provides free value for using it with the only real cost being the slimmer selection of content available and less advanced interface, small prices to pay for getting votes back equal to your own. It has reached almost 2000 users since December and looks to continue increasing in size. The security "risk" of giving out one's posting key is rather minimal, as it cannot be used to withdraw from your account or change your password.

Here is my referral link if you are not averse to free money, otherwise Google it.

I'll continue to use SteemEngine for now without reservations. Check in on their Discord if you'd like to learn more, and check out the team's blog at @steemengineteam .

Join us at the Minnow Support Project! (click me)
We also have a Radio Station! (click me)
...and a 5000+ active user Discord Chat Server! (click me)
Almost 80% of Steemians do not vote for witnesses, who secure the Steem blockchain! If you wish to make me your witness voting proxy, I will attempt to vote in Steem's best interest based on the information in my witness reports. You may set me as your proxy by clicking here and scrolling to the bottom of the Witness Voting page. Proxies are instantly revokable at any time, and witness voting does not use your voting power.

So basically it’s much like other addons which help to give you more views by sharding a portion of the posts into itself based on various code inserts so that there are more relevant posts to said platform. It’s free. As long as They don’t ask for the owner key then I’m pretty happy :)

Yep, that pretty much covers it. Although since it directly gives you credit for upvotes, I'd say it also helps with votes, not just views.

So if your votes are worth more, you get more points? or is it just a point for a vote? I think you answered that, but I'm just double checking because it's something I was wondering about.

The more Steem Power you have, the more points you get for your votes. It is all stake-weighted.

I mean when I vote on steem engine.

Does it differentiate between if I cast a .01 vote or a .50 cent vote? Or is a vote just a vote? Am I incentivized to use a higher percentage of my vote through their platform?

Where do they make their money? Do they take a cut of the votes?

They don't actually create any money. The points they grant rank you higher on their trending page until you receive that much in votes. Think of it more like free promotion than a payout.

Interesting, I guess they're just hoping for large adoption and looking for monetization down the road/a big delegation from steemit.

plz can u vot my replay here
https://steemit.com/photobombchallenge/@fibra59/4k4eqt-photobomb-challenge-8-winners-of-7

Interesting share here @lexiconical... I will check them out now. Thanks!!

Thanks for the advice very useful for me.. one of my favorites heheheheh :)

Thanks for the advice very needful and neccessary.

So basically
it’s much more like other addons
which help to give you more views by sharing a portion of the posts into itself based on various code inserts .

this is the best
keep up the good words

Cut and pasted another reply.

I guess you can't complain for free upvotes, but do you feel you ever get your "money's worth"

Your referral link is timing out.

But, thanks for the great info.

It's nice to see you back here again.

Good post for minnows. What would be the strategy for newbies with 2-5cent voting power?? I think the only thing is upvoting first and split 99% with the author...