How to optimize your upvote (mathematical analysis)

There are many questions about curation. Do you want a better performance in this issue? This post will show you all the answers. We will see some maths here, but don't worry, if it is complicated for you just jump to the summary where you will find the main points to follow.

The formula of curation

In my last post we found the formula of curation: 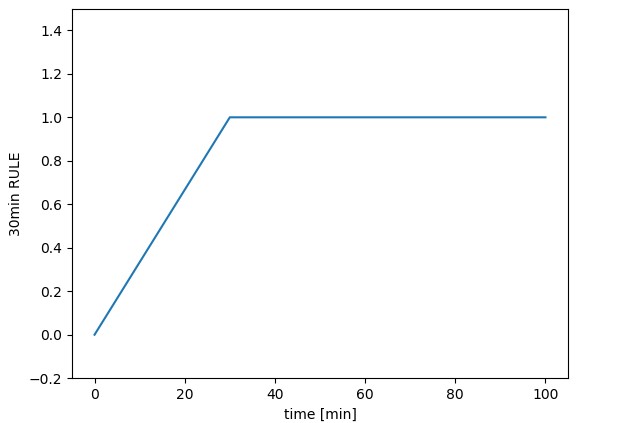 Note: On steem, the formula to calculate the square root is not exact but approximate, to be able to make operations fast. Then the above calculations could differ a bit from the reality.

But this value must be transformed into STEEM. If 1 Steem is worth in $5, then

Then you will receive 0.018 Steem Power. It is easy to calculate, but we need to go into more detail about the implications of this formula.

Let's rewrite this formula in terms of the worth of your vote. Suppose that your vote is k times the payout P1, and the final payout is s times (scale) the payout P1:

For instance, if you are the first voter, then k=1 because there is no previous payout and therefore your vote is the total payout, P1 = v. But if you are late in your vote (P0 is big) and your are a minnow (v small), then k will be near 0.

As you can see k is a constant between 0 and 1, and defines some characteristics of your vote with respect of the timing and the popularity of a post.

With some calculations we get:

Including all this in the formula we get: We can group the first fraction in a big K:

Then, rewriting we find this:

The value of K

But, what is the meaning of the big K? It represents the transformation of k into money. As we saw earlier, k is a value between 0 and 1. Let's see the range of values for K.

This is more difficult, we need to apply the L'Hopital's rule 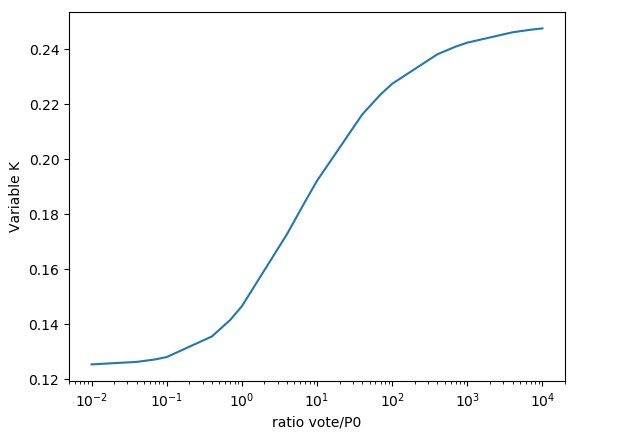 Example 1: Minnow votes early for a post that becomes trending

She will get more than worth of her vote. This would be an ideal case, but difficult to achieve. Look, she is first, which is good, the vote is after 30 minutes (the 30-min rule is all for she), and it grows 50 times!!. One important conclusion is that your rewards increase with the square root of the scale. As the payout increases 50 times your payout increases sqrt(50) times (that is 7.07 times).

What we can conclude here is that your Steem Power is very important. The more you have the more you receive in a proportional way. In the example, the curator received one eighth of his vote.

The result is almost the same as before, the curator receives one eight of his vote. Look that we found that K is almost the same in both cases. Then we can conclude that this value is near to 1/8 when you upvote a post in trending no matter if you are a minnow or a whale. This is an amazing simplification, since by definition K depends on the value of the vote.

He is not the first voter but the worth of his vote is much higher than the initial payment, then K is higher similar to the example 1.

Suppose you vote late and the post does not grow after the upvote. Here K takes its minimum value, and s is 1.

Many people thinks that if you upvote a trending post worth in $2500 you will receive less than other post worth in $400. This is not true. The above calculation clearly shows us that there is a minimum no matter the value of the post!! It depends only on the worth of the vote.

In the previous examples we always assumed that the vote was made after 30 minutes, where the value of t is 1. Here we will see what happens when you upvote before and what is the best time to do it.

When the curator upvotes the total payment is P1. This payment scales s30 times and reaches the payment P30 at 30 minutes. On the other hand we use the same s to define the scale until a week, the final payment PT. And from 30-min to a week the post scales c times. In this order of ideas:

The question is: Should I wait until 30 minutes? or is it better to upvote before? First lets see the curator's payment if the he upvotes at 30 min, that is s=c and t=1:

On the other hand, if he upvotes before we have:

Where Dt is the time of the vote in minutes. Now, let's compare these 2 results. We will assume that the value of K is close in both cases. Conclusion: If we believe that the post will grow greater than 900/Dt² then it is better upvote before!! Examples:

Your rewards for curation can be calculated using this formula:

This payout is transformed into Steem Power, then it is divided by the price of steem.

I hope you enjoyed it as much as I enjoyed writing and scrutinizing the reward system.

Wow, I am impressed. Congrats!

You should repost this in a form of the tutorial at https://utopian.io/.

Do you think that this is possible?
When I write this post I had doubts about whether to publish it in utopian or not since it had to do with mathematics mainly and not with software as such, I do not know if I was wrong in it

I think this could count as documentation.

You can try it as tutorial.

thx for the in-depth analysis, wow seems a bit more complicated than I thought ;) I will continue to upvote favorite stuff without thinking too much about the formula ;)

Welcome to Steem.center, thanks for registering! A link to your post was included in the wiki article about Upvote. Feel free to edit, change or add any information you want. Thanks and good luck again!

thank you very much. I started with some changes and a new page :)

Thank you for this very good post! You explained everything very well and it's easy to understand all the concepts.

WOW. Excelente work. I was doing a lot of searching to find a formula for rewards and you gave them to me with analysis and examples.

Yes. This was the idea. I'm glad it's helpful.

Some amazing math there my friend.

Thank you for coming here and for your upvote @kus-knee!! :)

Such a great info!
Thanks!

Very informative and helping. Thanks @jga

Very nice. Thank you so much for your great explanation. Best regards.

This is really impressive. But wait. If I have read through an article and heading for another there will be not much time to ponder all that square maths through.

Nice and clear explanation. Thanks for sharing.

Welcome to steemit ! Nice paost ! I hope you enjoy here ! will give the vote to you, Please upvote & follow me

Amazon math calc. ThinkPad you for swing for us

Excelente! Where can I find more technical info like this?

Wow, excellent work!
I was trying to find sth like this for ages!
And I have two questions, sir @jga:
– are the current formulas still valid?
– would it be O.K. if I'll translate your post into czech? I will add link of original source, of course...
Thank you so much!
Cheers!
khjk

Hi @khjk, thank you.
Yes, they are still valid, but they will change a little bit in HardFork 0.20 (there is still is no scheduled date of its release).
It would be a pleasure to translate it. Go ahead! (write me when it is done to give you an upvote)

I just finished 1st part of your article!