Celebrating My 1,000th Post on Steemit with Tribute to Steemit - My Public Statement of Commitment and Contribution to the Platform 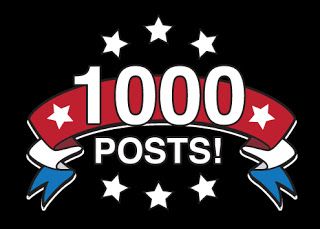 I have been a member of this amazing community since December 30th, 2017. In the past 2 1/2 weeks I have been absolutely amazed with the concept, social interaction, environment and the direction in which this project is going. I have decided to make this platform and it's success a top priority in my venture capital investments, and will be contributing considerably with both knowledge and monetarily.

The reason I am making this my 1,000th post, is that making a pledge publicly normally results in the execution of such a statement. When people hold you accountable to what you say, odd's are you will follow through more so than just letting things slide. I consider myself a man with integrity, however I still like being held accountable (especially if something unforeseen happens).

As of January 18th, 2018, I, Jacob Anthony Billett (entrepreneur916), solemnly swear to the Steemit Community that:

2018 is going to be an incredible year, and my heart is with this phenomenal project . Let's get it!


WANT MORE VOTES AND FOLLOWS?
Sign up for these free applications and get GUARANTEED upvotes and followers!
SteemFollowerhttps://steemfollower.com/?r=8690
SteemEngine https://steemengine.net/join?r=340

Congrats! Lets get this thing some traction during beta and all come out more well off...intellectually and financially!

Thanks for the love man! Steem engine works great!

It sure does. Just gotta use it everyday. Make it a priority.

Yayyyy!!! Good job baby! You've worked so hard for this. It's so amazing to see the man I love completely crushing his goals with pure hard work and dedication. I'm so proud of you and me and the fur babies are so lucky to have you!!

Thank you babygirl...you crushed the fence building today so we are both crushing it.

thank you so much! Let's do it!

@entrepreneur916 Congrats and it's such an awesome achievement. Keep posting and reach another new milestone in near future :)

Thank you my Brother. This platform has been so kind to me...has given me new drive and purpose in life. I hope all is well with you.

Thank you so very much! Hoping success for all of us!

Congratulations @entrepreneur916, this post is the fifth most rewarded post (based on pending payouts) in the last 12 hours written by a User account holder (accounts that hold between 0.1 and 1.0 Mega Vests). The total number of posts by User account holders during this period was 2685 and the total pending payments to posts in this category was $8230.20. To see the full list of highest paid posts across all accounts categories, click here.

Well done mate. That’s a great achievement and you have some very honourable goals.

Thank you very much for your support. I have HUGS goals in mind.

Have you looked into the @qurator group? They are great for helping minnows get established. I think you have to use a capital o.

The @OriginalWorks bot has determined this post by @entrepreneur916 to be original material and upvoted it!


Please note that this is a BETA version. Feel free to leave a reply if you feel this is an error to help improve accuracy.
$0.00
Reply
[-]
entrepreneur916 (60) 4 years ago

I have just sent in for membership

nice to see you having a goal and the specific actions to that. thanks for being part of the steemitachievers community!

Thank you! Now if only I could get the attention of the Steemitacievers whales...

I totally appreciate with you idea. As I've read in this blog that you'll support to new users and delegate to some good project, reinvest in your account to grow this community. I am here since July, 2017 but I am not growing such fast as you are growing. Have a good day! Nice to meet you and I hope that we'll connect with each other.

Thank you so much! I'm hitting it hard and doing what I can for the community!

You are doing awesome. I've send you my friend request on Facebook. My FB name is Koshal Rakesh Saxena

Thank you brother! I think I accepted the request?

Thank you so much! This is our year!

What a wonderful idea.Thank you

WANT MORE VOTES AND FOLLOWS?
Sign up for these free applications and get GUARANTEED upvotes and followers!
SteemFollowerhttps://steemfollower.com/?r=8690
SteemEngine https://steemengine.net/join?r=340