Can the Gossip Tell us Why Ned Undelegated SP? The answer is no

Data can prove something, as well as data can cheat some people. Gossip is fun, but one has to be seriously careful if one's gossip can ruin others' reputation.

In one of @paulag's latest posts some data were displayed. Frankly speaking, I read some of @paulag's data analysis reports, which were impressive and useful. However, the post Can the Data Tell us Why Ned Undelegated so much Steem Power? was rather disappointing. The hints or conclusions of this post were unreliable to my comment sense. As the author said that 'the data is correct', I decided to see if it is true.

The data displayed in this post were taken from Steemsql held by @arcange.

It is easy to find that the first table in @paulag's post disagrees with the chart. The maximum of @surpassinggoolge's votes (grey area) was 700 votes per day in the chart, while the average was 1327.4 votes per day. Apparently wrong. The average cannot be greater than the maximum. 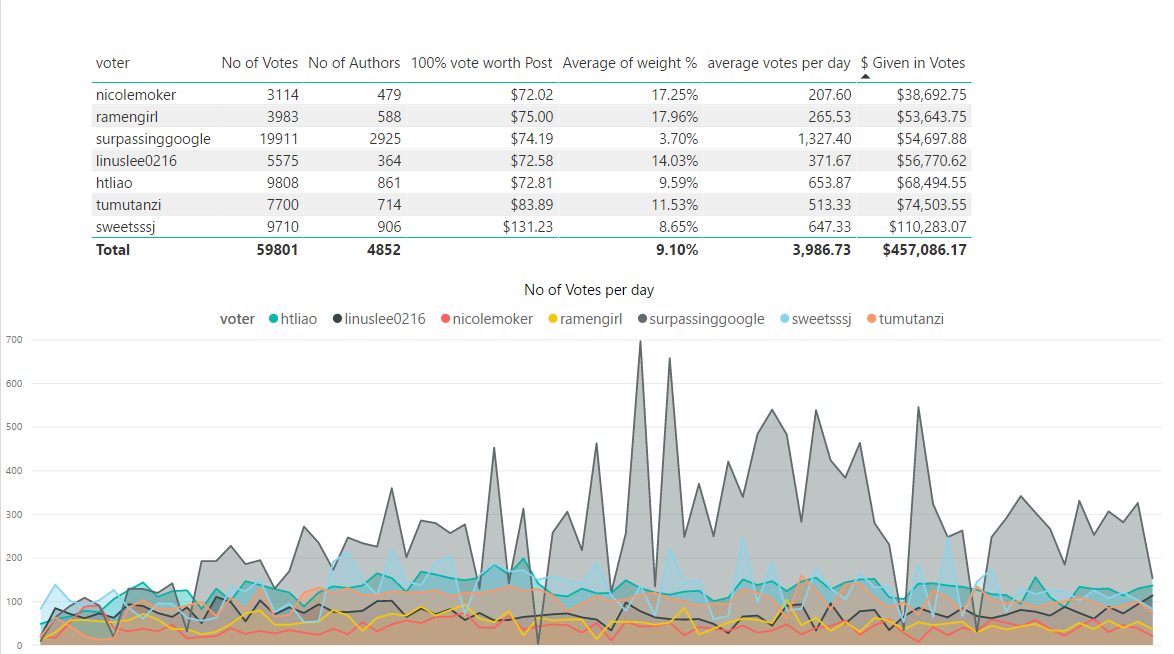 So, what is the truth?

Let's firstly see the time when @ned delegated and undelaged the SP.

If we ignore the fist day and the last day, each delegation lasted 76 days.

I examined the data and got a new table:

The daily averages are around 1/5 of @paulag's calculations.

The numbers of votes are slightly different from @paulag's, perhaps because @paulag's post took a different period of delegation, which was not mentioned in @paulag's post. This slight difference could be simply ignored.

Based on @paulag's incorrect calculation, all the subsequent numbers and conclusions were wrong, including the '$457K', 'Voting over 1300 times a day, this does not surprise me','...

What still makes sense is the pie chart, some ratios and percentages, and the cluster diagram. However, I would double check them, as the post was carelessly written in the first place.

It seems that @paulag's post was intended to give some facts or data, but actually it was giving only some opinions based on wrong data and groundless assumptions.

1 Reading the top memo on the table below, it very quickly because clear that @htliao was selling votes.
2 The data clearly shows @sweetsssj was also selling votes.

I doubt what 'selling' means here. In my mind, if A sells somehing to B, it means that B pays A money and takes something away from A. But in @paulag's data, you can only see B paid A money. What did B take away from A? If nothing, was A selling? If I transfer some SBD to @paulag, can I immediately say that @paulag is selling votes to me?

I am sure that the logic of @paulag' post was broken.

3 Within the memo for @htliao were also suggestions that @htliao may be leasing out some power.

This conclusion was based on the transfer and delegation history between @htliao and @justyy. Many people have explained that justyy was just collecting some SP so as to support minnows. As a feedback and acknowledgement, justyy paid some so-called 'interests' to the delegators. I delegated some. Besides @htliao and me, there have been some other delegators too, receiving interests from justyy everyday. It was not surprising that @paulag's post did not mention this, because the author knew nothing about the minnow support program.

As @paulag's post gave incorrect data, broken logic, and knew nothing about some facts, I think the post makes no sense to its title. Furthermore, it is badly misleading many readers, and ruining the reputations of the innocents.

'I also decided to have a dig through the memos,' said @paulag's post. I am looking forward to a further report, hopefully with no mistakes. This post of mine is only mentioning the mistakes in @paulag's post itself rather than my opinion to the author in person. I really like @paulag's previous reports, especially the nice charts in them. I wish @paulag could share the excel sheets so as to make the data analysis reproducible, repeatable, and reliable.

The wrong data in @paulag's post, especially the daily average votes, e.g. voting over 1300 times a day, mislead some people. They thought that these lucky guys voted with bots. Is voting with bots forbidden or a shame? I do not know. But let's see if they did it.

The figures below showed some 24-hour clocks, indicating the hours when they voted. The diameters of each sector showed the percentage of the quantity of their total votes. There were nearly no vote in some hours of htliao, linuslee0216, nicolemoker, ramengirl and tumutanzi's clocks (humans have to sleep), while surpassinggoogle's votes covered all 24 hours. If this is the reason why @ned is still delegating SP surpassinggoogle, then why did @ned undelegate from sweetsssj, whose voting hours showed a similar pattern?

Can the Data Tell us Why Ned Undelegated so much Steem Power? Apparently the answer is 'no'. Data only show the facts (if the data is correct ), rather than the cause or intention. Only @ned himself can tell us the answer.

Before and after @ned's Delegation

What happend after @ned's delegation? See the comments (posts + replies) under cn category in the figure below. The vertical line indicates the date when @ned delegated SP. 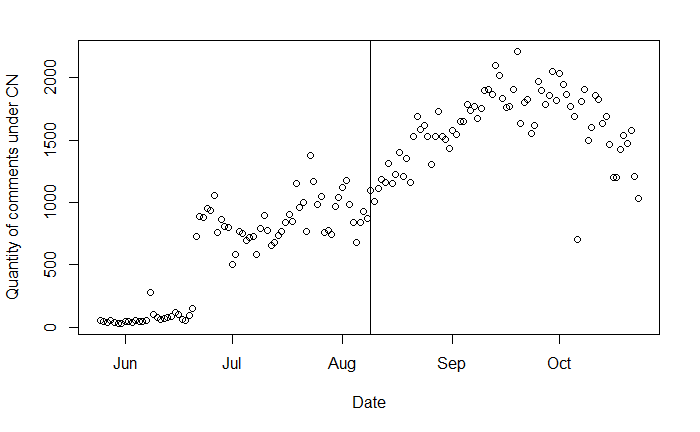 PS. If you find any mistakes in my post, please let me know and you are highly appreciated.

本文是对污蔑几位临时大鲸的帖子 Can the Data Tell us Why Ned Undelegated so much Steem Power? 的反驳。中文翻译过来就是：污蔑帖子用的数据是错的，计算是错的，逻辑是错的，而且不了解一些基本事实，所以纯属胡说八道。谢谢。

As far as I know, I usually upvoted 100 times daily during the delegation period. Each day I had 20% voting power and thus 1000% voting weight, so on average 10% voting weight for each upvote.

Your analysis is much more objective, which is amazing.

Thanks. The sum of votes here included your downvotes. If the downvotes are removed from the calculation, your daily mean would be closer to 100.

Thank you @depeng for writing out the data and chart for us. It just shows that data when incomplete and selective can be very misleading. This is very helpful.

Thank you. In the meanwhile we could see how easily people can be cheated.

You have gained a new follower. I hope that you will also read the follow on post that I wrote????

Thank you. I read some comments on your post before I began this post of mine several hours ago. Maybe I missed some new replies.

great analysis there, it is much human-like study than the other's post as the other emphasize too much on data and forget about human behavior.

Absolutely. Data display is easy, but the interpretation is not. That is why the conclusions must be carefully drawn.

Ya, agreed. Don’t simply accuse others