What is DAG Technology? An Alternative Ledger System for Cryptocurrencies | Coinpickings Podcast #2

What is DAG Technology? An Alternative Ledger System for Cryptocurrencies | Coinpickings Podcast #2

Sergio Demian Lerner published a paper in 2015 outlining his concept of a cryptocurrency called DagCoin, which deployed DAG technology instead of blockchain technology.

DAG stands for Directed Acyclic Graph and can serve as a viable alternative to blockchain technology as shown in cryptocurrencies such as DagCoin, ByteBall, and IOTA.

Grading papers can be a considerable workload for any teacher. If Bob the teacher has 5 classes or approximately 150 students, he may have to grade 150-300 papers/assignments per week.

Rather than spend a significant amount of his free time grading these papers from scratch, Bob decides to hold a peer-review session in each class once a week for students to grade each other’s’ papers.

Now all Bob has to do is quickly review each peer-graded paper as they are turned in to ensure that students are grading fairly. The occasional error is inevitable but Bob is on the lookout for such errors and he will manually take care of them as they present themselves.

DAG is very similar to this peer-grading system. Instead of having large mining firms confirming transactions via proof of work, DAG employs the very transactions that users make in order to confirm each other’s transactions.

DAG is essentially a distributed, peer-confirming system at scale. The more new transactions on the network, the more the available transactions to confirm previous ones. DAG could solve many issues associated with blockchain technology:

Increased Reliability – Built-into the DAG system is the multiple confirmation of transactions – both direct and indirect confirmations. This leads to an increased level of security and decreased likelihood of double-spending when compared to transactions on a standard blockchain.

Simplified Mining – Mining on a typical blockchain cryptocurrency (Bitcoin for example) has led to an oligopoly issue. That is, the majority of mining power is being sent to mining pools because of the increasing difficulty of successfully mining a block. By joining a mining pool, individual miners greatly increase their chance for profitability at the cost of sharing their profit with the entire pool. These mining pools have led to the majority of hashpower being concentrated in just a few places and in just a few pools. This leads to a centralization effect that directly violates one of the main principles of Bitcoin and cryptocurrencies. Blockchain-free solutions such as DAG aim to solve this issue. Through the key role of individual transactions coupled with the speed at which transactions are processed, DAG provides less power in a technological sense to miners.

Advancement of Quantum Computing: currencies such as Bitcoin run based on cryptographic “puzzles” that are hard to solve with current hardware. As technology advances, how obsolete will these “puzzles” become? This is a long-term issue with cryptocurrencies and won’t be the source of any near-term panic, but it is an issue that must be considered over the coming years. Tangle (DAG) transactions aren’t confirmed using the same “puzzle” functions as Bitcoin and thus aren’t vulnerable to this issue.

Division of Participants: In many blockchain applications, participants are divided into several different categories/roles. These roles can lead to fundamental differences in opinion and thus, can result in more conflict in the network. This conflict needs to be solved and will require the use of resources to do so – time, hashpower, money, etc.

Limit of Scalability: The nature of blockchain technology and the usage of block confirmation can result in both long-term and short-term scalability issues. You’ve probably heard quite a lot about the Bitcoin scaling debate, segwit 2x, bitcoin cash, etc. These forks on the Bitcoin blockchain are aimed to solve the scaling issues associated with Bitcoin. If these issues are left unsolved, we’ll see rising issues of transaction fees, long transaction times, “clogging” of the network and even decreased security.

Hardware Scaling Issues: This topic is related to that of the centralization of mining. The costs associated with mining hardware are on the rise and are subsequently raising the cost of entry to the mining space leading to centralization. The less discussed costs associated with energy usage and global footprint are also issues. If the number of cryptocurrencies and usage of them continue to rise, this global footprint will increase and cause even more issues.

Iota deploys a mechanism they call “Tangle.” Tangle is based on DAG technology and is at the heart of the Iota ecosystem.

IOTA’s mission is to be the backbone of the internet of things (IoT) and bring about what they call “The Economy of Things.” IOTA makes it clear than in order to create an efficient ecosystem where people will actually interact with the IoT, there needs to be low or no transaction (tx) fees.

“In this new autonomous Machine Economy IOTA will be the backbone. The Tangle ledger is able to settle transactions with zero fees so devices can trade exact amounts of resources on-demand, as well as store data from sensors and dataloggers securely and verified on the ledger.”

ByteBall aims to create a widely adopted smart payments network that touts a plethora of use cases, made possible with DAG technology:

“Mass adoption requires wide distribution, that’s why 98% of all bytes and blackbytes are to be distributed for free.

Part of the Bytes will be distributed as cashback for purchases at the merchant stores we partner with. In most cases, the offered cashback is 10% of the purchase amount. Fill out the application form or contact us if you run a store or a payment processor and want to be part of the cashback program.

Created to be “The Most Usable Cryptocurrency In the Universe”, DagCoin aims to deliver on a fast and scalable network with almost zero transaction fees by deploying DAG technology.

“We love Bitcoin, we really do… but what we all need is a cryptocurrency that gets faster every time a new transaction is made. Not vice versa. Bitcoin just gets slower… and slower. And this is exactly why we created Dagcoin – to become one of the fastest and most easy-to-use cryptocurrencies in the universe.”

Is DAG the future of cryptocurrencies? Can DAG compete with blockchain technology? Do DAG and blockchain even need to compete, or are they to have totally separate and/or interconnected use cases?

Time can only tell what these technologies will be used for and how they will interact with each other. DAG and blockchain accomplish similar goals with different techniques. There are tradeoffs to both and there many developers on both sides – though it should be noted that there are significantly more developers on the blockchain side.

As long as people see value in DAG, it should get some steem (pun intended)

Have you read anything about Hashgraph? It looks like a good state based alternative to the blockchain which could in theory both be faster and less intense on the cpu/gpu/disk/mem instead replacing them with the time to communicate with peers. Or at least as I understand it from skimming their whitepaper, I haven't fully read it yet myself.

I haven't read a ton about it yet, but I have a basic grasp. From my understanding, Hashgraph is built on DAG technology ("The data structure is a directed acyclic graph, where each vertex contains the hash of its two parent vertices." as stated here: https://en.wikipedia.org/wiki/Hashgraph).

It could be a great alternative to blockchain, but the issue is that the technology is currently not open source which makes the likelihood of actual implementation to cryptocurrency not very good.

I'm going to have to do some more research on hashgraph to give a better answer, but you should check out this thread: https://www.reddit.com/r/Iota/comments/79ncwt/is_hashgraph_just_another_version_of_iota/

It does a pretty good "fly-by" of what Hashgraph is, the issues with it, and how it stacks up to iota.

Thank you for the reddit link, it really cleared up some of the basic differences that'll have me stick with IOTA over HashGraph. Though they may even be used for different purposes I think all blockchain and DAG implementations, or most, will probably end up influencing the structure we use as a ledger in the future!

Np! I totally agree that they will be implementations of some kind in the future. To analogize this, I think of Blockchain and DAG as early versions of an ever-growing network of decentralized use cases. I think we'll see a lot of interest and development over the next 3-5 years in this space. Large institutions and governments are going to be forced to look into this space because of the benefits they bring and the markets they will disrupt - which is, in my opnion, nearly every market/industry.

Congratulations @khaleelkazi, this post is the forth most rewarded post (based on pending payouts) in the last 12 hours written by a User account holder (accounts that hold between 0.1 and 1.0 Mega Vests). The total number of posts by User account holders during this period was 2696 and the total pending payments to posts in this category was $2168.11. To see the full list of highest paid posts across all accounts categories, click here.

We love Bitcoin, we really do

Excellent explanation. Thanks. The thing I can't wrap my head around is "no mining." So how are coins created and what gives them value? Also, "Bob correcting the occasional error" seems like it could introduce its own kind of scaling problem at some point.

Here's one I wrote about the blockchain... not that it will tell you anything you don't already know.

I appreciate the kind words, thanks for tuning in! I'll definitely check out your article and let you know what I think!

Coins aren't actually created, they are simply "defined" at the inception of the network. The value of the coins are derived from usage/demand of the network just as bitcoin is defined by the number of people who buy bitcoin as well as what they're willing to pay for bitcoin. I included a short passage from the DagCoin whitepaper that will help explain this below.

If you're interested in reading more about this check out the DagCoin whitepaper, it's packed with really good info about DAG-chains. Here's the link: https://dagcoin.org/whitepaper/

Bob = "witnesses". Witnesses are elected by the network. Ark is a good functioning example of how witnesses can function in a network, even though it's unrelated to DAG (or even consider how steem witnesses keep the network in order). 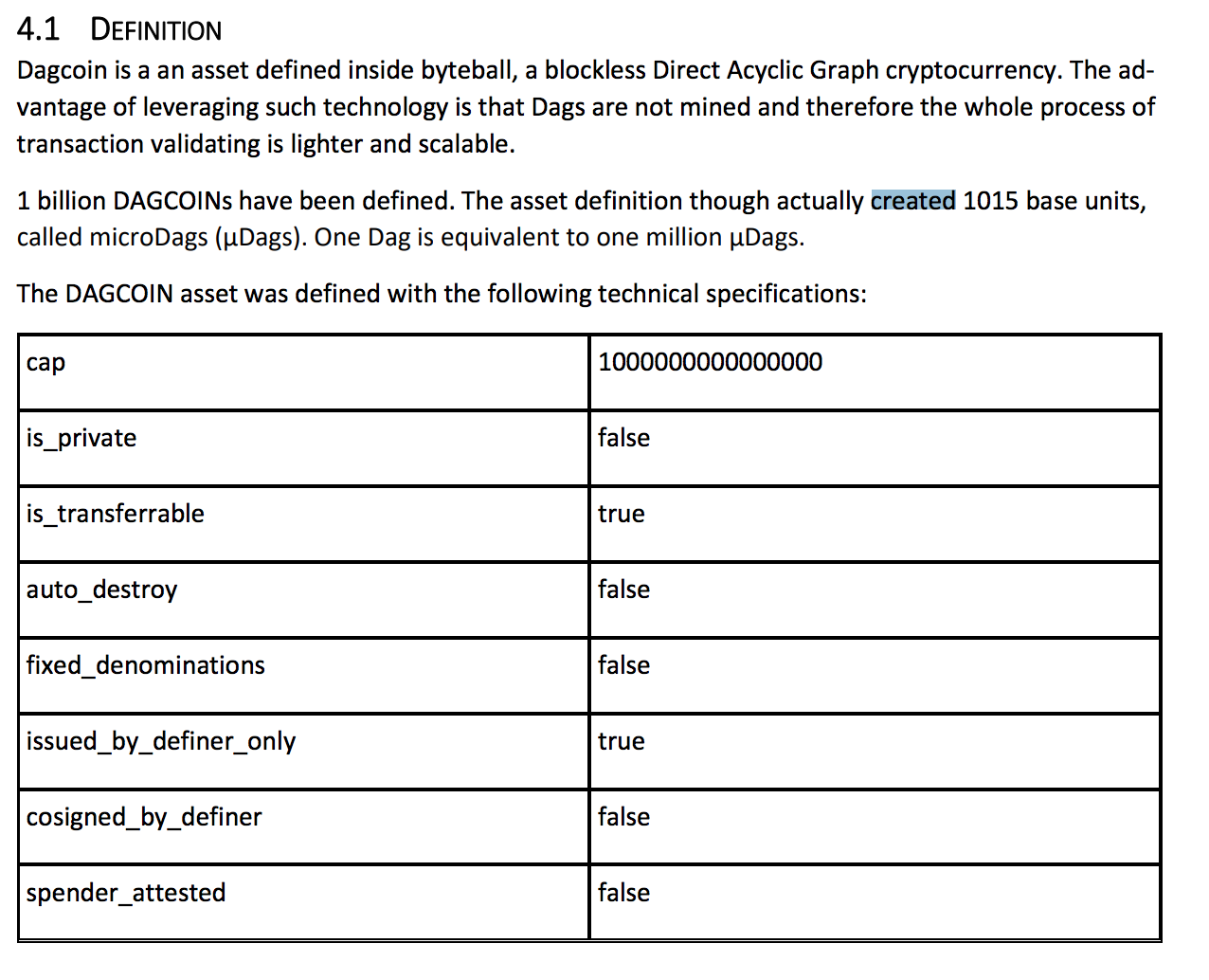 (from the dagcoin whitepaper)

This post has received a 25.91 % upvote from @upgoater thanks to: @khaleelkazi.

This post has received a 17.30 % upvote from @booster thanks to: @khaleelkazi.

Yobicash is a cryptocurrency based on DAG chain so doesn't have the scalability issues associated with blockchains.

Yobicash is a cryptocurrency built to secure the storage and sharing of data by ensuring the main properties of information security: confidentiality, integrity and availability. To enforce these properties, Yobicash employs cryptographic protocols, data replication, economic incentives and a DAG chain of transactions.

The cryptographic primitives and design are described by project designer Christian Nyumbayire in the Yobicash whitepaper first published in October 2017: https://yobicash.org/whitepaper.pdf

This post has received a 28.57 % upvote from @upmyvote thanks to: @khaleelkazi. Send at least 1 SBD to @upmyvote with a post link in the memo field to promote a post! Sorry, we can't upvote comments.

This post has received gratitude of 12.94 % from @appreciator thanks to: @khaleelkazi.

Do you have an article about DAG vs Hashgraph vs Blockchain that pinpoints pros and cons of each other? Thanks and more power...