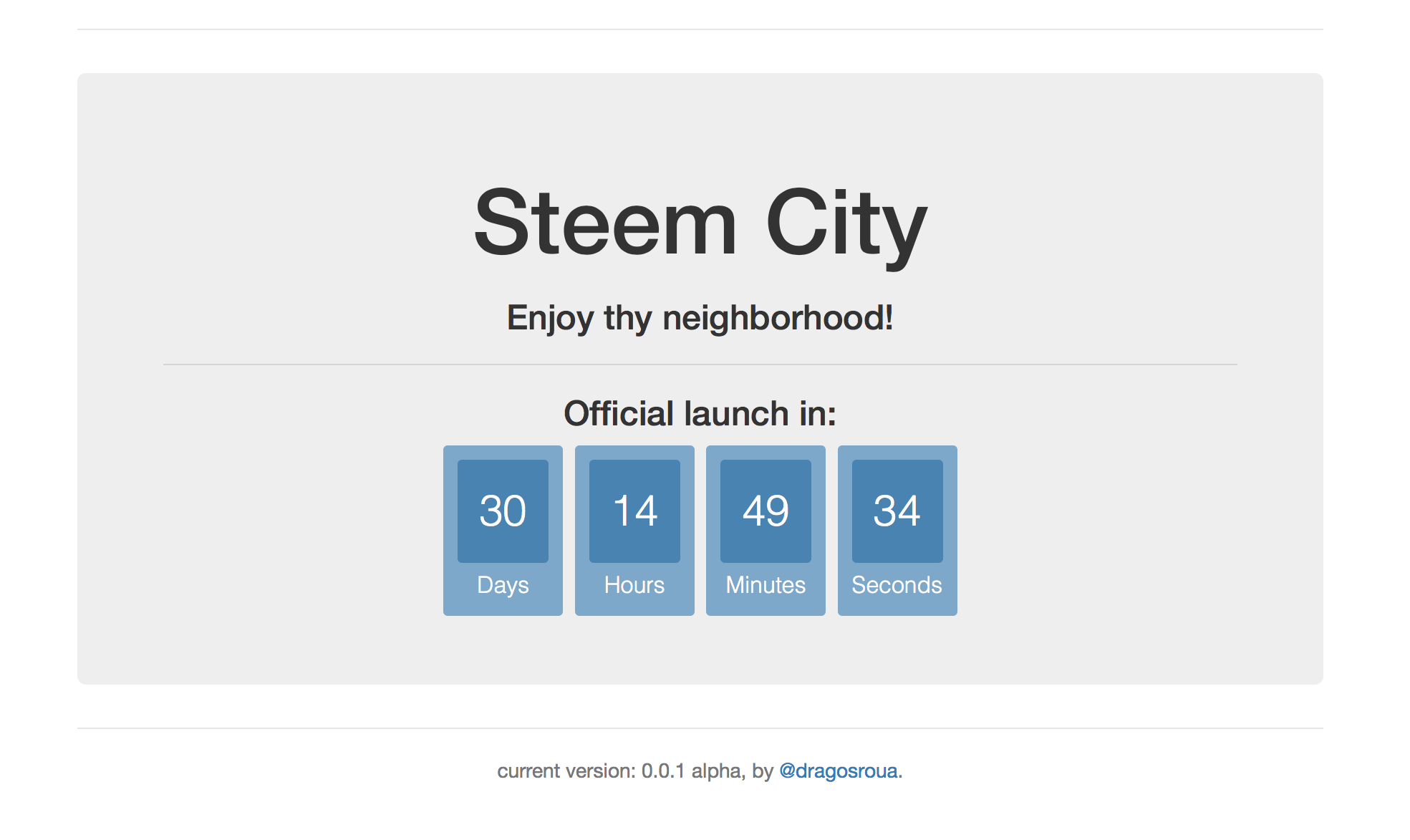 I've been drafting for a while some specs for a new way to ingest and digest content on top the Steemit blockchain and today I'm announcing the project which I started to build around this research.

Steem City is a project which taps into the community aspect of the Steem blockchain. It's still in a very early stage, as I said, barely drafting specs, but following the path of steem.supply which grew very fast as a result of user feedback, I thought it would be a good idea to announce at least that I'm working on something related to the community aspects of the Steem blockchain.

Because the nature of the project involves some heavy testing, I'm looking for early alpha testers. Testing will involve posting on Steemit from a different interface and tweaking some basic parameters (including the split of rewards).Just leave me a comment and I'll add you on a list.

If you're not interested in becoming an alpha tester, just bookmark the url: steem.city, prepare for the official launch (tentatively in 30 days from now) and carry on.

I'm a serial entrepreneur, blogger and ultrarunner. You can find me mainly on my blog at Dragos Roua where I write about productivity, business, relationships and running.
For the Steemit ecosystem I created a free tool for checking your potential rewards at steem.supply.

If you appreciate my contribution, you can vote for me as witness here:
https://steemit.com/~witnesses
#steemcity #community #rewards
4 years ago in #steem by dragosroua (74)
$248.19
Reply 39

I would like to test it out as well :)

Thanks for sharing! A link to your post was included in Steem.center wiki page Steem Ecosystem:S-Z. Thanks and good luck again!

One nitpicker here... You want also mobile? That I cannot do ATM

No mobile atm. Join the Slack using the link in the post, that's where I'll be posting updates.

What's this project about? Will it be somewhat same as Steemit content publishing and blog or enhanced version of it? Count me in. I resteemed and upvoted. Very interested in it.

Nice, I would love to test it.

Count me in on this mate. Thanks for sharing this opportunity

I'd love to test the platform!

Just tested steem.supply and realized STEEM increased another 40 cents. OMG who can catch up with that! Nice tool btw.

Not for me, but I am interested in the project and I resteem(ed)it.

Provided it's not an extreme "time-sucker," I would be interested in alpha testing... ;) Always curious about what you're up to. :D
😄😇😄

Same here @dragosroua - I have nothing but time on my hands these days . . .

i want to beta test

Wow!
Love to ride in a city!
I'm waiting @dragosroua!

Hey man id definitely love to help you out and test your new platform.

Please add me on your list thanks!
Im emerge as well on SteemChat

I am happy to help you with this project ;)

Hey, cool. I don't have any programming skills, but if you would like to add me as a tester I wouldn't mind running some tests.

Hey, I'm ready to join.
Thanks

Please count me in as well :)

I'm in for Guinea pig testing 😄

I'm a good bug hunter, so put me on the list.

No me lo quiero perder!

I'm on board for testing. I break things well.

That's really nice. I can't do programming but I can help with UX with need it. Count on me.

Add me please.
Together we are stronger & we will fly higher,

Good luck on this project !
Users are working on making this community bigger and better the way they can . Thank you for this !

I could give it a test.

Sounds interesting, any further information? How are you planning on breaking up the testing? Thank you all! If you have a different nickname in steemit.chat, please reply to your own comment with that nickname so I can identify you there. We will be in touch primarily through the chat. Expect the first battery of tests to come in approximately a week.

Again, thank you for your support!