On Tuesday 20th of June, Steem beat the world record for number of confirmed transactions in a 24 hour period. As far as I can determine, the previous record was just above 600k transactions, and it was held by our sister network BitShares. 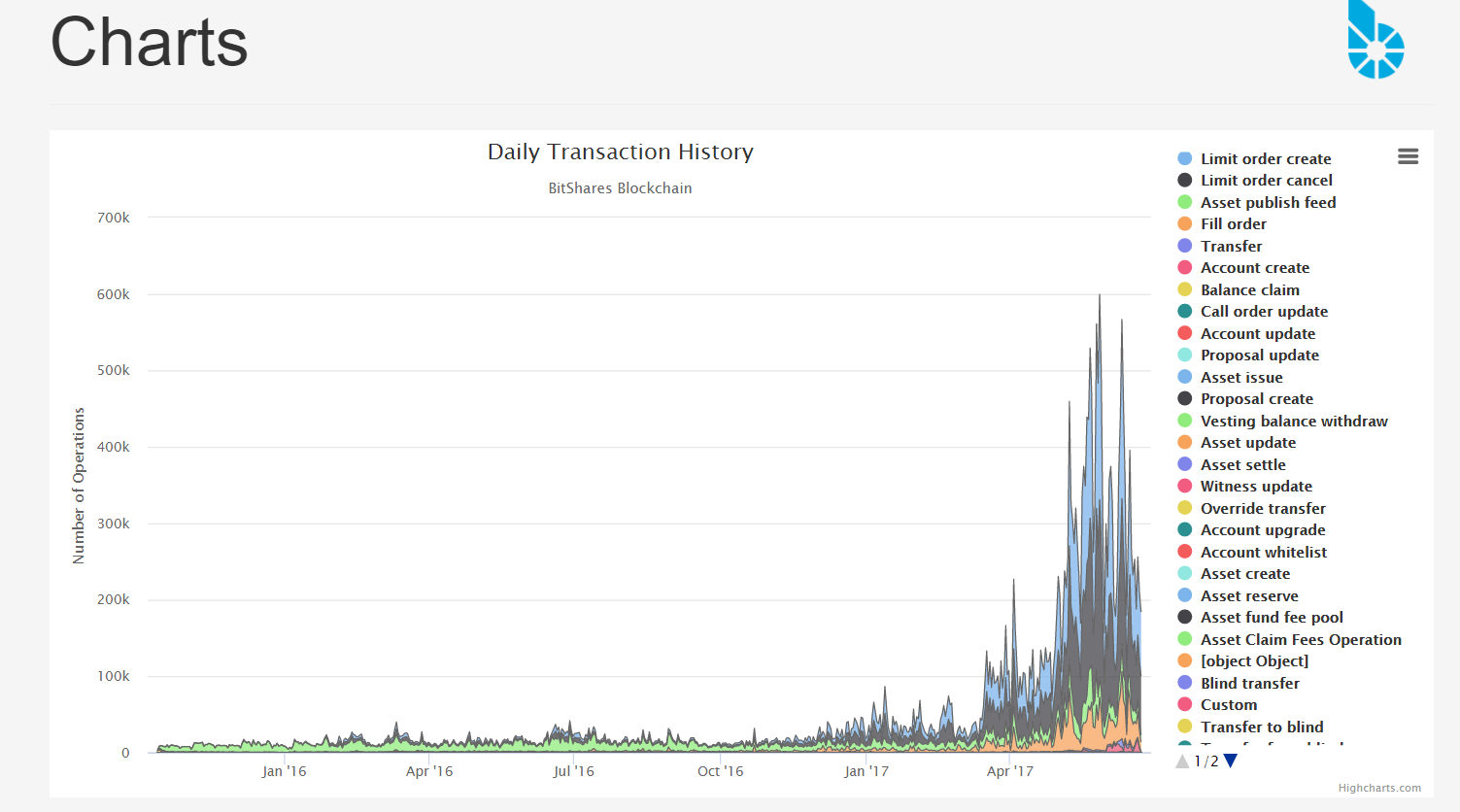 In comparison, Bitcoin has never broken 400,000 transactions in one day.

Ethereum managed to beat Bitcoin recently, but it's record is lower still.

Can anyone find another blockchain being used in production making more transactions in a day?

Edit: On further information, it seems the record we broke was Operations Per Day. Transactions per day is a fair bit lower on BitShares than the graph suggests.

for the last week it only continues to grow. Awesome!! thnx to all of you out there!

Steem blockchain continue to clib against all odds reteem That is fantastic. On our way to being up their with FB and the boys for sure. :D

Are this only transaction with Steemcoin in it or what is included in this?

This is every kind of transaction on the Steem blockchain.

The comparison is not exactly like for like across all blockchains. It means something different on every network. But only Bitcoin and the straight clones are limited to 'transfer' type transactions.

Steem blockchain is creating history by handling such a huge volume of transactions....

At some point youd think the big media companies will be buying steem power to get eyes on their content. So many ways Steemit can grow.

thanks for this amzing post and the stats you always help of all steemian thanks again , upvoted

What? Steemit is off the hook. Thanks for sharing.

That's awesome news! Thanks for brightening our day, upvoted!

A good news that reflects my recent post today on how steemit will rule social media, check it out..wow, thanks for sharing

Another record breaking day on the blockchain, I'm sure it won't be the last :)

You know what that means @demotruk... huge opportunity and success of steemit 🙌🏼🙌🏼🙌🏼

sorry to spoil the upbeat , but there are still questions to answer https://steemit.com/steem/@lightproject/did-last-hf-just-prove-steemit-is-regulated-not-decentralized

The devs only write code. It was only with the consensus of the network (via witness who are elected by stakeholders) that the change went through. The same consensus mechanism blocked HF17, proving that devs can only propose changes, not force them upon the network.

Is steemit then a Pseudo-Oligarchy Model?

It is a stakeholder governance system where block producers are representatives elected by stake-weighted voting while fiscal policy is decided directly by continuous stakeholder vote.

Do we have any info/chart/statistics about wealth distribution? For instance, would be interesting to know how many hands hold 80% of steem wealth, and how interconnected those "stakeholders" are. Thanks for your time!

Yes, steemwhales.com is useful for that. There was also a series of posts on stake distribution trends but I haven't seen one recently.

The good news is that it should be able to handle over 3000 tx per second. Bitshares, the older brother has been tested to such an amount.

fab news. the only way is up

So Many People are just discovering STEEMIT and there is a waiting line to become a member. That bodes well for the Future of this Social Community.

Yes, it will be interesting to watch this puppy take off.

These numbers are amazing! Thanks for sharing.

@demotruk Thanks for the update.

wow, I am so pride of myself to be part of this record!
Next step will be taking over other social medias like Facebook, Twitter, Instagram, LinkedIn, etc.
Is this a result of HF19? Probably related, but not 100% due to it.
Fellow Steemians, please kind on posting posting posting, enrich Steemit with your content, please!

I suspect that HF19 has a lot to do with it. When people start to see their voting strength increase, it's good motivation to create more content.

Rather coincidental that it was on the same day...

Steemit is growing, more and more people joining and that's an excellent thing

Thanks for the insight. Haven't heard of any higher tx/day to date, but it's surely a key metric to watch.

Yoo!!. this is good work, thanks for the update

Steem is going to the moon this is possibly the greatest thing to happen to the Internet. Steem is changing lives daily opening up endless opportunity for people. I thank everyone in the community support the movement that I'm also lucky to be involved. Steem all the way; nice post 🙏🙏

Did you do an introduceyourself post? Link me here when you do.

No I haven't made 1 now that you mention it, I'm going to create one over the next day or two to post. I'll give you the heads up and hit you when I do. Thanks for the advice brother 🙏🙏

It feels big because it is big. All those other blockchains are either not doing or failing to handle transaction loads of this level.

If we measure transfers only, we still have a long way to go. We're approaching 5000 per day now, compared to Bitcoin's >300,000 per day. Even that comparison is messy because in Bitcoin there is a need to consolidate transaction outputs, move between separate wallets etc. which is not necessary in Steem. Even by transfers only, it's likely we will pass billion dollar networks like Litecoin fairly soon.

On transfers alone, we are already on par with Dash - all transactions. That's a billion dollar blockchain, and they have many more than just transfer transactions as well.

I am new to the world of steem, and the truth is not much about coins but these post are really good, help you to understand more about this world, greetings

Great news ...buy & store the steem ..one day you will be millionaire

Wow amazing and it's more amazing that I heard of Steemit only this month :). This is a sleeping giant

I am honored to be here and participating. Bless!

Can you say: exponential? Bitshares still holds the record. 680,000 transactions in one day set in May. https://steemit.com/bitshares/@steempower/bitshares-state-of-the-network-23rd-may-2017

Hmm, both using the same charting site. Do you know why the chart now only shows a little above 600k as the peak? I selected to include all transaction types.

I don't, I can't look at the site right now but cryptofresh is known to be very buggy.

It seems we might not be measuring the right thing with the Cryptofresh chart anyway.

It means a problem with my post one way or another. Either we still haven't beaten the record or the record had already been beaten.

This is the kind of news you want to hear about! GREAT! It's catching on! You think this is big now? Wait until we get a platform like SteemQ to go live. BOOM! 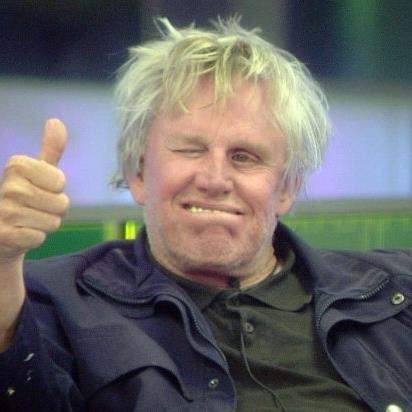 @demotruk, does every upvote count as a transaction as well? One question I have though is what does this tell me about steemit other than that it can handle a lot of transactions? Thanks

Yes, every vote is a transaction. You can see a pie chart of the different transaction types and their frequency here

Aside from proof that the network is smoothly handling load of a level that others have difficulty with, it also shows that Steem is the blockchain with the most user activity (where bot actions are included as user actions, they are by proxy anyway).

The more I am looking into this, the more I understand the importance of it. Looking into EOS right now. Very interesting concept.

@demotruk, makes sense. What would interest me even more are there any official numbers on traffic? That would be very interesting for me.

@gavvet has written many posts on it. There's also https://www.alexa.com/siteinfo/Steemit.com

@demotruk exactly what I was looking for, thanks for sharing. Alexa is very missleading...

Alexa has errors because of their sampling methods, but it gets more accurate with larger numbers (larger population areas, larger websites). It can be good enough in many cases.

@demotruk, agree... usually a website with a tech savvy user base ranks quite good on alexa even with low traffic. Thats why I was interested in some real data.

Is this for real its becoming reality enjoy a new sucess

This is very nice indeed!!

And this is only the beginning!

This is awesome! Thank you.

Thank you very much for such a wonderful post. you are really doing well my friend. Keep up the good work.

How about next week, whether it will continue to rise or vice versa