STEEM - Still sitting on the support line at 2$ 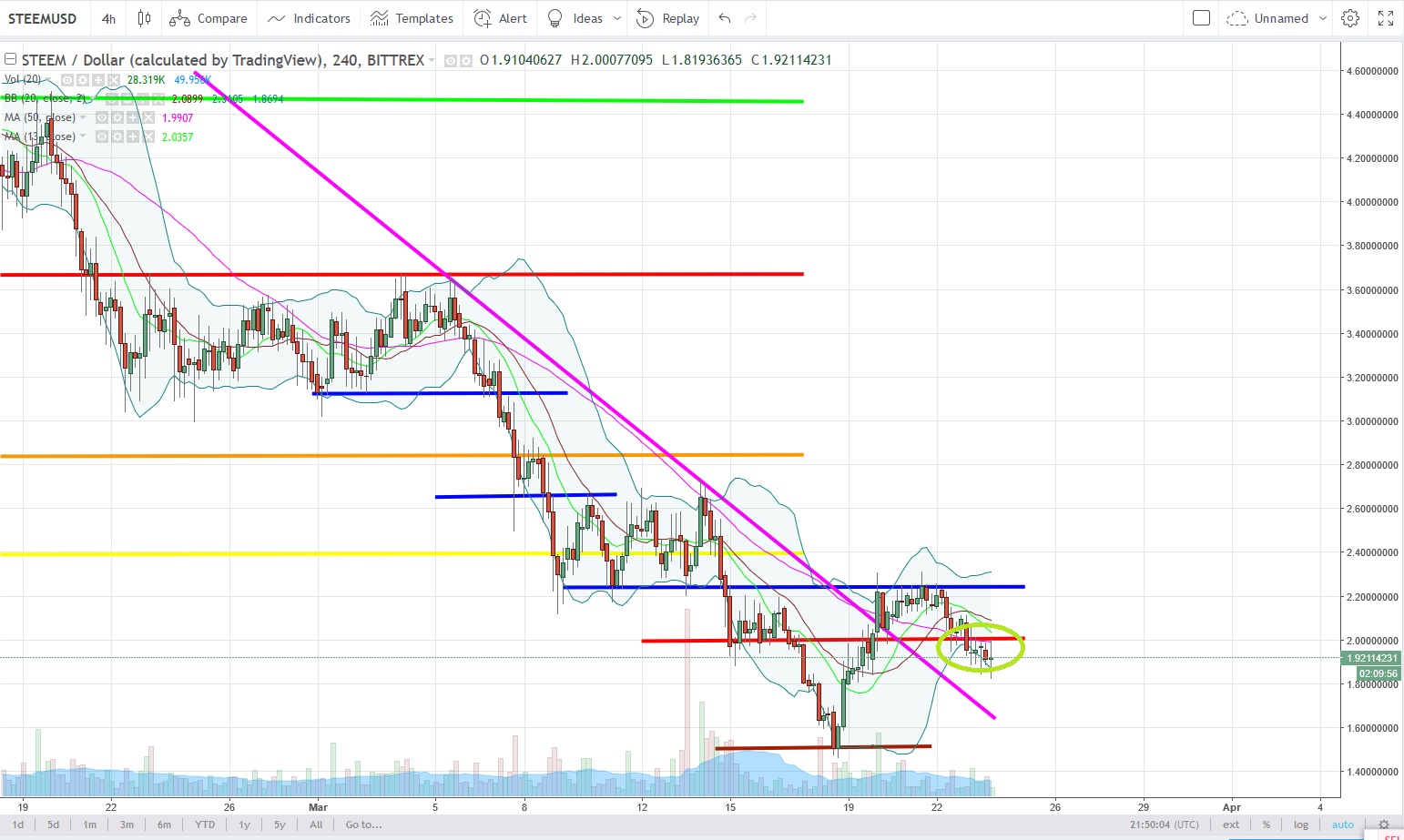 The support line looks very strong but we have also difficulties to take some distance from it. This support line must hold us during the coming hours and a UP move should come and go test the next resistance line around 2.25$. Any confirmed break of our support line at 2$ will invalidate this scenario so keep an eye on the current situation before any trade linked to the objective around 2.25$.

I wish you massive profits,
Cryptopassion.io

Disclaimer : Never invest more than what you can afford to lose. This post is my personal opinion, do your own research before making any investment decisions. If you make any trades after reading this post, it is completely in your responsibility. I am not responsible for any of your losses. By reading this post you acknowledge and accept that.

Interested to trade your cryptos like a Pro ?
As a trader, I recommend you the trading platform Bitfinex
10% discount on your trading fees for 1 month via this link !

You prefer simply exchange your crypto with the lowest fee possible ?
With my daily exchanges of cryptos, I can recommend you the platform Binance

I hope steem goes to $10 before the end of next month. :p

I have an order placed on Binance at 0.0002141 BTC, I'd like steem to come down a little bit more for a while, so I can get my hands on some more at a knockdown price ...

I don't know how to interpret the charts but i saw that Steem and SBD are dancing around 2$ and in my opinion that's what you are saying as support line of 2$, and i am trying to understand the in and out of Cryptocurrency market by learning the trends so that in future when i grow then i can also take the benefits. Thanks for sharing this post with us and wishing you an great day. Stay blessed. 🙂

Steem is taking over😀

What is the different between bittrex and bitfinex exchanger.

Congratulations @cryptopassion, this post is the tenth most rewarded post (based on pending payouts) in the last 12 hours written by a Superhero or Legend account holder (accounts hold greater than 100 Mega Vests). The total number of posts by Superhero and Legend account holders during this period was 55 and the total pending payments to posts in these categories was $2451.55. To see the full list of highest paid posts across all accounts categories, click here.

the risks will always be in the negotiations, with things to investigate and see the trust and the benefits that can derive from you. in this world of crypto is ironic because it gives a lot of money or cost to loan money to a brother or friend for some investment ... but we get a trust with these digital things that even if we are not sure we invest or risk

yeah what you said is true . I do agree with your analysis . we are sitting still strong on 2$ line but the breakout in btc helps us a lot :)

I think the next weeks move of Steem up or down will depends lot on Bitcoin movement....But you chart showing Steem may be start of a bit reversing trend at least trying very short term.

Yeah... True fact.
Thanks for the update. Nice post. Quite informative, educational and well-detailed. Very useful as well and updated. when ya think about increased

Yes, I truly do agree. It simply does not look good for SBD. All the signs point to continued declines. We need some really powerful news in the crypto world to reverse the downward trend. Thanks for sharing.

I wish my finances weren't so tied up right now - I'd love to pick up some SBD right now - great time to accumulate. I keep think of trading sime if my alt coins for SBD - but as soon as I do - but I'll be kicking myself in the ass when they go gangbusters over the next few years. Great article ...I'll be following...

I exposed @berniesanders for what he really is in my posts.

Just take a look at any of my posts (which I HAD to spam constantly to drain his VP and also to get the exposure I needed) and you can see just how far the abuse goes by @berniesanders.

He even got lazy at one point in making alternate accounts to abuse with and made "nextgen-InsertNumberHere-" accounts!

Please, do your due dilligence and check out, not only my posts, but his steemd track record on upvotes/downvotes. He's got many many more accounts than just the ones I've found, I'm sure, but those were only the ones that I could PROVE were his beyond a shadow of a doubt (based on voting/downvoting patterns, delegations, transactions, etc!)!

The real abuser here is the one who cries "ABUSE!!" the most, it is, none other than the inbred, cousin-fucker, that is, @berniesanders! :))

Here's a link to one of my latest posts, showing @berniesanders' alternate account list! I believe it's STILL growing.. which is sad.. He truly is a sociopathic dipshit! Let's take this fucking piece of shit out, together! :)