I will Flag all spammy comments

There is a saying in my country that says "Guerra avisada no mata soldados", it basically means that if you let people know what you will do they can take precautions so that they are not affected.

I believe that spammy comments are becoming a problem in Steem, I have let them pass but I will start flagging them from this point forward.

Here are some examples that have appeared on my posts recently:

I must admit the last one had me excited for a minute, until I realized it was sent to almost everyone on Steemit ! lol.

So, you have been warned, take your spam elsewhere because it is really annoying!

They are becoming a real problem! I posted on this a bit yesterday, but had the feeling it bothers me more than most people, but maybe not than you. A real issue is that these accounts area actually earnings rewards for their copy/paste robo comments, if they continue to get upvotes they will continue to spam, and more and more of them will arrive. It's much easier than actually reading the material and having a thought. Downvoting is good, and all we can do individually...but the problem really needs to be fixed in the code. Cheers

I think it is kind of hard to code this one in, manual is better as a computer can not distinguish normal comments from spam comments.

Comments that are identical and posted frequently I think are always spam, maybe it only removes 20% if you stop allowing that, but its still 20% less. Example below: 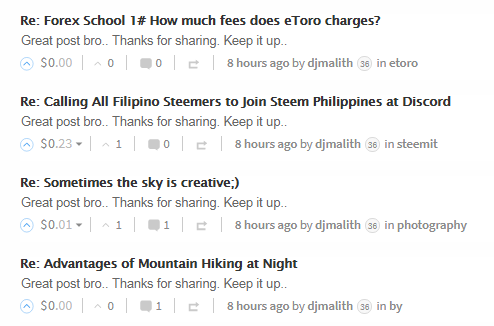 djmalith doesn't seem to be a bot however.

Probably a guy that want's to earn some Steem here but isn't very good at writing.

Not a very good strategy to create quality content but it does give him some followers.

I think it's better to give these kind of users a warning that Copy Past posts aren't very helpful to the platform.

Yo're right, he might not be a bot. But I don't think that saying that he isn't good at writing should be an excuse. We should remember that Steemit doesn't have moderation and if we will not do anything about it we will drown in shit like this.

This is a good thing to do! I've seen so many spammers lately, but luckily they are actually pretty easy to deal with by flagging; only a few powerful flags and their reputation will be destroyed.

The second comment is epic. I love you @chitty haha who's gonna fall for that. LOL

Congratulations @chitty! You have completed some achievement on Steemit and have been rewarded with new badge(s) :

I am seeing it more and more in my posts too. I have also seen a few of the same faces over and over as new, individuals with multiple names. Interesting how some people just have to go in that direction. I agree, if we see someone abusing the posts constantly, a flag would be appropriate. Great post @chitty

I agree with you, "spammy comments are becoming a problem in Steem". Your precautions messages are useful for this platform. These would much help us to think before commenting and that would certainly create positive comments as well. Steem on! ;)

I agree. It starts to piss me off to. Recently I wrote a medical article in polish and some dude commented "great article, thanks for sharing" in english! It is obvious that he didn't understand a word I wrote! I don't think it was a bot, so it's even more annoying.

Good point. I'll try to think about a way to cope with this on a wide scale. I think I might have an idea. I'll try to set this up soon. Take care @chitty!