Hey everyone. Aggroed here. I'm pretty excited. I just picked up some new equipment to get some video content made. This is an early stage action of trying to put together a complete studio I'm calling PAL-Studios. I've started today with a Sony FDR-AX100. I know it's oversized and over priced from where I need to start, but I'm trying to future proof myself a little bit by having a camera that could conceivably take footage for indy media above and beyond talking head videos. 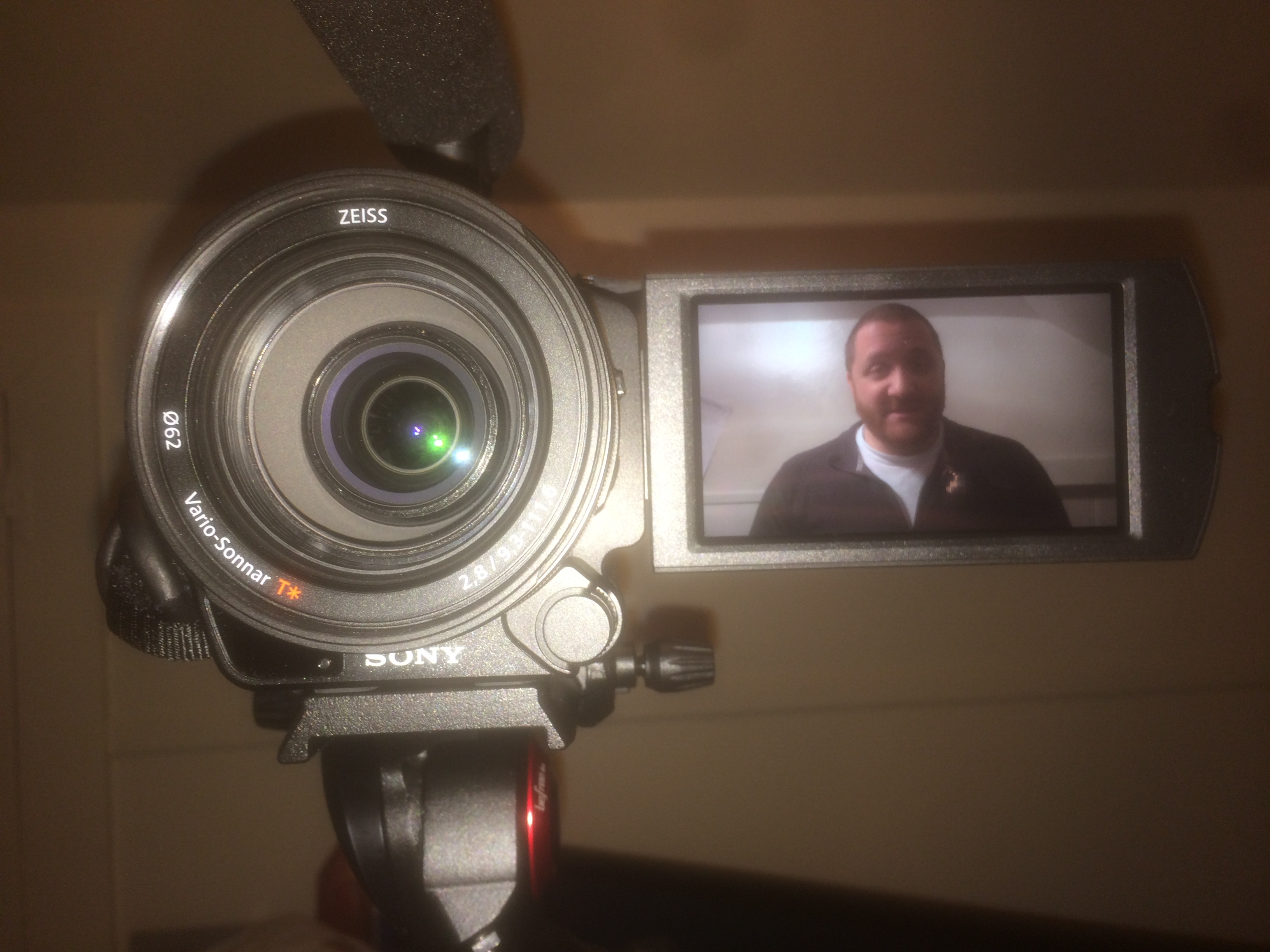 I purchased a tripod. THis is the Manfrotto 290. It has a ball bearing head which makes for some steady movement on the tripod. Again, way more than what I need for a talking head video, but for skits and other media I think it will be nice.

I topped the camera off with a SONY Gunzoom microphone. I can hear the difference between the onboard mic and a more professional mic. This one sounds pretty good. Other mics are somewhat more standard in the industry but SONY decided to make it proprietary on the quick connect on the top and now standard mics don't work on it. You have to buy SONY... fuckers...

I have some small scale lighting which I picked up from Best Buy, but I'm pretty sure I'm going to upgrade that with some lights by Cool Lights.

I'll need a new computer, a desk, a chair, a lease, and a internet access point from the warehouse still. I'm getting closer.

As I mention in the video the plan is to continue to create content that will spread the message of Peace, Abundance, and Liberty. You can expect a fair amount of it to be snarky towards the status quo. Should be fun. Please stick with and stand by me as we move into a new evolution and bring a media production studio to Steem for the Steem community!

Awesome, any way The Block can help, give us a shout.

shooouuuuutttttt. awesome shot bro... i wanna buy a camera too.

This is awesome and inspiring! Keep up the good work!

Looking forward to seeing what you put out. Sounds like it will be a great message. Peace, Abundance and Liberty all the way : )

The world would look a lot cooler this way for sure!

I totally agree with you @aggroed.

I know nothing about that camera but it looks like it can go beyond revealing pores and into atomic-bond resolution territory. Nice pickup.

Wow, this is exciting @aggroed! You'll be producing Indie films awesome. I am seeing your bright future in film industry! :)

Great initiative and wish you the best of luck with it. I would love to participate, such a shame you guys being are in the US and I am in AU. Look forward to seeing more.

Any tips or helpful tricks to get started on Dtube? Just today someone was noting the poor quality of my photographs and I was considering upgrading my gear as well.

@aggroed pretty wicked gadgets you got there. Can't wait to see the finished products from it.

Great news! I am sure it will work out and grow at a decent rate, steemit is filled with talent! Good luck! I am also in the process of creating a small studio, I have part of the equipment and software, few tests and will be up and running. Take Care

Well, let me know what your plan is and how you're doing it. I'm interested.

So I am already renting a place for my business and have a spare room where I set up a sort of club I called @steemlab where high school kids come and use the computers to discover steemit and create post and also discover the crypto world while practicing their English (3rd language).
So I recently purchased and brought in:

But the idea now is to get kids to unleash their creativity while providing them with the tools required to do so. Dlive is now up Dtube is doing well, Dsound etc.

I will be also using this station, mini studio or whatever it is.. to make good quality videos where I will announce news from steemit and interview some steemians of interest.

I am new to this so I am testing out the equipment and the ins and outs of video editing and broadcasting tools. But I should be able to get things all worked out before the end of this month.

I will keep you updated and will make sure to use PAL for guidance in case I need some assistance, I am sure there are few experienced fellow steemians in these matters.

Come message me in Discord (minnowpond.org)

Excellent news and great video, the sound quality was really good, I think you've fallen in love with being in front of the camera!
Was that a touch of blusher and eye liner I noticed ? ;-)
I loved the sense of excitement you purveryed, like a big kid with his new toys !!
Look forward to future videos and extreme snarkiness :-)
Best wishes

That might be a really good idea getting the college students involved. You may even be able to use the college facilities if you do that which may end up working out pretty good for you. Good ideas!

I wish you the best!

Wow that's great... you are becoming a media giant!

Wow loved your post...loved reading it....it's amazing....thank you for sharing have a good day

The camera is a very good friend, producing a very high quality picture. I am very happy to see it. Good luck with your new camera. Thank you friend.

Those are very nice but expensive equipments, hoping to follow you every step of the way as you share your wonderful images and moments.

Sounds like you are putting together some nice kit. Maybe at some point when you get everything sort of put together, you could make a video of your setup? I think many here might find that intriguing. Looking forward to any of your content.

Only thing I would like to suggest you, put a little bit better lighthing.

Just a little tip to make it better.

And since you're making money with making video, I don't think it's too pricey.

Just think of it as an investment.

Yeah. that was just a shitty overhead light. I have lighting that I haven't even taken out of the box yet.

Bringing to reality a large part of the objectives we have proposed, such as a study for videos and photos, is wonderful!. I congratulate you for executing one of your objectives and we are waiting for the photos or videos

Holy wow am I actually finally seeing what you look like???
I can't play the DTube video though because my computer hates me.

because I quit my job and now idgaf.

I can't wait to watch your videos 😉

When it comes to video recording sony camcorders are really good at doing the job.
I would prefer Rode shotgun mic to use with the camera but looks like Sony doesnot want any other companies item to be used with its item.

I always look forward to your content. I’m in the PAL discord group for just over a week now and have met some great people there. You are doing very important work by leading this positive movement. It is very appreciated!

Congratulations, your post received one of the top 10 most powerful upvotes in the last 12 hours. You received an upvote from @thejohalfiles valued at 276.35 SBD, based on the pending payout at the time the data was extracted.

Congratulations @aggroed, this post is the most rewarded post (based on pending payouts) in the last 12 hours written by a Superhero or Legend account holder (accounts hold greater than 100 Mega Vests). The total number of posts by Superhero and Legend account holders during this period was 28 and the total pending payments to posts in these categories was $2012.45. To see the full list of highest paid posts across all accounts categories, click here.

I like your posts , they are very useful . i am following you and upvoted some posts and resteemed them . thank you .

After YTs recent announcement (snub) I'll be migrating my best music videos to DTube and production of a new action movie will probably start in march. I can only convince the director to publish on DTube if there is a bigger Dutch language audience, so it will probably hit the theaters first. That leads to the next question: is there any way to find out how many Steem users there are for a certain region? Good luck with your endeavors. Greetings!

How exciting @aggroed this will be a blast for you.
I bought my first 50 mm lens this week and now I can not find my tripod so stepped out and got a new one today .. I looked at different ones and ended up getting a Sirui... has the 360 head ... I looked at the Manfrottos.. I did get a Manfrotto back pack a while back.

Anyway, it does all add up .. where are you located ..wish I could visit the studio. You are going to do great things.

What editing software is everyone using? I need to learn more about this stuff simple for the PI work I do, but it will also help with video content for d.tube.

wonderful msg dude.. give me your camera as a gift and i will accept it without any arguments.Loll..

Go for it. I'm a filmmaker. We'll be shooting a short doc in 16mm in February. Excited about it!

Wow, amazing big things ahead for you! @aggroed

This camera actually looks very good. If you want a decent quality webcam for those fast videos you might want to make at your computer, get a logitec C920. I know some news channels that do that kind of thing for a quick but still quality video when there is no news or they can't travel.

thanks for such a informative video

I love your channel man! Keep them good videos coming! (:

Hi!, welcome to steemit community. I already upvote you, please vote me back

great writing can only be written by great people