radioretrofuture (31)in #steampunk • 5 years ago

Or you can watch my more recent documentary Series, The Steampunk Beginners Guide

Have you noticed the past few years outlets like Ikea have a greater selection of Retro and Industrial and Vintage designs. These are after all terms used by Ikea and other household venue's to describe their collections of old or classical looking selections of products. However, some of you may have seen words like 'Steamy' or 'Steampunkish-looking' pass in review. Maybe you have a friend that is fond of the Steampunk visual design. Or maybe you have seen some people discussing it online? What is that all about? When is something just vintage or 'Real Steampunk'?

There is no 'Black and White' definition of Steampunk. I jokingly answer that Steampunk is a feeling. A subjective label. Whenever a fan of Steampunk likes something it is, and if the fan doesn't like, it isn't. Off course this is not very helpfully. Below is a description used on the Blog Tupperware Steampunk. But consider the article below as a framework on how to identify Steampunk rather then a actual definition.

When talking a about Steampunk, it can mean three separate subjects, that should not be confused with one another.

In the '80 a new form of Science Fiction arose, called Cyberpunk. Tales of distant futures that would inspire films like Demolition Man, Mad Max, Judge Dread, Johnny Mnemonic, V for Vendetta, Blade Runner and The Matrix, to name a few. These stories take place in the distant dystopian future were humans are enslaved by a technocratic society, often controlled by tyrannical coöperations and totalitarian dictatorships that use technology to control the masses.
Cyberpunk, as these tales are called, arose in a time when the digital age began, yet the Cold War was far from over. It instilled pessimism and a skeptical perception of technological advancement. Sure, technology was cool and could benefit humans, it also had a shadowy side. These writers seem to agree that rules had to be put in advance before introducing such technology, like Isaac Asimov's Three Law's of Robotics.

However, by the end of the '80 a new collection of stories emerged, inspire by early science fiction writers like H.G. Wells and Jules Verne. Or Horror writers like Mary Shelley, H.P. Lovecraft and Bram Stoker. They were written by Cyberpunk veterans, like Gibson and Jeter, but took place in an alternate past. But with aliens, ray guns and other futuristic machines. They became so common one writer wrote to Locus magazine. 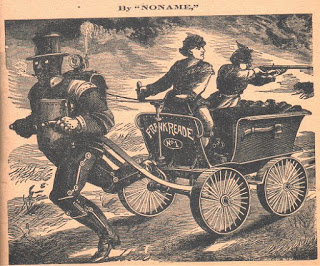 Illustration of a 19th century 'Edisonade' by Frank Reade

[Dear Locus, Personally, I think Victorian Fantasies are going to be the next big thing, as long we can come up with a fitting collective term for [writers like] Powers, Blaymock and myself. Something based on the appropriate technology of the era; like ‘steam-punks’ perhaps ]

Steampunk stories are Science Fiction tales in an Alternate History setting, usually nineteen century England.
Technologies have changed history as we know it today, often leading to Technocratic Empires (inspired by Cyberpunk) and Apocalyptic Landscapes which can only be traversed by Steampowered Zeppelins. These worlds are often described as consisting of copper and brass, populated with renegades, engineers and mad scientists looking for adventure or causing all kinds of mayhem. In contrast to Cyberpunk, Steampunk often revels in technological progress. Like in Gene Rodenberry's Star Trek technology is almost magical in making the apparent impossible, possible.

There are also fantasy stories, especially in videogames, were the Steampunk-aestic is used depict technological advanced races or civilizations in Fantasy worlds. Steampunk and Retrofuturism is often used as a visual storytelling device to explain by what historical subjects, people or machines the story is inspired. Franchises like the Warhammer 40.000 games use historical uniforms, witchhunter costumes, and World War I like machines, to depict the mindset of the human race in, "a future that only knows war". Other examples of this are Goblins in World of Warcraft, the Dwemer in Skyrim and Anatorian soldiers in Last Exile.

This genre has had a number of spinnoffs, like more Fantasy inspired tales with supernatural creatures, like vampires and werewolfs. Or stories that take place in completely fictional Worlds of Fantasy, rather than the past. While Steampunk is about the relationship between man-and-machine and what our world would look like if technology advance far beyond it's time, in Fantasy Steampunk the emphesis is on creating a Steampunk inspired worlds with wonderful contraptions and high quality fashion. These stories are generally referred to as Fantasy Steampunk to separate it from it's Alternate History counterpart; Although there are plenty of other names like Industrial Fantasy or Gaslamp Fantasy.

Retrofuturism as a Storytelling Device 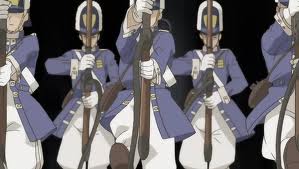 Steampunk is best known for it's wide range of creations, from toys to paintings. One of the main draws of Steampunk is it's typical blend of historical and futuristic elements. Therefore it is called a Retro-Futuristic style. But Retro-Futurism is not unique to Steampunk. A lot of mainstream fashion designer uses history as it's inspiration, like Prada and Mcqueen. Also in works of fiction, like Fantasy or Japanese Manga and Anime a blend of future and past are often used in it's visual designs. Either as a storytelling-device, or just because...
But Steampunk is clearly the Flagship of Retrofuturism, heading the charge into the 21st century. Whenever anyone sees art or objects with a obvious blends of past and future is often called Steampunk, or Steampunkish.

In practice it is very subjective. Basically anything a self- proclaimed 'Steampunk' likes is called Steampunk. Some say it has to be Victorian, others say it doesn't. Some say it has to involve Steampower, other find this arbitrary. At first glance Steampunk designs are often brass/copper and wood colored, bulky, impractical and over- the-top stylish. Steampunk often strives for Fashion over Form to achieve a certain timeless elegance that separates it from modern design, typical of today mass-produced products. Durability and DIY (Do-it Yourself) are very important to many designers, so they often reuse broken devices, the older the better, and find new uses for archaic technology. Painting of a Futuristic Airship in historical scene,
by Vadim Voitekhovitch 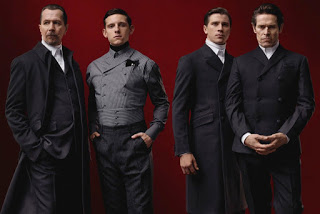 Victorianesque fashion by Prada Retrofuturistic for sure.
But is it Steampunk or Neo Victorian?

Victorian influences with Brass and Brown are also very prevalent. So much so, it that became a cliché. Now designers are putting more focus on the use of different colors in their fashion and different articles of clothing and gadgets that go with corsets and tophats.Cultural influences moved away from the Victorian-era into the exotic, usually Asian realm. The American Civil War always had been a popular theme. But now Steampunk has moved to streets of Brooklyn, finding inspiration within the Native- and African-American Culture (Steamfunk). It has also spread to Eastern Europe and Asia, and now new locally inspired themes are propping up all over the internet, most notably in India and Russia. Therefore it could be said that Steampunk inspired most present day Retrofuturism, but that is speculation.!
A matter a fact, a lot of Steampunk takes a lot of the Gothic and Geek subcultures. The Victorian and dark fashions have much of it origins in the Gothic while it's Futuristic and Fantastical elements are clearly inspired by Popular and Nerd Culture. Look up Steampunk and [Insert your favorite franchise here] on Google, and you almost certainly find a Retrofuturistic versions of your fictional characters. Even historical
and present day celebrities aren't safe from Steampunkification.
So, what separates Steampunk from the rest. Some would say it is the philosophy behind Steampunk that makes the difference. Were common design is focused on practicality, massproduction and mainstrain appeal, Steampunk is often bulky, handcrafted and tailo rmade to it's owner.

Fans, designers, cosplayers and tinkerers. The community is fun for the entire family. First it is important to realize that steampunk, as a community, is not limited to 'Just Steampunk'. It also includes other genres and styles that are inspired by History, classic Science Fiction, Dieselpunk, Fantasy and other Retro Futuristic styles that don't have their own communities or conventions. It also has a range of themes and subjects to be found for young and old, like love, war, horror and erotica.

The culture is very inspired by the English elite lifestyle and the Gentleman and Chap culture. There motives for doing so differ from person to person. There are stout conservatives and foolhardy anarchists within the culture. However politics are pretty much banned from the community, and that is the way the overall majority likes it. For the majority Steampunk is a hobby, passion or a creative vent. It's a way to get away from the stress of our daily lives. 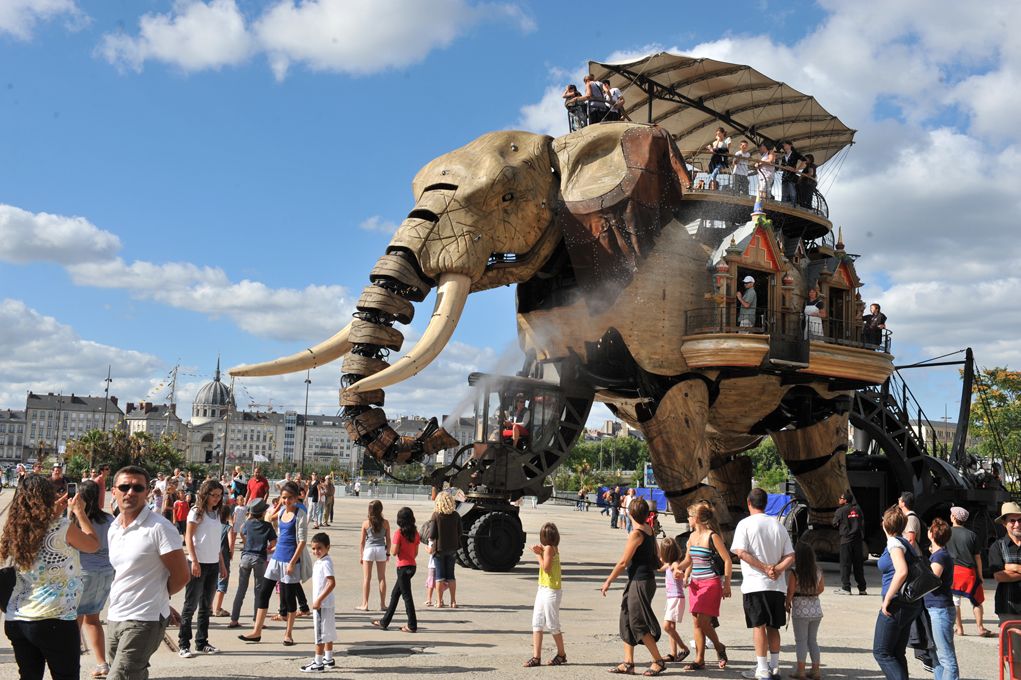 It also has it's own traditions, like costume- and buildoff contests, High Tea's, Teapot Races and Teadueling. Yeah, tea is kind of a mayor theme.

But Most of the community is centered around Do-It-Yourself (DIY) culture and a great respect for individual craftsmanship. Craftsman/Steammakers are the Rockstars of it community because they are the ones that make the Steampunk dream become a reality. Although most of their creations might be costume-props you'll find on any cosplay convention, somethings they create machines that will simply blow your mind like the selfproppeld villa Neverwas Haul or the giant Mechanical Elephant in the Entertainmentpark, Les Machines, in Nantes(France).

The growth of the Steampunk community since about 2008 is considerable. Almost for out of no were Steampunk took Conventions by storm. many considered it a fed and, 'people jumping on the bandwagon'. Something that was to be short lived like the popularity of Goth, and Emo. But those are still around, even if they are not as popular as they used to be. Eight years later, Steampunk still grows strong and doesn't seem to go anywhere soon. But why?

It's speculated that the timeless visuals of Steampunk and emphasis on moving parts captivate people in an age of massproduction and conformity. It is very similar to the Arte Nouveau movement that way. Steampunks love to make gadgets, like smartphones, their own and customize such devices in way it tells something about them. It's love for craftsmen-ship and personalisation of technology goes against the grain of a corporate society.
The Internet, and rise of social media, has made it far easier for makers to present and sell their creations. Crowdfunding has made it possible for studio's to get their Steampunk-themed movies and games done. All these factors contribute to the growing popularity of Steampunk as a phenomina in the early twentyfirst century.