Binary Stars, A Mystery Yet to be Solved

Man must rise above the Earth—to the top of the atmosphere and beyond—for only thus will he fully understand the world in which he lives.

We know that sun is the only star of our solar system and all the planets are orbiting around the sun. Now, is it possible that there is star system where there are two stars present or even more? Well, although it’s hard to think about this, cause it is counterintuitive but this kind of star system does exist. Now, the question that can arise is how do they orbit? How can they be stable?

The answer is, they orbit around their mutual center of mass because of their gravity. Center of mass is closer to the massive and far from the lower mass star.

BInary star system | source
Even it was proposed that our solar system is a binary star system. Approximately, half of the star systems around the sun is binary systems or multiple star systems, where there can be more than two stars. Although some of the stars are far apart from each other and we think they are not binary. But, when we investigate closely we see they are orbiting around a common center. In the naked eye, we can see that there are two stars who are so close but when we put a telescope we see they are far apart. They are called optical binary stars. There are different kinds of binary stars. I will try to give a good description of them in my text below. So, let us begin.

Ancient Indian people used to test someone's eyesight showing them two stars. These stars are so close to each other that most of the people couldn't detect them with their naked eye. They are known as Mizar and Alcor. They are the first ever known binary system. In modern days, we have very highly sensitive telescopes. Through these telescopes, astronomers discovered that Mizar itself is not a single star, rather a few stars orbiting each other. There are mainly four stars orbiting each other. It was also thought that Alcor is the fifth star of the system. But later it was found that Alcor is not alone, he has a companion too. This made them sextuplet. 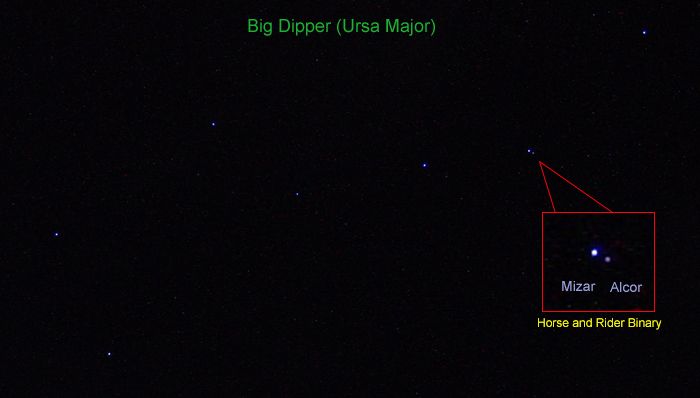 Galileo's student first noticed the binary system Mizar through a telescope. A week later he told it to Galileo. Galileo Included this in his paper as Mizar A and Mizar B. During the end of 19th century it was found that Mizar A itself a binary and beginning of 20th century it was found even Mizar B is also binary. Until now a lot of binary and multiple systems have been found.

Binary star formation can happen in the same way as single star formation. A vast cold molecular cloud can form a star. These clouds are made of dust and gas. As this cloud is so cold, it is so dense. So these gas and molecules come close together to form molecules and it gets even denser. Binary star formation |source
But after a critical temperature, it starts to heat up because of pressure and get denser in the center. As the center is denser than others parts it will break into fragments. This fragments can form protostars. These protostars can be captured by each others gravity and orbit around a common center of gravity and form binary or multiple star system. There are other ways of forming binary star system. Two single stars can be captured by each others gravity and form a binary system. Even one star can be spilled into two. Until now forming binary star has never been observed.These methods above are suggested by astrophysicists and they think this is how a binary system can form.

There are actually four types of vinary stars. They are --

We can observe them through visual observation. They are far enough to be observed visually. To observe visual binary stars, the observation should be long. As their orbital period can be from ten to thousands of years. Visual binary stars are made of two stars. One star can be brighter than the other. Sometimes it can be really difficult to separate one from the other if their difference in brightness is so much. But we can look through the telescope and find the center of mass around which the bigger star is orbiting. This is how we can separate one star from the other. The brighter star is called Primary star and the fainter is called comapainion. Visual binary stars are orbiting around each others mutual center of gravity. When they are far from each other the move slowly. When they come close they move faster.

Visual binary stars are separated by angular distance. So, telescopes with better resolution will find out more and more visual binaries.

When in a binary star system, two stars are so close or one is much brighter than the others, we can't separate them by telescopes. We use spectrometry to separate them. If the difference in brightness is so much, then we can get the spectra of only one star. We can see the blue or red shifted line. When the star is moving towards observer we see a blue shift and when moving away from the observer, we see a redshift.

But if the stars are of similar brightness. Then we can see the spectroscopic blue and red shift oscillating depending on the stars approaching and going far. If the angle between the actual orbit and the projection is zero degree, we can't detect them.

In a binary star system, the star's orbits can be so close that there happens eclipse. Like solar eclipses. They are called eclipsing binary stars. We use the light curve to identify them. Originally one of the stars is brighter than the other star. So, when the brighter star eclipses less bright we see dips in the spectra because the total light of the other star is eclipsed. When the less bright comes in front of brighter one, there are dips but is less than before. Studying the light cure we can determine the angle of the orbital plane, their period of revolution, the radius of each component, their temperature as well as their orbital orientation.

There are binary star system where the stars are so close to each other that they exchange mass. This kind of stars are called contact binary. Most of them are usually ecliptic binary star. If they get too close they can form a peanut shape. Let us think of two stars one is heavier blue star another is a red dwarf. Because of nuclear fusion the blue star will lose mass and as the red dwarf doesn't lose mass, it can swallow the mass of the blue star and get bigger and bigger and the blue star can transform into a white dwarf. Later again this process can go on. Is our solar system a star binary sistem

During the end of 20th century, some astronomer stared claiming that our sun has another companion. Its a red dwarf star which is still undetected. They named it Nemesis. Their theory was that it can explain a lot events like the extinction of dinosaurs. They even think that its orbit can hamper the Oort clouds. Today we have so much sensitive telescope and no stars like this even found still.

Learning about binary stars we can learn about a lot parameter of stars in the system like their mass, radius effective temperature etc. Especially contact binary stars are of special interest as there can happen so many astonishing events.

Please let me know through your comments and upvote, how did you like it or any suggestion. Until my next post --


Your upvotes ,comments keeps me going and i write so that people understand science so easily. So follow me to help me writing more content. Steem on people.

The thing that i like about your post is that it s full of difficult information, but easy to read and easy to understand. Good job, man. I really appreciate the effort you give. This kind of post deserve to be one of best!

Fantastically written post I must say so, but I have a question is there possibility for full exoplanet systems to exist around these binary stars. Mainly asking this as a binary star system would not be seen as a stable configuration. Often, I play elite dangerous and I see randomly generated star systems where it's a binary system with each star having their own exoplanets. Best way to describe it it's 2 solar systems orbiting a barycenter of their own, are these kinds of systems also possible and if so are there any examples of these discovered?

Yes they do exist, thank you for your comment. I appreciate it. I will follow you ,https://exoplanets.nasa.gov/news/163/frozen-world-discovered-in-binary-star-system/ . This is for farther reading .

Thank you very much,

I saw your profile and i m really very impressed with your blog. You are a great writer.

I am not, but anyway thanks.

I like your lines wich you wrote above your profile name

i kept my promise XD

Is our solar system a star binary sistem ? So thier theroy has not proven yet

Binary Stars, A Mystery not solved. but its solves in 2059

Your experience is great, I am proud to see your post that is so classy .. Sometimes I think want to like you but I can not make a post like you .. very genius in that case .. I am amazed at your intelligence.

Congratulations @rifkan, this post is the second most rewarded post (based on pending payouts) in the last 12 hours written by a User account holder (accounts that hold between 0.1 and 1.0 Mega Vests). The total number of posts by User account holders during this period was 4107 and the total pending payments to posts in this category was $12717.16. To see the full list of highest paid posts across all accounts categories, click here.

Great post @rifkan! You re like Sheldon from Big Bang Theory!
Now i know more about stars!
Have a great weekend!

Although i dont like Sheldon a lot as he talks too much. Anyway Thanks. I am happy to help @alexandraioana26

Sorry it was meant to be a compliment
:*

i know. I took it as a compliment. dont worry.